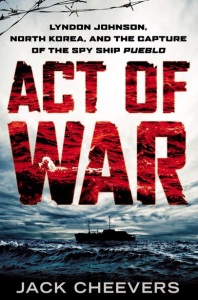 If South Koreans were pressed to identify the origin of America’s involvement in Korean affairs, most would likely ponder the question a few moments before pointing to the US role in liberating the peninsula from Japanese colonial rule in 1945. North Koreans, by contrast, would immediately single out 1866, the year that the armed merchant ship USS General Sherman approached Pyongyang on a mission to open Korea’s markets to international commerce, using force if necessary.

North Koreans learn in school that this gloomier incident—locals burned the vessel and executed its crew—marked just the start of a long history of American attempts to seize the peninsula. North Korea still portrays itself as a country under siege, and it doggedly searches for new means to highlight victories over the United States. Visit any North Korean museum built to commemorate the Korean people’s resistance to foreign aggression, and you will encounter a lengthy chronology of alleged US incursions extending from 1866 to the present.

The country reinforces that narrative in parks that display totems of its successful resistance to foreign encroachment. The most famous of these sites is in Pyongyang, on a bank of the Taedong River where the USS General Sherman allegedly ran aground. Items there include cannons said to have come from the ship, as well as a “spy torpedo” purportedly captured off the coast of Wonsan in the 1980s. Until two years ago, the centerpiece of this riverfront trophy collection was the USS Pueblo, a diminutive, undefended surveillance ship seized in international waters near the city of Wonsan in January 1968.

At its new home, a Potong River berth outside a new museum built in remembrance of the so-called “Fatherland Liberation War” of 1950-1953, the Pueblo remains a trophy of resistance. It is the crown jewel in North Korea’s collection of propaganda designed to justify the country’s hardships and convince its population of America’s hostile intentions. The boat is more than a historical artifact; it is central to North Korea’s state-sponsored mythology, and the subject of numerous government-authored movies and textbooks.

One would not know this by reading Act of War: Lyndon Johnson, North Korea, and the Capture of the Spy Ship Pueblo, a narrative nonfiction account of the Pueblo incident by veteran Los Angeles Times reporter Jack Cheevers. North Korea’s perspective on the capture and the episode’s immortalization in national lore are each largely absent, save for one brief chapter and the overview of the latest decade in the country’s history. Cheevers states that he does not seek to explain North Korea’s conduct, but his omission represents a missed opportunity in light of the enormous number of materials on the incident that have been declassified in recent years by North Korea’s former communist allies.

What one does find in Act of War is a gripping description of the vessel’s capture in January 1968, killing one man on board, and the US institutional and leadership failures that placed the unarmed, secret-laden spy ship in harm’s way to begin with. Books such as Mitchell Lerner’s The Pueblo Incident contain more thorough research of the episode, but history is often hard to sell if it’s complicated. Through his narrative nonfiction, Cheevers offers an accessible take on a subject typically confined to academic literature and participant autobiographies.

The engaging and well-framed account synthesizes academic findings with autobiographies from the ship’s captain, Lloyd “Pete” Bucher, and his executive officer Edward Murphy. Cheevers adds additional flavor by quoting from interviews with crew members, including ones conducted with Bucher before his death in 2004, and by citing a handful of recently declassified US documents. Despite claims by the author, though, these documents do not contribute significantly to the Pueblo incident’s historiography. While his materials add more texture, they do little to fundamentally change our understanding of how Johnson administration officials handled and mishandled the incident.

Washington’s controversial steps include its initial decision to send the Navy electronic surveillance vessel close to the coast of North Korea, which was already on high alert after a botched attempt days earlier to assassinate South Korea’s president. The undefended boat contained top-secret cryptographic materials and encryption equipment it was unprepared to destroy in a crisis, and Cheevers deftly explains how the classified material’s seizure damaged US interests far more than Johnson officials had initially anticipated. The journalist’s use of new documents perhaps adds more where he examines potential actions the administration had weighed taking—if even momentarily—in response to the vessel’s capture.

Cheevers weaves a riveting description of the 82 surviving crew members’ eleven months in captivity, which ended only after the US government admitted harboring hostile intentions toward North Korea. His account is rich in human drama, and provides deep accounts of the bonds that sustained the former shipmates. He describes the physical and psychological tortures they faced, including sleep deprivation, willful malnutrition, and threats of execution. He also demonstrates how small acts of resistance by the crew members, and often by Captain Bucher himself, yielded minor-but-meaningful victories over their captors that boosted their morale over the course of their detention. These well-known exploits included flashing the “Hawaiian sign of peace” to North Korean minders, until the guards discovered the true meaning of the middle-digit gestures. Such details are not new, though, and they receive just as much attention in the memoirs of participants and in Lerner’s groundbreaking book on the Pueblo. But Cheevers also carries the crew members’ saga beyond their release, covering an emotional and unpopular Naval Court of Inquiry review of their actions during the incident, and Washington’s eventual reversal of a decision not to honor them as prisoners of war.

The author’s commendable coverage of the incident’s American dimensions makes his underdeveloped treatment of North Korean perspectives all the more noticeable. In recent years, several thousand pages of documents from the archives of North Korea’s present and former communist allies have been obtained, translated and released online by the North Korea International Documentation Project at the Woodrow Wilson International Center for Scholars. Cheevers consulted relatively few of these materials, though they have already yielded significant insights about North Korea’s actions, its external security environment and domestic politics when the incident took place. Unfortunately, Act of War acknowledges almost none of these new findings in the single, brief chapter it devotes to them.

The diplomatic record of North Korea’s present and former communist allies reveals that international conditions in the 1960s were unstable and deeply unfavorable to the country’s leadership. The ongoing Sino-Soviet split continued to divide the socialist camp as the US increased its presence in Vietnam. The Chinese Cultural Revolution threatened to spill over North Korea’s borders, and Pyongyang’s relations with Beijing became acrimonious. North Korean leaders also remained unsettled by the anti-communist military junta in South Korea and its normalization of relations with Tokyo three years earlier.

About five years before the Pueblo crisis, Pyongyang had stirred domestic controversy with its response to external security conditions that Kim Il Sung considered to be deteriorating. The government scrapped earlier plans to re-orient industrial development toward the construction of light and consumer goods to improve living conditions for the North Korean masses, and instead adopted the ‘Byungjin Line,’ which called for simultaneous development of its heavy industries and the national defense sector. By late 1966, leading cadres had begun to criticize the continuation of this policy and call for an immediate improvement of living conditions, threatening Kim’s national security doctrine. His regime purged its internal critics in 1967, and Kim launched the so-called Monolithic Ideological System, ushering in an era of absolutist control. Meanwhile, with the external security environment remaining unstable, he continued the country’s relentless pursuit of industrial development and self-reliance in national defense.

The material overlooked by Cheevers includes documentation shedding light on possible North Korean motivations for seizing the USS Pueblo. The materials reveal how North Korean government personnel portrayed the incident to other countries in the fractured socialist camp, as well as reactions by Soviet, Chinese and other communist officials to what they (and Moscow in particular) saw as a reckless decision to seize the ship and provoke the United States. Former communist bloc records also reveal how seriously North Korea took the prospect of US retaliatory action, as revealed by its evacuation of Pyongyang, the construction of bunkers and fortifications throughout the country, and its calls for foreign diplomatic officials to withdraw their non-essential personnel.

It would be inappropriate to elaborate on the substance of these additional documents in this review, but some of their contents would have made a welcome addition to the literature on the Pueblo incident while presenting a much fuller account of the affair. While the omission of these new findings on North Korea is regrettable, Act of War is still an engaging and emotional read, and a well-executed synthesis of existing academic research and autobiographical accounts of institutional leadership failures in the Johnson administration. It pays adequate tribute to the unspeakable horrors endured by the captive crew, as well as the travails that awaited them back home.