It is understandable that press speculation is growing about what is going on at the Sohae Satellite Launching Station (Tonchang-ri) given the buzz about a possible space launch in October on the 70th anniversary of the founding of the Workers’ Party of Korea (WPK). The ROK Ministry of Defense and others are feeding this speculation.

A case in point is a recent article from The Japan Times, quoted diplomatic sources that “U.S. intelligence agencies, believe,” that North Korea has [installed] a cover over the launch pad [at Sohae] in “an attempt to evade surveillance by spy satellites.” It also mentioned a roof that has been constructed covering the rail spur that trains carrying missile containers.

Without seeing the imagery that US intelligence agencies refer to, its hard to figure out if there is a new development or, alternatively, whether reporters or their sources are confused about what is new and what isn’t. There hasn’t been a new commercial satellite image released of the launch pad at Sohae in over a month.

The absence of new imagery leaves many to rely on news reports based on leaked information from unnamed government sources that are open to wide variation of interpretation. Even though imagery is imagined to be “hard intelligence,” the meaning of an object in a new satellite image is often debated.

Given these media reports as well as publicly available information (which may be more limited than classified information only available to governments), what is probably going?

First, it is worth noting that if these reports are referring to a cover over the launch gantry at Sohae, that’s not news. 38 North has previously reported (in August 2014, October 2014 and May 2015) the presence of an environmental cover attached to the launch tower swing arms that protects the launch vehicle from the effects of humidity and temperature before launch.

Figure 2. Close up of the environmental shelter over the swing arms of the gantry.

Nathan Hunt has created an excellent 3D panorama of the Sohae gantry showing how the swing arms move.

[pano file=”https://www.38north.org/wp-content/uploads/panoramas/SohaePano2014_0723/Orbitview.swf”]
Click on the navigation buttons to explore the site and change angles. Panorama may take several minutes to load depending on internet connection, and requires Adobe Flash Player to view.

The movable platforms swing open like clamshells to allow the missile to be moved into place and then swing to enclose the missile in an environmental shelter to protect it from the effects of dust, rain and temperature. This shelter has the added effect of concealing the space launch vehicle (SLV) from overhead observation by satellites. This might be what the unnamed diplomatic source was referring to.

But it is also worth noting that the environmental cover has also been present at the launch pad at times when there is no sign of an imminent launch. That certainly seems to be the case currently. An SLV is certainly not on the pad and commercial satellites have yet to detect any preparations for a launch. That may change when we get the next batch of imagery but for now that’s the situation.

The “cover” that The Japan Times article refers to is probably the shelter concealing the rail spur that receives trains carrying missile containers. This development was first analyzed in a 38 North report in July. 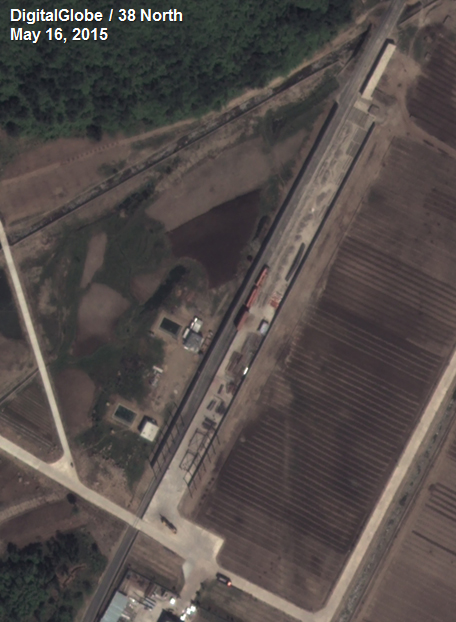 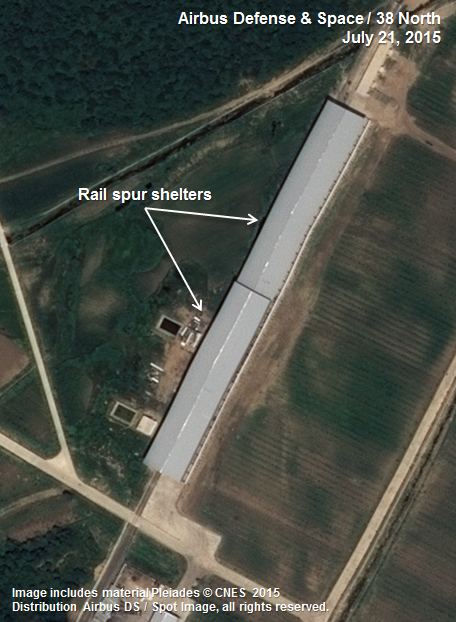 It is true that this shelter covering the rail spur at Sohae prevents the observation of missile-related rail cars and missile shipping containers. These camouflage, concealment and deception (CCD) efforts are commonly used by other countries—for example China and Russia—to limit the amount of valuable information that can be gathered by observing the size, shape and distinctive features of various rail cars. The presence of missile-related rail cars at launch sites as well as at manufacturing and development sites allows analysts to make inferences and associate the relationship each facility has to a particular program.

Figure 5. An example of a concealment shelter above the rail-to-road-transfer-point at the Tzu-Tung High-Explosives Fabrication & Test Complex in China.

The bottom line is that it is true that North Korea appears to be wrapping up a number of construction projects at the Sohae facility—for example the shelter covering the rail spur, an underground rail tunnel leading from the station to the launch pad and a movable platform on the pad designed to transfer the rocket stages to the gantry—all are intended to make it harder for satellites to observe and analyze what is going on. But these activities have been ongoing for some time and in no way indicate whether a launch is imminent or will take place in October.