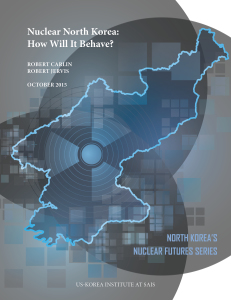 Much of the academic literature and policy thinking about proliferation makes the simple distinction between nuclear and non-nuclear states. This distinction is enshrined in the Nuclear Non-proliferation Treaty (NPT). But it is clear that while there is a nuclear threshold, not all states that have crossed it are equal, and it is hardly counterintuitive to suggest that the quantity and quality of states’ arsenals are likely to affect their behavior or the behavior of others toward them.

The DPRK’s nuclear arsenal will almost certainly grow over the next five years, and delivery capabilities are likely to improve. What concerns most observers is the possibility of increasingly reckless North Korean behavior—i.e., dangerous action as opposed to simply heightened rhetoric.

This paper seeks to examine how North Korea’s behavior would be impacted by their growing nuclear arsenal.

Download the report, “Nuclear North Korea: How Will It Behave?” by Robert Carlin and Robert Jervis.