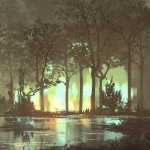 “I’m surprised.” Inspector O looked up from his newspaper. “Your hair isn’t even mussed.” He made it sound like an indictment.

I stood in for a moment wondering what this might portend before sitting down on the bench. The park was deserted.

“A reference to younger analysts, I suppose. I do not partake. Too old.”

O nodded. “Old age hath yet his honour and his toil.”

I stared at him. He put down the newspaper and met my gaze.

“I know,” he replied. “You want the part about smiting the sounding furrows?”

I shook my head. “No, instead why don’t you tell me why you called a meeting in such a desolate place on such a shrouded morning. God only knows.”

A silence filled the foggy air.

“Before I forget,” I said finally and reached into my briefcase, “I have a medal of excellence for you to pass on to your National Defense Committee.”

O looked toward a clump of trees, trembling aspens, down the path by a stream that marked the edge of the park. “I do not like it when you hand me things. You aren’t going to give me a bible, I hope. It’s bad enough I have to read the speeches from your State Department.”

“No, I only meant it was a medal in a metaphorical sense. Actually it’s a verbal bouquet. The quotation is here, somewhere.” I dug through my papers. “Do you have a new writer at the NDC? I nearly got a hernia wading through the images.”

“The other day,” I said, “there was an NDC statement, something warning Washington to shape up. It had this lyrical line in it. Here, I wrote it down so I wouldn’t forget.”

O recoiled slightly as I proffered the piece of paper. “I told you, don’t hand me things. Just read it.”

“Something the matter?” I looked toward the aspens, but there was nothing that I could see, so I cleared my throat and proceeded to read:

In this vast expansive current, both the Yankee-style mentality—that those who obey them will prosper and those who defy them must fall—and the heinous ambition aimed at reigning over the world have been cast adrift like the fallen leaves of late autumn, and the blood-red sunset of doom, which is reminiscent of the end of the ancient Rome, is hanging heavily over the United States.

O closed his eyes, now visibly relaxed. “Yes, that’s good, isn’t it? We’re jazzing things up. Your official statements are boring, the Chinese are even worse. It’s been decided upstairs,” he paused and pointed upwards, “that we might as well add a touch of class to these exchanges since they aren’t going anywhere anyway. Some people even wanted to put something in about floating down the river of death, but I told them it was too much so they took it out.”

“You have that much power? I hadn’t realized.”

“I know the writer. We bowl together.”

I smiled. O smiled back.

“Would you mind,” I broke the silence, “if I asked again why we’re here? It’s a long drive back to the airport.”

Inspector O paused. Again he looked toward the aspens. “Three-eleven,” he said finally.

“My people are puzzled.”

“Puzzled? Why? Isn’t it clear what you stirred up with that fourth nuclear test?”

“That’s my point. It was the fourth test, the fourth in a series. What made it so different from the third, or the second, or even the first? After the first test, you may recall, your man even hurried to meet with us.”

“That was then. This is now. You’re not looking at it the right way.”

“And that would be?”

“Fed up. Straw on the camel’s back. One step too many.”

O shook his head. “Too late for such complaints, much too late. You should have thought about that in October 2002.”

“Right. Gone but not forgotten. Throw a rock in a pond and guess what?”

“You get a nuclear arsenal?”

He closed his eyes again. “Kang Sok Ju died, did you notice?”

“One more tall tree felled. Soon we’ll each be left with what? Trembling aspens and scrawny pines.”

“You still have a few trees as far as I can tell.”

“Yes, and don’t waste the opportunity. I’m warning you, if you cut the ground from under them one more time, we really may end up like fallen leaves.” From his pocket he took a small folding knife and cut a piece out of one of the bench’s wooden slats. “My Swiss army knife. I got it in Geneva. We’ll never get back to those days will we?”

I shook my head.

“No, not Trump, although you were wrong on that. Admit it.”

“OK, I admit it. So what could be worrying you more than Trump?”

“Your Patriot Act. The Treasury boys can’t reel it back in. There was some room to maneuver before. Now? Nothing.”

“Well, that’s the point, isn’t it? That’s what they want. They want you to think there’s no exit; that you can’t wriggle away. This time it is the river of death, and it’s your problem if it carries you away.”

“That’s what you think?” He put his hand on my shoulder. The gesture startled me. He hadn’t done anything like that before. “No,” he said, “it’s your problem.” He looked me square in the eye and spoke slowly. “You don’t know how bad things will get.”

“I guess next you’re going to tell me.”

He took a breath. “Listen to me. There is a feeling you have pushed things over the edge, you and that crazy woman. All you had to do was pay attention to the speech at the party congress last month. Would that have been so difficult? To wait until you had looked at the speech?”

“Tell me when we have ever bothered to pay attention to what you say.”

“You seem to do that whenever we say we are a nuclear weapons state.”

“Right. Then the mental gates clang shut. After that, all we want to hear is you crying ‘uncle.’”

He jumped up from the bench. “Don’t bring up Jang!”

“No, relax, sit down, will you? It’s a phrase. It means you surrender.”

O looked at me. He laughed, a low throaty laugh at first, then it built until he was hopelessly out of breath, tears streaming down his face. “Uncle, uncle,” more laughter. He walked around the bench, put his hands on his hips, and looked at the mountains. After a minute or so, he sat down again. “This is why I enjoy talking to you, Church. If nothing else, in the darkest days, you make me laugh.”

“Neither am I. Notice how quiet it is?”

“I’m not talking about here, in your magical land. I mean over there,” he gestured westward. “I mean across the ocean. There was an incident in the West Sea the other day. Did you see how we handled it?”

“No, not routine. In so many words this time we said we knew the South was trying to provoke us into an overreaction so it could start something, but we’re not that stupid. We’re not, you know. We’re not stupid.” He lowered his voice. “Why won’t they reply to the offer for military talks? What’s so hard about doing that?”

“Now is not the time for dialogue.”

He folded his newspaper, and stood up. “Colorado, nice place.” He looked toward the mountains. “Over yonder,” he indicated a meadow in the distance, “the deer and the antelope are paid.”

By the time I called out, “Play!” he’d disappeared behind the stand of aspens, their leaves trembling in a wind only they could feel.