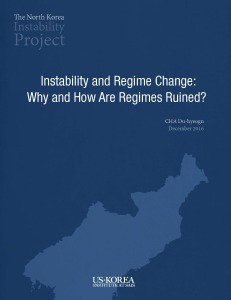 Despite expectations from many observers that the North Korean regime would collapse after the Cold War, it has survived two leadership changes, decades of international sanctions and economic crises. Even as other authoritarian regimes have collapsed or are struggling with political and social upheaval—seen most recently in the wave of protests and popular revolutions that brought down long-standing dictators in the Middle East and North Africa—Pyongyang continues to remain relatively stable.

This paper explores the various factors influencing state instability and regime change as well as the typical outcomes of political upheaval in order to draw conclusions about the future of North Korea and how, despite its current durability, a regime change scenario might play out.

Download the report “Instability and Regime Change: Why and How Are Regimes Ruined?” by CHA Du-hyeogn.