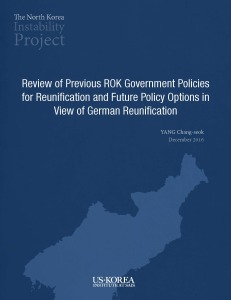 Despite many differences between Korea and Germany, it may be useful to draw lessons from Germany’s reunification for several reasons. First, it was a peaceful process without any bloodshed. Second, it was democratic and legally pursuant to the West German constitution. Third, the dictatorial communist regime with a planned socialist economy in East Germany, the same Soviet model as North Korea’s, collapsed. The East German parliament, born through the free general election of March 1990 decided that the five East German states would enter the Federal Republic of Germany (West Germany) with a full-fledged democracy and a market economy. Fourth, 25 years after reunification, Germany is much better off than when it was divided, and is now playing a leading role in Europe.

This paper examines the potential lessons that can be drawn from the German case before conducting a comprehensive review of the reunification policies of past South Korean governments. Based on this analysis, it concludes with policy recommendations for the peaceful reunification of the Korean peninsula.

Download the report “Review of Previous ROK Government Policies for Reunification and Future Policy Options in View of German Reunification” by YANG Chang-seok.