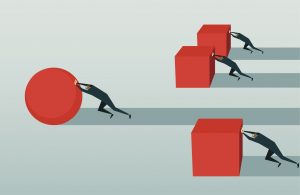 In Part I of this series, I argued that advocates for “getting tough on North Korea” were prone to adopt inappropriate models for a harsher sanctions regime and to ignore the risk of counterproductive North Korean reactions to such sanctions. This is not an argument for no more sanctions. Given North Korean progress on its ICBM and nuclear weapons capabilities, we remain in an ongoing cycle of actions and reactions that may lead to a major war. A very vigorous political/military effort to contain and eventually eliminate the DPRK nuclear threat is essential now before the tensions and ill-considered rhetoric once again create the risk of the US and North Korea bellowing and stumbling their way into a catastrophic conflict. But sanctions should be only one element of the effort. The final push for a stabilization[1] of the North Korean nuclear and missile issue has to include the following components.

The additional deployment of significant and visible assets would make it clear to the DPRK that it cannot compete with the US in the nuclear field regardless of the size, scope, pace and duration of that effort. What sort of deployments (strategic systems, missile defense, precision strike conventional weapons, conventional land, sea, special and air forces) would be a function of both military and diplomatic would need to be hammered out in the National Security Council and with regional allies. The purpose of these forces would be both to provide diplomatic leverage and to prevent Kim from believing a military gamble would pay off.

The sanctions campaign should begin with the enforcement of UNSCRs 2270 and 2371. The initial goal would be to get full compliance with some of the difficult-to-enforce provisions, notably the caps on joint ventures and on North Korean labor exports. To this end, the US should target secondary sanctions on Chinese and other third country entities that are violating the UN resolutions. Rather than seeking to squash every sanctions-evading gnat, it should inflict significant pain on one large and vulnerable entity to have a bracing effect on many more. And, it might well create massive ripple effects if it is a key node in North Korea’s sanctions evasion network—for example, Chinese companies outlined in the recent C4ADS report—that are clearly violating UN sanctions and making extensive use of the US banking system. The US may also wish to find a similar target outside the Chinese network of businesses—perhaps one in a friendly Middle Eastern or African country that has chosen to ignore past US efforts to cut connections to Pyongyang. The US should for now avoid steps to coerce others to accept its own definition of sanctions that go beyond the resolutions. It appears that the most recent sanctions by the US Treasury against Chinese, Russian and one Namibian entity, as well as a recent freeze on some aid to Egypt, may fit the model described above.

However, it is unlikely the UN sanctions as currently written will suffice. The US should be building the case now for significant sanctions tightening if North Korea does not shift its current direction. This should best be done in steps, perhaps starting with the change of the labor and investment caps and moving to a full ban as a first iteration with the dusted off version of UNSCR 661 as the final alternative to military conflict. As the risk of conflict moves closer, the US will have to consider when secondary sanctions as a coercive mechanism for third countries needs to be deployed more widely. This is a high-risk enterprise in an already risky situation, but when stacked up against nuclear war in Asia, surely secondary sanctions are preferable.

Many Tracks of Diplomacy

These tough military and sanctions components will do nothing but open the door to miscalculation and war if other “softer” components are ignored or—more likely—mishandled. A stabilization of the Korean nuclear and missile issue is going to require multilateral diplomacy—and only the US has the ability to be at the center of this effort. It cannot subcontract the effort primarily to China. The PRC does not have the entre with some of the players, nor could it speak for the US to the most difficult audience of all: Pyongyang. These rings of diplomatic activity have existed in one form or another for many years, but they will need to be greatly invigorated and placed in the service of a clear set of policy objectives. These rings include:

Orchestrating this diplomacy will be one of the most complex challenges of the past 50 years. It is unclear whether the US State Department—suffering from several levels of missing leadership, low morale and persistent and unhelpful interference from the White House—is up to the task. But a way will have to be found to perform it if there is to be success on this issue.

US diplomacy during the recent dust-up with North Korea over its July ICBM tests was clumsy and amateurish: the incendiary rhetoric coming out of the White House needlessly escalated tensions and the uncoordinated and incoherent public messaging sowed confusion among our allies over US goals and intentions. That said, it did signal that the United States was approaching the limit of its patience over North Korean missile developments. Nevertheless, a policy vacuum continues to exist.

The United States has not made clear to Pyongyang, the American public, or its allies how it would respond to North Korean nuclear intimidation or aggression. There may be a place for strategic ambiguity in deterrence policy under some circumstances but not strategic incoherence. As a result of the loose and imprecise US rhetoric and mixed messaging, all parties are groping for an understanding of what might trigger nuclear conflict in Korea and beyond. To end this confusion and uncertainty, an authoritative figure such as the Secretary of State or Defense should give a policy speech which lays out for the American public, our allies, the Chinese and the North Koreans what American nuclear deterrence policy is vis-a-vis North Korea—and then the White House needs to discipline itself and other agencies to hew scrupulously to this script in all their public messaging on the policy.

The speech or the press backgrounding around it should also designate a single, high level official who would be accountable for the North Korean issue; this is simply not an issue that can survive current White House tong wars, presidential pique or bureaucratic backstabbing. This speech will also be the best place to signal that toughness will be accompanied by dialogue. It needs to open the door to real negotiations with a concrete proposal. This could be done through a proposal to reopen Six Party Talks or through a prearranged signal to Pyongyang that certain words in the speech are an invitation to a private authoritative back-channel discussion.

The Obama administration’s efforts on North Korea foundered on a couple of rocks. The first was its inability or unwillingness to commit political capital to an issue that was highly controversial, with a very small (or nonexistent) solution set and a timeline that was less pressing than the Iran nuclear issue. The second was that the only goal for resolving or even trying to resolve the crisis that could garner consensus support was complete DPRK denuclearization. However, given the Obama administration’s unwillingness to invest fully in the issue, the White House’s highly constrained room for political maneuvering and Pyongyang’s commitment to its nuclear strategy, the goal of denuclearization became an obstacle to even starting a process for dealing with Pyongyang’s nuclear and missile progress.

Denuclearization remains a worthy goal and it is the only one that preserves the global nonproliferation regime and the long-term security of the US and its allies. But the first goal of renewed diplomatic engagement needs to be more focused and urgent: to stabilize peace in Northeast Asia and to prevent a stumble into a nuclearized second Korean War. Achieving this goal, by definition, will require North Korea to put limits on its ICBM program, which is the essential immediate need for American security policy. There are interim steps that would be of value in preserving peace and security. The parties might wish to develop mechanisms to prevent accidental war. It might also be a worthy tactical goal to create geographic limits on North Korean missile testing targets, thus putting US territories like Guam and Japanese waters off limits. The US might, at some point, trade off a particular sanction in return for a firm ICBM testing ban or moratorium or a halt to nuclear tests.

At no point should the US take ultimate denuclearization off the table, but it is necessary first to identify immediate steps to stabilize what is a dangerous dynamic. The two great dangers to pursuing more modest, immediate goals will be the accusation the US has “accepted” a nuclear DPRK and the concessions the DPRK may want. Sanctions should be considered legitimate items to trade. Our alliances should not. Our political relationship with the DPRK—including at some point a peace treaty ending the Korean War—should be legitimate points of discussion. Tangible payments to the DPRK should not, given the unfortunate experiences the ROK and US had with such payments in past agreements.

In a policy with any hope of resolving US and global concerns about North Korea’s nuclear and missile threat, sanctions play an important but supporting role. The key to a successful effort to deal with the North Korean threat without war is a combination of military deterrence, sanctions, a complex diplomatic offensive with clear and realistic short-term goals, and perhaps most importantly, a disciplined, clear public elucidation of US deterrence and diplomatic policy for Korea. The “tough” part of this approach (military deterrence and sanctions) is well within the reach of the Trump administration. Whether it has the personnel, structure and capacity for discipline for the diplomatic and public components of the effort is yet unproven.