At various times over the past few weeks, US President Donald Trump and other members of his administration have threatened to use military force to prevent North Korea from conducting additional nuclear or ballistic missile tests. The US carrying out any military option raises a significant risk of military escalation by the North, including the use of nuclear weapons against South Korea and Japan. According to the calculations presented below, if the “unthinkable” happened, nuclear detonations over Seoul and Tokyo with North Korea’s current estimated weapon yields could result in as many as 2.1 million fatalities and 7.7 million injuries.

Since 2011, North Korea has conducted 98 ballistic missile tests, which have resulted in more capable missiles, larger payloads, longer ranges and presumably increased reliability. During the same period, they conducted four underground nuclear weapons tests [2] [3], the most recent on September 3. On July 4 and July 28, 2017, North Korea tested for the first time, an intercontinental-range ballistic missile (ICBM), capable of reaching most of the USA [4]. Expert analysis suggests that the North has the capability to arm ballistic missiles with nuclear warheads and has a baseline nuclear arsenal estimated at around 20 to 25 nuclear warheads with yields in the 15-25 kiloton range [5]. The September 3 nuclear test was likely a thermonuclear device with estimated yields between 108 and 250 kilotons [3], suggesting that North Korea’s nuclear arsenal could eventually be upgraded to consist of larger yield thermonuclear weapons.

The goal of the North Korean regime seems to be ensuring the continuation of the Kim family rule by having a viable nuclear deterrent capability against the United States [6]. However, North Korea’s continued missile development and nuclear capabilities are perceived as “provocative and destabilizing” and posing a significant security threat to US allies—South Korea and Japan—US assets in the Asian theatre and the US homeland [6]. Multiple sanctions imposed on North Korea by the United Nations, the United States, South Korea, Japan, and the European Union have not deterred the North from further WMD development [7], despite growing condemnation from the international community. Even China, traditionally North Korea’s staunchest ally and primary trading partner, has criticized North Korea’s continuing nuclear weapon and missile development programs, reduced some trade with North Korea, and has made it clear that if a conflict should break out on the Korean Peninsula that North Korea is “on its own.” [8]

In addition, the United States and its allies, in response to North Korea’s missile deployments and continued testing, have looked to bolster their defenses. The Terminal High Altitude Air Defense (THAAD) system has been deployed in South Korea [9]. Japan has selected the Aegis Ashore ABM system [10]. The United States has also tested the Ground-Based Midcourse Defense (GMD) anti-ballistic missile system (ABM) against an ICBM package and is increasing the number of GMDs deployed to 44 by the end of 2017 [11].

If the status quo is unacceptable and diplomacy has been ineffective, then at what point do military responses become probable?  The tension between North Korea, its neighbors and the United States are now extremely high, antagonized further by bombastic exchanges between the US and DPRK during the United Nations General Assembly meetings and continued tweets from Trump. History is replete with “rational actors” grossly miscalculating, especially in crisis situations. It is possible that another North Korean nuclear test—especially if detonated in air or under water—an ICBM test, or a missile test that has the payload impact area too close to US bases in Guam for example, might see Washington react with force. This could include such options as attempting to shoot down the test missiles or possibly attacking North Korea’s missile testing, nuclear related sites, missile deployment areas or the Kim Regime itself. The North Korean leadership might perceive such an attack as an effort to remove the Kim family from power and, as a result, could retaliate with nuclear weapons as a last gasp reaction before annihilation. Therefore, it is worth reviewing the consequences if the “unthinkable” happened.

Let us assume that North Korea has 25 operational nuclear weapons and that when under attack, it decides to launch its entire arsenal against both Seoul and Tokyo. The warhead yield ranges from 15 to 250 kilotons (current and possible future capabilities) and are timed for airburst at optimal altitude. Based on these assumptions, seven scenarios were run, one for each of the seven different warhead yields.

There are dozens of variables in calculating the potential effects of nuclear detonations on population centers. One can run countless simulations with many combinations of these variables with a wide range of results [12]. For simplification purposes, the calculations in this simulation are based on traditional population vulnerability due to blast overpressure [13]. The blast areas for the seven weapon yields were calculated using the Nuclear Bomb Effects Computer [14].

Based on these assumptions, the number of casualties expected from a single reliable 250 kt warhead airburst over the centers of Seoul and Tokyo is as follows [18]:

The following maps show the various blast overpressure areas from the 250 kt detonations. 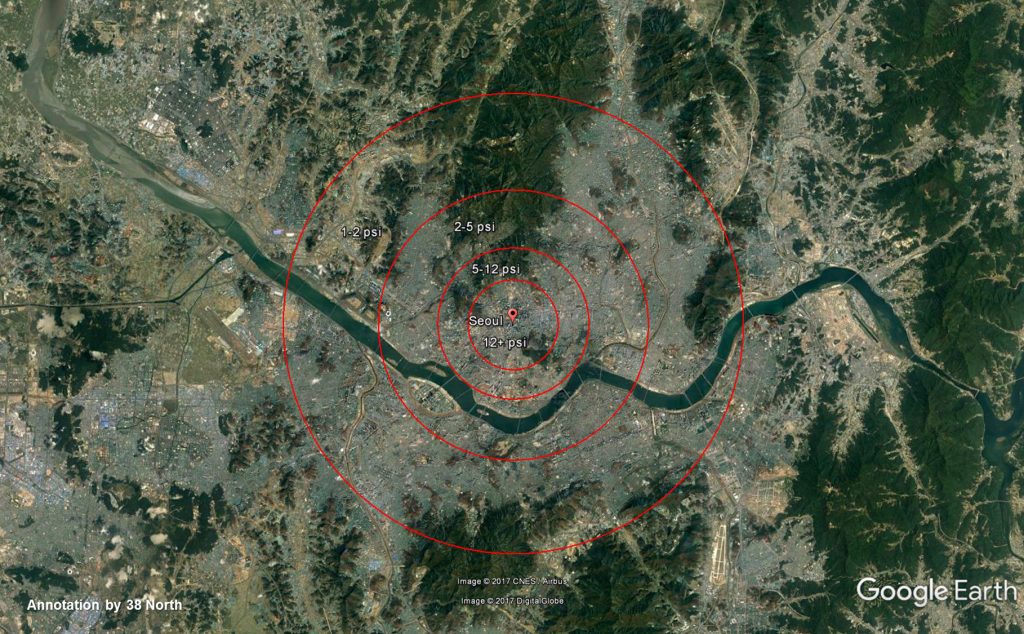 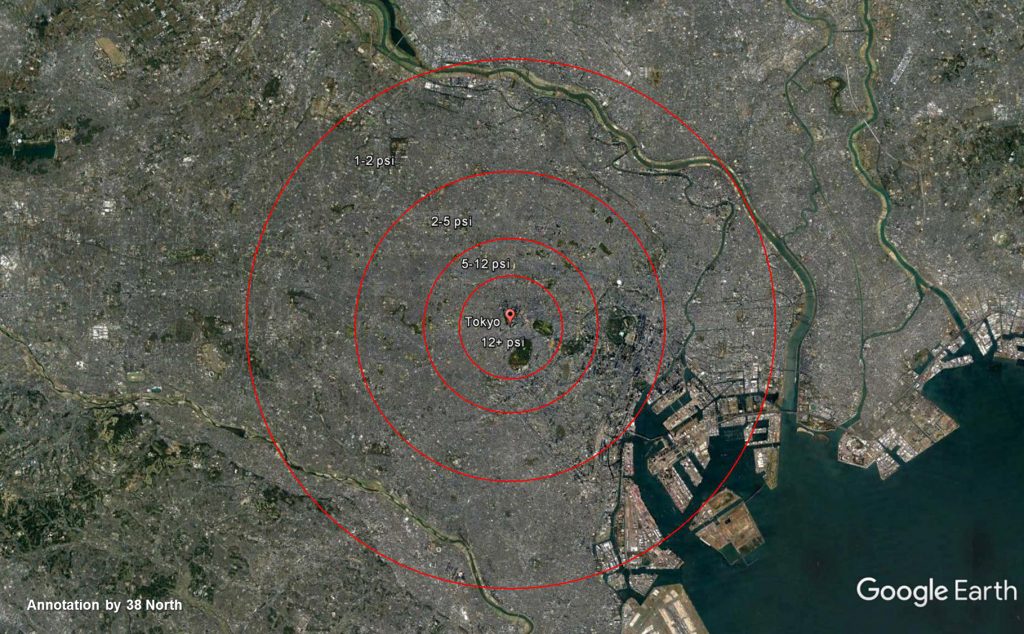 Naturally, no missile system is 100 percent reliable. The US Minuteman III ICBM, the most tested missile in its arsenal, is listed as having a test reliability of nearly 100 percent [19]. However, as with all weapon systems, its operational reliability is probably less. Moreover, South Korea has deployed one THAAD battery to help protect against a North Korean missile attack and Japan is in the process of acquiring the Aegis Ashore ABM system. Therefore, not all 25 North Korean nuclear missile warheads will detonate on their targets. Three levels of probability of detonation were used in calculating casualties: 20, 50 and 80 percent.

The following graphs show the results of these calculations. The data tables for these graphs can be found in the reference section [20]. These casualty numbers are estimates based on narrow assumptions.

Figure 3. Casualty estimates for Seoul at varied yields and probabilities. 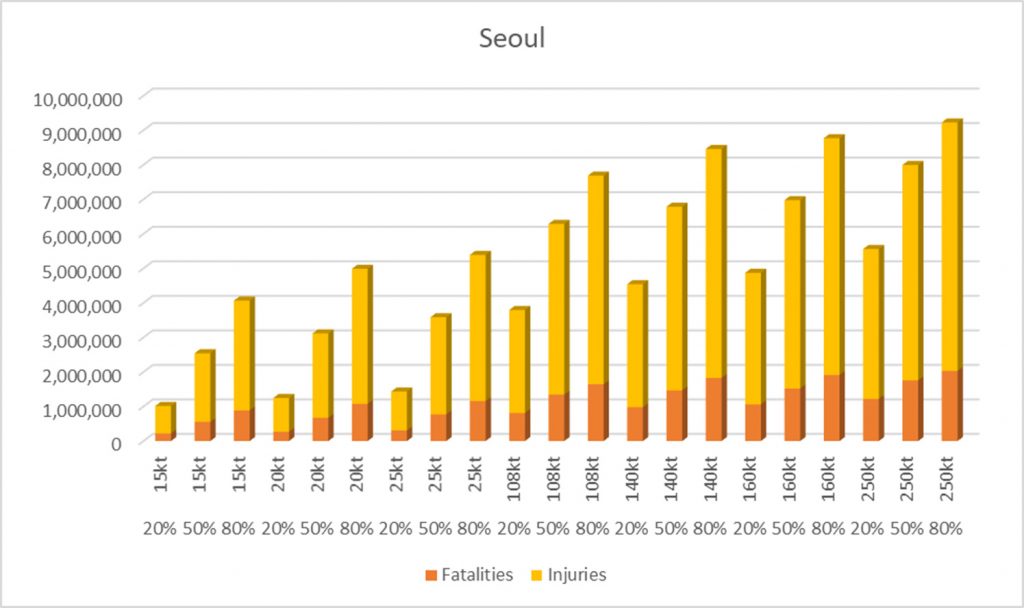 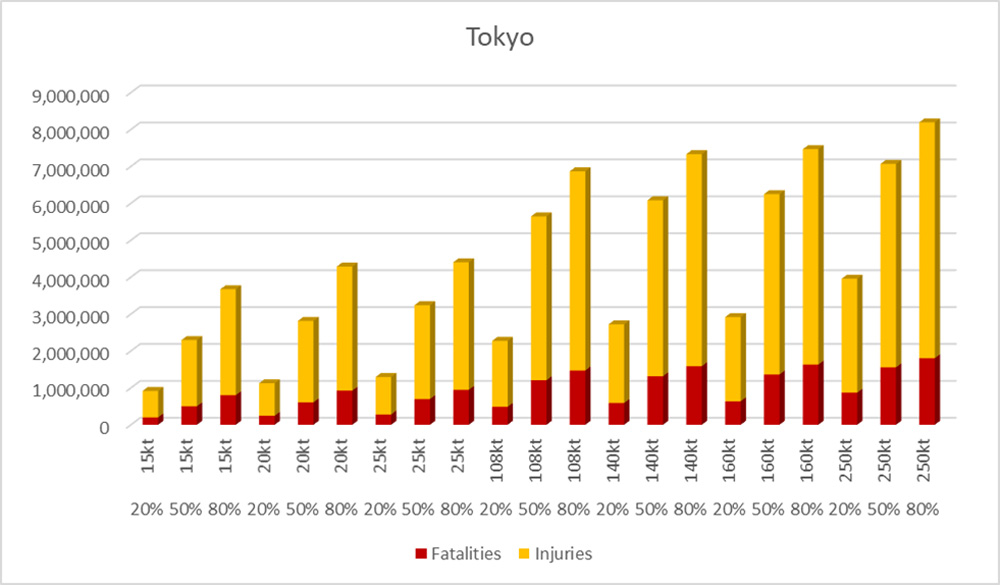 Figure 5. Combined casualty estimates for Seoul and Tokyo at varied yields and probabilities.

During the 1950-1953 Korean War, South Korea’s civilian casualties were probably on the order of 373,599 fatalities and 229,625 injured, with 387,744 abducted or missing [21]. Japan is believed to have suffered 500,000-800,000 civilian deaths during World War II [22]. The population densities for both Seoul and Tokyo are far higher today than they were during the 1940s and 1950s. Multiple nuclear weapon detonations on both Seoul and Tokyo based on the current North Korea yield estimates could result in anywhere from 400,000 to 2 million deaths. With possible thermonuclear yields with the same number of weapons, the number of deaths could range between 1.3 and 3.8 million.

[2] Jeffrey Lewis, “Why Is North Korea’s Fifth Nuclear Test Different From Its Other Tests?” The Atlantic, September 10, 2016, https://www.theatlantic.com/international/archive/2016/09/north-korea-fifth-nuclear-test-kim-jong-un-why/499490/.

[7] For examples of sanctions against North Korea see: https://en.wikipedia.org/wiki/Sanctions_against_North_Korea.

Source: The Effects of Nuclear War – Office of Technological Assessment, Congress of the United States, May 1979. Figure 1 – Vulnerability of Population in Various Overpressure Zones, p. 19.

[19] “Minuteman III,” https://missilethreat.csis.org/missile/minuteman-iii/. Missile Reliability = Countdown/Launch + Boost Phase + Separation of warhead(s) from booster or warhead “bus” + Penetration (thru defenses) + Detonation. If a missile has a reliability of 96% for each of these phases its overall reliability would be 82% (.96^5). Also see: Warner R. Schilling and Lynn Etheridge Davis, “All You Ever Wanted To Know About MIRV and ICBM Calculations But Were Not Cleared To Ask,” Journal of Conflict Resolution, Vol 17 Issue 2, 1973. 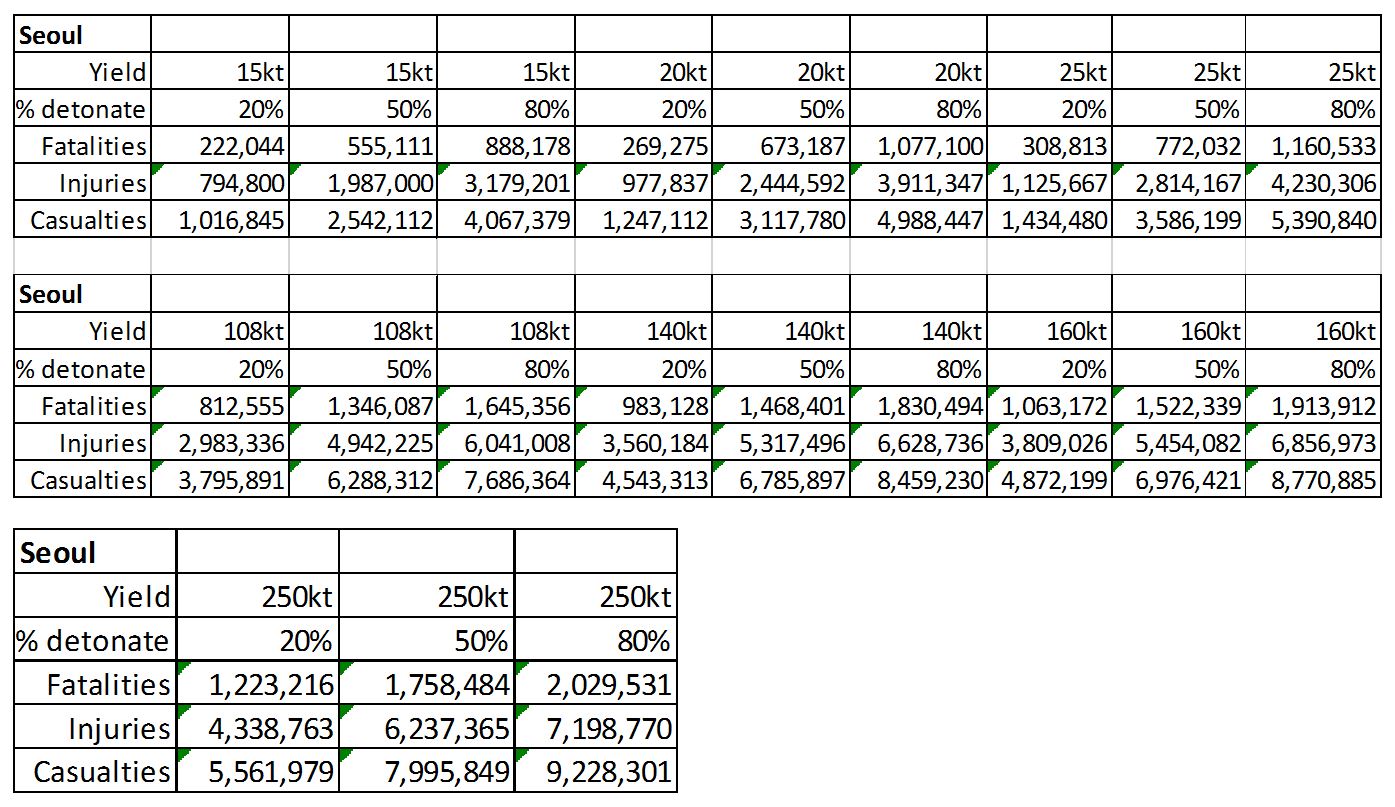 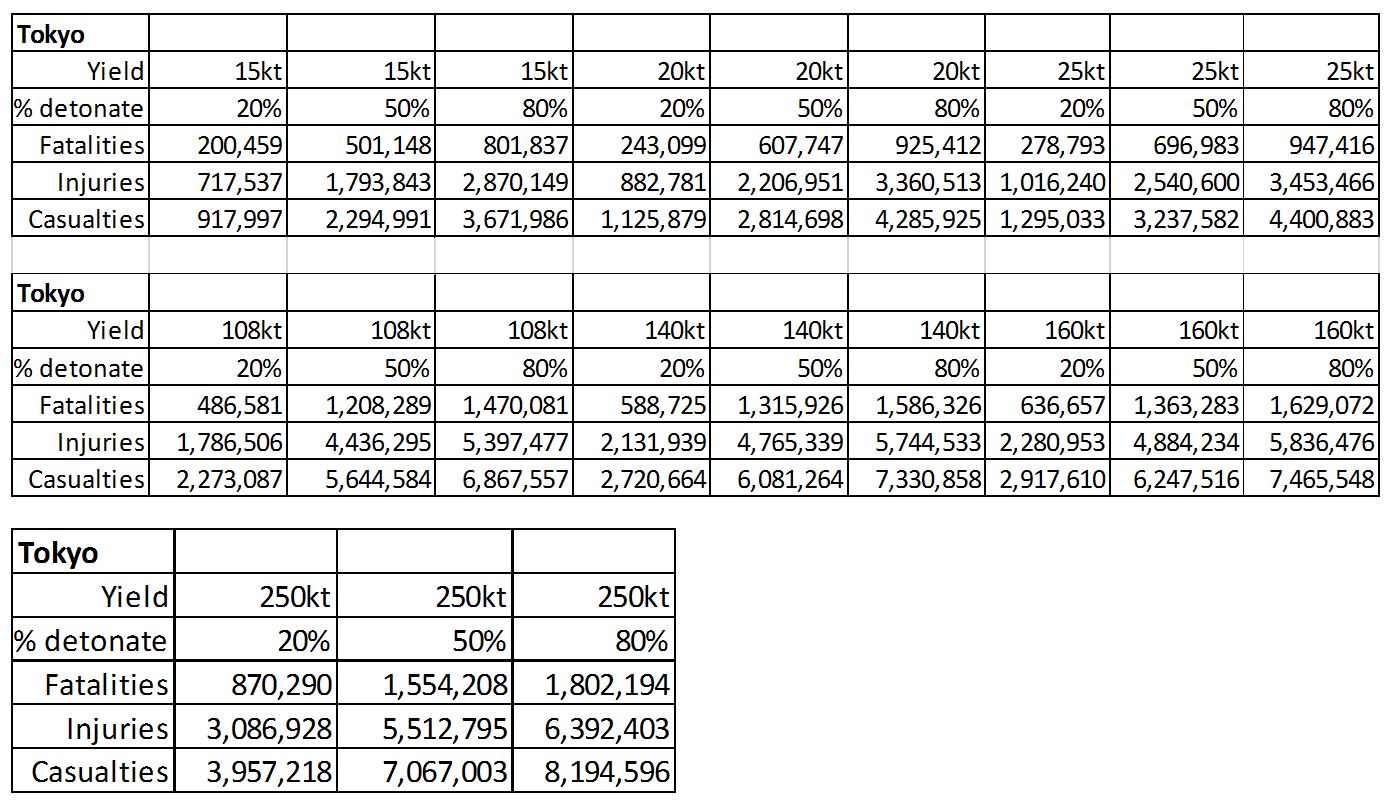 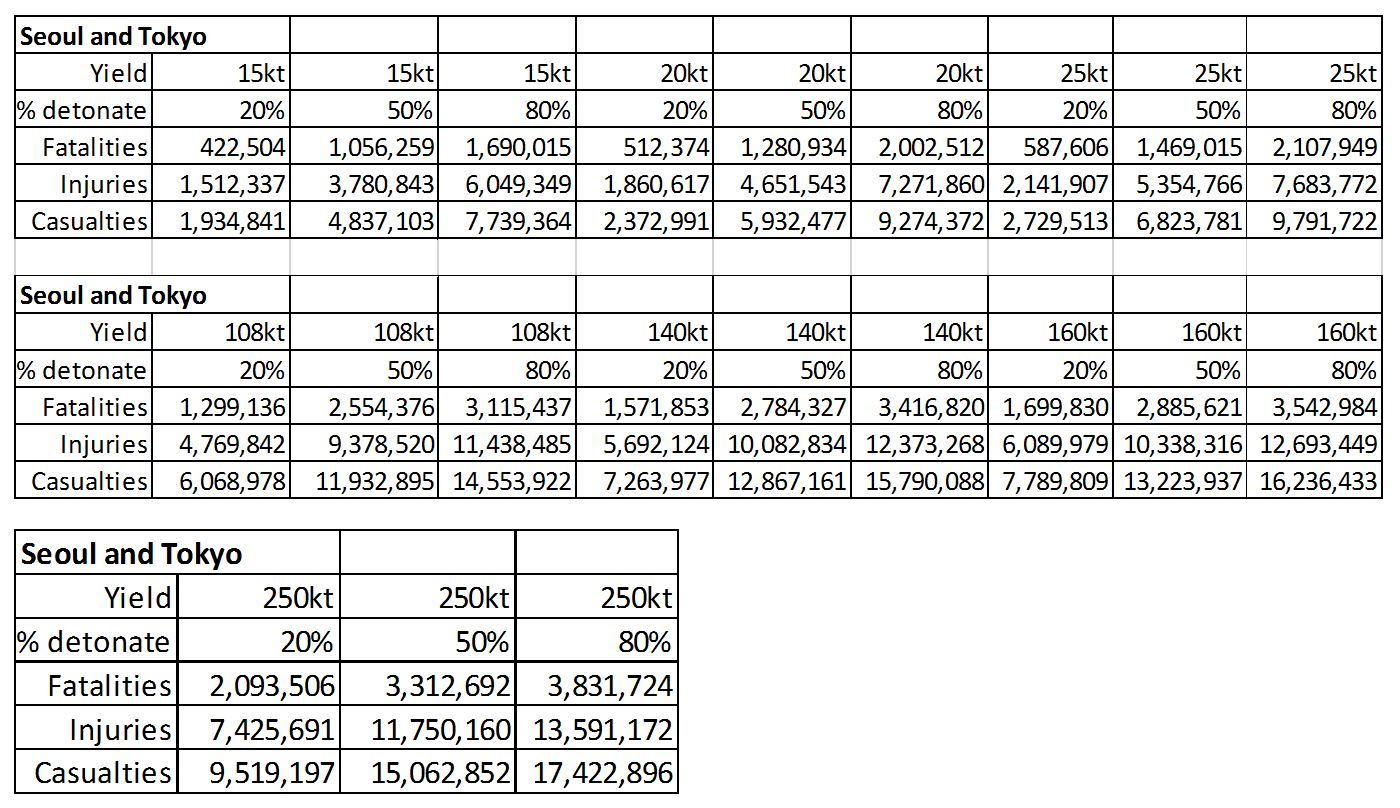