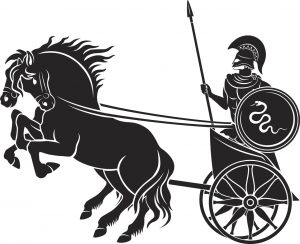 Last March, I worried aloud that the gods of war were pleased by the arc of the North Korean issue, and could see a clash not far off, on the near horizon. How much more pleased they must be today as they patiently wait, armor gleaming in the autumn sunlight, their swords whetted, the plumed horses hitched to war chariots ready to leap into the bloody fray.

Over the past six months, several opportunities to explore something other than open conflict emerged but then faded once again. Especially in the early months of the current administration, there seems to have been a golden moment when the two sides might have changed course. That disappeared when Washington decided on “maximum pressure and engagement,” while Pyongyang chose to resume, at a breakneck pace, developing what it terms its “state nuclear force.”

Is there similar opportunity now? Can we draw a doorway on the rock face of the mountain and then open it at the last moment before disaster, as if in a Road Runner cartoon? It seems unlikely. The situation has become significantly more complicated from where it was in January 2017 when the outgoing US president handed his successor the dangerous mess created under his watch.

In recent weeks, the gathering storm has been described by countless observers on an almost daily basis. Anyone who reads a newspaper of whatever political stripe knows the dangers and the potential catastrophic losses in blood and treasure if current trends continue. Perhaps what has been lacking has been a closer look at the clockwork mechanisms driving the dangers to higher and higher levels.

One problem not well understood is that the North Koreans believe recent developments in their nuclear weapons program have boosted them to a level of invulnerability, and that as a result, Washington—whatever it might say—is without options to counter them.

In fact, Pyongyang is so convinced that its strategic position has fundamentally changed for the better that it has recently suggested there may be no need for it to continue building up its program. Since two successful ICBM launches last July, the North’s position is that it has reached the “final stage” in bolstering the nuclear force. It has even explicitly laid out a final goal, a “practical equilibrium” with the United States. What that means exactly we do not know, though presumably Pyongyang has something specific in mind.

In my view, the North is carefully laying the foundation for declaring a victory on the first half (the nuclear buildup) of Kim Jong Un’s March 2013 two-line policy (byungjin) and then turning the focus to the other half—the economy. We don’t have to believe or disbelieve that this is Kim’s real line of march. All we need do is watch to see how he proceeds in the next few months, and judge whether developments provide an opportunity for both sides to step back long enough to explore how to stabilize the situation, that is, take a first step toward entering into longer-term negotiations that wrestle with the core issues.

The problem at the moment is that of trapeze artists seeking to perfect their timing. Pyongyang cannot afford to misjudge the moment of a leap from the nuclear to the economic sectors. I do not know the exact right instant for Kim Jong Un to move, but much more important, neither does the North. This sort of timing is art, not science. Waiting a beat too long could be fatal, but it would not be the first time the North was off in its timing.

If it is Kim’s intent to leap from one trapeze to another, there are a number of crucially important questions he may have already considered, and we might as well do so, too.

Having succeeded in getting this far with nothing more than sanctions, Pyongyang could easily believe that one more step will not elicit anything worse, and that there is no sense sitting down with the Americans until the final “demonstration” step is taken. Watching events in Washington, it would not be surprising if the North has concluded that the President is too weak and embattled to take decisive action in response.

On the US side, the President may well believe that his personal style has thus far proved successful on any number of policy fronts. That’s up to him. But on the North Korean issue, I can only say, no, it is not working here. I know it is not, and with all humility, I’d tell him so if he asked. Whether he subsequently adjusted his approach would obviously be his choice.

Up to now, the North Korean issue is one on which he is apparently listening to his advisers. They are failing him. The President’s senior White House advisers may well believe—and believe fervently—that history shows diplomacy with North Korea always fails because each time the North takes what it wants and then breaks the agreements. On this, they are—plain and simple—wrong. This wouldn’t matter on some arcane problem (people misread history all the time), but there is the mistaken notion that using this interpretation is a solid platform for a “new” policy on North Korea. Actually, it is a rotten plank. A misinterpretation of the facts here will not support anything but still more failed policy, repeating the same failure that has marked US policy on the Korean issue since January 2001.

On the Korean issue, windows open and close, when A is ready, B is not. Several times over the past nine months, one side or the other has backed away from a chance to talk. Each of these episodes may seem only a hiccough, and individually they would not be serious if nothing else were going on. Yet in this dynamic situation, every opportunity missed has made the next one more important, yet harder to achieve. After the verbal slugfest between the two leaders in September, there have been only the wispiest of contacts between the sides. The result is like trying to stop a charging elephant with a blade of grass. Meanwhile, “progress” as defined by each side has been in all the wrong places. US pressure—masquerading as diplomacy—has increased, while Washington has bound itself in a tangle of sanctions—multilateral and unilateral—in response to rapid-fire growth in what the North terms its “deterrence.”

The gods of war are pleased when mortals stumble over their own misperceptions, when they are overwhelmed by myths about themselves and their opponents, when no one is talking anymore, when options narrow, when momentum dictates decisions, when doors slam and are bolted, when sacrifice is glorified and slaughter becomes acceptable. The dawn when the swords are unsheathed is coming; the gods of war can feel it in their bones.