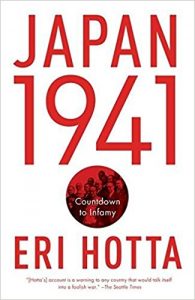 In Japan 1941: Countdown to Infamy, Eri Hotta tells the story of how Japan’s leaders led their country into war with the United States even though virtually the entire Japanese national security establishment expected to lose. Reading Hotta’s account, I couldn’t help but wonder: Japan 1941, North Korea 2017? The DPRK almost certainly understands that should it go to war with the United States, it would lose. But would the North Koreans do it anyway, as the Japanese did? With these questions in mind, I interviewed the author of Japan 1941 to see if she saw parallels, or found lessons to be learned, from US efforts in 1941 to change Japan’s aggressive behavior in Asia and US efforts in 2017 to change North Korean policy and action on its nuclear and missile programs.

The focus of the discussion was the danger of unintended consequences. Our conversation focused on sanctions, how the mindset that war is inevitable imparts momentum that can make that outcome more likely, and what the off-ramp from this sprint to the abyss might look like. Hotta cautioned against simplistic and overly broad comparisons between Japan 1941 and North Korea 2017. But she suggests important lessons could be applied today from our experience 75 years ago—lessons in avoiding the outcome that nobody should want. Excerpts from our interview are printed below.[1]

Sanctions and the Apocalypse

Jeff Baron: How important were sanctions in Japan’s decision to strike first against the United States, including the oil embargo imposed by the US in August 1941, at a time that Japan got 93 percent of its oil from the US?

First, the oil sanctions gave the younger, mid-level military officers, those tasked with developing military plans—and the people who really thought in apocalyptic terms—the basis to argue that war with the United States was inevitable: ‘Look, the US is squeezing us dry. Each day the Navy is burning 400 tons of oil—we’ll have less tomorrow than we have today. So the time to attack is sooner rather than later—we have to be able to attack while we’re still able.’

Even though there were those who were convinced Japan would be defeated, they couldn’t turn back because the move to war was practically on autopilot by then. Well, it had the appearance of being on autopilot, though of course the Emperor could have said, ‘I’m vetoing this decision.’ But the Emperor was worried about a coup d’etat if he did that.

The second reason is that when discussing sanctions, the senior people—the decision-makers in the cabinet and military—were afraid of appearing weak and indecisive in the eyes of the younger officers.

JB: Is it reasonable to think some of this may be going on in the DPRK? That some decision-makers might be concerned about appearing weak and indecisive before those who are pushing for apocalyptic action?

EH: I see the analogy. The leader of North Korea might be concerned with appearing stronger than he really is. Others may be caught up in the same dynamic. We have no way of knowing for certain. But that’s the way it was in Japan 1941, and I see similarities to the situation now with the DPRK.

Did Japan Think It Would Win?

JB: North Korea can do the math just as we can, and while Pyongyang knows it could do a lot of damage to the US and our allies, both in ways we can anticipate and frankly in other ways we can’t, my guess is the North Koreans would have zero confidence they could defeat the United States in a military conflict. Did Japan think it could win a war against the US?

EH: There was an element of hope Japan would get away with it. That the US would be shocked into suing for peace on Japan’s terms. But in truth, the real view was the chance of a devastating outcome for Japan was 99 percent, 99.9 percent.

JB: In your book you recount how two months before Pearl Harbor the planner of that attack, Admiral Yamamoto Isoroku, told the Navy Command that “a war with so little chance of success should not be fought.” If the leadership had so little confidence in victory, why did they go to war? 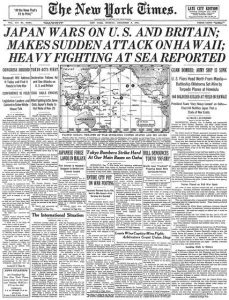 EH: In questions of war and peace, the common view is, a country goes to war because they think they’ll win the war. For Japan, that wasn’t the case at all. The chance of success seemed terribly small, especially to the people making the calculations, and ultimately, the decisions. But they did it anyway.

Fear was a big factor. The leaders were fundamentally people who were afraid of losing credibility, of not appearing tough enough before others in the room who were themselves arguing for a tough approach. The fear was that if they moved to put the brakes on preparations for war, it would open the way for harder line usurpers to come in and take over. That fear of usurpers pushed the leaders to champion the most aggressive policies.

Some of the answer, too, can be found in the nature of bureaucracies. For the military leaders, for the Army and the Navy, taking the tough line was the way to argue for a larger share of the budget and to defend the legitimacy of their institutions against outcomes that would have weakened them, their influence, their leadership roles in society.

JB: Of course, we don’t have these windows into decision-making in the DPRK. No one here can make assessments on what’s at play now in Pyongyang with full confidence. But the forces you’ve talked about—sanctions and the consequent fear of dying on the vine as irreplaceable resources run dry, the problem of no one wanting to appear weak before the hawks in the room pressing for decisive action, the decision to go to war under circumstances where no one believes the war should be fought—seems to me could all be applied to the DPRK in 2017, the North Korean side of the pathway to catastrophe. Based on your work, what thoughts would you offer to both sides to get off the trajectory toward conflict we appear to be traveling?

EH: Neither side should think war is inevitable. Once you decide that war becomes inevitable, the other options disappear, become irrelevant. And both sides become driven by desperation.

Preconditions can close off negotiations, prevent them from getting underway. Japan’s Prime Minister, Konoe Fumimaro, in August 1941 proposed to US President Roosevelt that they meet in Alaska. Konoe’s hope was that the two of them together could achieve a great peace with the force of international diplomacy, conducted leader to leader, when no one else would be around to quibble with the details. Konoe knew the military officers would resist if they were in the room, especially in protecting their institutional interests. But he believed the outcome would be acceptance; with the leader having negotiated an agreement with the approval of the Emperor, the military would have gone along.

Konoe understood that, not confident of success, the military leadership was itself also looking for a way out. The US responded, quite reasonably, with a set of preconditions Japan should have been able to meet. What happened, however, was those preconditions gave the military the basis to quibble with the details of what an agreement might have looked like—and the outcome, of course, was the attack on Pearl Harbor—the outcome neither Japan nor the US wanted.

Konoe’s vision was, great things can get decided by leaders in one go. It’s a shame Konoe and Roosevelt didn’t meet in Juneau, or in Hawaii as was first suggested. It might have been a turning point, a way out. And now, who knows what a meeting between the US and North Korean leaders might achieve?

Finally, structuring the conversation so that the other side can preserve face is absolutely important. Creating an environment that prevents the other side from keeping face—that can have catastrophic consequences.