North Korea’s recent announcement that various events will be held on February 8 to celebrate the foundation of the Korean People’s Army (KPA)[1] has led to speculation that a military parade will likely be a part of the celebration. The current level of activity observed at the Mirim Parade Training Facility on the east side of Pyongyang offers support for this belief.[2] Commercial satellite imagery has shown a steady build-up of personnel and equipment at this training ground since November 2017, with parade practice currently underway.

These military parades are of great interest to outsiders, as North Korea has frequently used them to showcase new military equipment and its latest weapons systems. Because of their high profile nature, North Korean troops train and practice intricate formations for months in advance to ensure flawless performances.

If the North goes ahead with a military parade on February 8, coinciding with the opening of the Pyeongchang Olympics, it will likely warrant much criticism from skeptics of inter-Korean dialogue. However, for domestic audiences, it would cap off a year of dramatic progress in North Korea’s nuclear and ballistic missile programs, as well as more general military developments.

Figure 1. On November 24, 2017, a large number of buses were parked in front of the April 25 Hotel at the Mirim Parade Training Facility. These are believed to have been for meetings of the parade organizers. Figure 2. By January 10, 2018, considerable progress had been made assembling troops and equipment for the upcoming parade. Vehicles and equipment are assembled in two parking areas, troops are marching in formation on the roads, other units are in formation in the replica of Kim Il Sung Square, and the shelters for heavy equipment have been erected—although no heavy equipment appears present. 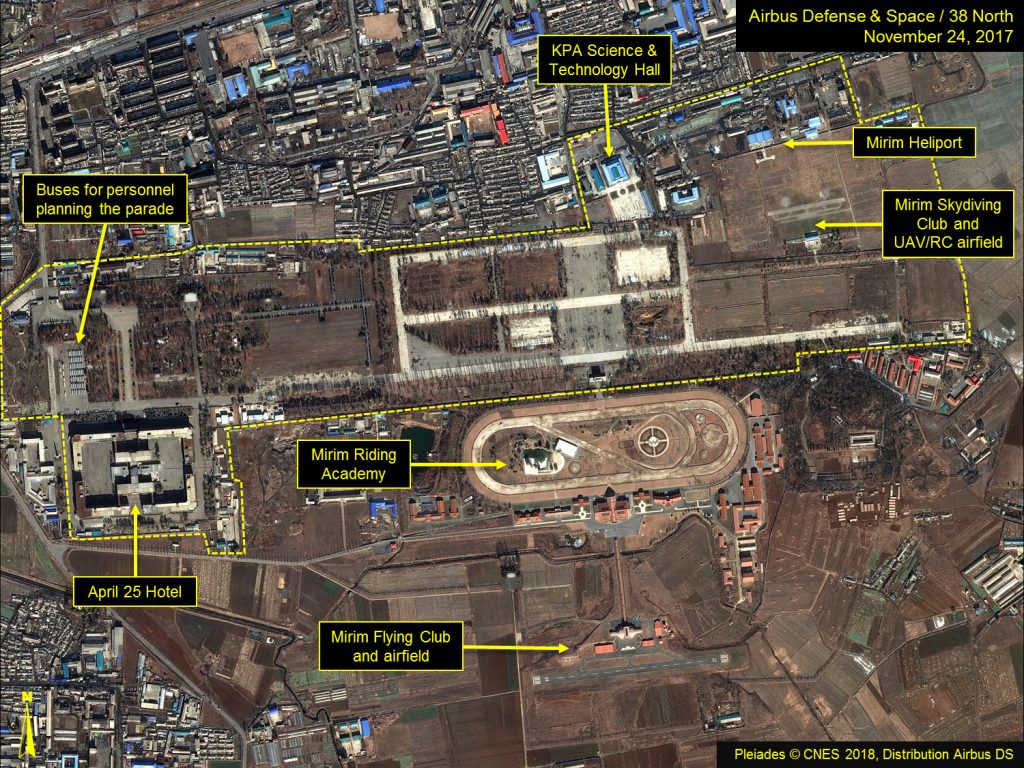 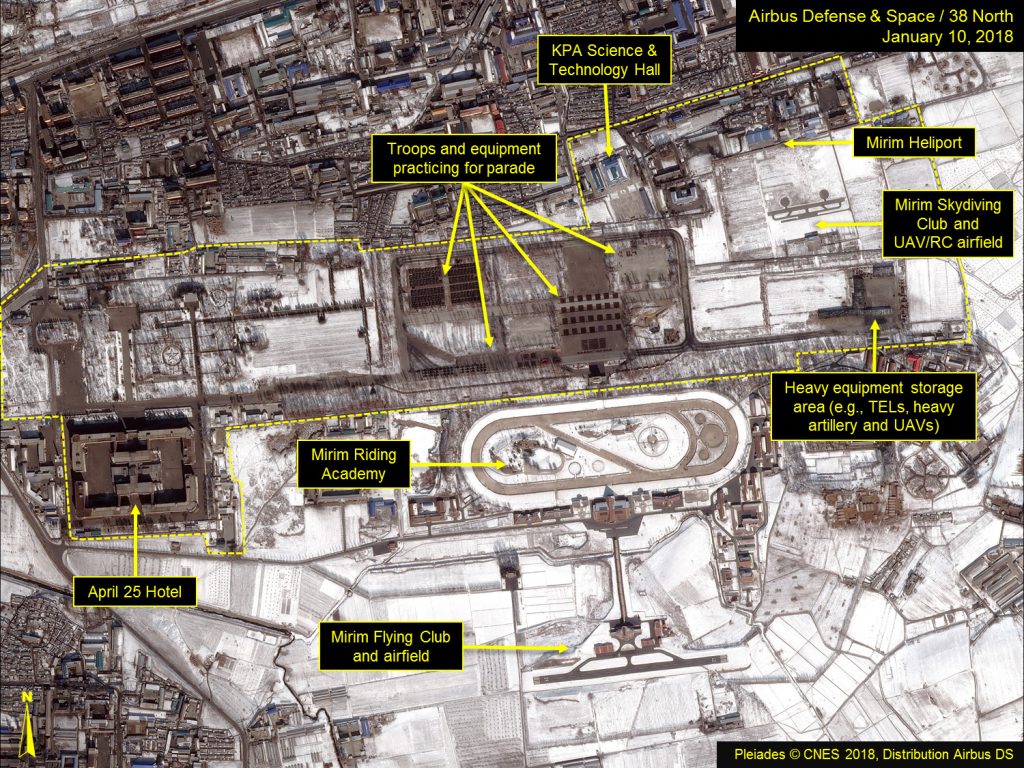 Preparations for North Korean military parades have followed a consistent pattern over the past 15 years. The process generally starts four to six months in advance with a build-up of equipment and personnel at the Mirim Parade Training Facility, and with active training being conducted over the last two to four months of that period. Recent commercial satellite imagery indicates that this same pattern is currently underway.

The process generally starts with a decision from Kim Jong Un to conduct the parade. Once the decision is handed down, the responsible committees from the Korean Workers’ Party (KWP), Korean People’s Army (KPA) and government meet to decide upon the specifics. Orders are then issued to concerned organizations, the schedule set, and the organizers are bused in for a meeting at the Mirim Parade Training Facility.

Note: Hover over slideshow and click on left/right arrows to navigate.

One-to-three months before the parade, specially selected teams from KPA units begin to arrive. These are generally infantry-type units or units that will have personnel marching in the parade. The units are typically brought in by trucks that are parked at the training facility and housed locally,often at the April 25 Hotel.

During the same period, but typically after the first ground units arrive, specially selected parade teams from light artillery and anti-aircraft units arrive with small detachments of equipment.

As these units arrive, they begin practicing formations and timing around the facility roads and into the center of the training facility, which is a replica of Kim Il Sung Square that includes the reviewing stand where Kim Jong Un is likely to be situated. Music and choreography are also practiced during this stage.

Parade teams from the Korean Workers’ Party will also be bused in to practice marching at Kim Il Sung Square with the military units. This occurs more frequently during the later stages of parade preparation.

As the date for the parade draws close, additional teams—now including mechanized and armor units—arrive and are integrated into the practice sessions. The equipment for these units is parked along the roads on the east side of the training facility and personnel are housed locally.

If a large parade is planned, housing fills up and a “tent city” is erected at the east end of the facility at the Mirim Heliport and the small airfield used by the Mirim Skydiving Club.[3] This tent city consists of a collection of housing, mess, medical, and logistic and maintenance components that appear to be organized by unit and branch of service.

The final units to arrive, typically one-to-three weeks before the parade, are long-range self-propelled artillery and UAV platforms, and surface-to-air missile (SAM) and ballistic missile launchers. These are housed in the southeast corner of the training facility within camouflaged shelters.

On the day of the parade, all units are organized by parade order at the training facility and at the appropriate time proceed, via the Okryu Bridge, to the parade route on Sungri Street for the parade through Kim Il Sung Square. Some of the units are transported by bus or truck to holding areas along the parade route to await their turn to march.

As individual units pass the reviewing stand, they are moved onto side streets south of the Square and parked until the parade is finished. Following the parade, many of the military units move back to the Mirim Parade Training Facility, although some of the heavier units (e.g., ballistic missile launchers) cover their equipment with tarps and move back to their home bases.