After initial reporting of plans to allow experts and media personnel to observe the closing of North Korea’s Punggye-ri Nuclear Test Site,[1] now scheduled for next week,[2] commercial satellite imagery from May 7 provided the first definitive evidence that dismantlement of the test site was already well underway.[3] Several key operational support buildings, located just outside the North, West and South Portals, have been razed since our last analysis. Some of the rails for the mining carts, which had led from the tunnels to their respective spoil piles, have apparently been removed. Additionally, some carts seem to have been tipped over and/or disassembled, and several small sheds/outbuildings around the site had been removed.

Other more substantial buildings around the facility remain intact, including the two largest buildings at the Command Center, and the Main Administrative Support Area. Moreover, no tunnel entrances appear to have yet been permanently closed. This may be because on May 12, the official Korean Central News Agency (KCNA) announced that the final dismantlement of the Punggye-ri nuclear test ground would be witnessed by foreign journalists and would involve the “collapsing all of its tunnels with explosions, blocking its entrances, and removing all observation facilities, research buildings and security posts.”

Between April 20 and May 7, 2018, the probable engineering office building and a possible instrumentation shed located just outside the North Portal (where the last five underground nuclear tests have been conducted) were razed along with at least two smaller buildings or sheds. Part of the roof was removed from the probable compressor building that evidently provided ventilation to the tunnel system under Mt. Mantap. A possible air line, which connected that building to the North Portal, may have also been removed. (See Figures 1 and 2)

Figure 1. Significant changes took place at the North and South Portals between April 20 and May 7 consistent with site closing. 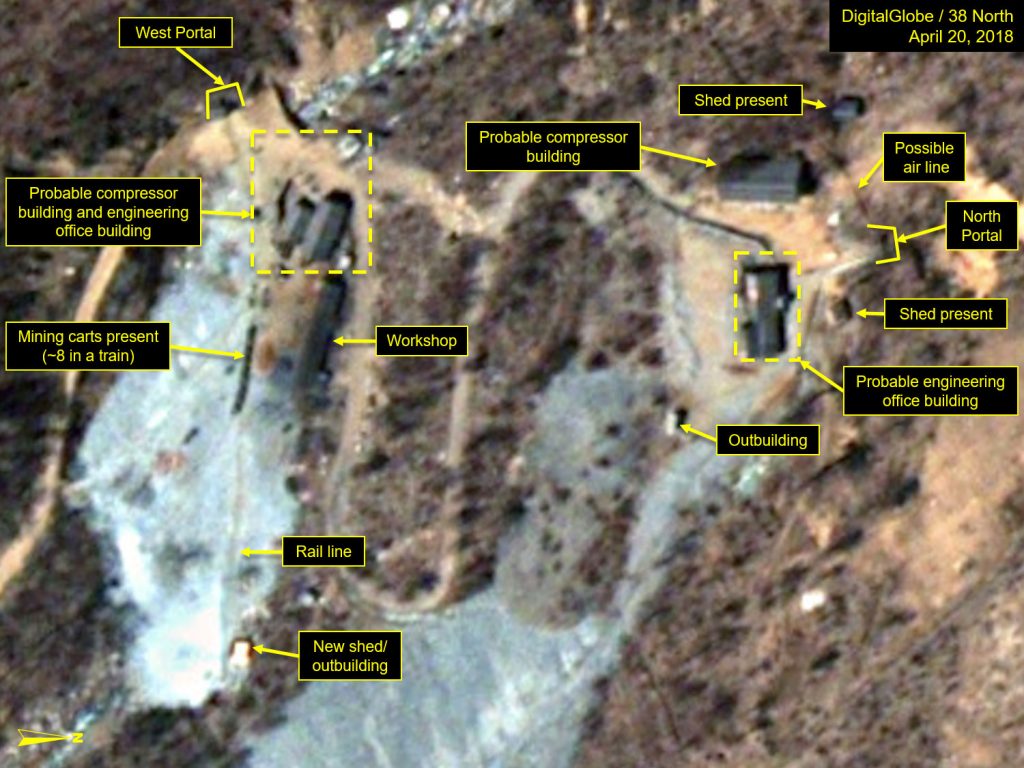 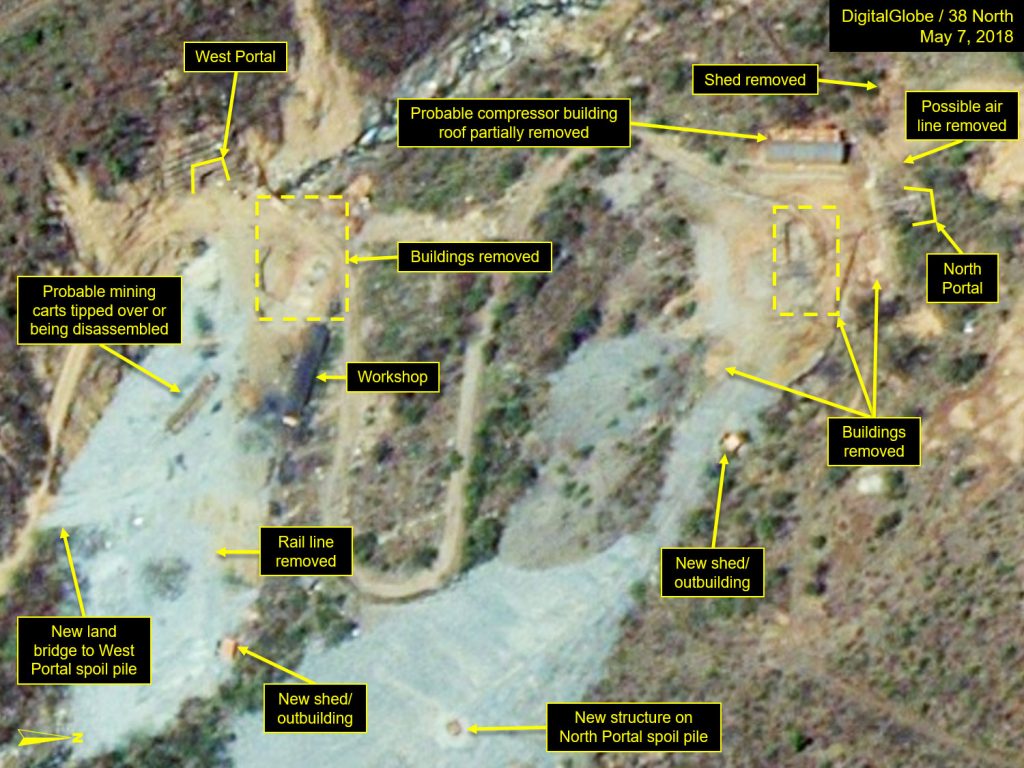 Figure 2. A close up of the North Portal shows that the infrastructure that likely provided ventilation to the tunnel system is being dismantled. 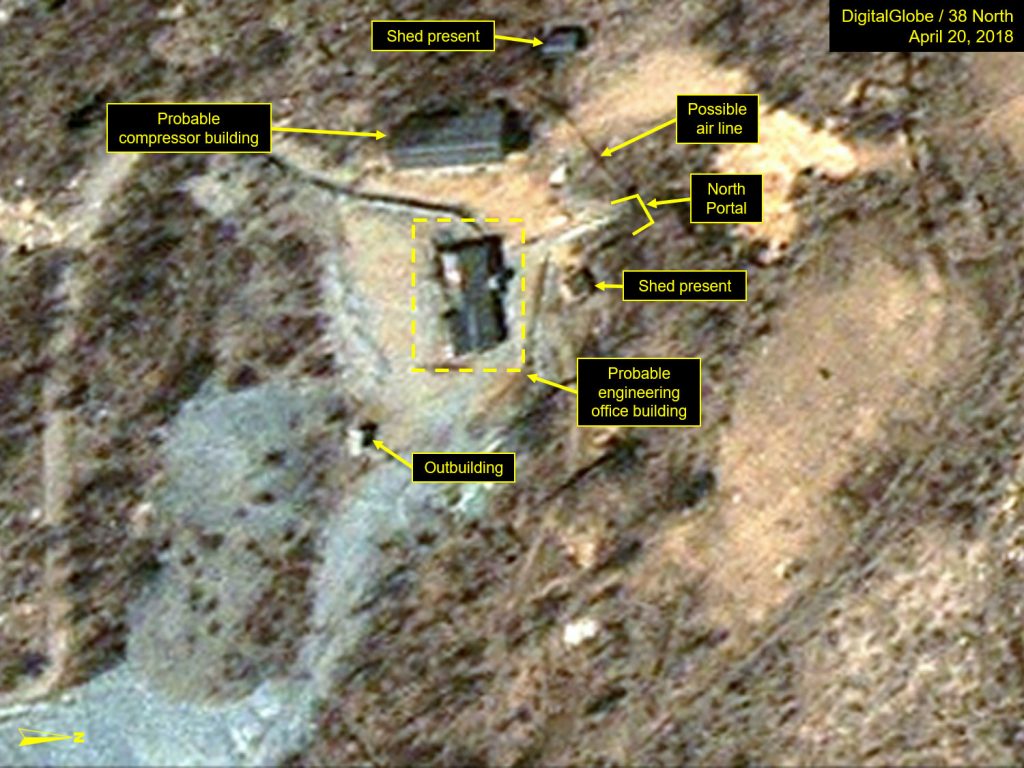 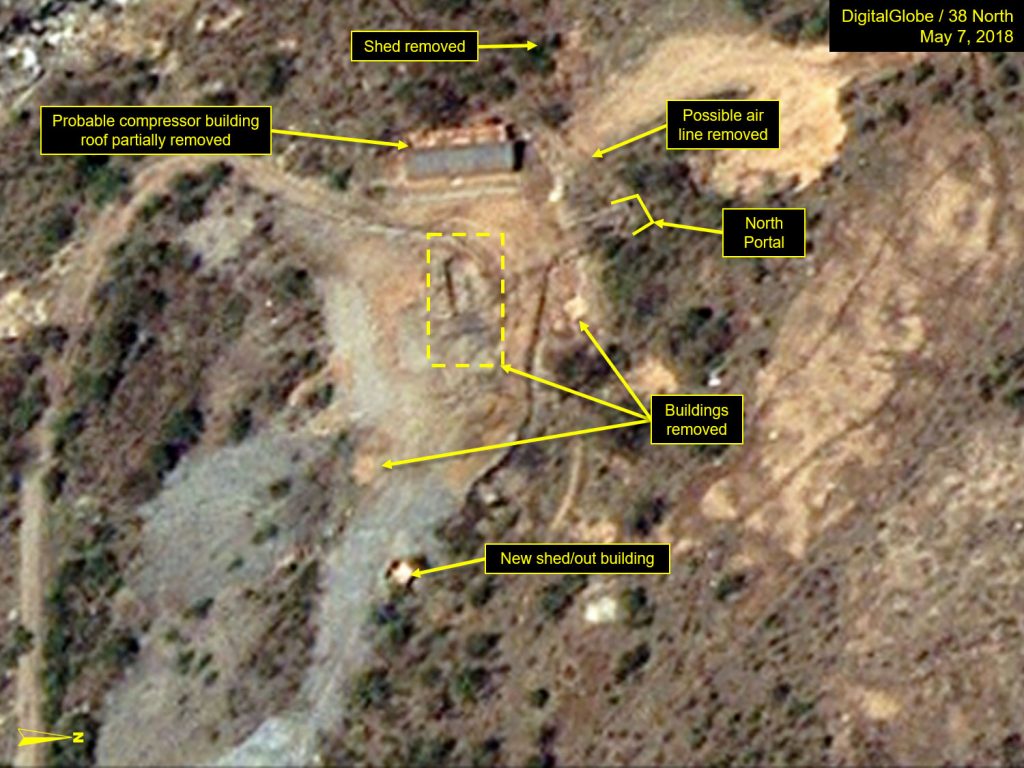 Excavation of the tunnel served by the West Portal was apparently halted by late March and imagery from April 20 showed at least a dozen mining carts parked out in the open. Imagery from May 7 shows that two key buildings (one likely an engineering office building, the other a compressor building) near the portal has been razed along with a shed that might have housed instrumentation equipment and one small outbuilding. The rail lines for the mining carts have all apparently been removed and the previously noted train of mining carts appears to have been tipped over and/or disassembled on the spoil pile. This activity along with the rail removal could be further evidence of an operational shut down.

Figure 3. A close up of the West Portal shows removal of rail lines from the tunnel to the spoil pile and the carts being either tipped over or disassembled. 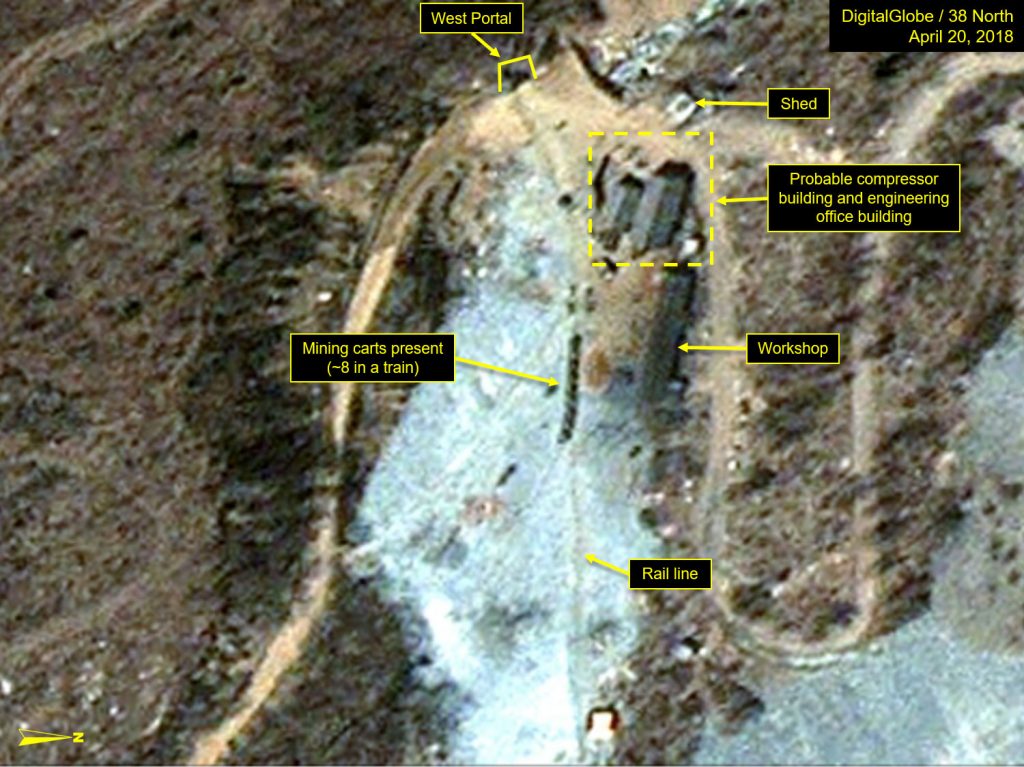 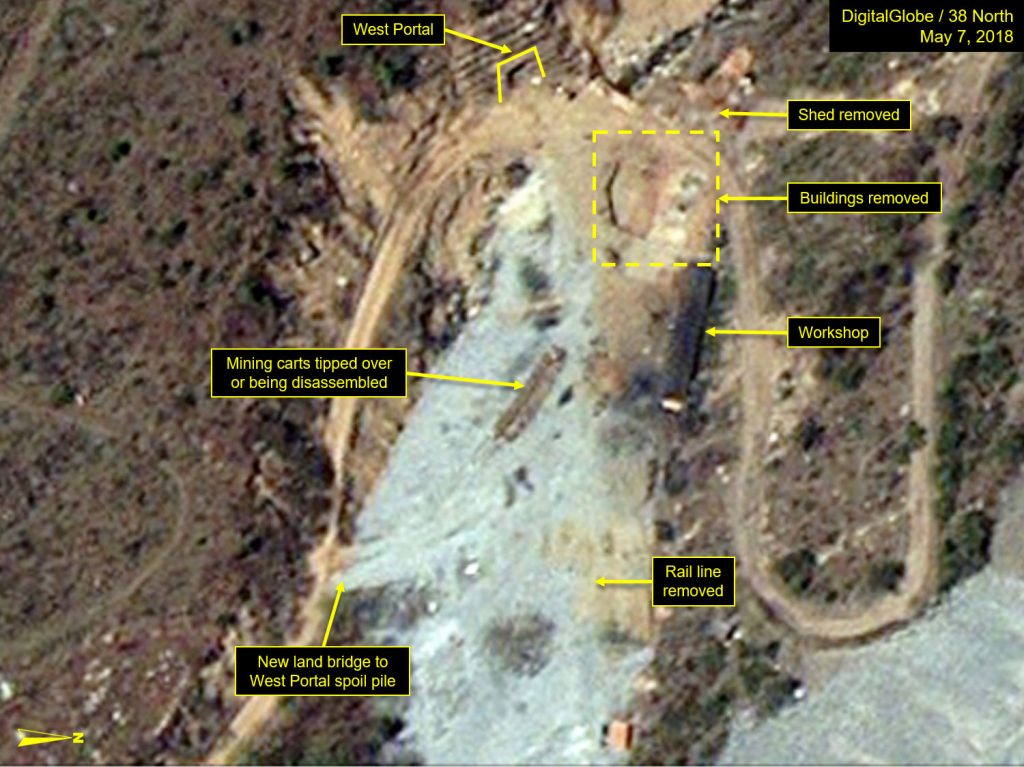 Some significant changes are also apparent in the South Portal area. The probable engineering office building for this area and a portion of the probable compressor building have recently been removed, along with a few other sheds and small buildings. (See Figure 4)

Neither the South nor West Portal tunnel systems have ever been used for nuclear testing, and apart from the recent dismantlement activities, were previously assessed as still viable for future testing.

Figure 4. While the South Portal has never been used, support buildings around the primary and secondary portals have been removed. 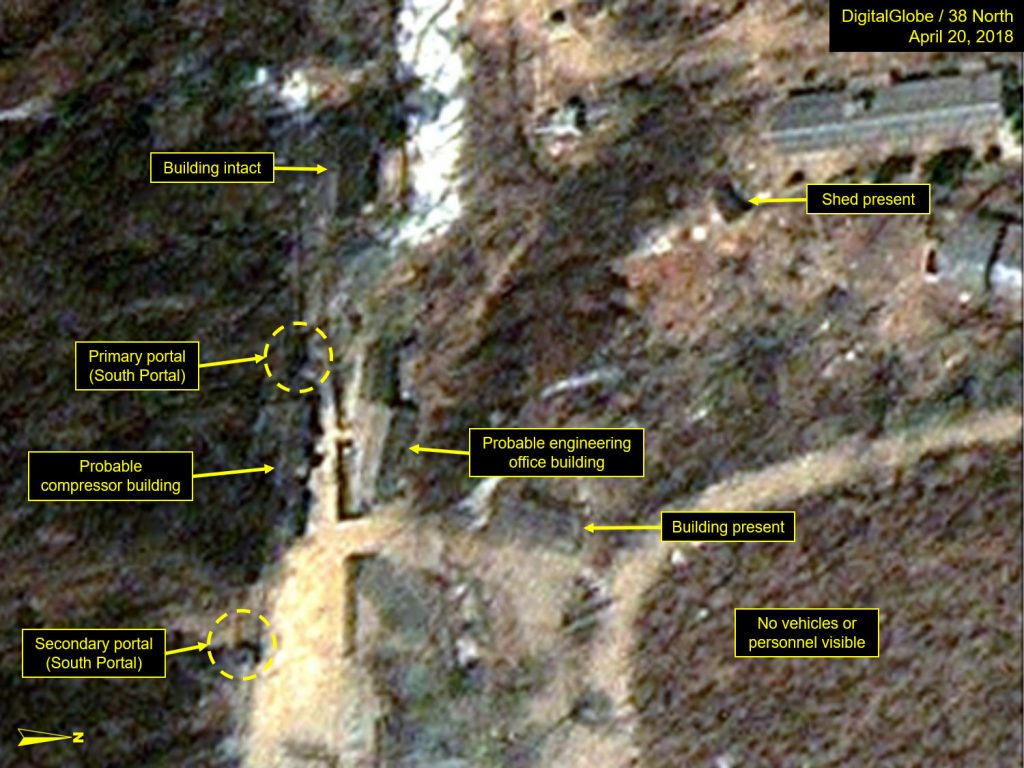 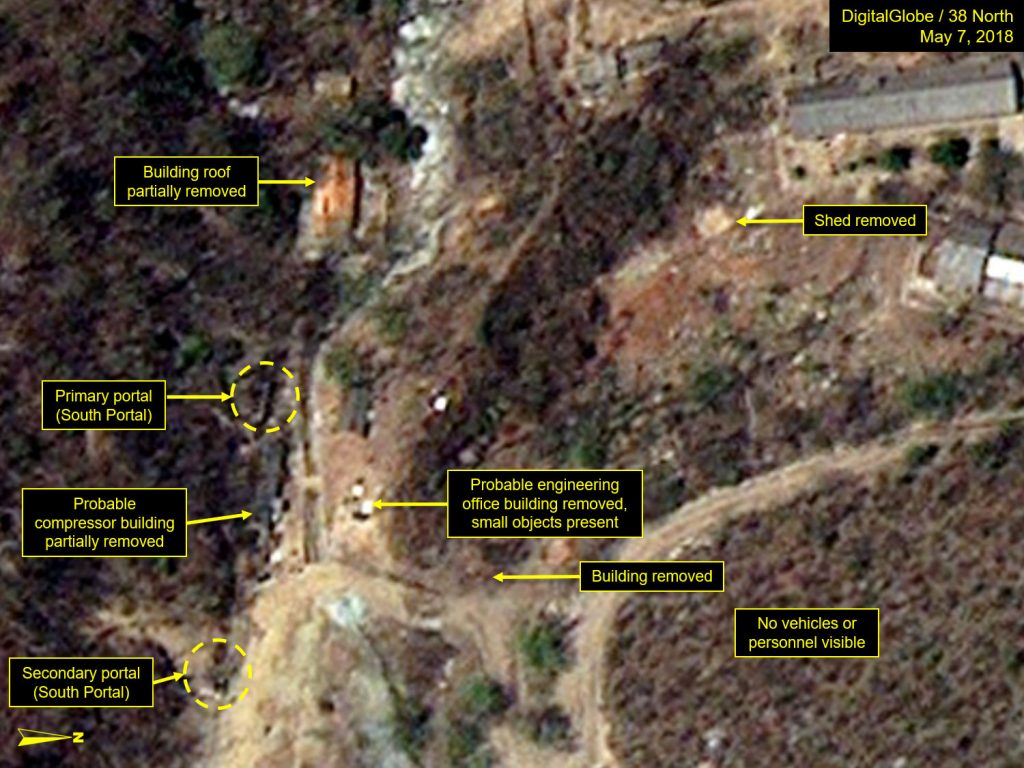 For the most part, the Main Administrative Support Area is essentially intact. One dark-toned vehicle was present in the lower courtyard. A small building located on the hillside to the west was razed. That building, which also had a corral fence associated with it, had previously been used as a guard dog kennel, and, more recently, could have sheltered small livestock as food for key personnel. (See Figure 5)

Figure 5. Support buildings at the Main Administrative Area have been taken down. 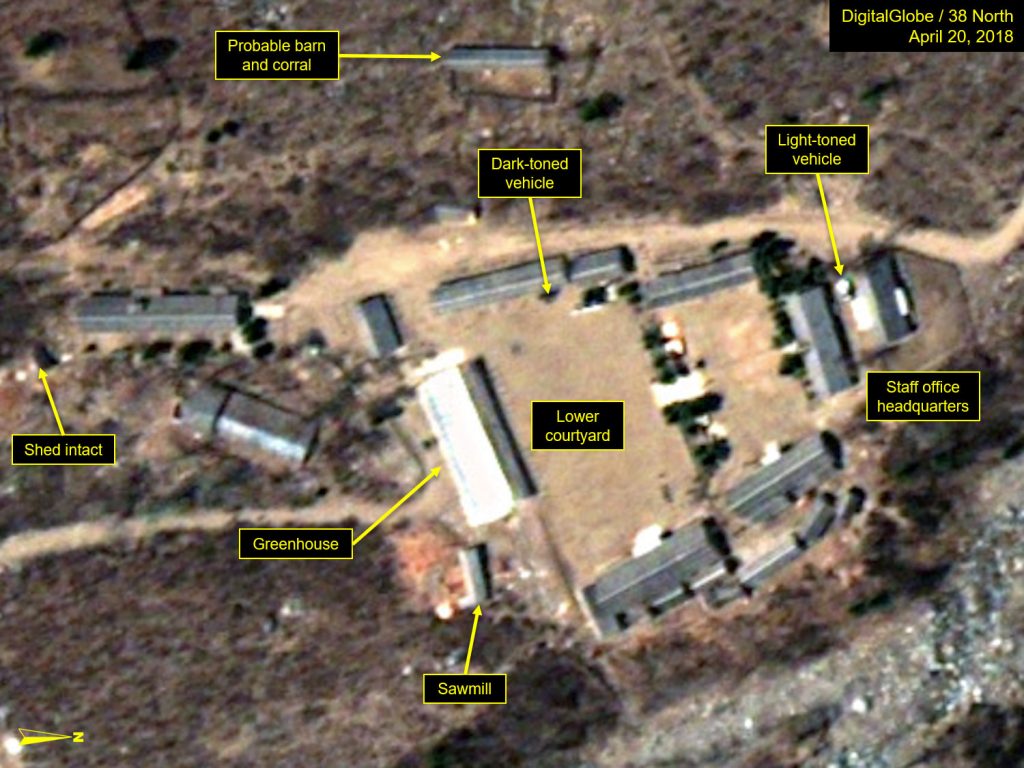 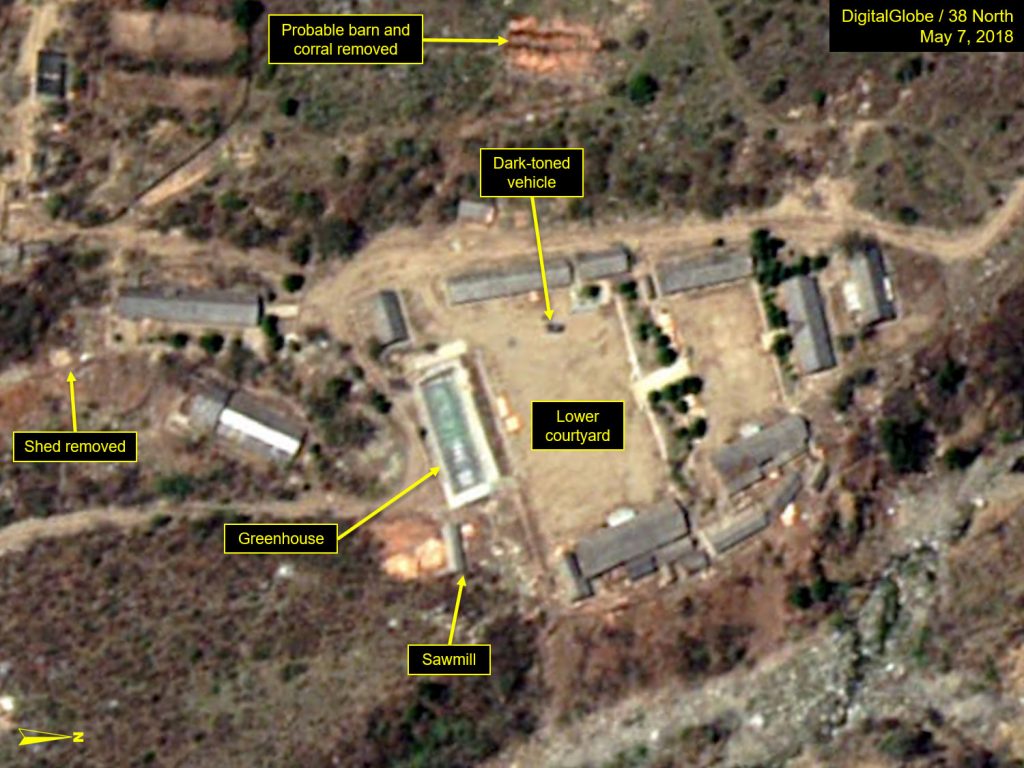 The Command Center compound consists of a walled courtyard bounded on three sides by three main buildings, and one open-sided parking shed. Of those three main buildings, one had a distinctive blue roof that has recently been removed, and two large trucks and two possible shipping containers were parked inside that previously roofed space. The other two main buildings appear to be intact as of May 7. A white roofed parking shed had been removed, but a large white truck and smaller vehicle were visible in that vacated space. No debris is seen anywhere in the compound, so the dismantlement is evidently being done in an orderly fashion. (See Figure 6). One large truck being is present on the access road from the tunnels area (See Figure 7), otherwise no significant vehicles or personnel were observed in any of the various nearby support areas or the security guard barracks area. (See Figures 8 and 9)

Figure 6. Some structures at the Command Center have been taken down. 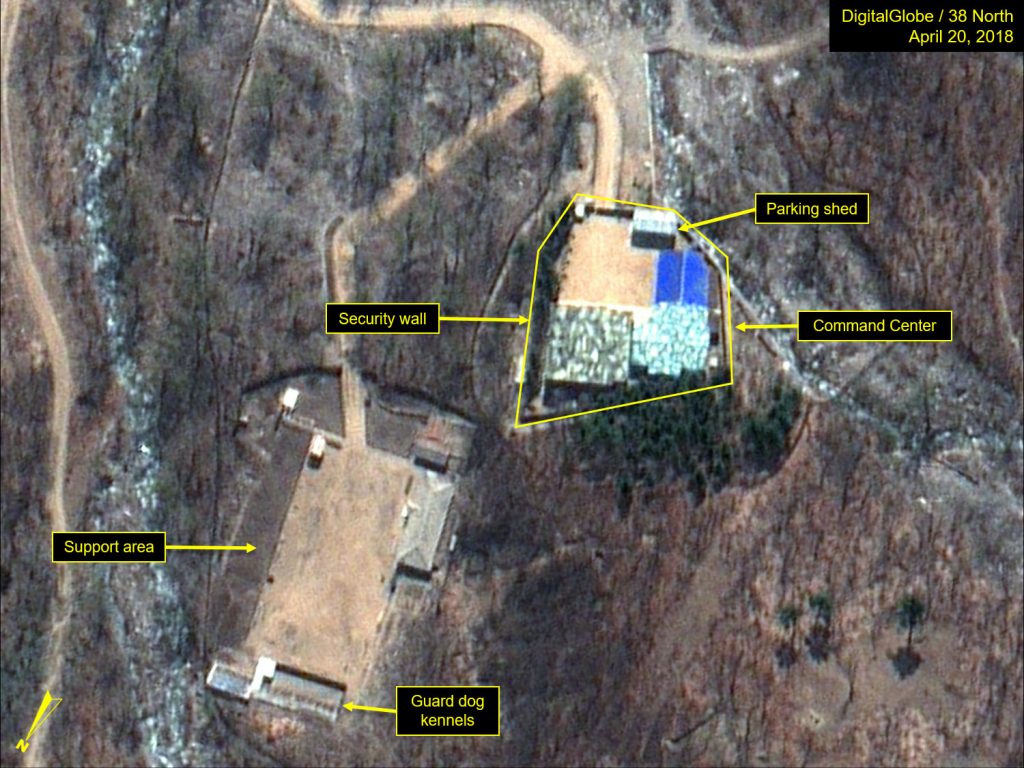 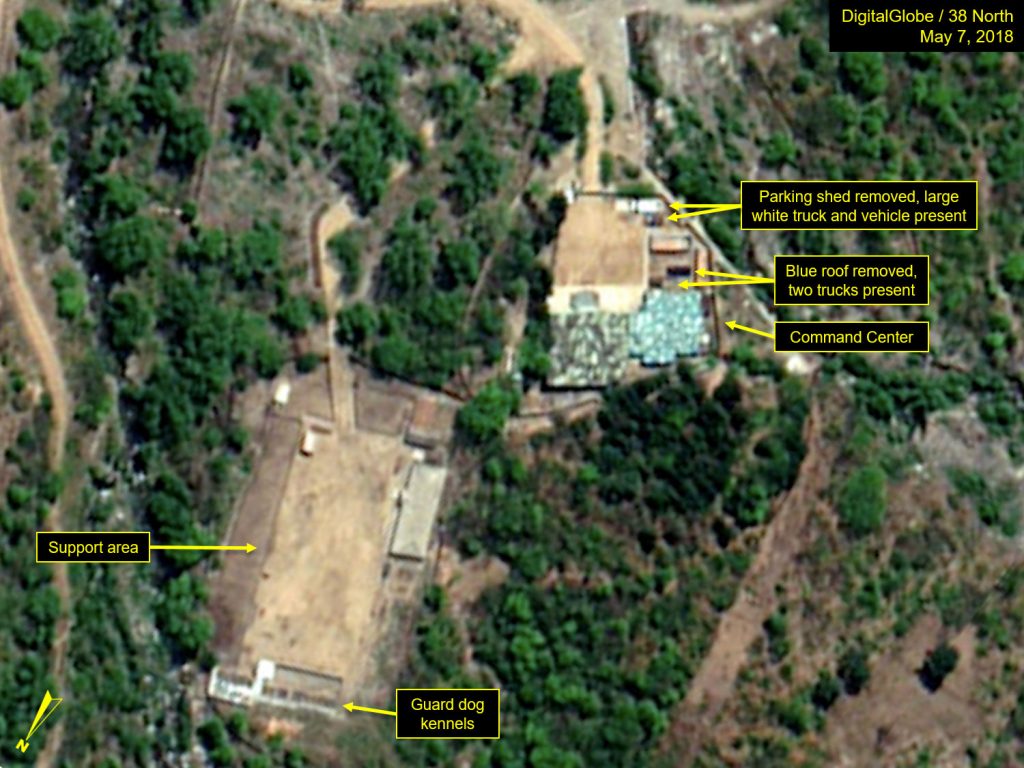 Figure 7. One large truck is observed on the access road from the tunnel area to the Command Center.

Figure 8. No personnel or significant activity is observed at the barracks area.

Figure 9. No personnel or significant activity is observed at the Command Center support area.

Unusual Activity Observed on Hillside Near the West Portal

Approximately 200 meters south of the West Portal, and uphill from it, unusual scarring involving four uneven rows of small objects were placed on the hillside, possibly for storage. It is unclear at this time what this activity represents. (see Figure 10)

While there have been other reports, allegedly from US intelligence sources, of some cabling (e.g., for instrumentation and/or electrical service) having been removed from the tunnels, this type of activity was not apparent in the imagery from May 7.