On April 21, 2018 the state-run Korean Central News Agency (KCNA), quoted North Korean leader Kim Jong Un as saying, “under the proven condition of complete nuclear weapons, we no longer need any nuclear tests, mid-range and intercontinental ballistic rocket tests, and that the nuclear test site in northern area has also completed its mission.” Commercial satellite imagery of the Punggye-ri Nuclear Test Site from April 20, the day before the site’s closure was announced, shows some unusual activity. Most notably, approximately one dozen mining carts—at least eight connected in a long train—could be observed in an unusual arrangement on the spoil pile in the area closest to the West Portal. It is too early to conclude whether this display is related to Kim Jong Un’s announcement.

Shortly after the September 3, 2017 underground nuclear test involving a tunnel accessed through the North Portal, the North Koreans quickly restarted tunneling at the West Portal, which seemed to slow down in early April.[1] Imagery from April 20 indicates a significant increase in the number of mining carts (~one dozen) near the West Portal compared to when last viewed. (Figures 1 & 2). Most notably, at least eight carts appear to have been connected in an unusually long train and parked out on the spoil pile. Also new is a small bright object, possibly a shack, which was noted for the first time at the end of the West Portal’s spoil pile. It is unclear at this time what role that structure might serve, particularly given the just-announced site closure.

Figures 1 & 2. A train of mining carts and new structure are present at the West Portal spoil pile. 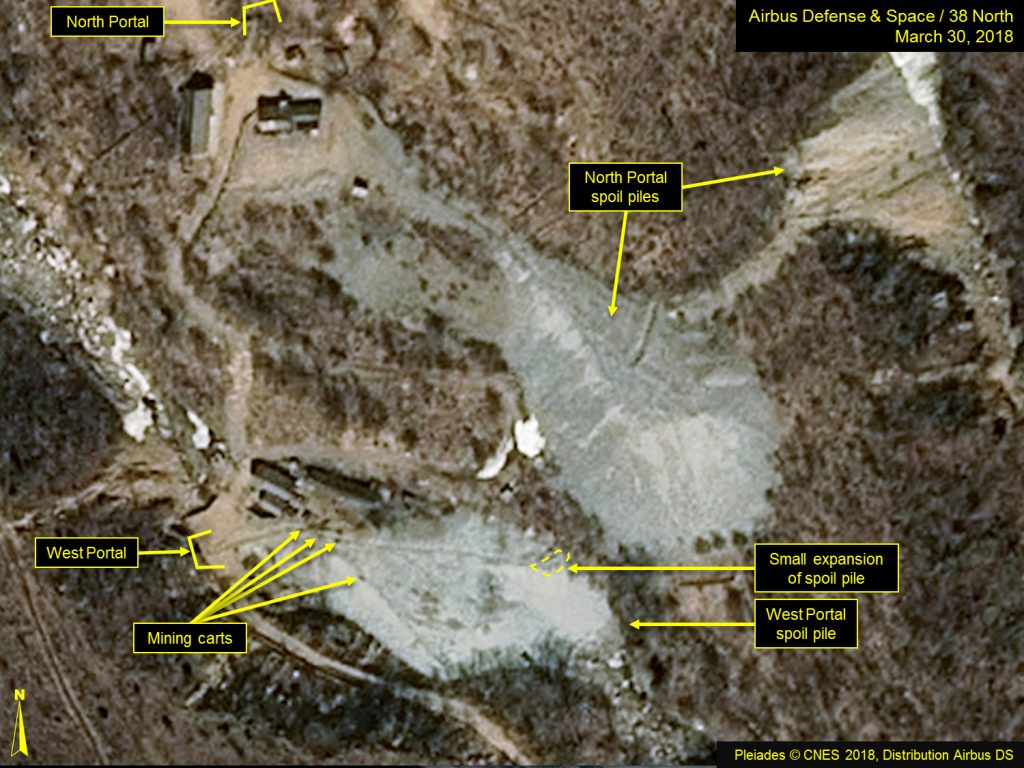 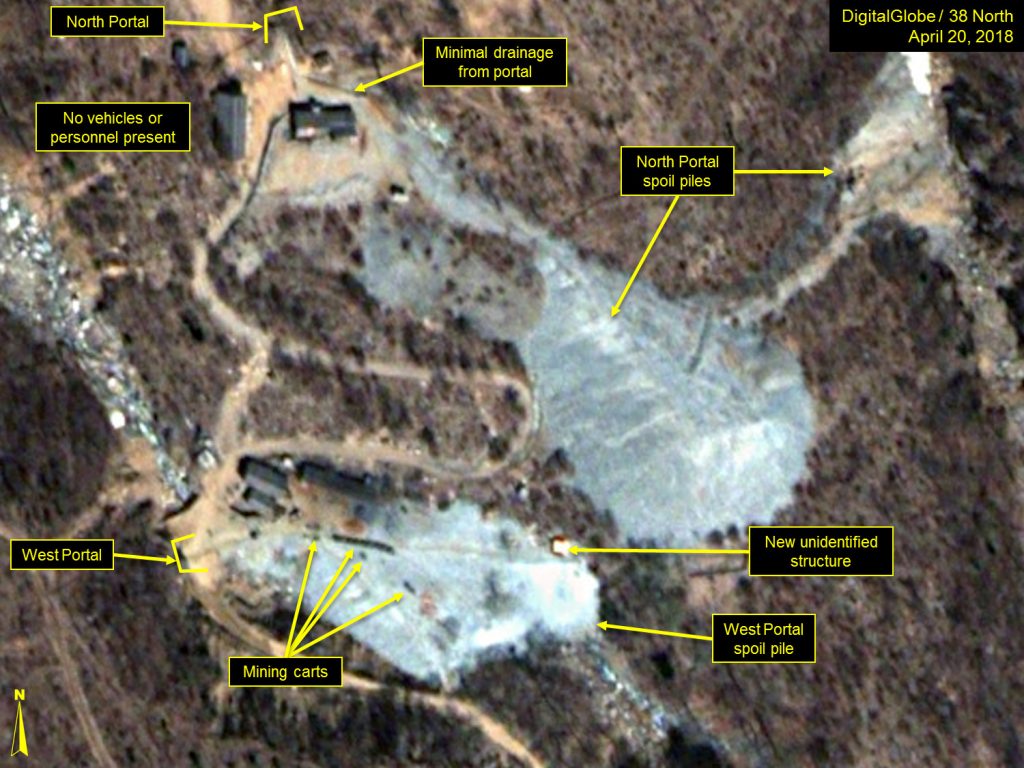 Apparently abandoned following the September 3, 2017 nuclear test, no personnel or vehicles are present and the water drainage from the associated tunnel appears minimal as can also been seen in Figure 1.

The South Portal Area (which includes both a primary and secondary portal) appears to remain quiet with no vehicles or personnel visible. (See Figure 3)

Figure 3. No vehicles of personnel visible at the South Portal.

Imagery from April 20 shows a group of approximately five personnel in the lower courtyard with one light-toned possible vehicle parked above the upper courtyard near a headquarters type building. (See Figure 4)

Figure 4. Small group of personnel and one possible vehicle present at the Main Administrative Area.

The Command Center also appears quiet, as does its adjacent support area and the nearby security forces barracks, with no vehicles or personnel visible in the area. (See Figures 5 and 6)

Figure 5. No personnel or vehicles observed at the Command Center.

Figure 6. No personnel or vehicles at the security forces barracks near the Command Center.

There appears to be a small group of personnel gathered in the courtyard of the South Support Area, but no vehicles are visible. (See Figure 7)

The appearance of a significant number of mining carts parked out on the West Portal’s spoil pile is unusual and its purpose remains unknown. Given Kim Jong Un’s announcement, it may be the first visible indication that North Korea intends to cease further tunneling at the Punggye-ri Nuclear Test Site. Such an assessment is purely speculative at this point, requiring additional imagery and analysis over the coming days and weeks to determine if this is indeed the case, and whether or not the Punggye-ri nuclear site is actually being closed down.