Recent commercial satellite imagery indicates additional preparations for the announced closure of North Korea’s Punggye-ri Nuclear Test Site that could take place in the next few days, depending on weather. The most notable development is the near completion of a probable observation platform/viewing stand to allow journalists to safely view the explosive closure of the North and West Portals (a view of the South Portal from that position might be blocked by trees). Additional improvements were also made to the road and pathway leading up to that probable observation platform. A separate, less elaborate observation position has been placed on a hillside directly across the valley from the South Portal, providing a clear view of that area, particularly after the recent clearing of some trees in that area as well.

Other notable changes include:

Probable Observation Platform on Hillside Near the West Portal

In our last report, we described what appeared to be the ongoing construction for a possible observation platform for visitors to safely view the explosive closures of the Punggye-ri portal areas. Significant alterations have been made since that time that now give the structure a more finished look (Figure 1). Work continues on both the improved pathway (that may include stairs) up from the dirt access road, and new gravel appears to have been added in some sections of the dirt road for surface improvement.

Figure 1. Work has progressed on the probable observation platform near the West Portal. 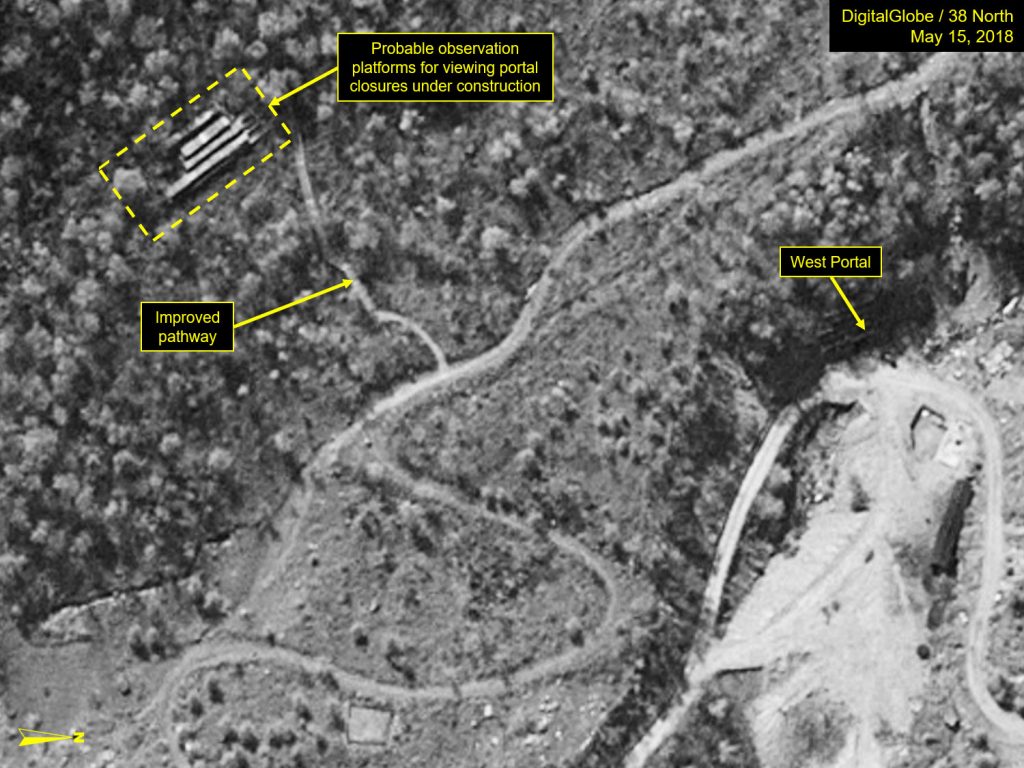 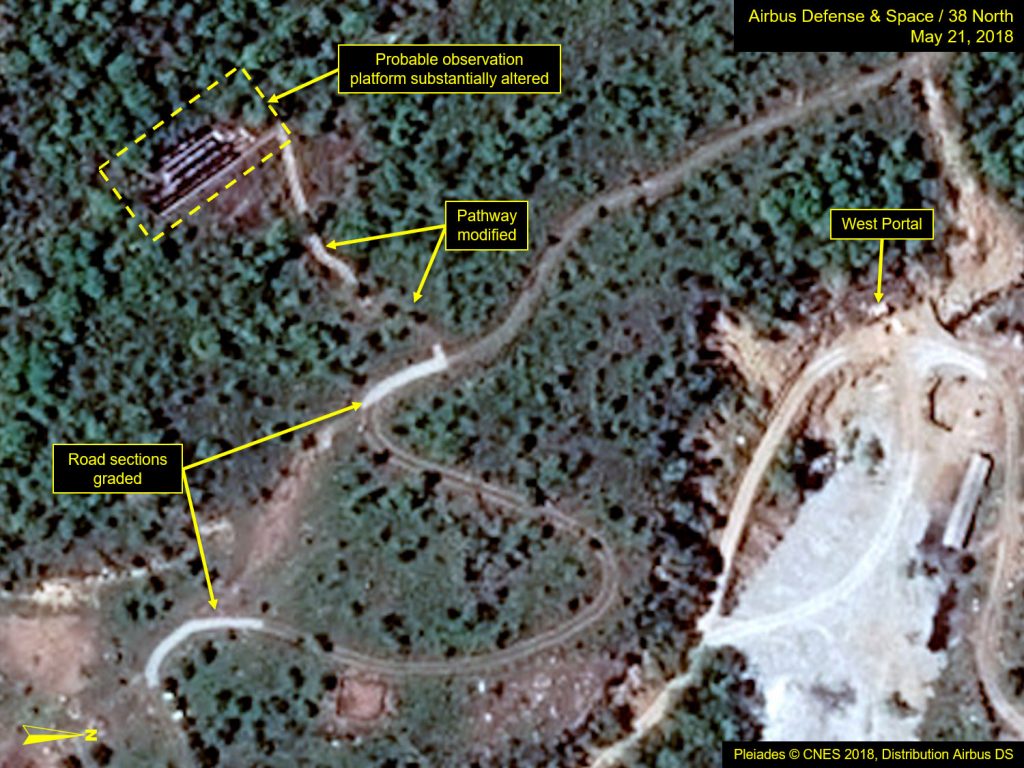 A Second Possible Viewing Position Identified Across from the South Portal

Although our previous assessment showed that the line-of-sight from the probable observation platform near the West Portal included clear views of the North, West and South Portals (from a purely terrain perspective), it now appears that the view of the South Portal might be blocked by trees. A second possible viewing position, which is situated with a clear line-of-sight to the South Portal appears to have been constructed on a hillside directly across the valley (Figure 2). Since May 7, some trees, previously located downhill from that position and likely blocking a line-of-sight, have been cleared as well.

Figure 2. A possible second observation platform has been erected near the South Portal.

At the North Portal, a small white shed has recently been constructed behind the probable compressor building (Figure 3).

Figure 3. A new shed has been erected near the North Portal.

A small white shelter may have been erected over the West Portal tunnel entrance (Figure 4).

Figure 4. A new shelter may have been erected over the West Portal tunnel entrance.

A small white shed has also been constructed near the South Portal. Given that the shed is encompassed by a wall or berm, its appearance is at least suggestive that it could be designed to store chemical explosives in preparation for the explosive closure of the portals. Additionally, two dark toned vehicles are parked on the recently expanded apron area that is located on the remains of the South Portal spoil pile, and a large white truck is parked nearby (Figure 5).

Figure 5. A small shed has been erected near the South Portal.

Several minor support buildings have been removed since our last report, primarily behind what are likely to be dining halls for onsite personnel. However, they have been replaced by a significant and quite unusual landscaping effort that includes the planting of hundreds of small trees or bushes (Figure 6). A large cargo truck is observed exiting the lower courtyard and a number of small, unidentified, objects, possibly pallets or crates, are present in the lower courtyard and in front of a probable dining hall.

Figure 6. Buildings have been razed and significant landscaping has taken place at the Main Administrative Area. 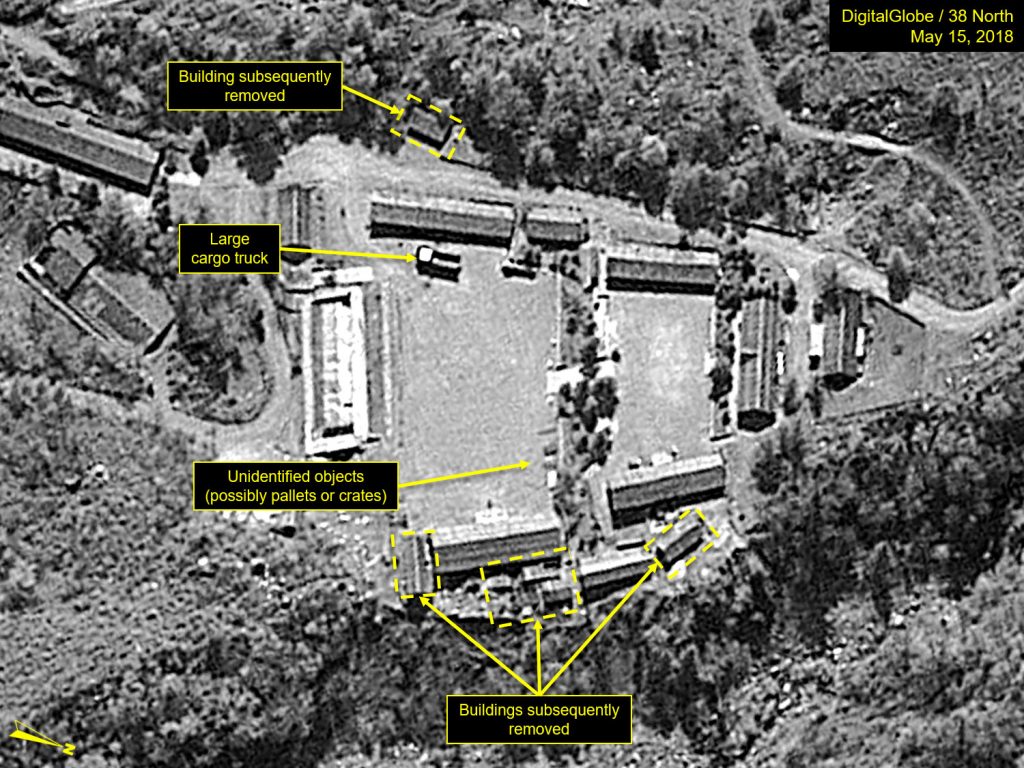 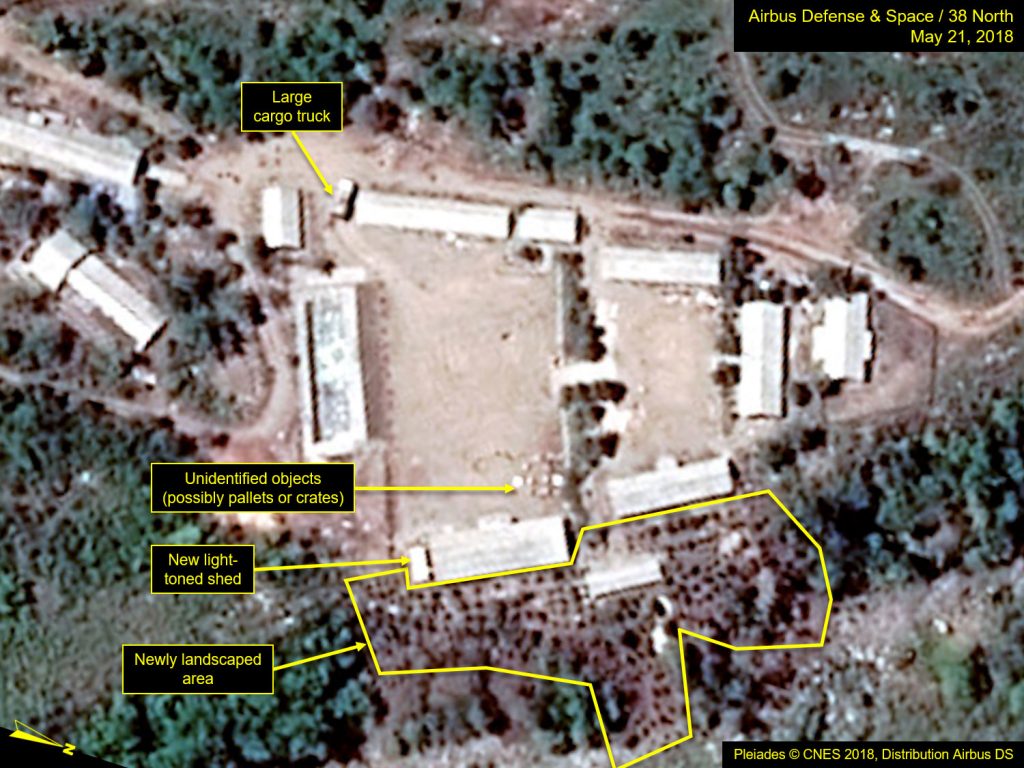 Four of the five vehicles that had been parked in the Command Center courtyard are no longer present. Those vehicles might be the same as those noted at the South Portal area. There is no other significant activity to report in any of the other surrounding support areas.