North Korea completed the destruction of the last three remaining tunnels as well as a number of buildings at the Punggye-ri Nuclear Test Site on May 24. As part of the site destruction, foreign journalists at Punggye-ri were shown a large-scale topographic map displaying the layout of the tunnels used to conduct North Korea’s six acknowledged underground nuclear tests and the steps undertaken to shut down the site. The map provided never before seen details and admissions regarding the suspected test tunnel trajectories and the precise geolocations of each of the six tests confirming previous analyses by outside experts. It also provided no indication of a secondary portal in the South Portal area, which we had previously suspected might be present.

However, a number of important questions remain that go to the issue of whether the destruction of Punggye-ri is irreversible.

These lingering questions point to the need for a more detailed and methodical effort by experts to insure the test site closure is as irreversible as possible.

Commercial satellite imagery from May 23 and May 28 showed the final preparations before, and the results of the explosive closure of North Korea’s Punggye-ri Nuclear Test Site afterward as witnessed by foreign journalists.

Imagery before the demolition shows:

Figure 1. Overview of the Portal Areas at the Punggye-ri Nuclear Test Site. 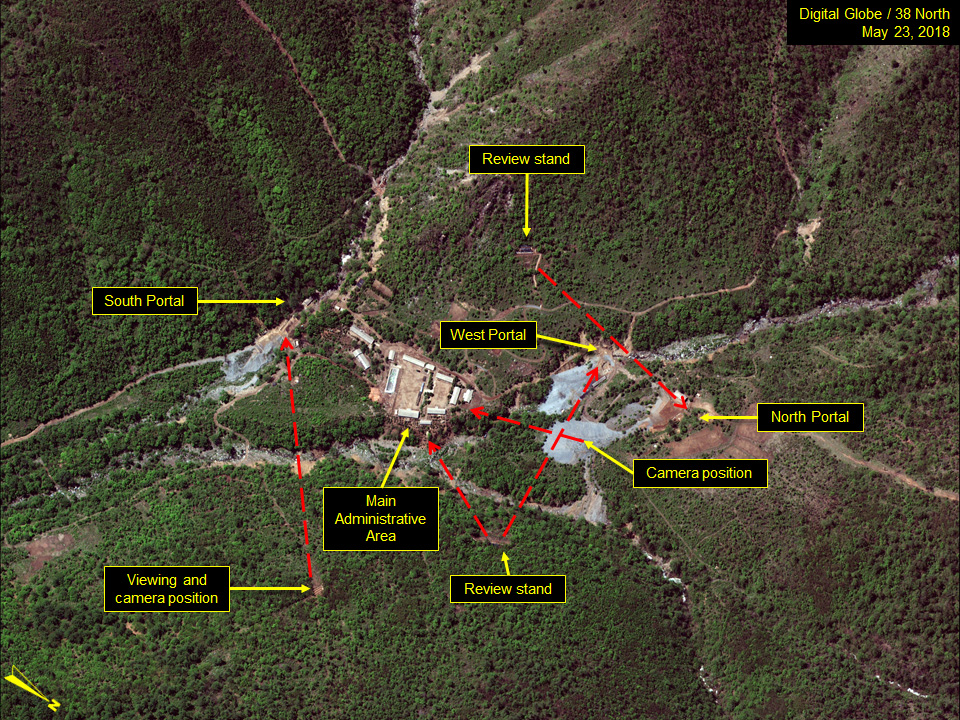 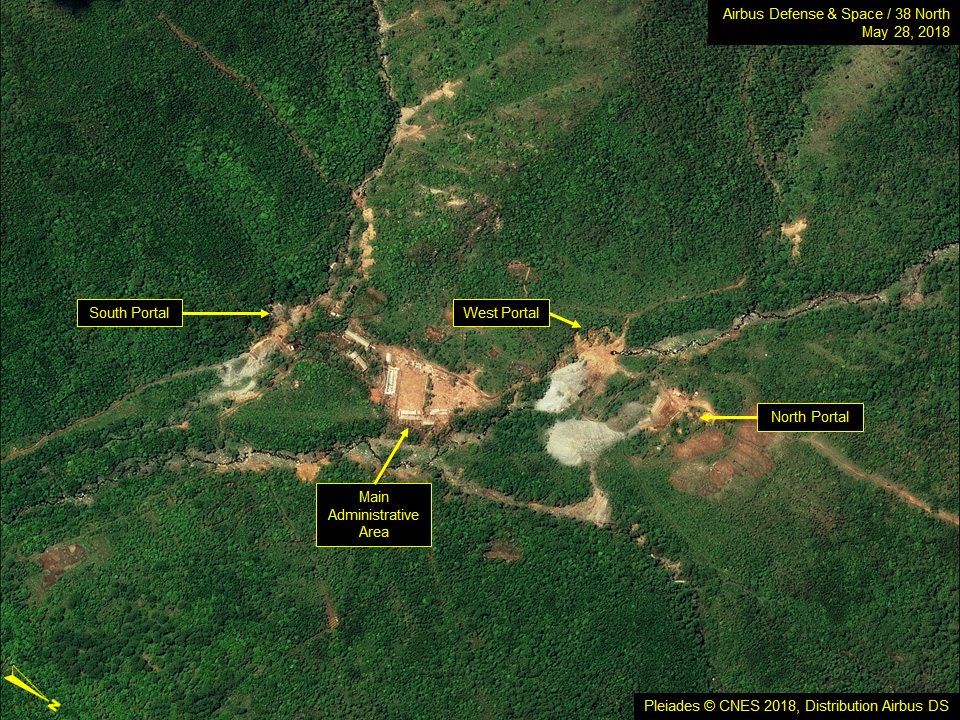 Figure 1 provides an overview of the northern section of the Punggye-ri Nuclear Test Site showing the areas of the test site visited by foreign journalists and the views afforded from each camera position. Those four areas viewed and toured pre-and post-demolition included the North Portal Area, the West Portal Area, the South Portal Area and the centrally located Main Administrative Area.

Between May 21 and May 23, discernable changes involved the completion of a new small white shed similar to those at the other three areas which were likely intended as visitor rest houses, new grading of the area directly in front of the North Portal and the planting of bushes out on the spoil pile.

Imagery from May 28 shows the North Portal had been explosively closed and the nearby “measurement/recording” building was blown up as well. There was no evidence provided to the journalists to determine what role the building actually served, but we have previously identified the structure as compressor building to provide ventilation to the tunnel system. (Figure 2)

Figure 2. North Portal area before and after dismantlement. 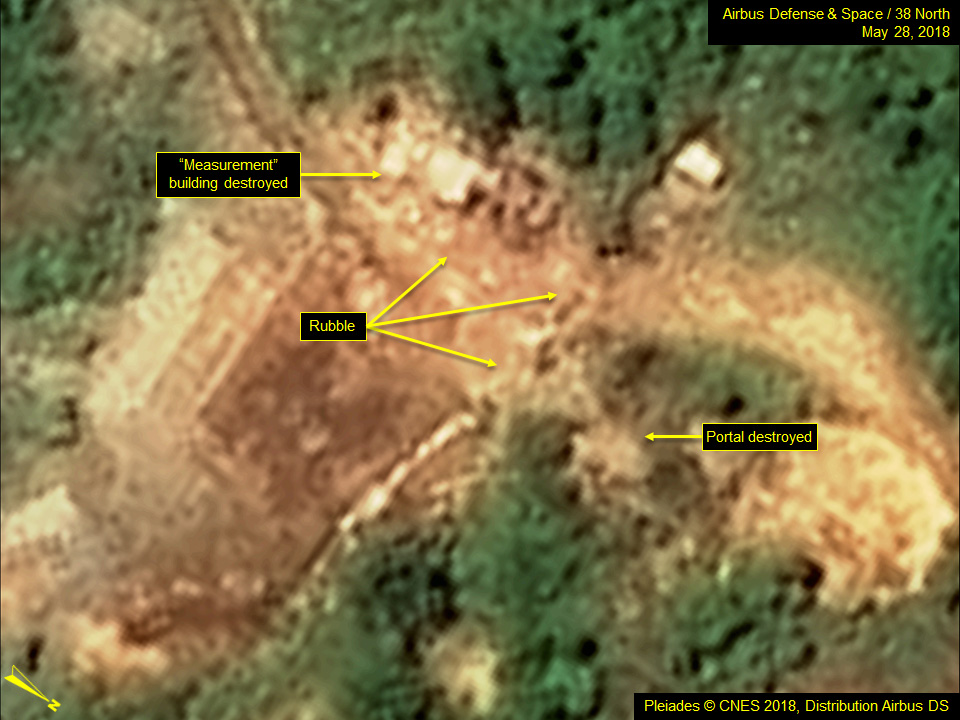 By May 23, what we had thought was a new shelter erected directly over the West Portal tunnel entrance was shown in ground imagery to be a new camouflage-painted entrance façade with doors to enclose the portal. Both the façade and the portal it enclosed, along with the entire surrounding terraced hillside, were destroyed with chemical explosives. (Figure 3)

Figure 3. West Portal area before and after dismantlement. 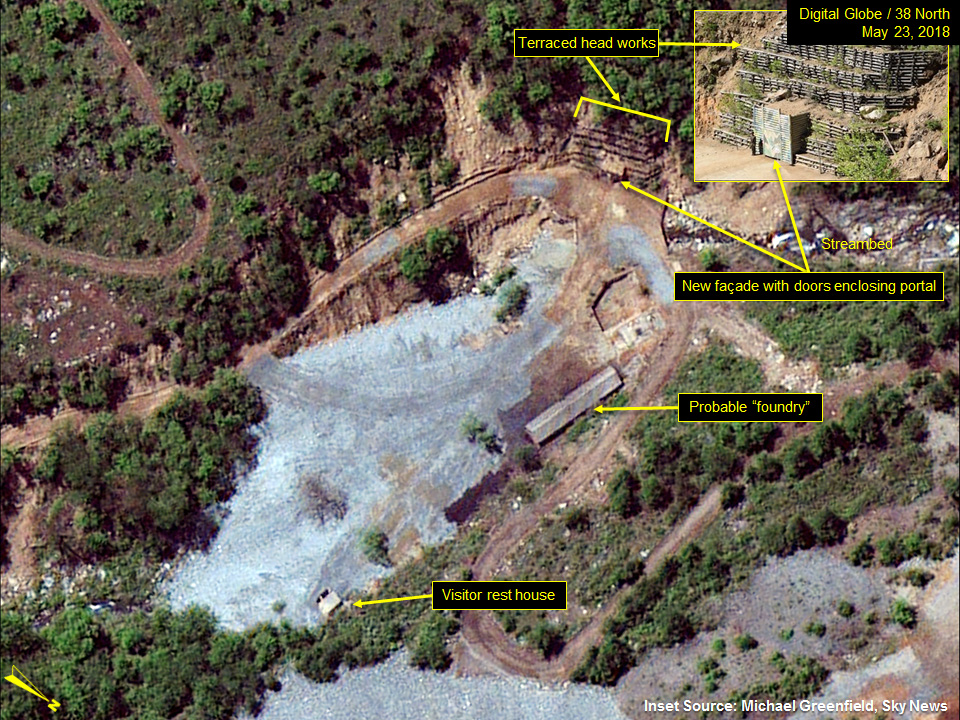 The South Portal Area had also been cleaned up with new landscaping and guardrails in some locations. It has always been difficult to precisely locate the portal (entrance) in this area due to thick tree cover and shadows and there was some evidence to suggest that there could be a secondary portal nearby. However, the North Koreans only acknowledged and destroyed what had earlier been identified as the primary portal. (Figure 4)

Figure 4. South Portal area (primary portal) before and after dismantlement. 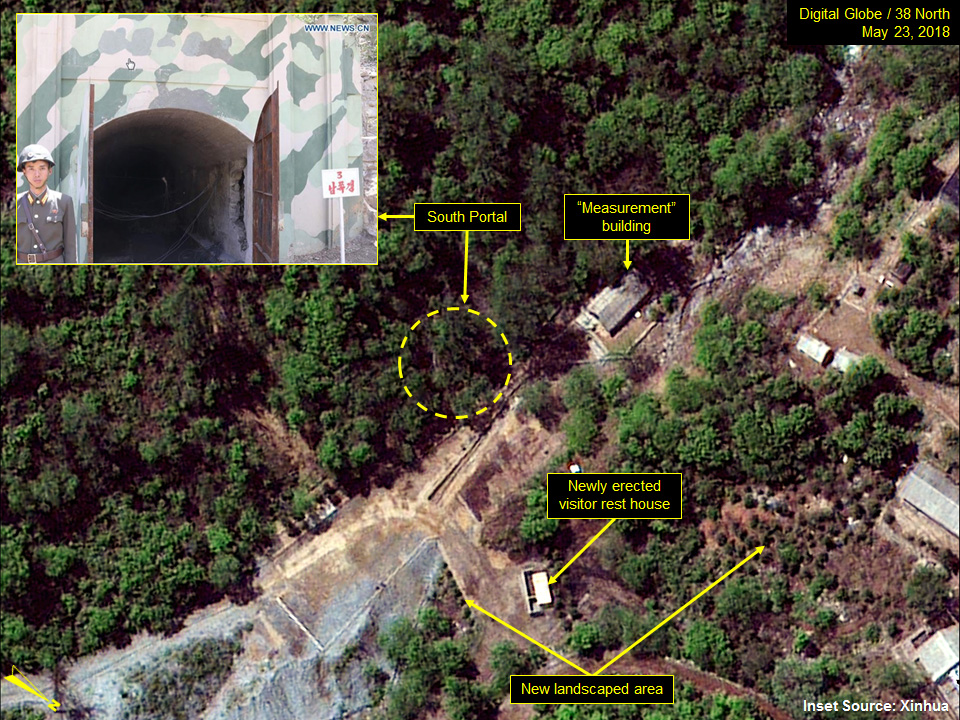 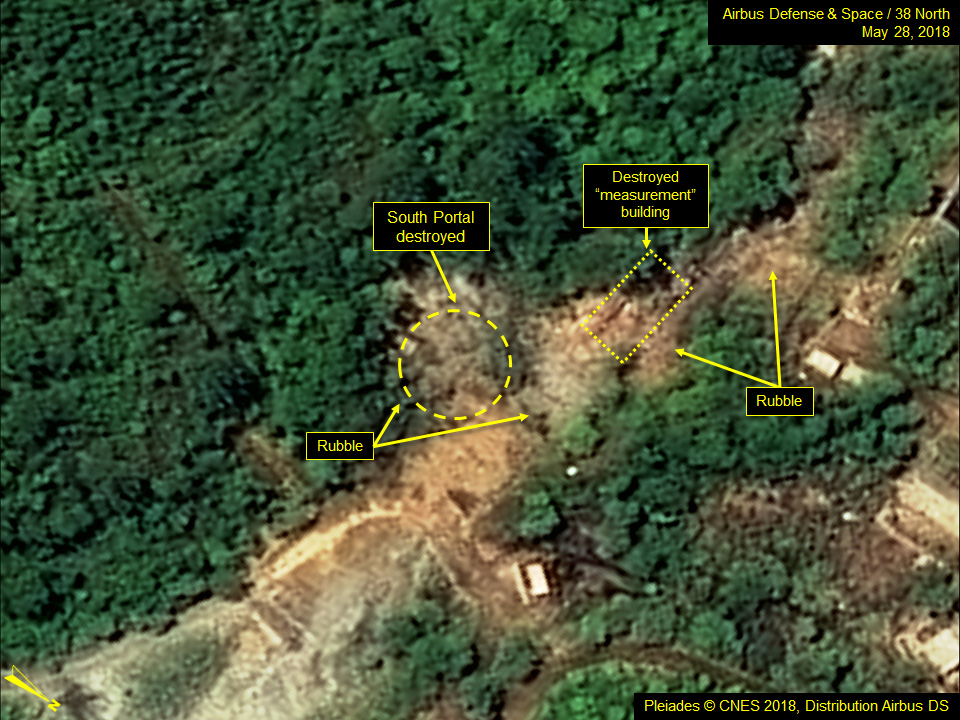 Imagery from May 23 and prior to the demolition of the area the next day shows a new line of tents and covered canopies in the lower courtyard, which most likely served as a welcoming venue. The pallets and crates previously noted were likely associated with those tents/canopies. Several minor support buildings had been removed, primarily behind what are likely to be onsite personnel dining halls, replaced by a significant landscaping effort involving the planting of dozens of small trees or bushes.

Figure 5. Main Administration Area before and after dismantlement. 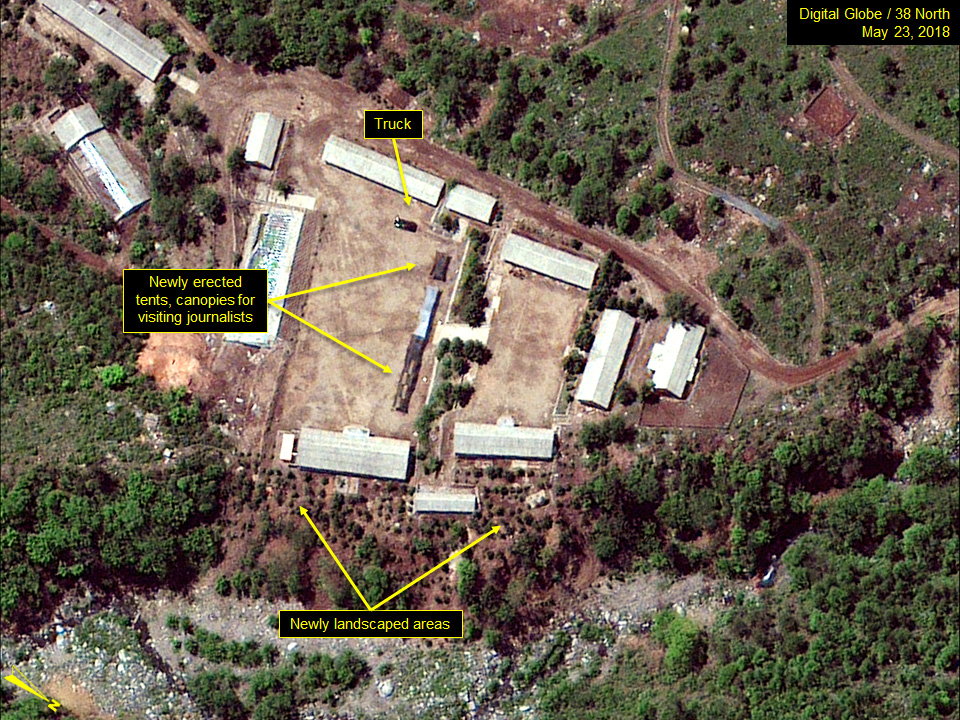 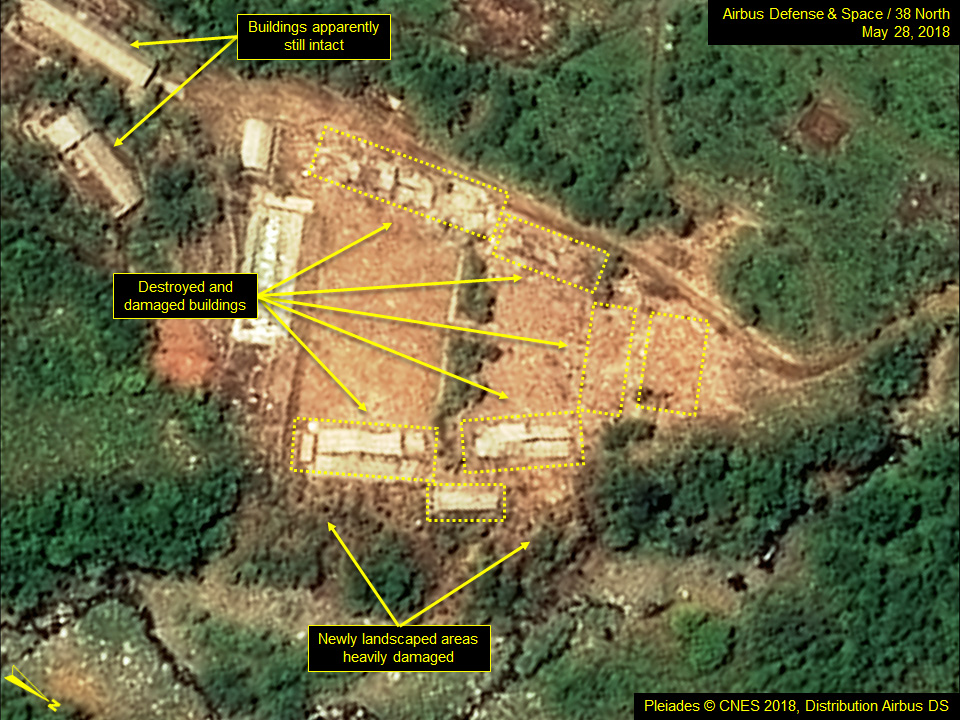 The two main buildings at the Command Center, a two-story Headquarters Building and a one-story building adjacent to it remain intact. The four vehicles previously parked in the Command Center courtyard on May 23 were no longer present on May 28. (Figure 6) 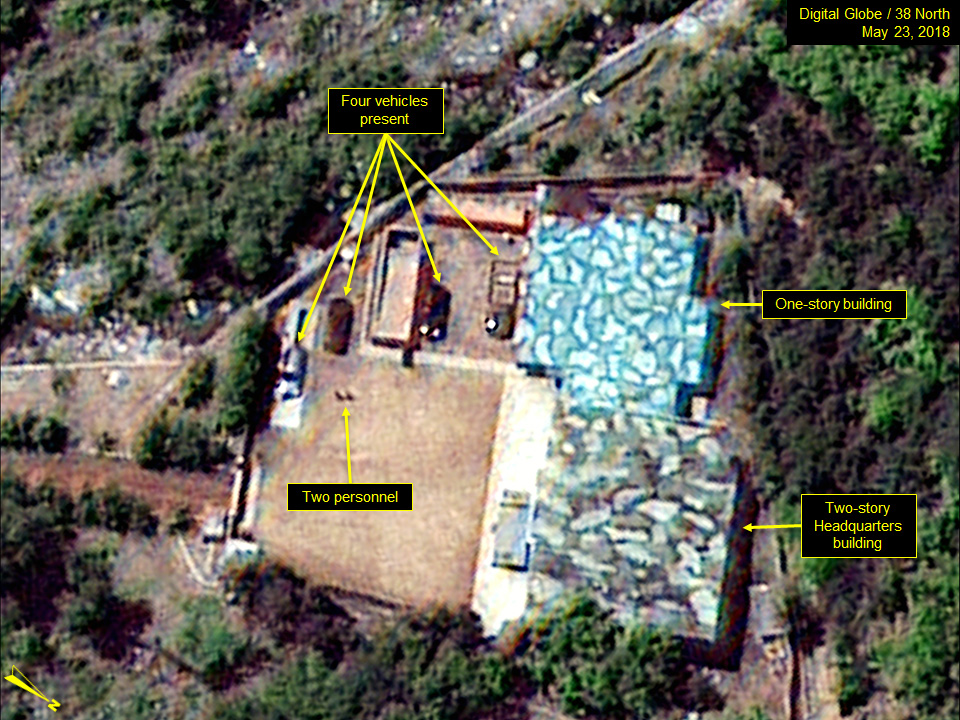 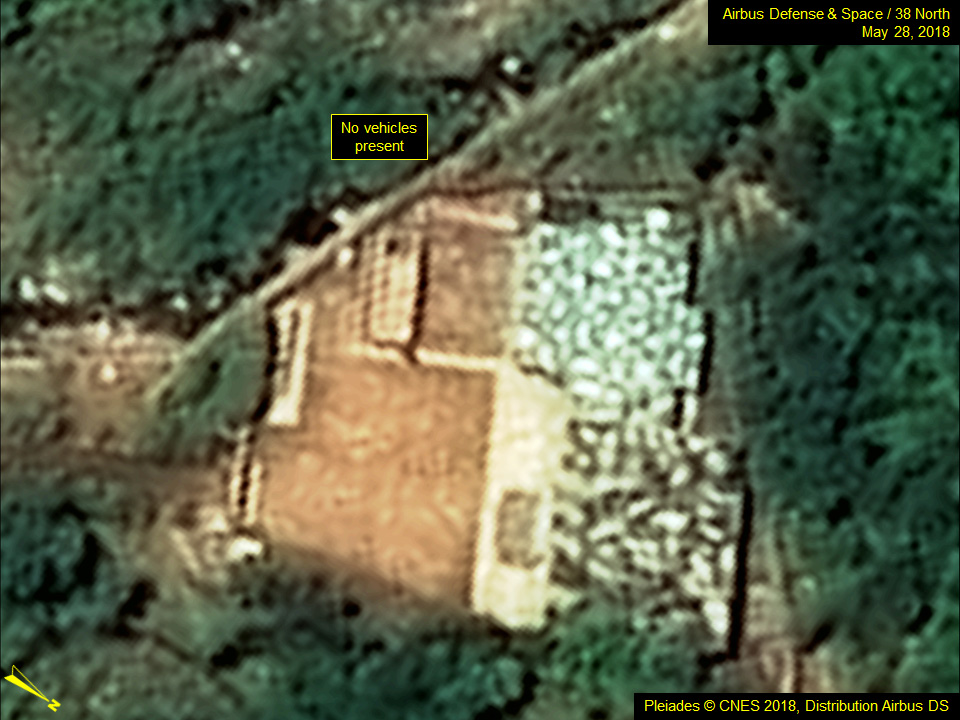 Other support and barracks type buildings in the Command Center Support Area, the guard barracks nearby the security checkpoint located on the main access road to the Portals Area and the Southern Support Area were all still intact as of May 28.

When visiting journalists were briefed on the dismantlement of the Punggye-ri nuclear test site on May 24, the North Koreans displayed a large scale topographic map of the Northern Sector of the test site showing the areas that were about to be demolished. The annotated map also provided details on the tunnel entrance locations, the trajectory of tunnel excavations, along with what was purported to be the layout of the two tunnels at the East and North Portals used to conduct North Korea’s six acknowledged underground nuclear tests. It also showed the two other tunnels prepared for, but never employed in, nuclear testing at the South and West Portals. (Figure 7)

In addition, the map displayed the geospatial locations of the epicenters for each test, which had never before been revealed. Those geospatial locations compared favorably, varying from only a few tens of meters to no more than about 500 meters, with those independently derived by various researchers using relative seismic location analysis together with satellite based synthetic aperture radar data and commercial satellite electro-optical imagery.[1] (Figure 8) 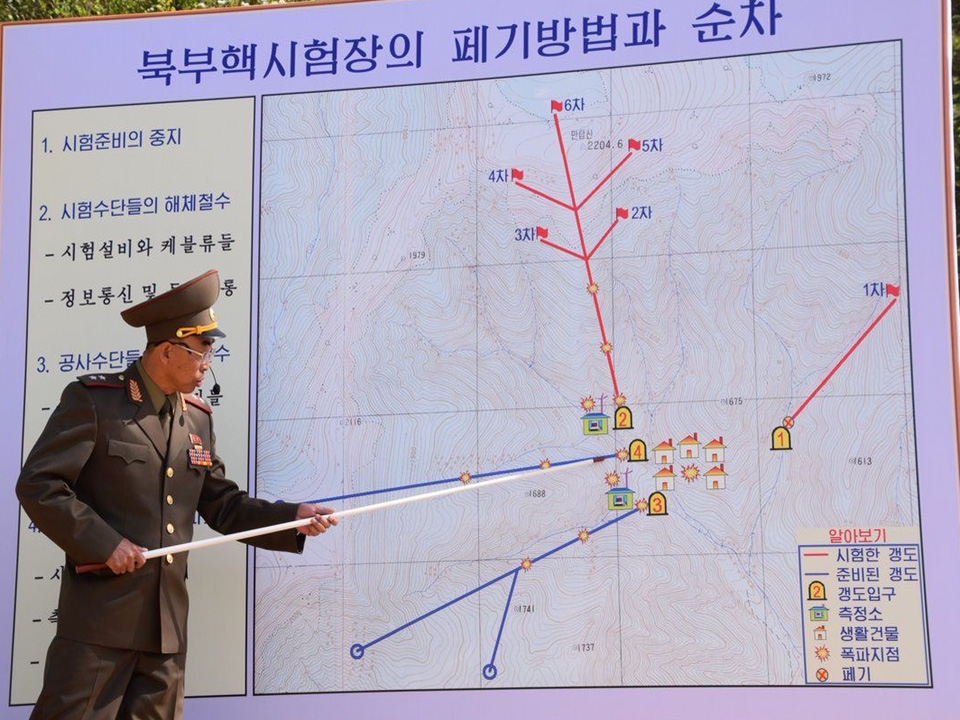 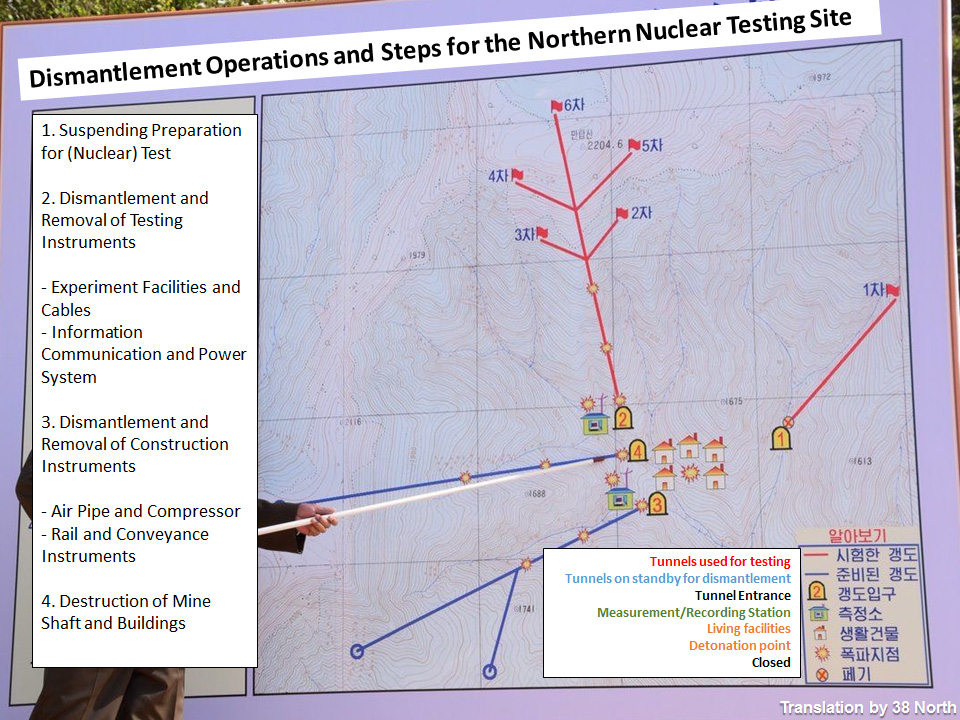 The locations for all five tests involving the North Portal progressed sequentially up the mountain, culminating with the 2017 test located directly under the peak of Mt. Mantap as had been generally supposed. Apart from the lack of engineered containment features (e.g., zig-zags or a fish-hook terminus at the end of each drift) shown in Figure 8, the general trajectories of all four of the tunnel systems also seem to match well with those previously conjectured by 38 North and other outside observers. The progression towards greater depth of burial (amount of rock above the test point) of the last five tests conducted via the North Portal also matches our previously published cross-section diagram. (Figure 9)

Figure 9. Cross-section diagram of the North Portal and Mt. Mantap.

It is also significant to note that our cross-section diagram shows that the depth of burial under Mt. Mantap is about 800 meters. We had previously calculated that such a depth could successfully contain a test having a yield just above one quarter of a megaton. However, that 800 meter depth is at complete odds with a recent peer reviewed Science journal article that estimated the explosive source to be only “450 ± 100 m below the top of Mt. Mantap.” Given that the authors’ estimated epicenter depth was used in their 3D seismic modeling to explain the detected rise, collapse and compaction of Mt. Mantap, such a large discrepancy should be taken into consideration when reviewing the findings presented in that paper.

The incomplete data provided by the North Koreans, however, raises a critical question that goes to the issue of how irreversible the destruction of the test site really is. Why is the accumulated spoil outside of the North Portal since 2013 so much greater in volume when compared to that in front of the West Portal, when the West Portal is claimed to be ~2500 meters deep, while the tunnel sections involved in tests since 2013 amount to only ~2000 meters total according to the DPRK map? While measuring spoil piles is a commonly used tool to determine the scope of underground facilities, it is not fool proof. Nevertheless, it is possible, based on available data, that more tunneling took place under Mt. Mantap than the North Koreans have admitted thus far. “It should also be noted that at no time were the questions ever addressed regarding the detected prompt radiation leak from the first test in 2006, and the delayed radionuclide release from the third test in 2013. Moreover, no environmental sampling was undertaken, and visiting journalists were prevented from carrying portable radiation detectors before traveling to the test site.