Analysis of ground photos and video taken at North Korea’s Punggye-ri Nuclear Test Site (courtesy of Sky News) from the recent site closing event can confirm only that the test tunnel entrances were sealed. At most, two other point detonations were carried out (as was claimed) in each of the three tunnels, while the tunnel branches probably remain intact. While the procedures carried out by the North Koreans will make reusing the site difficult in the future, regaining access to the completed test tunnels at the South and West Portals may still be possible. However, enough demolition has been done that, if North Korea chose to reopen the test site, major excavation as well as construction of at least some support structures would be needed, and such activity would almost certainly be detectable via satellite imagery.

Additionally, video footage points to at least one potential discrepancy in the tunnel schematics shown to reporters, suggesting there was likely a second bypass tunnel at the North Portal instead of the displayed single tunnel with five branches.

Finally, the ground photos not only provide some interesting insights into the surface composition of Mt. Mantap and the overall site terrain, but also interesting quirks about North Korea’s efforts to accommodate international visitors during the site closure, such as grapevine art on a retaining wall outside the North Portal.

Before the demolition of the nuclear test site began, international reporters were shown a detailed topographical map providing a non-engineering schematic of the test tunnels with the six test locations clearly highlighted. For each of the active tunnels systems (originating at the North, West and South Portals),[1] three planned explosive points were identified, one at the entrance and two deeper into the tunnels but stopping short of the tunnel branches (where applicable). Video footage confirmed that at least two detonations took place at each of these tunnels, roughly 15 seconds apart.

Figure 2. Views of all three tunnel entrances wired for demolition.

Figure 3. Close up of demolition pack embedded in a wall at the West Portal.

From the ground photos, a substantial landslide scarp was visible directly above the mapped tunnel (Tunnel No. 2) that leads towards Mt. Mantap from the North Portal. We had previously labeled that landslide as a possible borrow pit for stemming material. Moreover, video taken during the explosive demolition of the North Portal showed that there were additional landslides which also extended that scarp. The presence of such an unstable section, situated directly above the original tunnel trajectory, reinforces our belief that there must have been a second bypass tunnel dug via the North Portal, given that an entirely new, much larger spoil pile was created after the 2013 nuclear test, from which a delayed radionuclide release was detected. 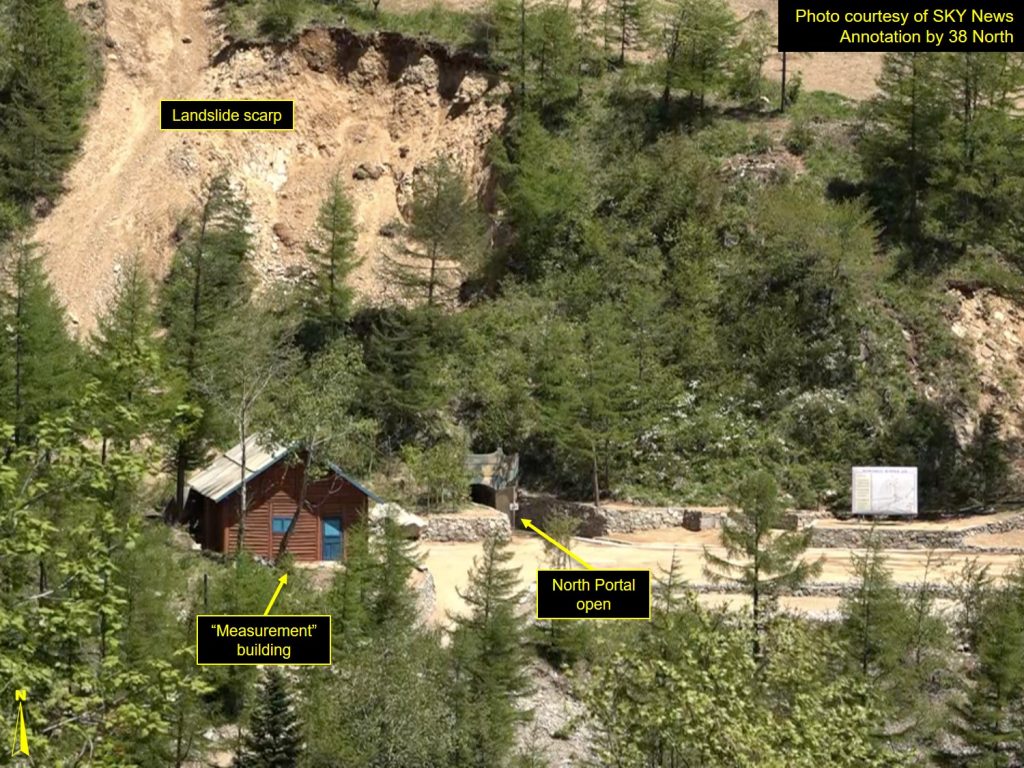 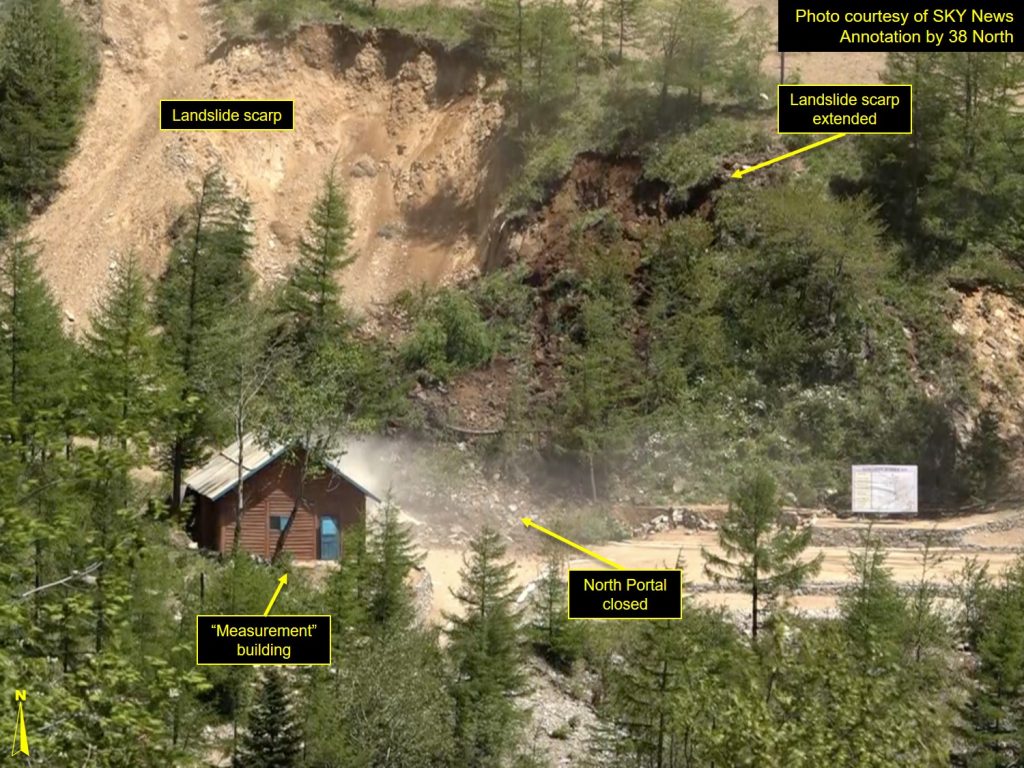 The Geology of Mt. Mantap

The North Korean tunnel schematic map shown to the foreign reporters also provided indications of some surface geologic mapping near the peak of Mt. Mantap. One dotted line is shown roughly 200 meters below the peak, while another dotted line lies near the peak and the basalt cap geologic boundary. The area of the map between the lines is also colored a soft beige (versus greenish-white elsewhere), which also covers much of what has been previously mapped as a stratified volcanics layer. That delineated area was also labeled at various intervals with a capital “Q,” which likely signifies the geology is most recent, dating to the geologic period known as the “Quaternary.”[2] It would seem that, for some unexplained reason, the North Koreans felt it necessary to map the boundaries of the surficial colluvium[3] deposits that have amassed downslope from the top basalt layer. Notably absent, however, were any indications of the older underlying geology in which the actual underground nuclear tests were conducted. 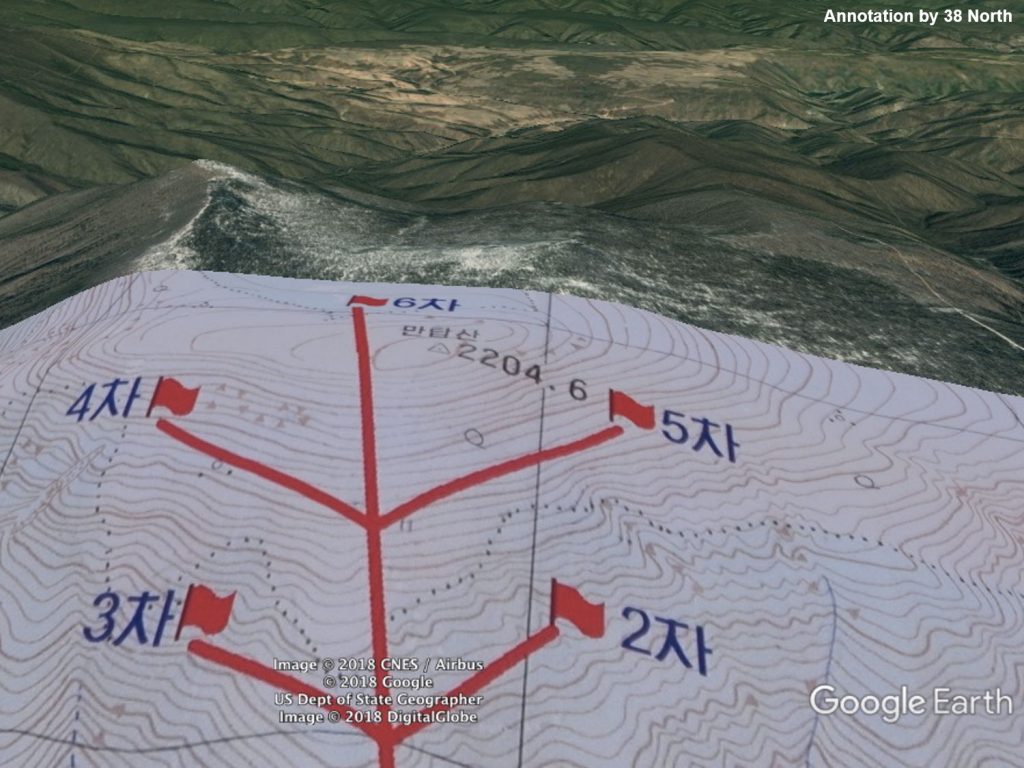 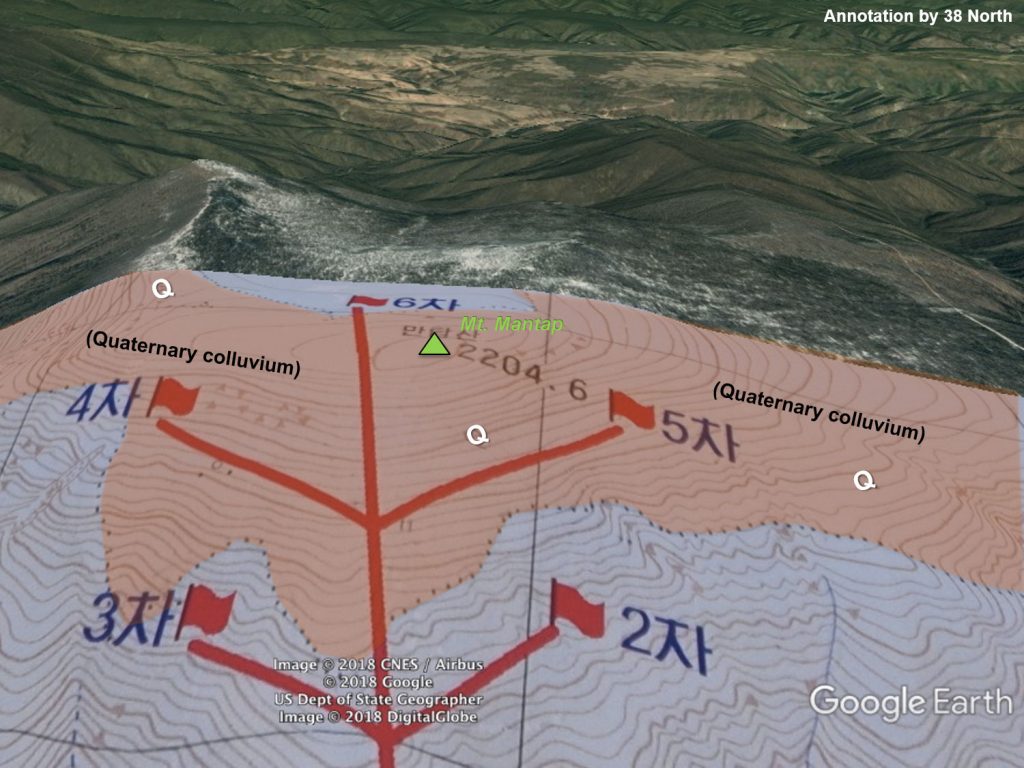 The ground photos, unlike satellite imagery, provide clarity on how steep the terrain is around the facility, underscoring why the site was originally chosen: maximum “rise” over “run” or in other words, a minimum amount of tunneling to get the maximum overburden for test chambers. For instance, while in satellite imagery the Main Administrative Area appears to be flat terrain, ground photos show clearly the terraced nature of this area with upper and lower courtyards.

Figure 7. The upper and lower courtyards of the Main Administrative Area before buildings were demolished.

When expecting international or VIP visitors, North Korea is often seen conducting beautification campaigns to make the site more accommodating and appealing. At Punggye-ri, during removal of small buildings and mining equipment, North Korea also planted bushes and sapling trees around the site and erected temporary shelters and restrooms. (However, the journalists were prohibited from going inside any of the main buildings as they were already wired with explosives.)

Figure 8. Canopies were set up for the journalists and temporary facilities were constructed. 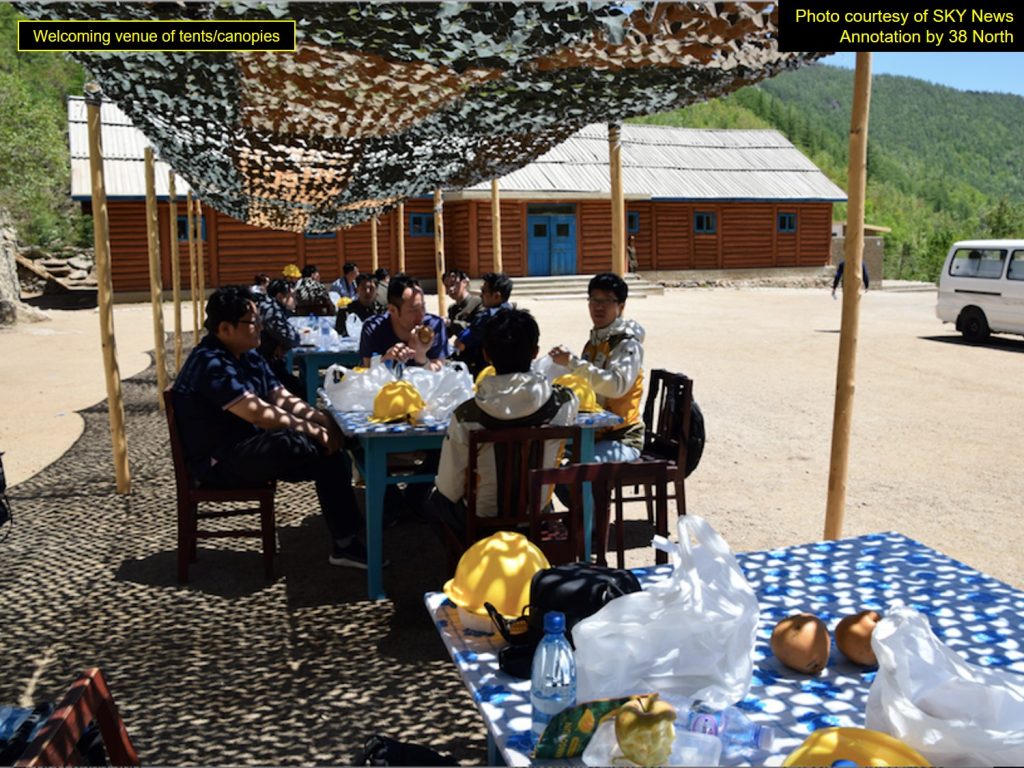 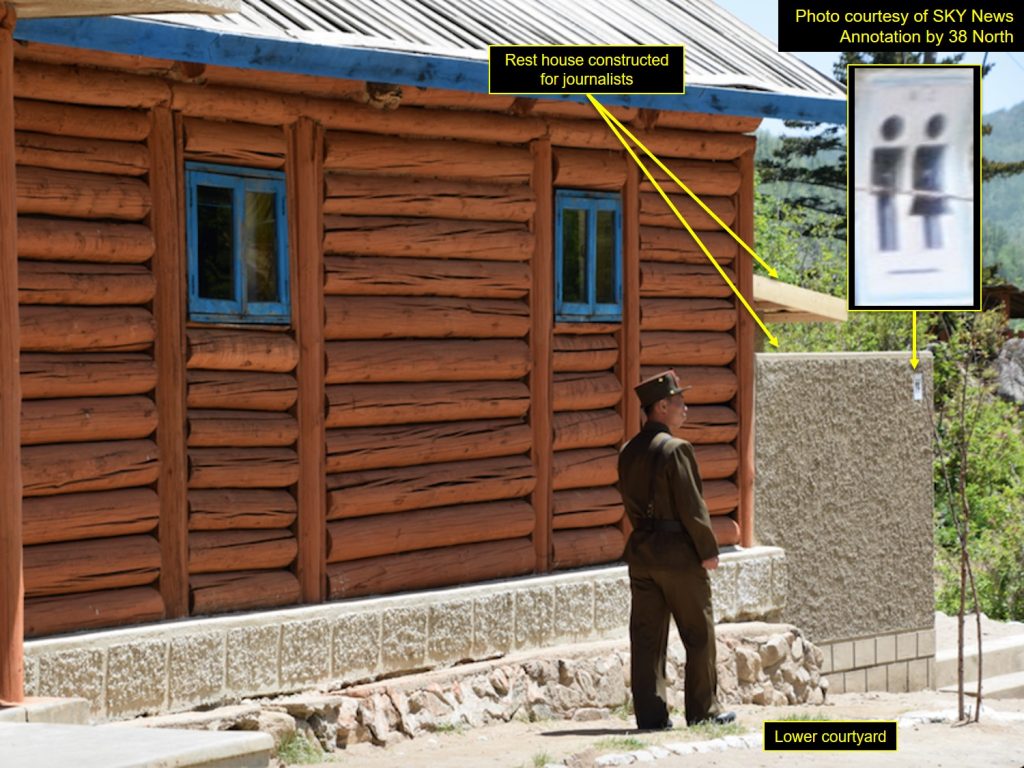 An interesting touch was this concrete bas-relief of grapes on a grapevine that was located on a retaining wall just outside of the North Portal.