Commercial satellite imagery of North Korea’s Yongbyon Nuclear Scientific Research Center from August 27 shows that dredging work continues around the probable new secondary cooling system for the 5 MWe reactor. Most notably, some of the dredged-up material was blocking about half of the river channel that serves the new pump house, indicating that the modified cooling system is likely inoperative. The purpose of the continued dredging remains unclear at this time.

Despite heavy rains and widespread flooding in North Korea in the past week, the nearby dam on the Kuryong River remains intact. The primary purpose of the dam is to create a reservoir of sufficient depth to provide a consistent level of water to the cooling systems of both the 5 MWe Reactor and the Experimental Light Water Reactor (ELWR) regardless of the river flow rates,[1] while also preventing the water level from rising above the tops of the water intake cisterns. As heavy rains and floods are common in North Korea’s summers, the dam has been designed to serve as a river-wide spillway in such situations. In recent imagery, overflow spillage is observed along the entire top of the dam.[2] The apparent functional success of the dam/spillway during the recent flooding should increase North Korea’s confidence that sufficient levels of cooling water can be consistently provided to both reactors throughout all seasons.

Commercial satellite imagery from August 27, although of moderate resolution (80 cm), indicates that dredging of the Kuryong River continues next to the new pump house associated with the 5 MWe Reactor’s secondary cooling system, suggesting that modifications may not be complete. (Figure 1) Most notably, that dredged material now blocks a large portion of the river channel serving the new pump house, indicating that the modified cooling system is likely inoperative and still incomplete. 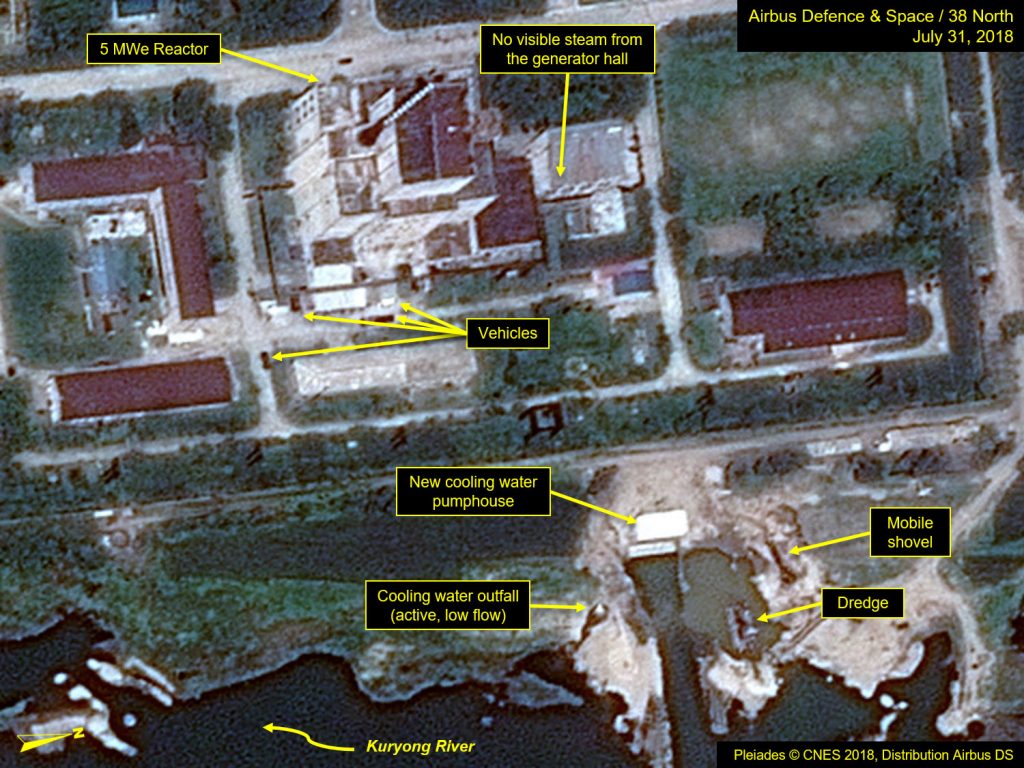 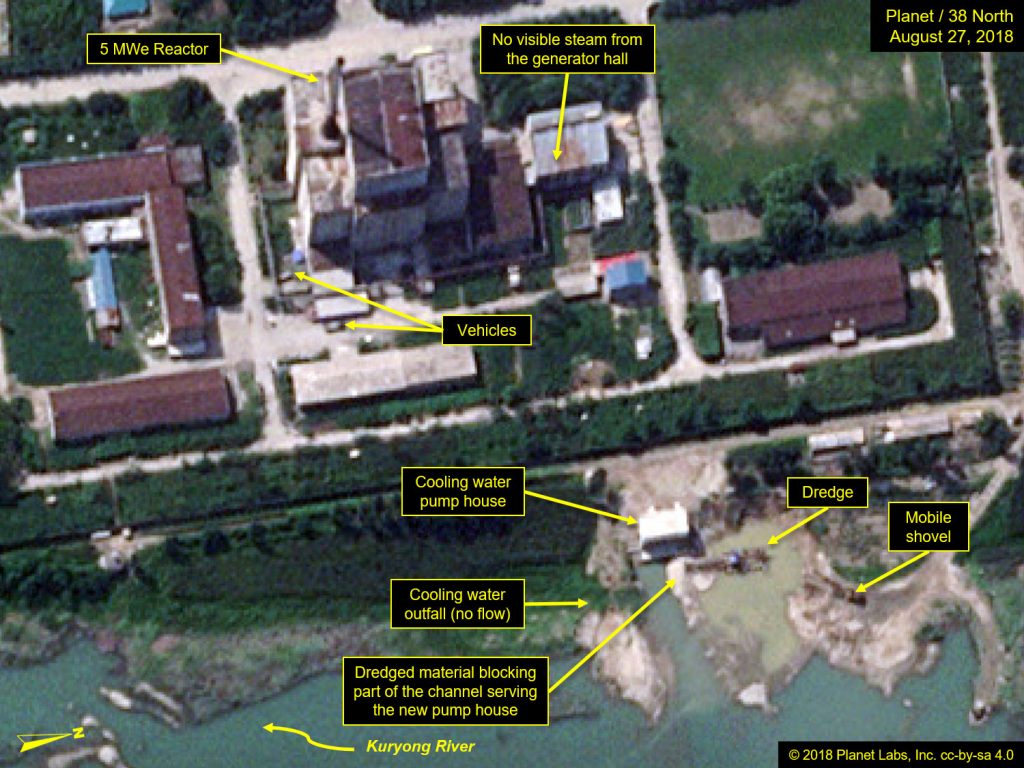 This continued dredging represents a literal “muddying of the waters,” which is not ideal around water intake cisterns. Its ultimate purpose remains unclear, but there may be some additional construction, possibly involving conduit material just north of the new pump house.

Imagery shows that vehicles continue to move within and around the ELWR and 5 MWe reactor areas, and a general cleanup effort seems underway. However, there are no observable indications that the ELWR has started operations. Additionally, a single-story support building near the ELWR’s new engineering office building that was partially razed in early March has now been completely dismantled and removed. (See Figure 2) 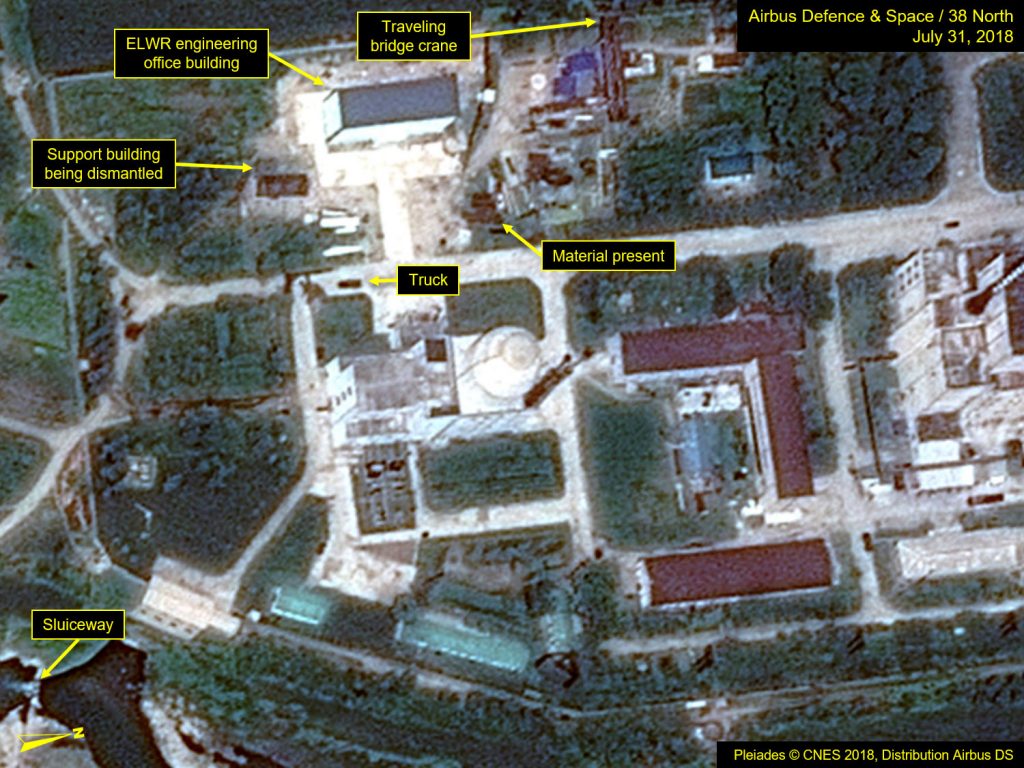 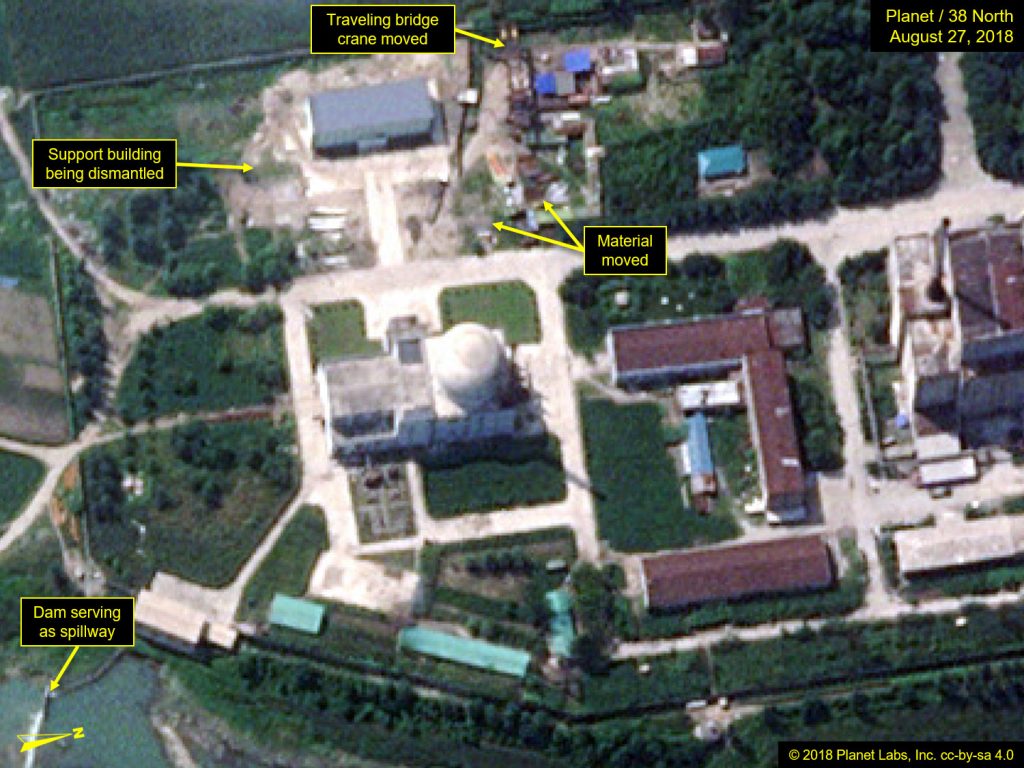 In our last report we noted some refurbishment work underway in late July on the Kuryong River dam. That dam has created a reservoir of limited, but sufficient depth to provide a consistent level of water to the cooling systems of both the 5 MWe plutonium production reactor and the ELWR regardless of the river flow rates, while also preventing the water level from rising above the tops of the water intake cisterns.

Recent heavy rains have raised flow rates on the Kuryong River, such that it has been spilling over the top of the reservoir dam. (Figure 3) More recent imagery from August 31 shows that the dam has continued to hold and serve as a water height limiting spillway. 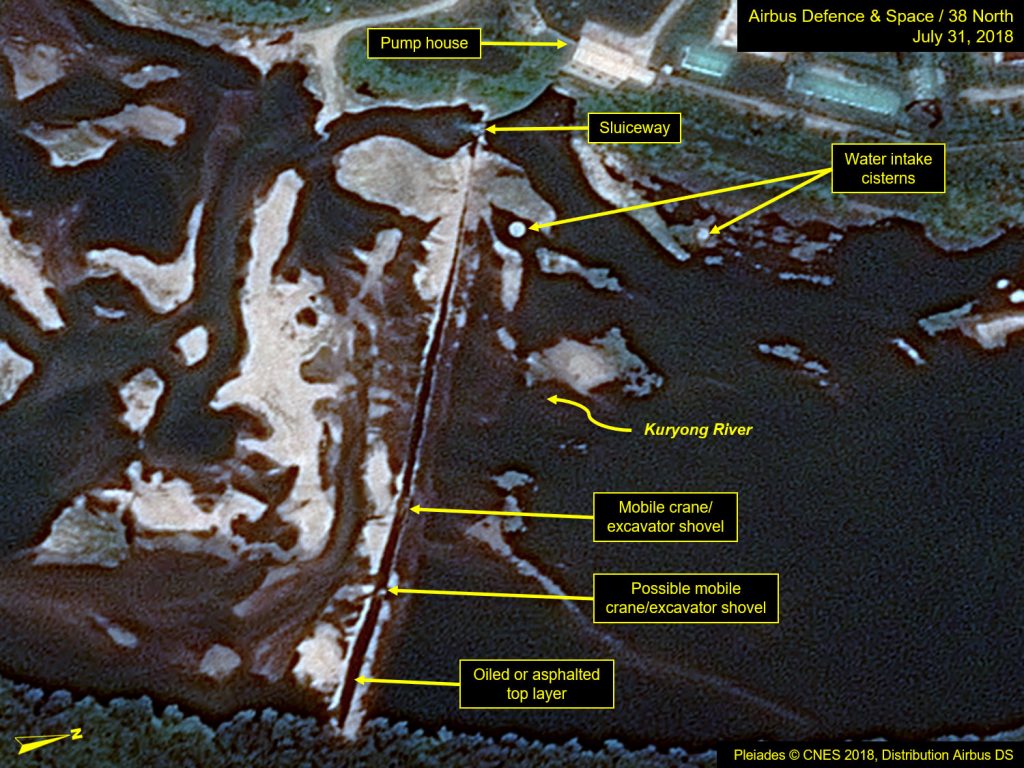 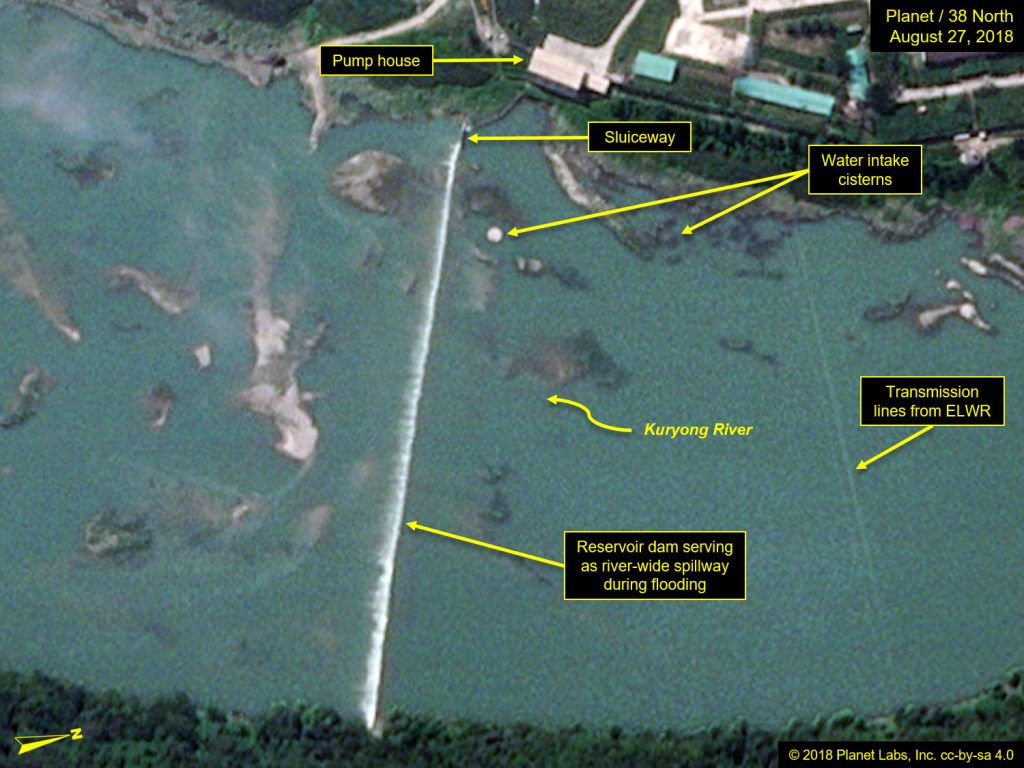 At the Radiochemical Laboratory, imagery over recent weeks has shown vehicles present at different locations around the site indicating that the site is, at the least, being maintained. On August 27, there were two vehicles in the motor pool area, one truck near the roadway entrance, and a vehicle or railcar near the off-loading platform near the fuel reception building. (Figure 4) Subsequent imagery from August 31 and September 1, though cloudy over much of Yongbyon, did provide a clear view of the Fuel Reception Area where some additional vehicle movements were noted.

What could be a mobile crane was observed on both August 31 and September 1 near where some small boxes/crates were previously observed in the vicinity of the off-loading platform near to the entrance of the fuel reception building. The purpose of this activity is unclear. (Figure 5)

What we last described as a possible anomalous plume coming from the ventilation building’s stack on July 31 has not been as clearly discernible since then. At the associated Thermal Plant, there appears to have been no new activity. 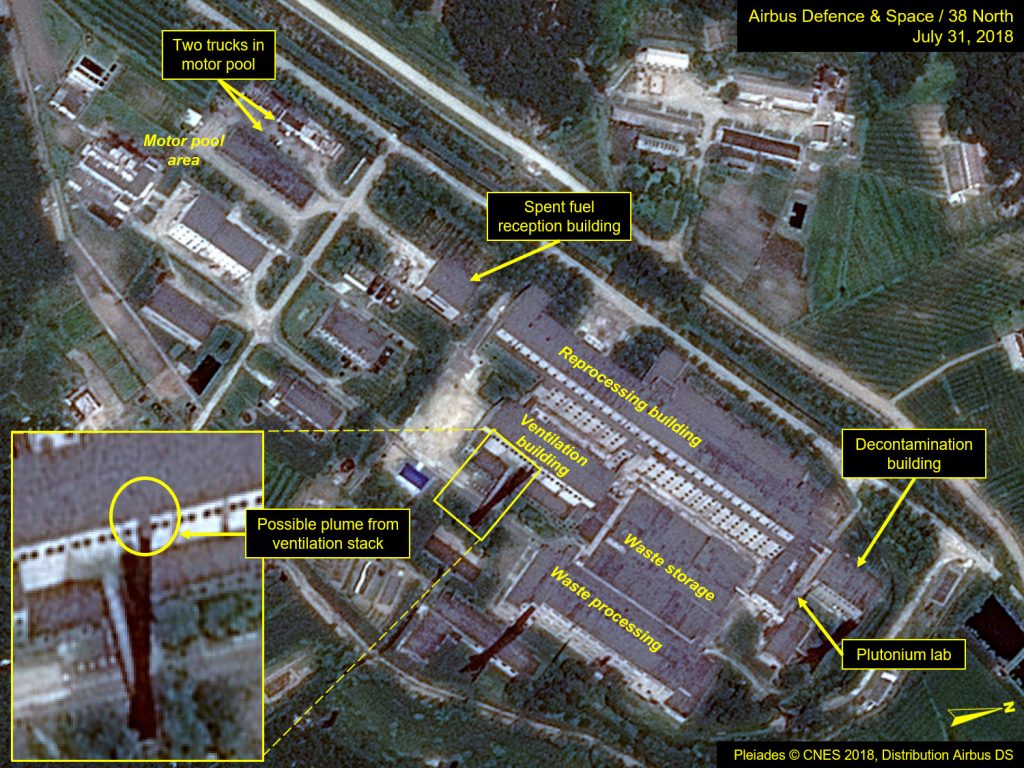 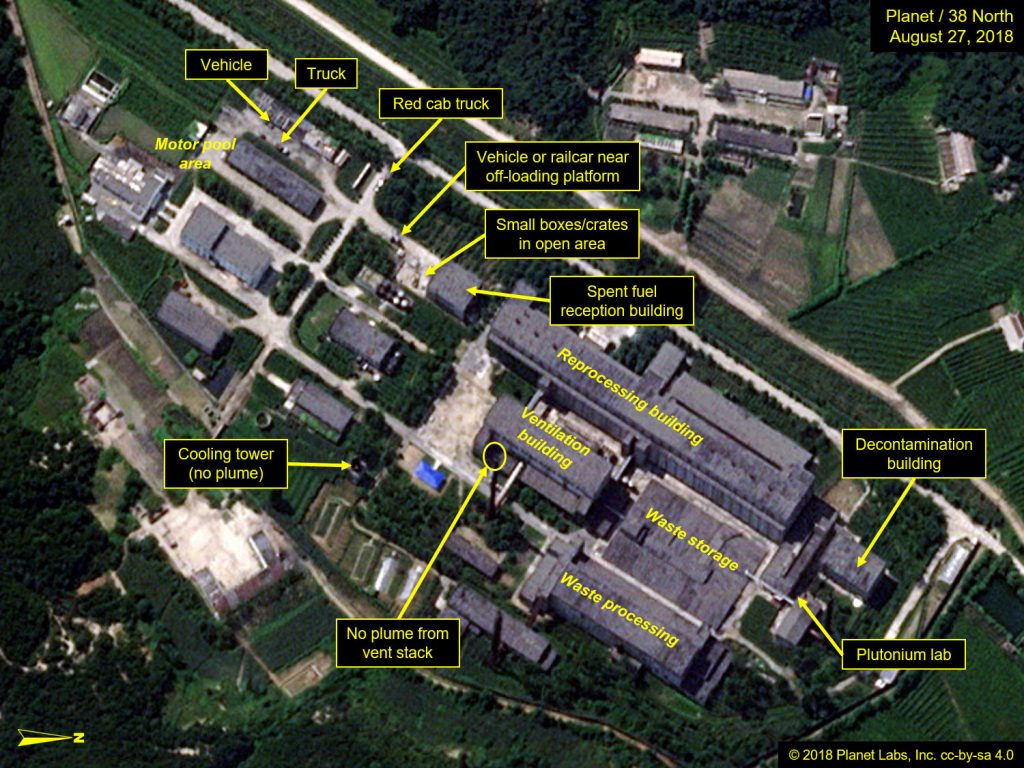 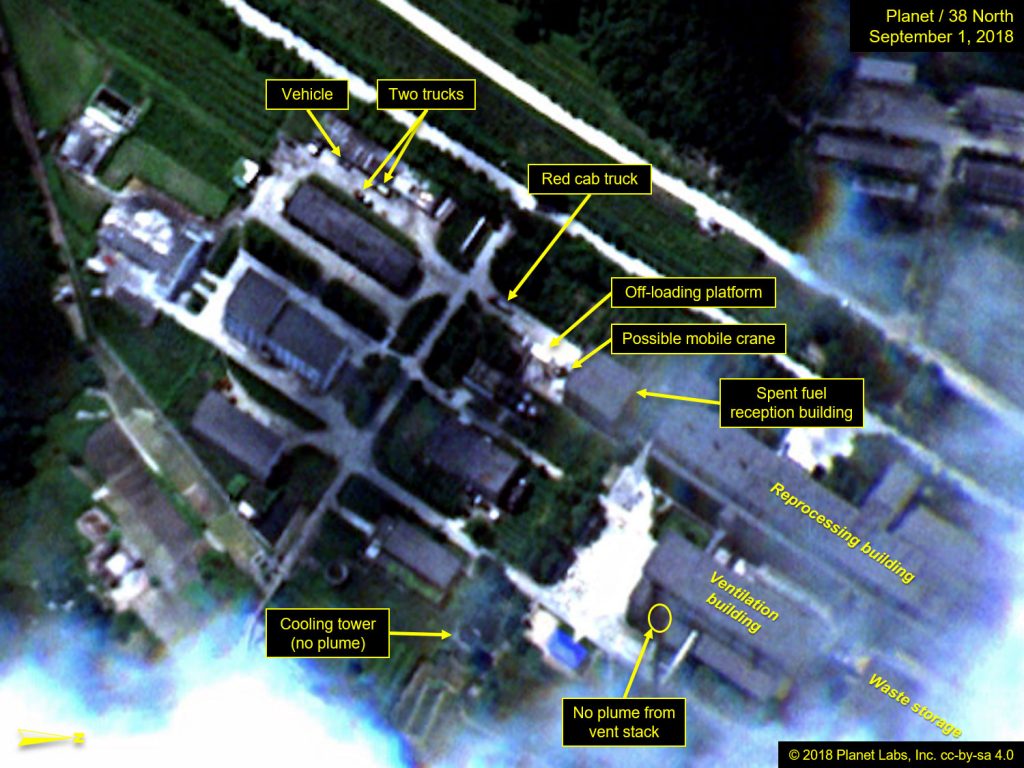 No significant activity was observed at the Uranium Enrichment Plant although there are now three piles of tan colored material in the courtyard. Based on past record of similar materials observed around Yongbyon, this may simply be drying grain, which has been harvested around the site to supplement food for onsite personnel. (Figure 6) 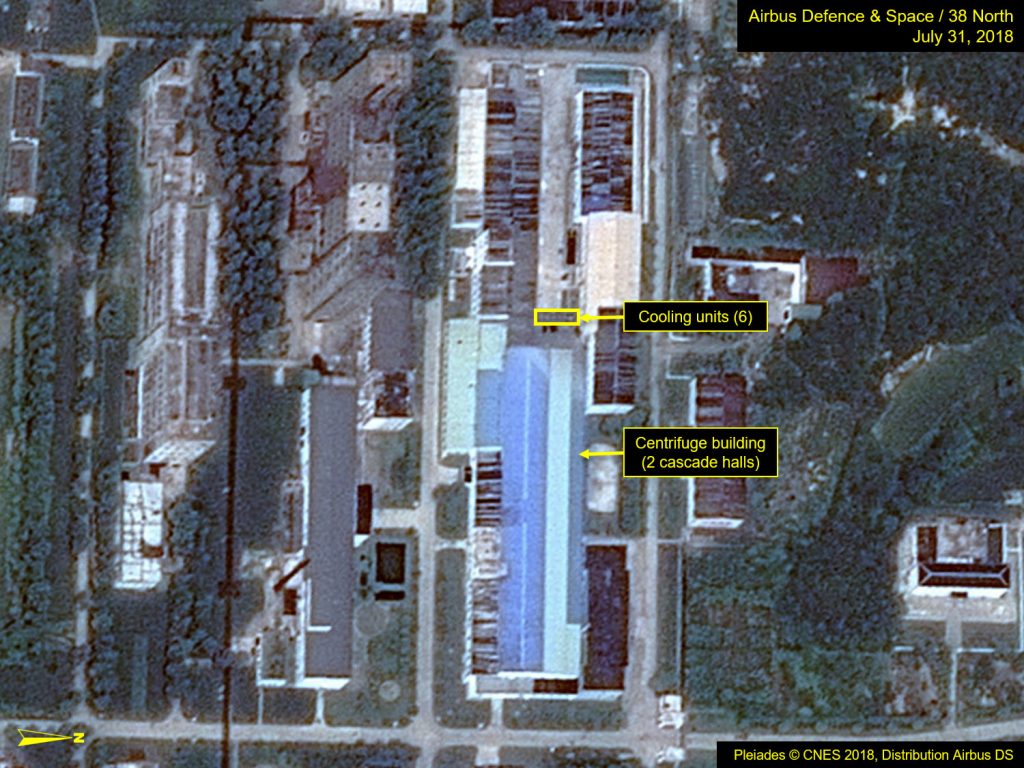 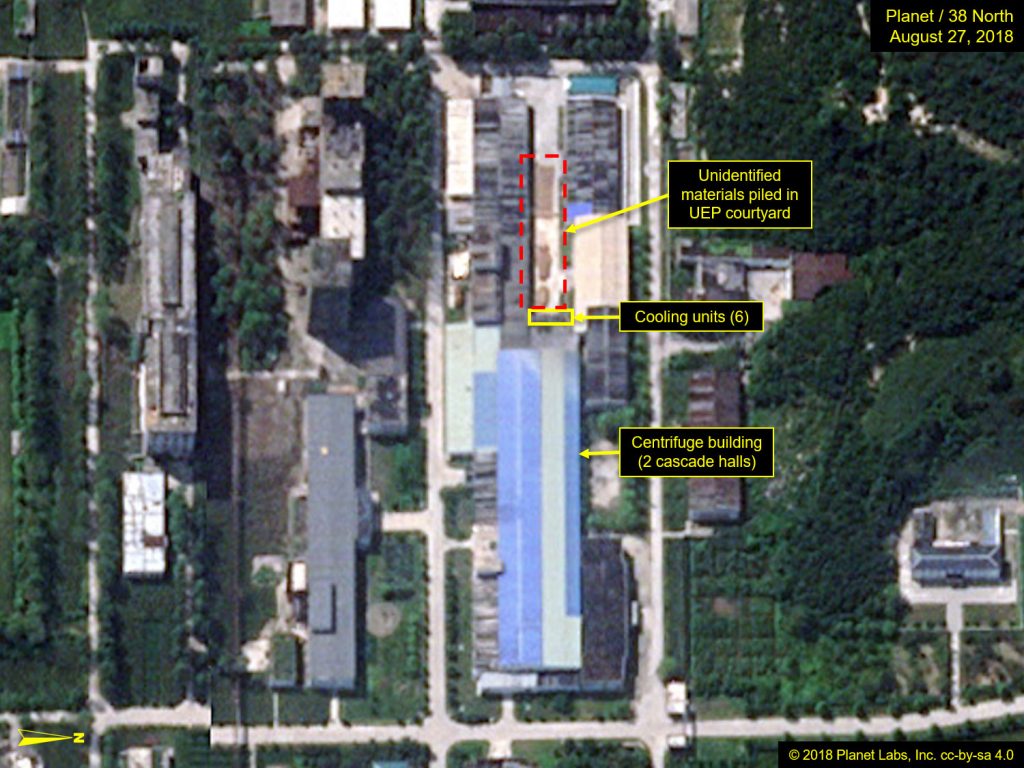