North Korea’s environmental problems have not garnered nearly as much attention as its nuclear and missile programs, signature construction projects or vague commitments to improving the economy, but it is an area that has seen the most interesting developments under Kim Jong Un’s tenure.[1] Deforestation is a massive problem in the country as the lack of trees contributes to flooding during the annual rainy season. Much more so than his predecessors, Kim has put a spotlight on the problem and more frankly described its systemic causes as he wrestles with a basic dilemma: deforestation occurred largely because of an economic crisis whose root causes remain unresolved. People cut down trees for fuel and firewood, and to clear land for farming. As long as the lack of food and fuel persists, Kim’s reforestation plans will be very difficult to implement.

A Focus on Forestry

On February 26, 2015, Kim gave a speech on forestry restoration to “senior officials of the party, the army and the state economic organs” in which he linked the failure of economic planning and environmental degradation together in an unusually stark manner:[2]

However, as people have felled trees at random since the days of the Arduous March on the plea of obtaining cereals and firewood and, worse still, as no proper measures have been taken to prevent forest fire, the precious forest resources of the country have decreased to a great extent. As the mountains are sparsely wooded, even a slightly heavy rain in the rainy season causes flooding and landslides and rivers dry up in the dry season; this greatly hinders conducting economic construction and improving people’s standard of living. Despite this, our officials have confined themselves to reconstructing roads or buildings damaged by flooding, failing to take measures for eliminating the cause of flood damage by planting a large number of trees on the mountains.

This may not seem all that radical, but it was, in fact, a crucial recognition of an endemic environmental problem in North Korea grounded in the economic collapse of the 1990s. Starting during the famine era, people all over the country would (and still do) fell trees, particularly on slopes and hills, both for fuel and for farming. This deforestation strips the land of tree roots to soak up excess rainwater on these higher grounds, which has led to soil erosion, flooding and massive material damage during the North’s annual monsoon season.[3]

More importantly, Kim acknowledged that forestry is not merely an environmental issue, but an economic one as well. In his speech, he identified the “Arduous March” as the underlying cause of North Korea’s deforestation problem.[4] Accordingly, Kim concluded that without systemic improvement of the economy, reforestation cannot happen. The discussion of North Korea’s forestry problems is an intriguing exception in Pyongyang’s politics and rhetoric. Systemic problems are seldom discussed openly, because doing so would mean admitting the fallibility of the country’s leadership or ideology. Kim’s initial focus and frank rhetoric on deforestation were promising, but thus far there’s little evidence that the ambitious plans have been translated into long-term, sustainable policy.

Not Just Words, But Actions

North Korea’s focus on forestry did not begin with Kim’s 2015 speech. The government laid out a long-term strategy on forestry development in 2013 that spans through 2042.[5] The campaign aims to restore the country’s woodlands in a sustainable way to match the conditions of its ecosystem. In the first ten-year phase, the goal is to restore the woodland ecosystems and decrease overall reliance on wood (presumably for fuel) by 20 percent (though it’s unclear how this will be measured).[6] Over the following 20 years, the plan seeks to diversify the country’s entire forestry resources. This plan contains ambitious, and relatively specific, quantitative targets for forestry cultivation, involving institutions at both the local and national levels. According to a 2018 brochure discussing the reforestation efforts, considerable resources have already been invested in this campaign. 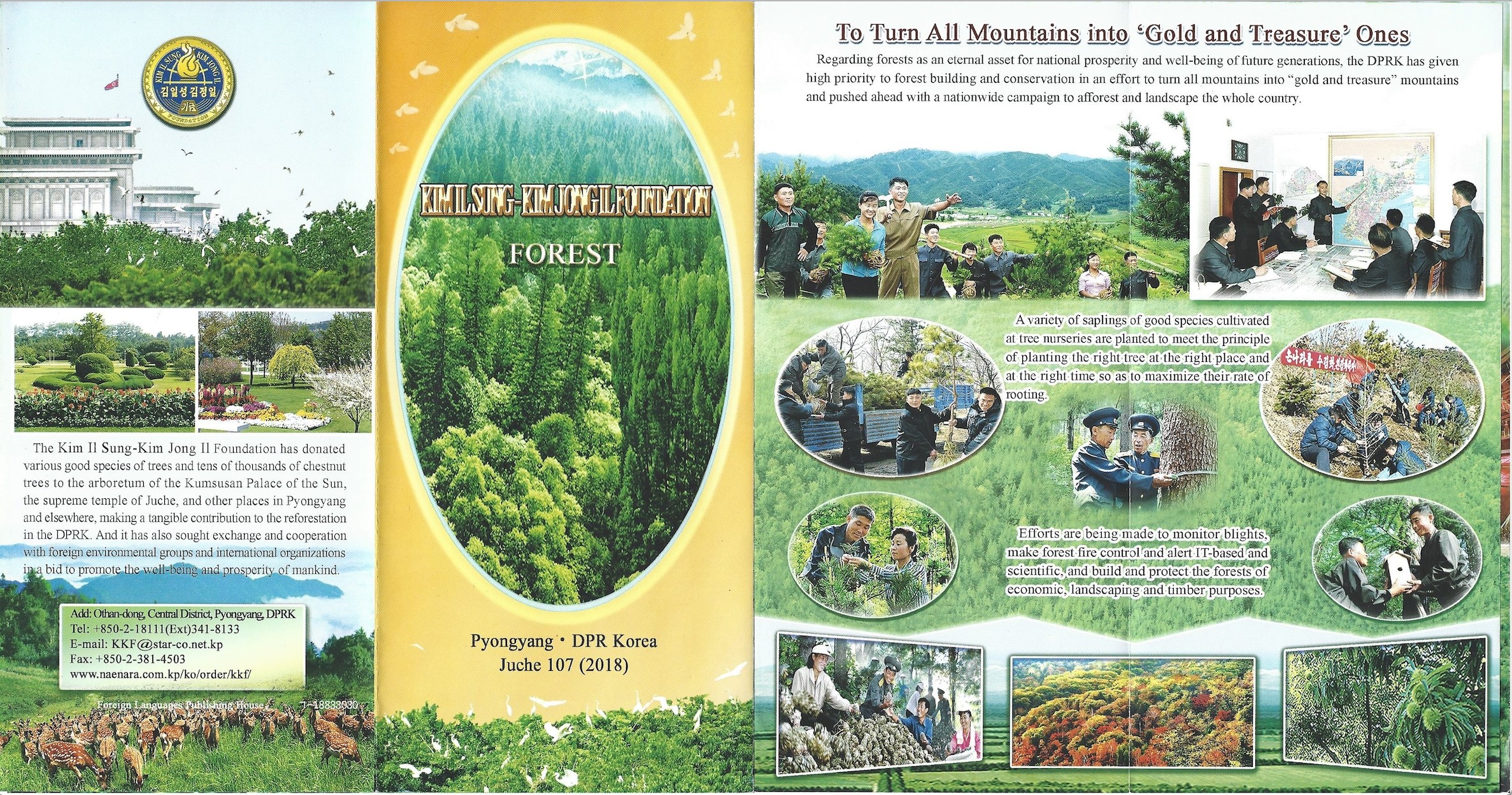 Reforestation under Kim Jong Un, as confirmed via commercial satellite imagery, has been a higher priority than before. For instance, Kim’s plan has led to the planting of nearly 400 tree nurseries and forest management stations. Under the current campaign, posters have appeared throughout the country warning that unauthorized tree felling is punishable by death, an indication of how seriously the state regards the problem. Kim has done on-the-spot forestry guidance visits several times during his tenure. For example, in July 2018, he visited the Kangwon Provincial Tree Nursery, stating that “abundant forest resources are priceless assets for economic construction.” A month ago, during a spot visit, Kim called for a tree nursery to be built in Kanggye, Jagang (Chagang) Province.

Ultimately, however, domestic policy implementation is almost always an uphill battle in North Korea regardless of the issue. In fact, there are indications that problems inherent in central planning—for instance, quotas leading to shoddy planting and trees ordered for planting in localities where the environmental conditions weren’t suitable—have hindered the execution of reforestation plans. Most importantly, as long as the food situation and agricultural system remain perilous, reforestation efforts won’t be sustainable. Despite harsher punishments for tree felling, the core problem—the lack of sustainable food and fuel—has not been addressed. Therefore, new trees may be planted one season, but people in need of firewood and plots for farming are still likely to cut the trees down in the winter. Decrees by Kim Jong Un may lead to temporary spurts of serious efforts, but the implementation is likely to fade over time until the standard of living actually increases from subsistence level.

Given this context, the World Food Program’s (WFP) recent assessment of North Korea’s food situation contained a number of worrying passages. WFP points out several times that the reforestation campaign is causing a gradual decline in food production from sloping lands.[7] Presumably, many of these areas are plots that private citizens have cleared for farming, and depend on for their livelihoods. Indeed, a large proportion of North Koreans depend on private farming for their sustenance, and without alternative sources of food, reclamation of these private plots for reforestation efforts will translate into people having less food to eat.

The government has proclaimed its intention to reclaim hillside slope plots around the country several times in the past, only to backtrack. However, under Kim Jong Un’s reforestation campaign, the government has followed through with reclaiming land used for private plot farming, a measure that has been met with local resistance. As Daily NK has reported continuously over the past few years, since no reasonable alternatives exist for fuel or farming, locals have been protesting the state’s reclamation of their private farming plots for reforestation efforts. As one of their sources put it in an interview in early May this year:

“There are still a lot of families in North Korea that light fires in furnaces. Essentially, the state should be conducting this ‘forest battle’ after the people stop using furnaces and can heat their homes with coal or gas,” another source in Jagang Province reported. “There are sometimes people who freeze to death because they don’t have any wood to burn, so it’s difficult to fathom how this battle will be successful.”

Perhaps because environmental problems are so visible and tangible, these issues have become less ideologically sensitive than other economic issues. Kim Jong Un hasn’t declared central planning dead, but he has clearly recognized that the country’s economic problems are the root cause of the endemic and disastrous effects of deforestation. The North Korean leader’s ambitious reforestation campaign is still in place, but the focus on forestry appears to have waned over the past year.[8] Even if implementation were to continue, success will always be limited until the need for fuel and farmland is met through other methods than tree felling. Reforestation is desperately needed, and the strong emphasis from Kim on this issue over the first few years was promising. But until basic changes in economic and agricultural management occur, it will be difficult to make long-term progress in deforestation.