Although recent media reporting describing evidence of recurring leakage from the Pyongsan Uranium Mill’s waste tailings pipeline is accurate, the headlines associated with that reporting have been overly sensationalistic. The observed leakage is less extensive than those headlines suggest. Perhaps even more important than the environmental impact, operation of the facility is another indication that Pyongyang is continuing and prioritizing its program to produce highly enriched uranium for nuclear weapons.

The Pyongsan Mine and Concentration Plant is North Korea’s largest known operating uranium mine and concentration plant.[1] Pyongyang has continued to maintain and operate the facility without hiatus up through late May 2018 in support of its ongoing nuclear program. Recent commercial satellite imagery from March 23, 2019, shows that plant operations have continued over the past year as indicated by additional accumulation of waste within the waste tailings pond (Figure 1) that is located adjacent to the Ryesong River.[2] The waste tailings are nearly black in color, consistent with all available reporting that the uranium ore is highly carboniferous (e.g., uranium bearing anthracite coal).

Media reporting describes the recent independent findings of US researcher, Jacob Bogle, who, in reviewing commercial satellite imagery of the Pyongsan plant as far back as 2003, correctly noted that “Some of the images also show fluids being actively spilled directly into the [Ryesong] river.” On his own website, Bogle notes that such water pollution could potentially impact the people who live “near the factory and downstream along the Ryesong River.”

The decision to transport the liquid waste tailings from the Pyongsan Concentration Plant via pipeline over the Ryesong River tributary was clearly one that put convenience as the first priority and not safe environmental practices. The potential health hazards from waste tailings leakage into air, surface water and groundwater are well known. (See, for example, https://wise-uranium.org/uwai.html.) The primary reason that uranium ore processing waste tailings are impounded behind dams and dikes is because they are heavily laden with heavy metals and acids, and hence, highly toxic (no flora or fauna is able to survive in them). There are also radiation health hazards as shown in the graphic below.

While, so far, there is no evidence of any waste tailing pond dam failure at Pyongsan, the spillage at both ends of the pipeline that transports the waste to the tailings pond over the river is clearly evident on multiple images, as Bogle reported.

Commercial satellite imagery of the Pyongsan facility dating back to 2003 shows the presence of a concrete reservoir retention dam downstream of the tailings pipeline, which could potentially serve as a partial containment trap mechanism for heavy metals from tailings spillage (Figure 2). In addition, between October 2016 and May 2017, a new, small, blue-roofed structure was constructed along the tailings pipeline near the tailings pond. Its purpose, while unclear, might be to neutralize the acids common to uranium waste tailings through the use of lime, a white material. Of note, a whitish layering on the waste pond became prominent once the blue-roofed building was built (Figure 3).

Regardless of whether these structural features represent pollution mitigation efforts or not, the fact is that there continues to be observable evidence of recurring spillage of waste tailings from the waste pipeline. The North Koreans have allowed that spillage to continue without any obvious repairs and/or replacement of the waste pipeline. We must, therefore, conclude that the amount of waste being inadvertently spilled is within what the North Koreans deem “tolerable limits” when compared to the enormous volumes of waste going into the waste pond, indicative of continuous plant operations. If the earthen retention dam holding back that waste pond were ever to fail, then there would be an environmental disaster of catastrophic proportions, in comparison to the leakage amounts observed so far.

The recurring waste tailings leakage from the Pyongsan Uranium Concentration Plant, as first noted by Jacob Bogle, has continued, and possibly worsened, over the past two years, but its true extent remains unknown. While pollution of the river from the waste is a local toxic health hazard, it most certainly did not turn the entire river black as suggested in some of the media headlines. It also remains unknown how much dilution occurs downstream and how the water is being treated for both potable and agricultural use. The extent of human health effects could likely be determined by South Korea, if it were to conduct environmental sampling on its side of the Han River estuary that the Ryesong River empties into on its way to the Yellow Sea (West Sea).

Figure 1. Overview of the Pyongsan uranium mines and collocated concentration plant, as well as the growing accumulation of waste in the tailings pond, providing clear evidence of continued operations at the plant. 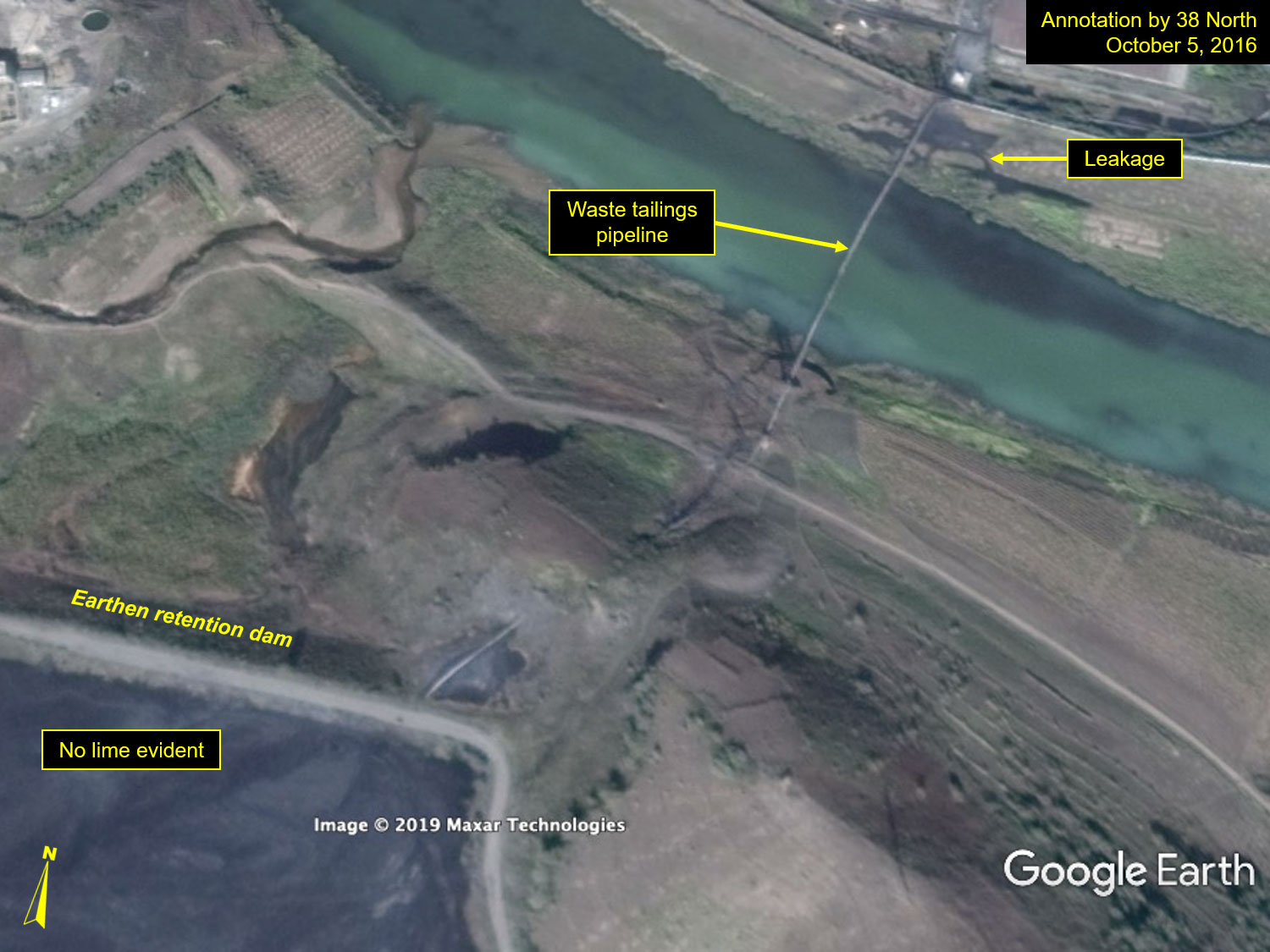 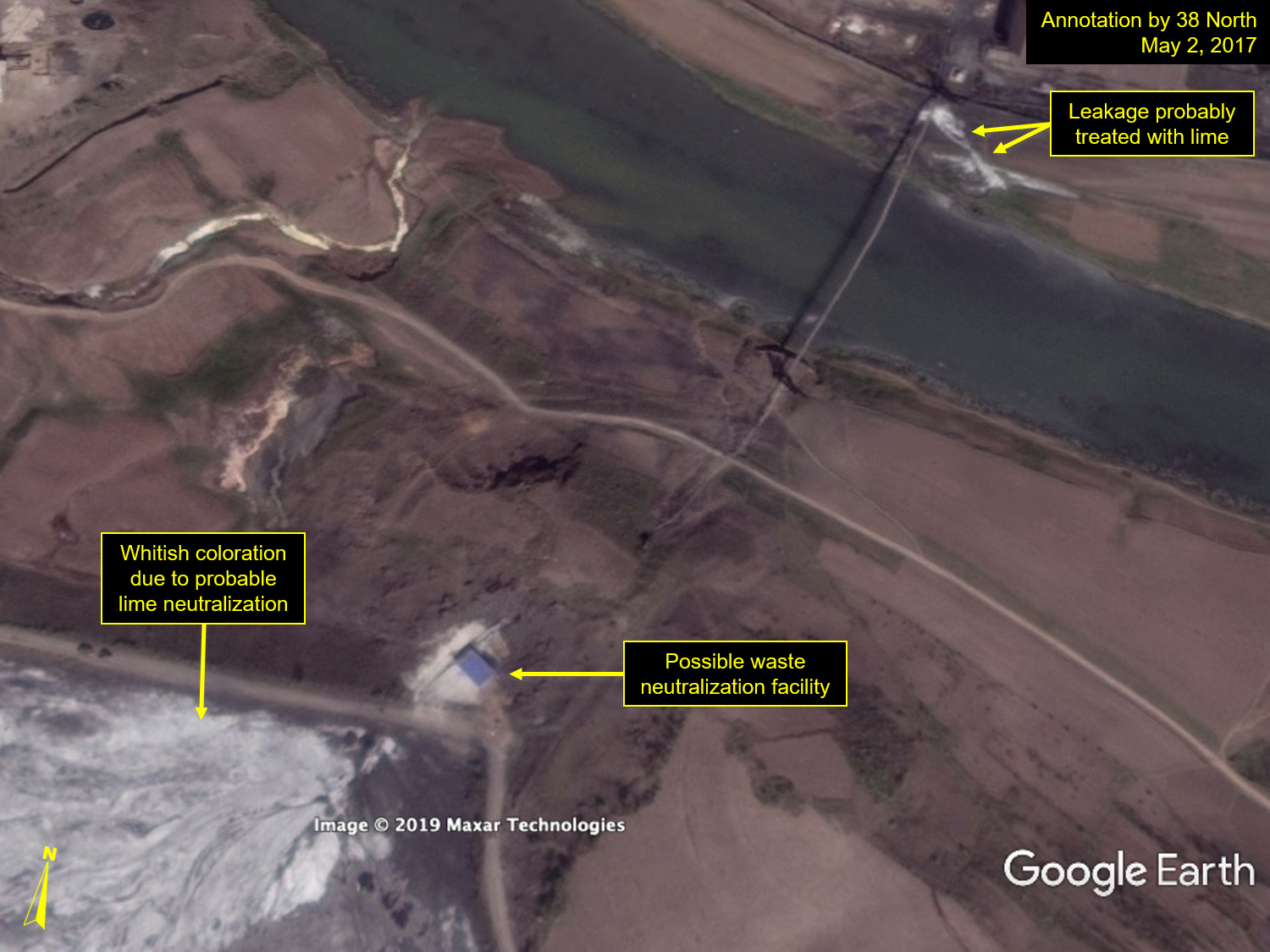 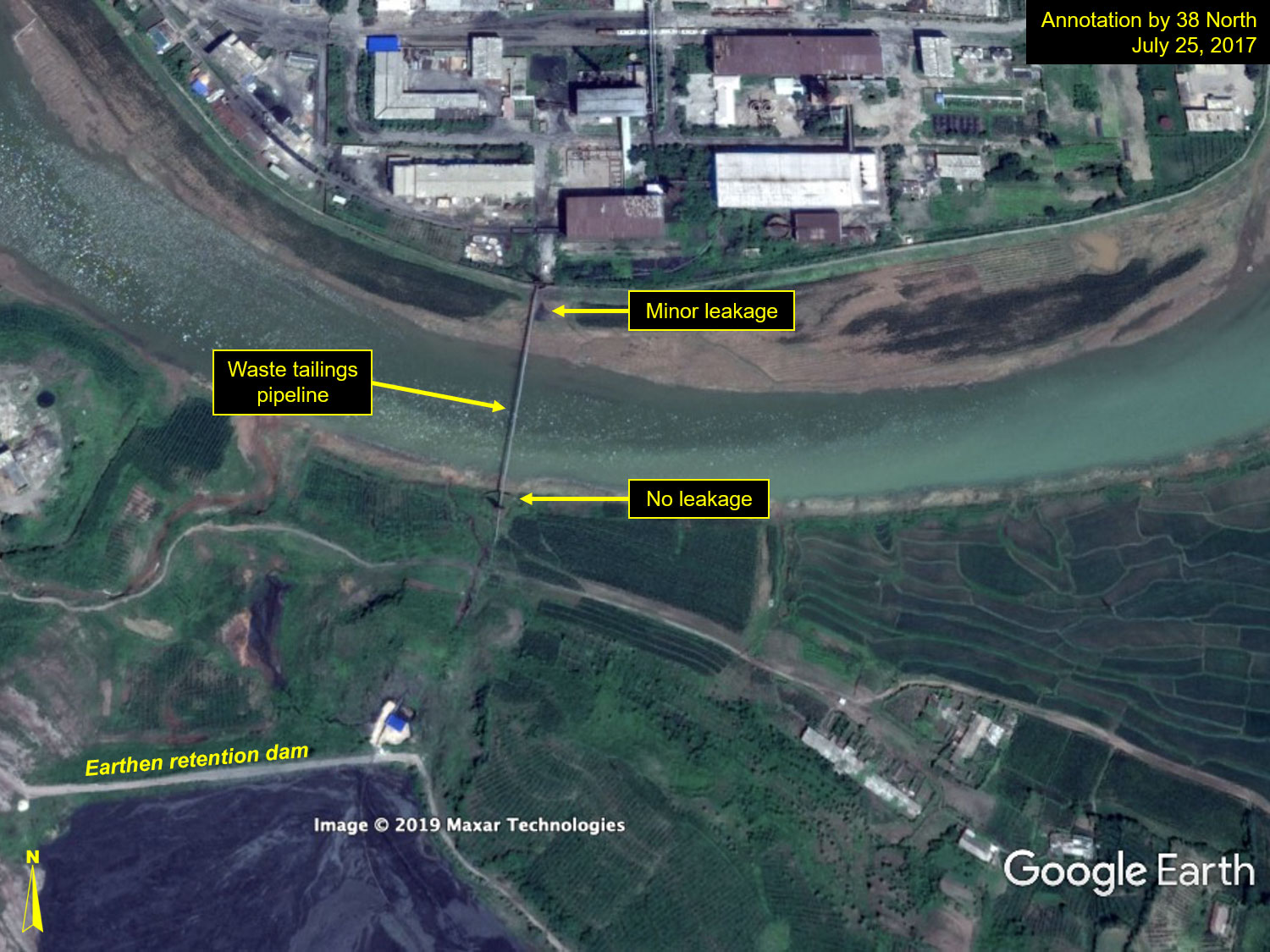 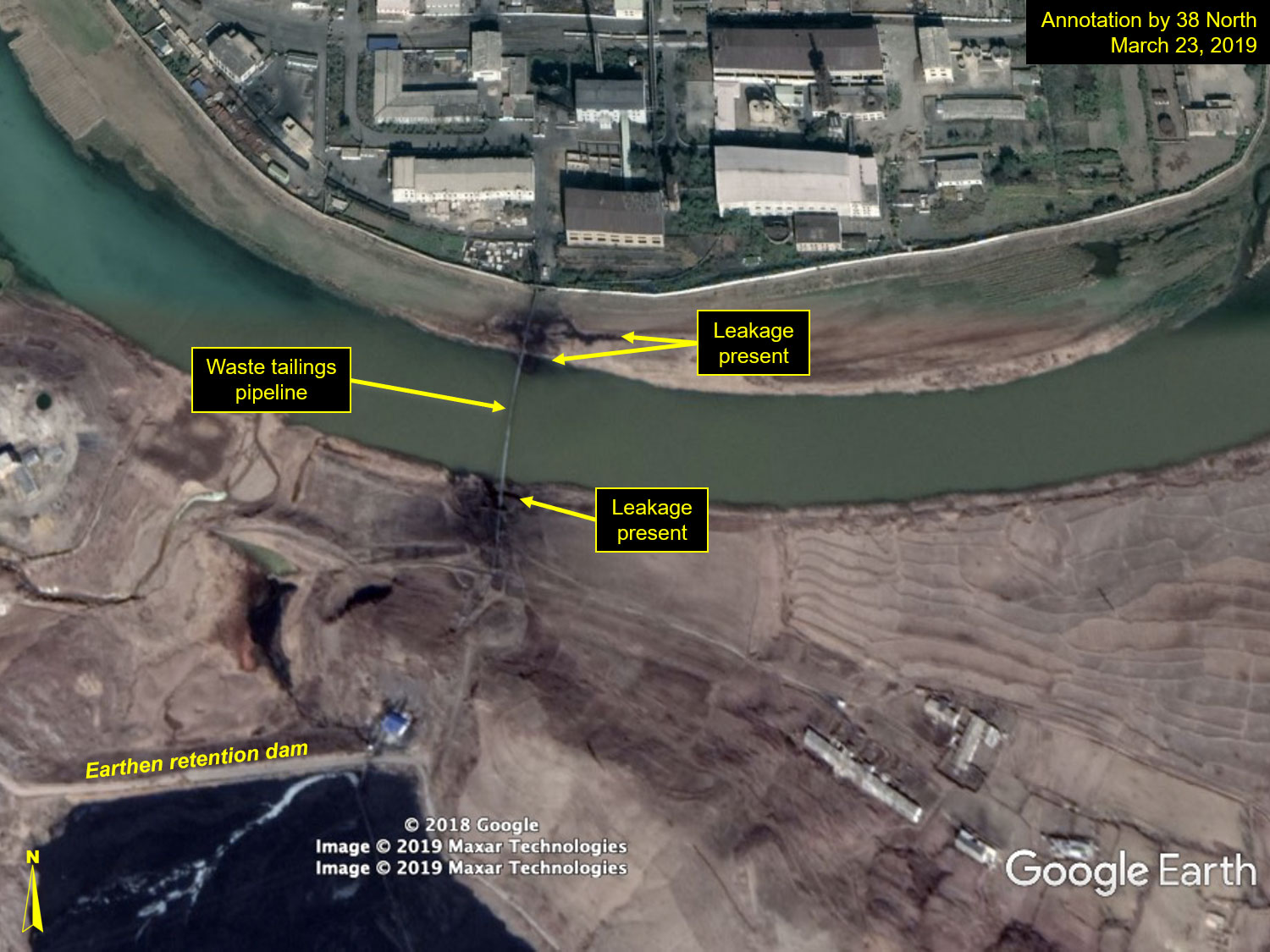