Commercial satellite imagery of the Yongbyon Nuclear Scientific Research Center from the month of September reveals there are numerous white, cylindrical-like containers in the Fuel Reception Area of the Radiochemical Laboratory. The purpose of these objects is unclear.

While there are no indications of renewed reactor operations, some minor work in being done to extend the earthen embankment that spans the two pump houses, probably to help mitigate erosion from seasonal flooding. Minor construction projects are underway throughout the rest of the complex, including at the Main Research and Administrative Headquarters Area and the engineering office building adjacent to the Experimental Light Water Reactor (ELWR).

Imagery indicates that numerous small, white cylindrical-shaped containers or “packages” are present in the Fuel Reception Area. A large grouping is concentrated in an area near the building itself and several are lined up along the service road to the facility. Commercial satellite imagery alone does not provide sufficient information to determine the purpose of these objects.

Light vehicle activity was observed at the 5 MWe Reactor on September 16 and 29. On September 16, a large cargo truck and a possible light utility vehicle were present. On September 29, a small cargo truck and the possible light utility vehicle were present. The presence of vehicles is not unusual, but suggests the facilities are being maintained. In August, for instance, the number of vehicles in this area ranged from none to a high of four vehicles present.

No activity was observed at the Experimental Light Water Reactor. However, minor construction continues at the engineering office building located immediately west of ELWR. Unidentified objects have been observed on the concrete parking area of the building, including two large, tarp-covered objects observed on August 4, and approximately a half dozen uncovered, smaller ones neatly stacked in two lines in the front parking area. The latter were first observed on August 25 and have remained present through September 29. Minor construction activity appears to be continuing at the rear and south sides of the building. The three identified objects and probable mobile crane observed along the road on the east side of the ELWR on August 13 were not present on subsequent coverage.

Renovation is ongoing in the Main Research and Administrative Headquarters Area. In the northwest corner of the compound, a two-story building, present on August 13, was razed by August 25. On September 16, a new building was under construction on the same site. Its foundation appeared complete and walls were being erected. By September 29, the first-floor slab flooring was partially in place. While the final size and purpose of the new structure is yet to be determined, the pace of construction has been remarkable.

At the east side of that complex, along the river’s edge, dredging and earthmoving have been ongoing, but the nature of the work had been undetermined. Imagery from September 16, however, revealed that an earthwork dike is being constructed in the area between the northern-most pump house and extends north to the bridge. This will be an extension to the existing embankment, which spans the distance south between the two pump houses associated with the complex. When complete, it will likely serve as flood protection against seasonal, rising river waters. Imagery from September 29 showed that a boom crane had arrived and had been located directly above the dredge suggesting, that work was being done to the dredge at that time. 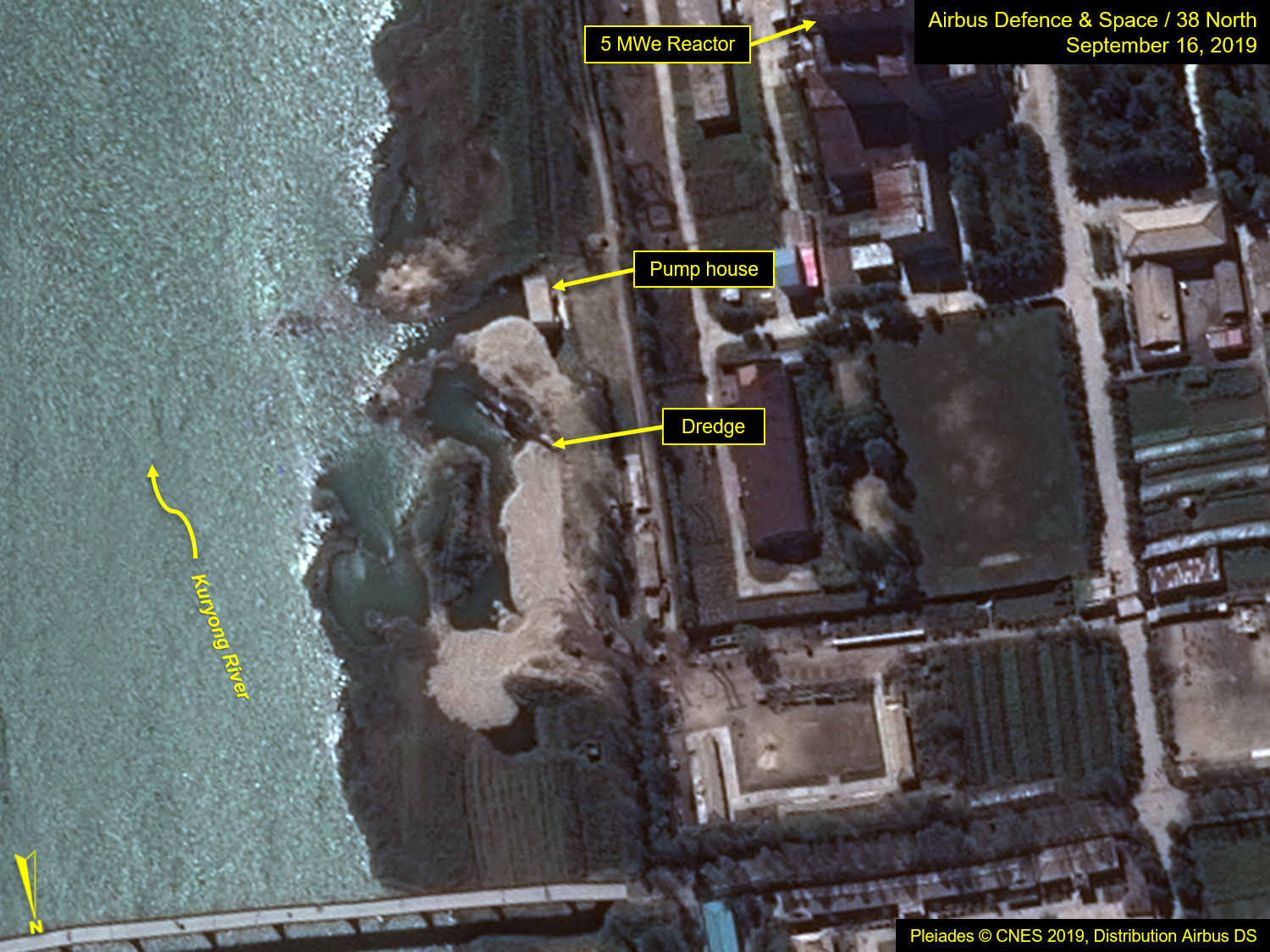 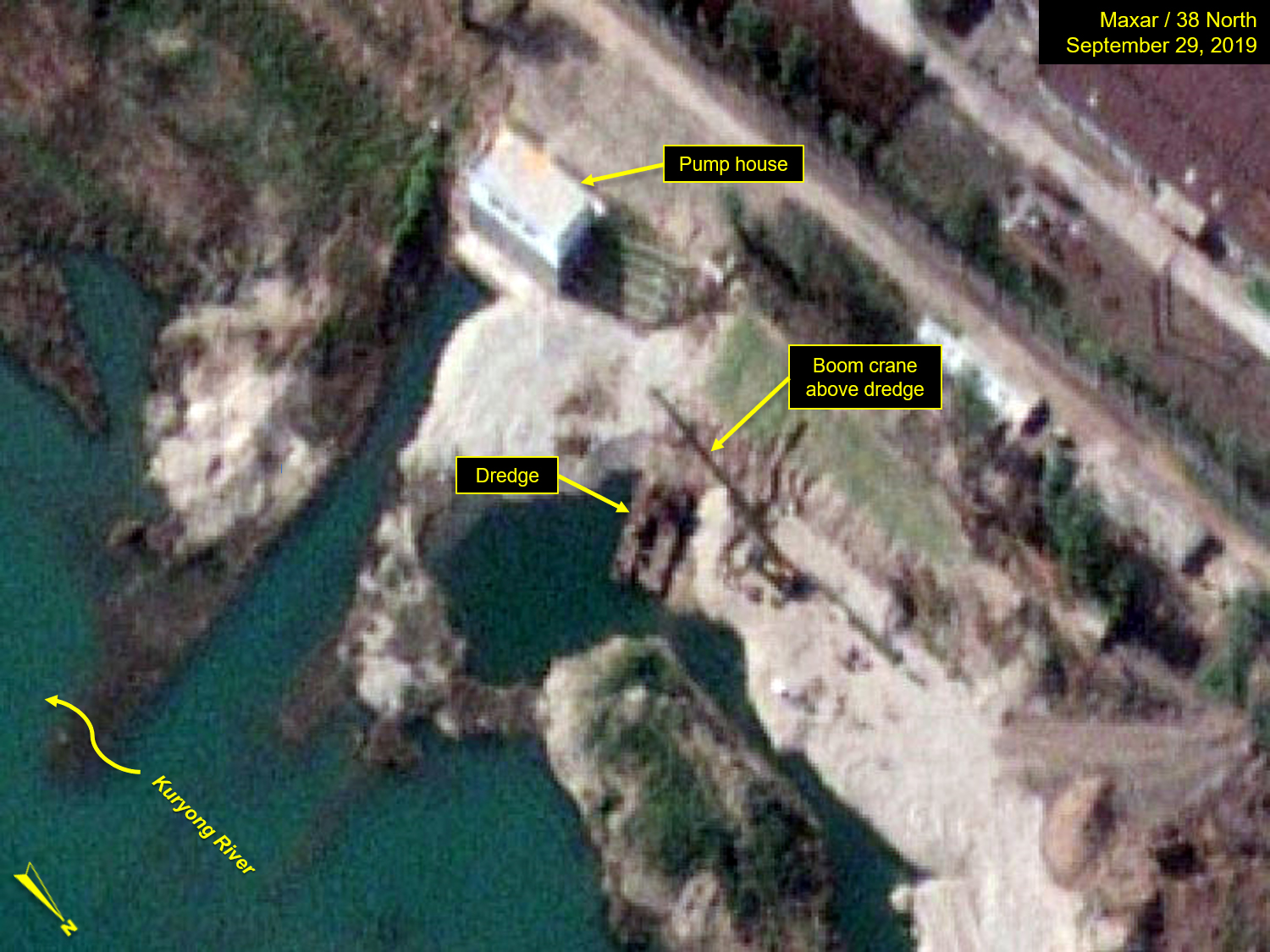 No significant activity was noted at the Uranium Enrichment Plant, the thermal plant, or the Radioisotope Production Plant.