A Team of Their Own: How an International Sisterhood Made Olympic History
By Seth Berkman. Hanover Square Press, October 2019. 384 pp. 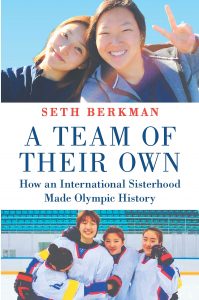 Seth Berkman’s A Team of Their Own: How an International Sisterhood Made Olympic History is the backstory of how a Korean women’s ice hockey team ended up on the front pages of the world’s newspapers rather than buried deep in the sports pages. Berkman started following the South Korean national team in their training camp in Duluth, Minnesota in January 2017, as they prepared for their Olympic debut and he followed them through to the end. Initially, his interest was sparked by how South Korea’s struggling indigenous team had been transformed by half a dozen “made in America” imports and how home and away had successfully integrated. Unknown to Berkman, there was yet another turn of the screw to come.

The united women’s hockey team skating on the Olympic rinks was a Frankenstein’s monster stitched together from various body parts. The team was an afterthought. Women and women’s sports take a backseat in Korean society. Even during Park Geun-hye’s presidency, only 3 percent of government officials were women. The women’s ice hockey team made its debut in the 1999 Winter Asian Games after the sport was added to the Olympic roster. The initial team was assembled, out of desperation, from a group of failed figure and speed skaters—not surprisingly, it was awful, losing to Japan 29-0 in 2007. Things didn’t get any better. By early 2011, they were finishing last in the Asian Winter Games, bringing their all-time record to losing all 15 matches and outscored 242-4. They even lost 6-1 to North Korea.

Everything changed on July 6, 2011, when South Korea was awarded the 2018 Winter Olympics. Under the rules, the sports teams of the host country are given an automatic spot. Nevertheless, the International Olympic Committee (IOC) and the International Ice Hockey Federation (IIHF), wary of the tournament being made a laughing stock, gave the Korean Ice Hockey Association (KIHA) an ultimatum: they would only get to field a team if the women were in the top 18 of the world rankings. At that point, they were languishing in a dismal 26th place.

The team needed to deepen the player pool, but this was not going to happen at home. There was no hockey tradition—especially for women—and consequently virtually no registered players; as late as 2017, the grand total was 319. As Berkman explains, the answer lay in finding innovative ways to recruit more “Koreans.” According to South Korea’s Ministry of Foreign Affairs, there are just shy of seven and a half million overseas Koreans with 2.5 million in the United States. Concurrently, there were also the “adoptees,”—110,000 children that Seoul allowed to be adopted by American families between 1953-2008. Berkman himself was one of them, born in Seoul and raised in the US by an American family. A disproportionate number of both the Korean diaspora and adoptees had ended up in Minnesota, known as “ice hockey country,” thanks to the state’s progressive social welfare programs.

In 2013, a “spare” member of the wealthy Hyundai family parachuted in as the KIHA president. The organization was soon off on a series of fishing expeditions to catch second or third generation Korean-born hockey players with the skating skills and training that made the US and Canada the two powerhouses of ice hockey. The KIHA sent emails to anyone on the rosters of North American college hockey teams with Korean names or physiognomy. Initially, they kept catching Chinese who were promptly thrown back. Then they got lucky and found a player in Toronto who knew another in Manhattan. Both were air-lifted to Seoul. Fresh “imports” were to follow.

Not everyone was thrilled with this mercenary approach and South Korea’s women skaters were less than impressed. These “imports” would be displacing from the squad marginal players who had given years of their lives for hockey. Berkman empathized. Like himself, these “convenience Koreans” identified as Americans. The Korean “old guard” had sacrificed everything; one, for example, had given up a career as a concert pianist. Worse, the American “imports” brought in their wake an American coach, Sarah Murray, who at 26 was younger than some of the team members. Coach and collaborators worked at the expense of the “old guard.” Berkman followed their progress as a sports journalist for the New York Times just as results were beginning to show. By 2016, this new hybrid team had beaten the North Koreans 4-1 in Slovenia, and the following year in Sapporo they scored another moral “victory” by losing to Japan 3-0. Just a year before the Olympics, South Korea won a world championship in the Division II Group. No longer a danger of embarrassing themselves and the nation, they were on their way to PyeongChang.

It was then that Kim Jong Un intervened and knocked the future out of kilter. 2017 had seen the North test a bigger and better nuclear device and twice “prove” the range of their intercontinental ballistic missiles (ICBMs). Pyongyang’s technology was in the zone where they were clearly capable of crashing a rocket on the mainland US, conceivably carrying a nuclear warhead. Washington and US President Donald Trump were closing in on “kinetic” solutions. Kim’s New Year’s Address pressed the pause button. He announced the North now had its nuclear deterrent and, therefore, no longer needed to conduct further nuclear and ICBM tests. In the meantime, he wished the South’s Winter Olympics—on the verge of being canceled—well and offered some late role in the events for the North.

While senior North Korean officials would watch from the VIP seats and their “cheerleading army” would sing “Korea” to victory from the stands, what about on the ice? There was precedence. The two Koreas had fielded a joint table tennis team in the 1991 World Championships in Japan and, the same year, a joint soccer team played in the FIFA World Youth Championship in Portugal. Subsequently, the best the peninsula had mustered were separate teams marching under a single flag. In the immediate wake of Moon Jae-in’s victory in the special presidential election—as Park Geun-hye swapped the presidential palace for prison—the idea of a unified hockey team had been floated by the South’s new minister of education. It seemed a mere figment of his imagination rooted in Korean cultural mores. In this view, women were different—a polite encoding for “inferior”—and their principal role was to service men at home, in the office and now on the sports field. There was no reason to ask the women what they wished. They could only want to sacrifice themselves to pleasure the men.

On January 20, it was a done deal. Twelve North Koreans were to be added to the roster with a minimum of three playing on each match squad, all signed-off and given absolution by an IOC whose political antenna swamped their sporting ones. The sports minister claimed it would help the team, but to do what was never explained. The president’s office suggested, since no one would normally pay them any attention, that they should be grateful for being selected as religious offerings for men’s politics. South Korea’s prime minister added, “Speaking honestly, the women’s ice hockey team is not going to win a medal during the Olympics, is it?” It was a self-fulfilling prophecy.

The political argument was made that this would all advance eventual unification. Yet in the South support for unification is dying among the younger generations. Millennials have less enthusiasm for a united Korea than turkeys have for Christmas. Despite a petition with 50,000 signatures and opinion polls overwhelmingly backing the team as it stood, politics trumped sport.

The new unified hockey team became another victim of Korea’s febrile fashion merry-go-round. Immediately, everyone wanted to meet, greet and fete them. Pyongyang sent their designated tranche of players, a sad mismatch for those requested on sporting grounds. Berkman, who came back “home” for the first time for the tournament, details how—with difficulties—the hybrid squad was broken down again and reassembled embracing the North Koreans. If it worked in the locker room, it didn’t on the ice. The prime minister was proved retrospectively right. They didn’t win a medal. The politicians had made sure of that. The team lost every match and finished last. The highlight was—finally—a goal scored against Japan. They had their fifteen minutes of fame. Tearing the women apart proved harder than putting them back together. Following the Olympics, the team returned to its 2016 form: their next outing in Italy saw them place second in their division of the World Championships, playing to empty seats in small stadiums rather than in front of the global media.

Was it worth it? The question is for whom? With the current state of North-South relations even after the election, it’s hard to make the case for any lasting political benefit. From a sports perspective, Berkman tells a good story he happened on more by accident than design. He makes no attempt to explain ice hockey as a game, with nothing about rules or tactics. A short glossary, at least explaining the terms he uses, might have helped drag the book more into the mainstream rather than leave it largely marooned amongst ice hockey aficionados.

It’s equally unclear why he failed to include in a 350-page book the usual paraphernalia of sporting events—who played, who scored and the final league table. As frustrating is his erratic assessment of the team as they careened from losers to winners and back again: the “import’s” team were the “biggest underdogs in Olympic history,” to “any chance the team had of winning was lost once the North Koreans came on board,” and then “If Soojin’s shot was just one inch lower to the right, the Unified team’s Olympic experience could have changed dramatically.” A tighter edit would have made for a better match. Nevertheless, A Team of Their Own tells a tale worth telling of serial sacrifices made by and imposed upon a team of women hockey players and expat “imports” who played—or most poignantly didn’t play— the game of their lives under rules dictated by politicians in Seoul and Lausanne.