Recent commercial satellite imagery indicates construction progress on the highly touted Tanchon Hydroelectric Power Station Project is lagging. Despite the emphasis on this project in 2017—both in Kim Jong Un’s New Year’s address and in a May Pyongyang Times article—the rapid pace of construction observed from 2017 through September 2019 was not matched from then through 2020. Of the three key projects located in the vicinity of Tanchon, only Power Station No. 5 has shown signs that it is nearing completion. Progress on Power Station No. 6 and the Sinhong Dam continued, but at a much-reduced pace.

While this year’s heavy rains and typhoons clearly impacted the area and will likely result in additional delays, the lack of significant advances in construction to both Power Station No. 6 and the Sinhong Dam, and Tanchon Power Station No. 1, suggest other factors were at play prior to the storms. Whether competing national projects took workers and construction materials, such as concrete, away from this project is unknown, but the slow pace of construction in recent months does raise speculation.

The hydroelectric Tanchon Power Station—first mentioned in Kim Jong Un’s New Year’s address in 2016 and subsequently in 2017—is a complex project involving the construction of several main dams and power plants that draw upon the Jangjin, Namdaechon and Karim Rivers, as well as a series of waterway tunnels which cover hundreds of kilometers and provide distant water sources to regional hydroelectric stations. This collection of power stations is expected to generate several hundred thousand kilowatts of power, the largest such project North Korea has undertaken.

A description of the Tanchon Hydroelectric Power Station Project was featured in an article published in the Pyongyang Times, detailed by Hong Jong Min, a member of the construction panel at the field headquarters. In the article, the naming convention of the series of power stations erroneously assigned the power station integrated into Sinhong Dam as being Power Station No. 5. However, Station No. 5 is now correctly identified as the smaller of the two water tunnel-fed power stations, located further downstream from the dam, Power Station No.1 being the other. A recent Korean Central Television (KCTV) photo shown on July 18, 2020 captured the station’s name prominently displayed on the front of the generator hall.

While imagery from March 13 and October 26, 2020 revealed signs that the project’s pace has slowed since last year, the floods and typhoons this summer certainly did not help. To what extent the weather affected progress is unclear as other issues had plagued the project prior to the storms, such as competing high-profile projects, the COVID-19 pandemic and nationwide shortages of construction supplies such as concrete.

At Power Station No. 6, the floods should have provided a good opportunity to begin capturing water to fill the reservoir that will power the station. However, the Sinhong Dam was apparently not ready to do so, suggesting that the power plant itself is still far from completion. This is unlike the Orangchon Hydroelectric Project, where its large dam began holding back water long before the integrated power station was finished.

Unlike Power Station No. 6, the design of Power Stations No. 1 and No. 5 are such that they will be powered by water fed from distant reservoirs via water tunnels, so the flooding in this region likely had less of an impact on their construction. It is unknown whether the powering water for both Stations No. 1 and No. 5 comes from the same source, but the fact that more progress has been made on Station No. 5 suggests their sources are different.

Construction on the Sinhong Dam has progressed since September 2019, but when compared to the progress made between 2018 and 2019, the slow progress in reaching its final dam wall height suggests other factors are in play. The top of the dam remains incomplete across its top, perhaps due to interior work or work on Power Station No. 5, or even due to shortages of building material given the multiple large-scale construction efforts underway around the country. 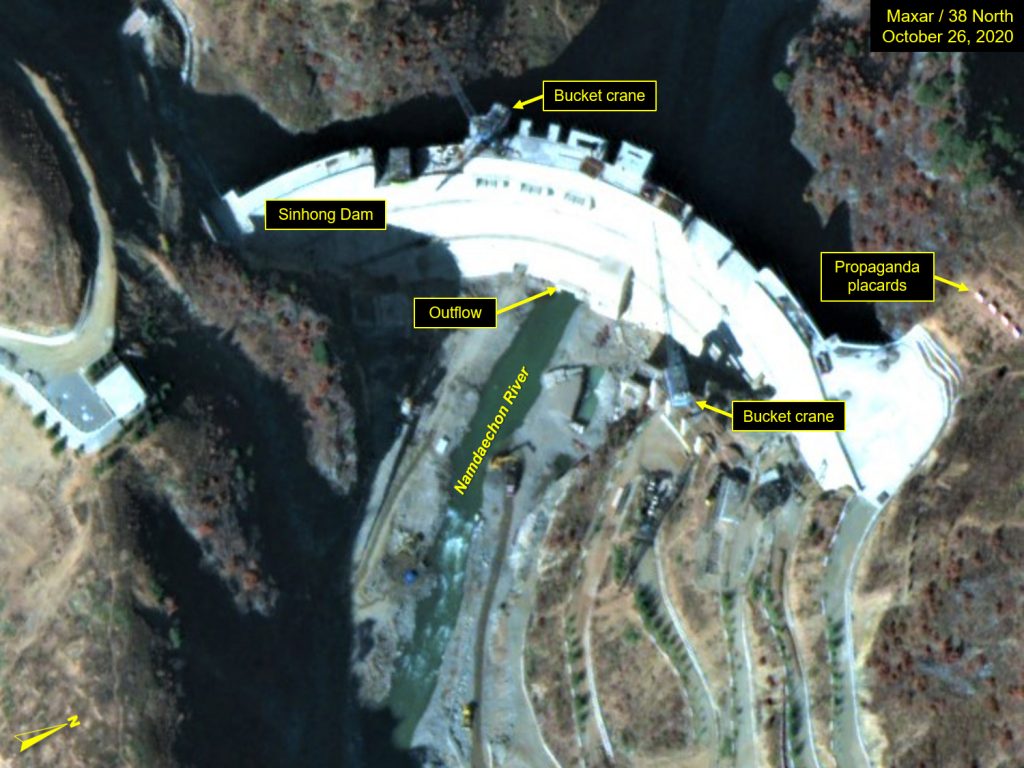 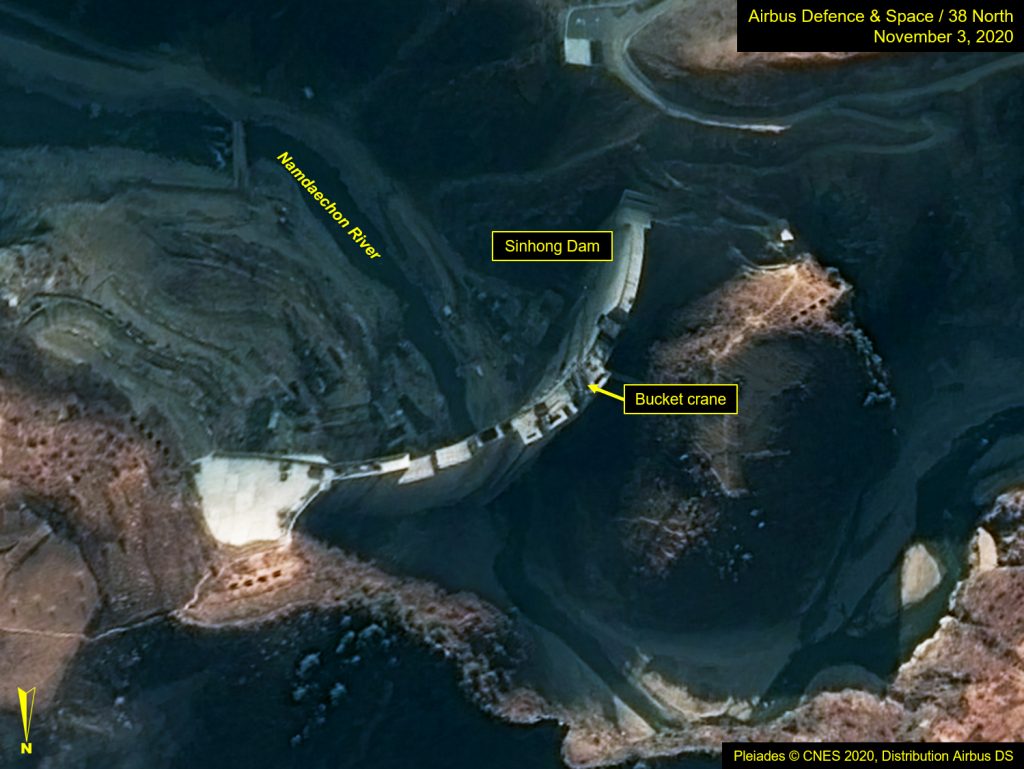 Commercial satellite imagery of October 26 showed that little progress had been made at Power Station No.1 over the past year. The surge tank located on the mountain behind the facility remains uncovered, and the penstocks necessary to bring water down to the generator hall have yet to be installed. The generator hall remains relatively unchanged since September, and still lacks a roof. The surrounding area was being prepared for the installation of a substation and transformer yard, but none of that has advanced. In fact, the heavy rains have washed soil onto the site, eroding some of the completed work and creating sinkholes at the location where the substation is likely to be placed. No damage to the existing structures, however, is evident.

Figure 5. Little progress made at Tanchon Power Station No. 1. 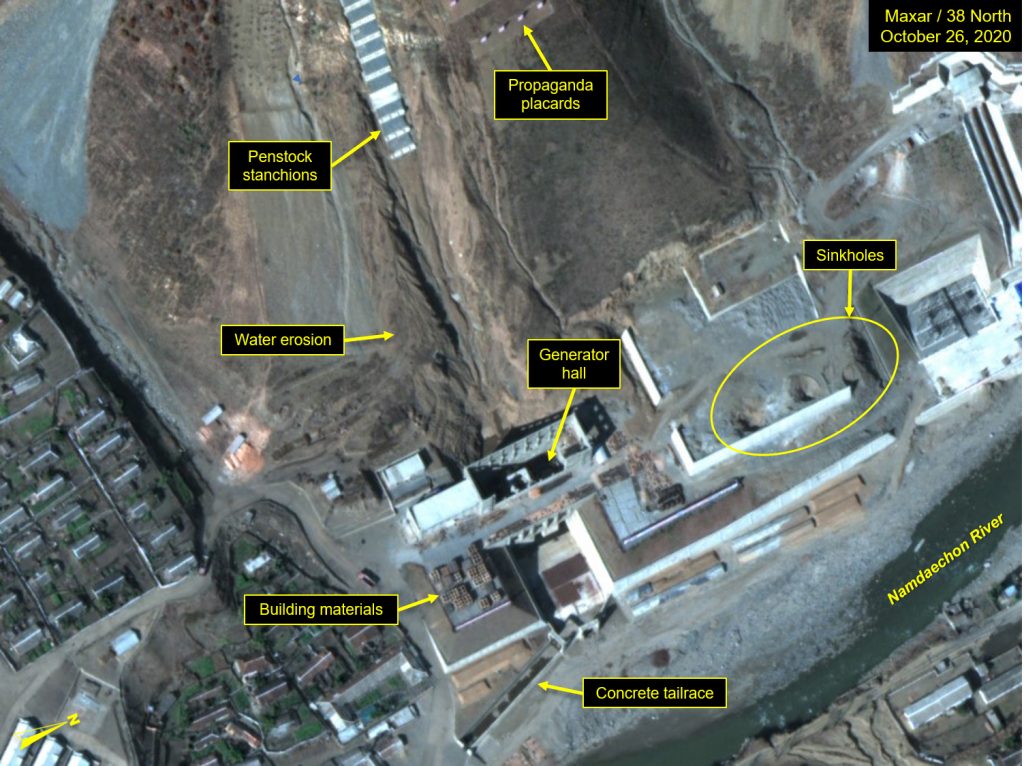 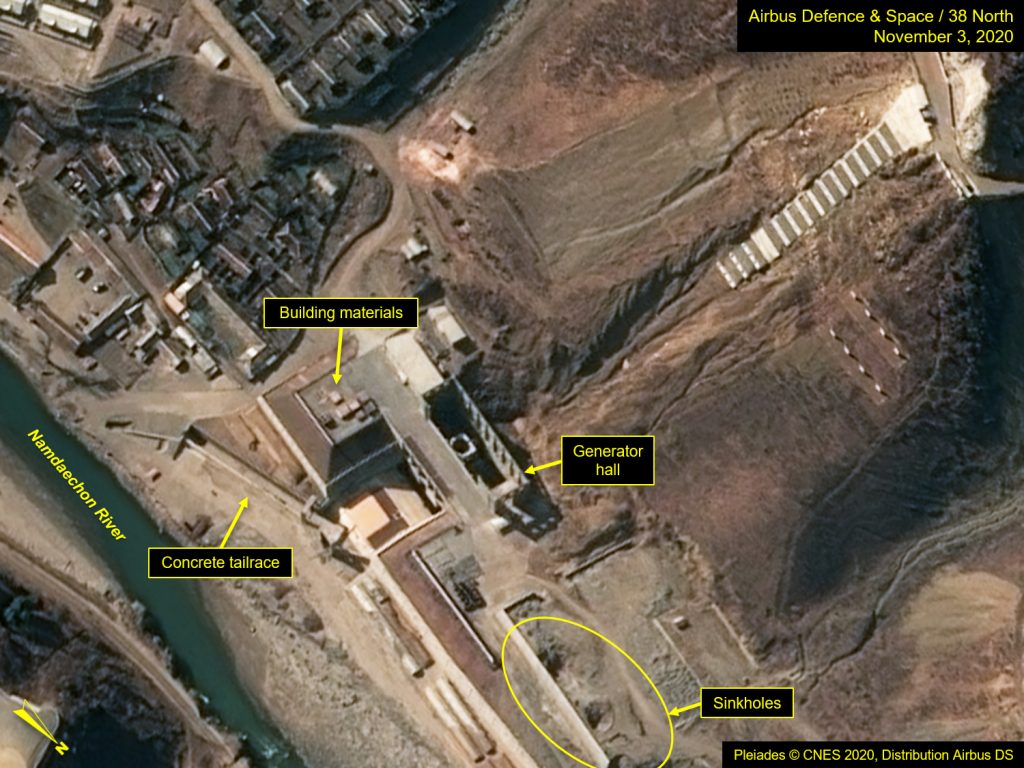 Progress on Power Station No. 5 has been the most evident. The supporting hillside surge tank has been covered, twin penstocks have been installed leading from the tank to the generator hall, the generator hall’s roof is now in place, and the transformer yard/substation—located adjacent to the hall—appears complete, although neither power lines nor the poles to support them are discernible. But overall, the site seems neat and cared for.

TV coverage showed workers putting some final touches on the hall’s interior. But despite the appearance of completion, no water is being discharged from the hall into the river, indicating the plant is not in operation.

Flood damage related to the Tanchon Hydroelectric Power Project appears to be confined to two areas where riverbed tunneling was in progress. The area just below the dam seems to be less affected, although the spoil piles associated with three tunnel entrances have been deeply eroded. Whether water entered these tunnels and caused interior damage is not known. 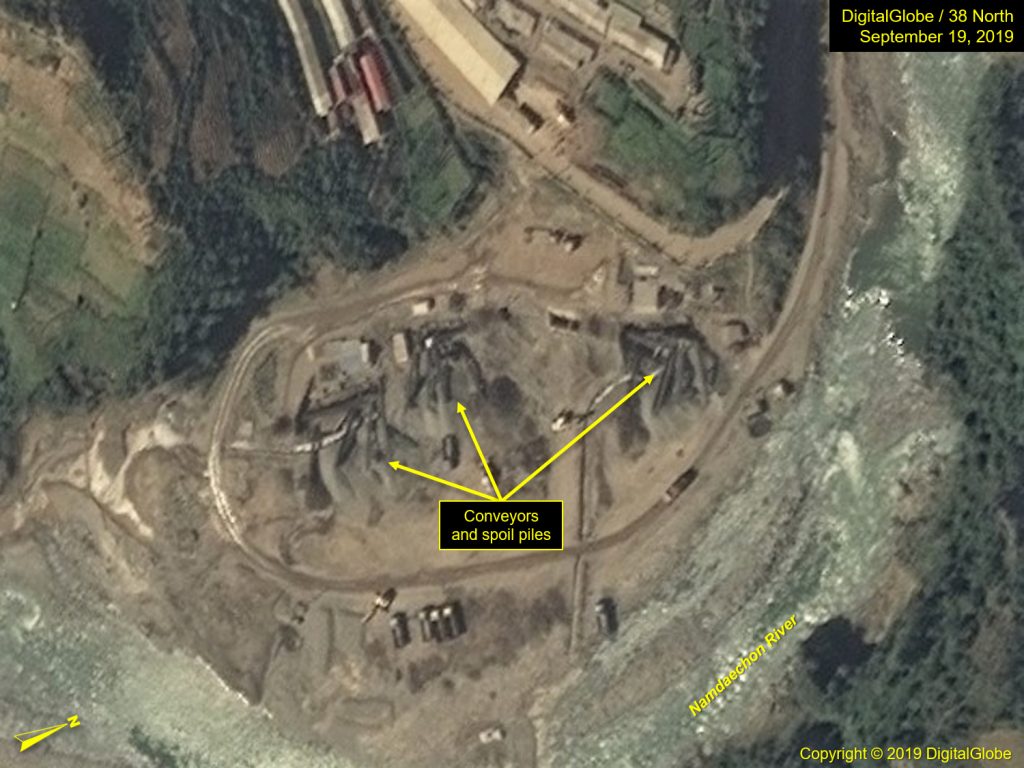 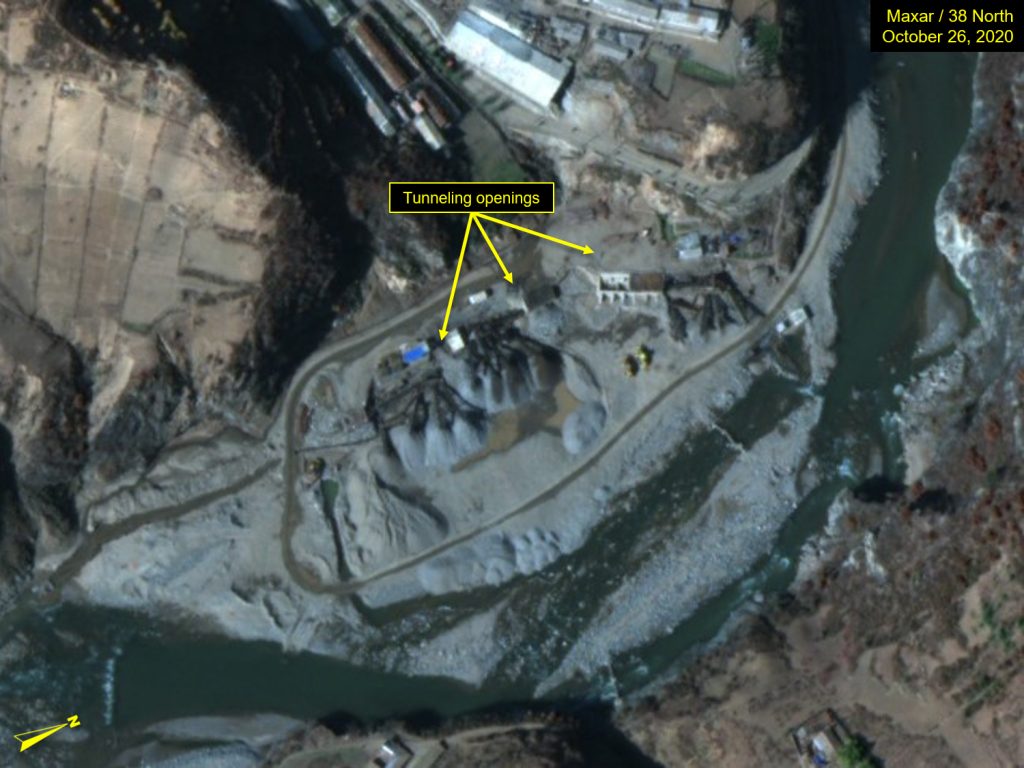 Farther downstream, just below Hochongang Power Station No. 1, the riverbed tunneling activity observed as late as March 13, 2020, has been washed away; clearly a setback for its intended purpose. It is likely that these tunnels are meant to service future power stations to be located downriver, hydroelectric stations which may be part of the next stage of the Tanchon Project. 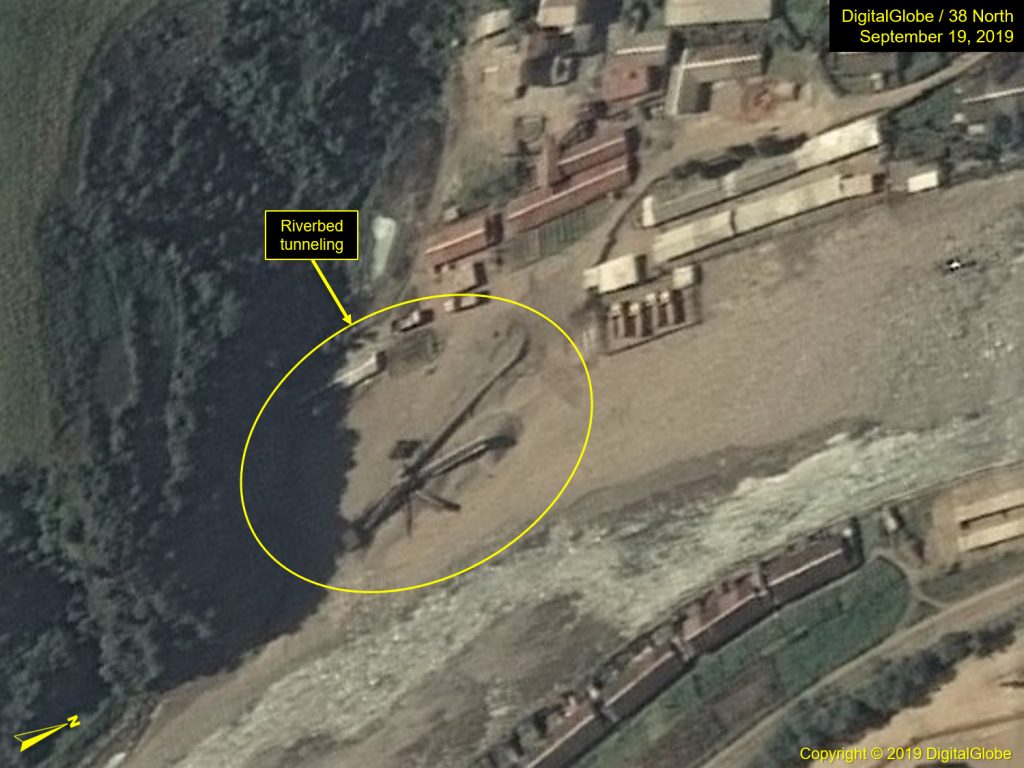 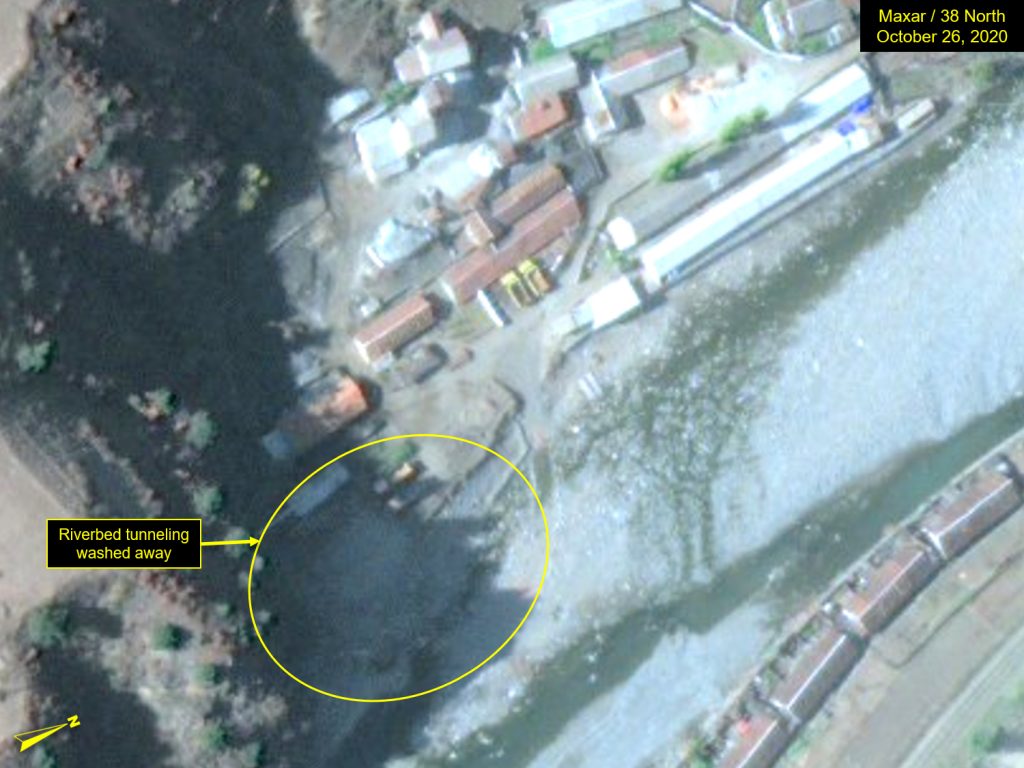