In their latest report, the POE noted how North Korea had used barges on at least seven occasions to carry vehicles and industrial equipment in breach of UN Security Council resolutions, publishing images showing the vessels transporting trucks and tanker railcars.

Another image taken by a Maxar satellite on July 11, 2020 shows a further two barges holding position in the Taedong River. One of the barges appears to be carrying a cylindrical cargo covered by tarpaulin or plastic, while the other is carrying either material in bags or using a plastic cover to transport a small amount of material underneath.

North Korea had previously only used this type of barge to transport designated raw materials, simply piling the bulk goods into the holds without covers, containers or packaging. But the new images from both Maxar and the POE indicate that Pyongyang is using the vessels more extensively in its evasion programs.

The expanded use of these barges could spell additional trouble for sanctions enforcement going forward. The vessels are difficult to differentiate and broadcast little or no identifying information, making typical open-source methods related to tracking associated company networks and their owners more challenging. These types of open-source investigations into North Korea’s maritime evasion practices have previously yielded results that lead to new designations from the UN Security Council (UNSC) and the Office of Foreign Assets Control (OFAC), in addition to providing a look into Pyongyang’s ever-expanding sanctions evasion toolset, which has helped formulate new resolutions and tighten the wording of successive rounds of UN and US restrictions.

But by employing the use of these barges to transport varying kinds of prohibited materials, Pyongyang is attempting to cut at one of the foundations of maritime sanctions enforcement. When combined with the other tools North Korea has available, it appears the North has not only gone one step further in defeating the current sanctions regime but is also making it more difficult to formulate future designations.

North Korea began using these types of coastal transport vessels in its illicit programs shortly after the previous US administration implemented its “maximum pressure” campaign. In textbook North Korean fashion, Pyongyang adapted to new restrictions on its trade with an array of new evasion techniques. Dubbed “self-propelled ocean-going barges” by the POE, the vessels were likely never intended to sail in international waters and subsequently offer numerous advantages over their more traditional counterparts within the context of North Korea’s preferred use cases.

The types of barges favored by Pyongyang do not typically sail out of coastal waters or rivers, so they are less likely to be registered in the types of databases used by maritime tracking services, making identification difficult. This lack of identifying characteristics is presumably at the heart of why North Korea appears to have transferred a portion of smuggling operations to these vessels.

Normally, ships sailing internationally require registration and documentation, including a unique International Maritime Organization (IMO) number. Using this number, investigators can quickly locate a vessel’s ownership and begin to build a picture of related entities and individuals. Yet these barges have no IMO numbers or associated registration, all but undercutting this investigatory avenue.

The barges seen in North Korean waters tend to be distinct from their more traditional ocean-going counterparts in numerous ways. These types of dry-cargo-carrying barges typically do not have covered holds, are generally wider and sit lower in the water than traditional cargo ships, and their bows are often rounder. They also frequently seem to lack much of the navigation and signaling equipment usually visible on vessels designed for longer voyages, nor do they have lifeboats.

When the UN Panel of Experts first identified the barges in 2019, it noted North Korea had already used this type of vessel to transport millions of tons of prohibited commodities, adding that North Korea was not known to possess this kind of vessel in its fleet, instead identifying them Chinese in origin.

Numerous recent satellite images of the Nampho area show these barges of various sizes carrying loose coal, with the POE also investigating several instances of the barges being used to transport coal between Nampho and the Zhoushan area near Shanghai. Additionally, the Washington-based think tank C4ADS published an article detailing how similar barges were being used to transport sand from Haeju to China’s shores.

In the DPRK’s common use cases, the barges were transporting materials sanctioned by the UN Security Council, and it would make little sense for North Korea to use these barges for regular trade.

Given that they were not built for traversing the open ocean, the barges sit low in the water and likely represent a high-risk transport method even compared to the DPRK’s rickety and aging traditional cargo fleet. Their lack of registration and associated paperwork must also greatly complicate the logistics and bureaucracy of trade. How and if North Korea is insuring these coal shipments that it is selling abroad, for example, remains an open question.

The area is a short distance westward from Nampho’s primary coal terminal. The docks do not contain the typical dark coloration indicative of regular coal loading or unloading, though one satellite image from February 2017 indicates shows a cargo vessel with a dark bulk cargo on the facility’s western side. Containers also do not appear to be frequently loaded or unloaded in this location. In their most recent report, the POE notes that this is the same area where barges have unloaded vehicles and other equipment that would likely constitute a breach of UN resolutions.

Figure 1. Overview of loading and unloading facilities in Nampho port.

The image of the area shows six white cylindrical objects located on the dock’s eastern side, approximately 10 meters in length, and are likely the same objects that the Panel of Experts identified as “storage tanks” in earlier images taken on July 4 and July 9, which had also been unloaded by a similar vessel.

The closest barge to the dock has two hold compartments, although these types of barges come in several configurations, with either one, two or three compartments. In general, it appears similar to a barge identified by the POE called Cheng Hong 28 (maritime mobile service identity No. 413180911), pictured unloading prohibited tanker railcars in the latest report.[1]

Like the Cheng Hong 28, the July 11 barge is not transporting bulk cargo. Instead, only the back compartment is being used and contains an apparently symmetrical cargo covered by tarpaulin of some type.

Figure 3. Barge with symmetrical cargo in its back hold.

The cargo under the tarp could be two objects lying next to each other, or the sheeting could be stretched over some kind of pallet. But the westward end of the cargo gives the impression of two cylindrical objects adjacent to each other, with the cover creating a slight crease between them.

The ship is between 80 and 90 meters in length, indicating that the cargo measures approximately 20 meters from end to end. If the measurements are accurate, this would likely make the barge’s cargo larger than storage containers on the nearby dock.

Similarly, the railcars in the image published by the UN Panel of Experts appear to be shorter than the cargo on the July 11 image, lying across the width of the barge as opposed to along the vessel’s keel.

If the barge is transporting cylindrical objects, they are probably larger than the vehicles and storage containers seen in other images released by the POE, though given the wide-ranging sanctions covering North Korea’s import of machinery, equipment and vehicles, it seems likely that the July 11 barge cargo is also prohibited.

The second barge is located a short distance eastward of the first in the July 11 image and appears similar in size and overall shape. Unlike the first barge, the second has a small rectangular structure at the front, a feature that is also visible in some of the barges highlighted by the POE.

In the second case, the vessel’s forward compartment is partially loaded with individual bags or possible cylindrical objects covered by blue plastic. The ship is a similar length to the first, suggesting that the cargo is only taking up approximately 15 meters of the forward hold compartment. 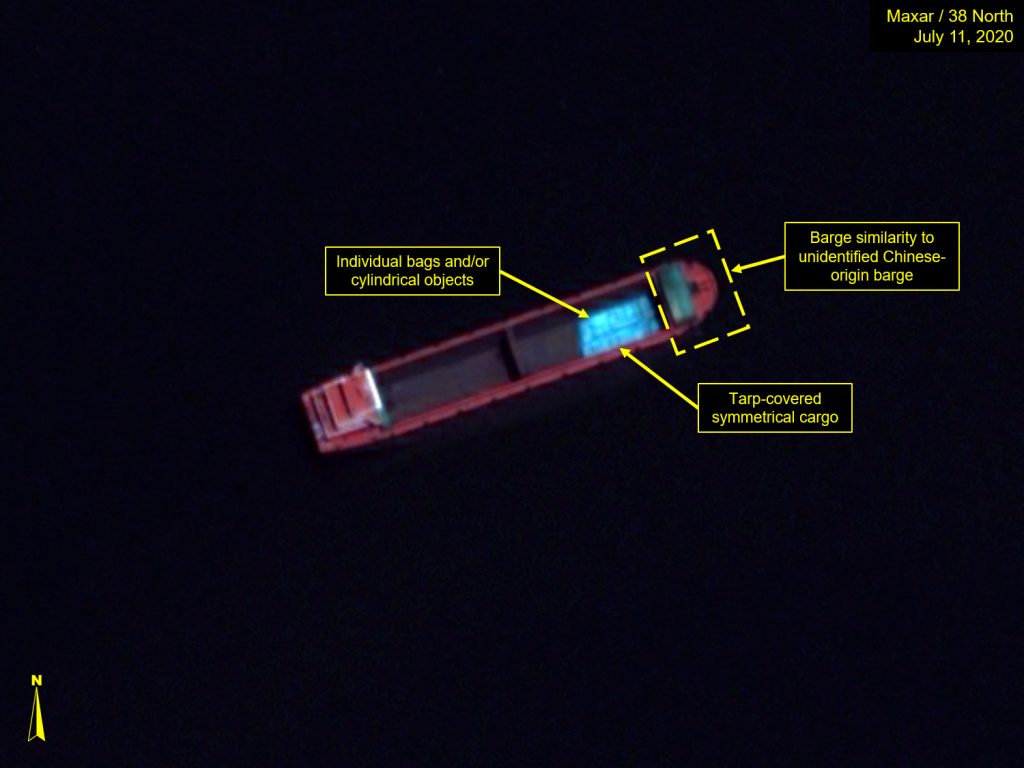 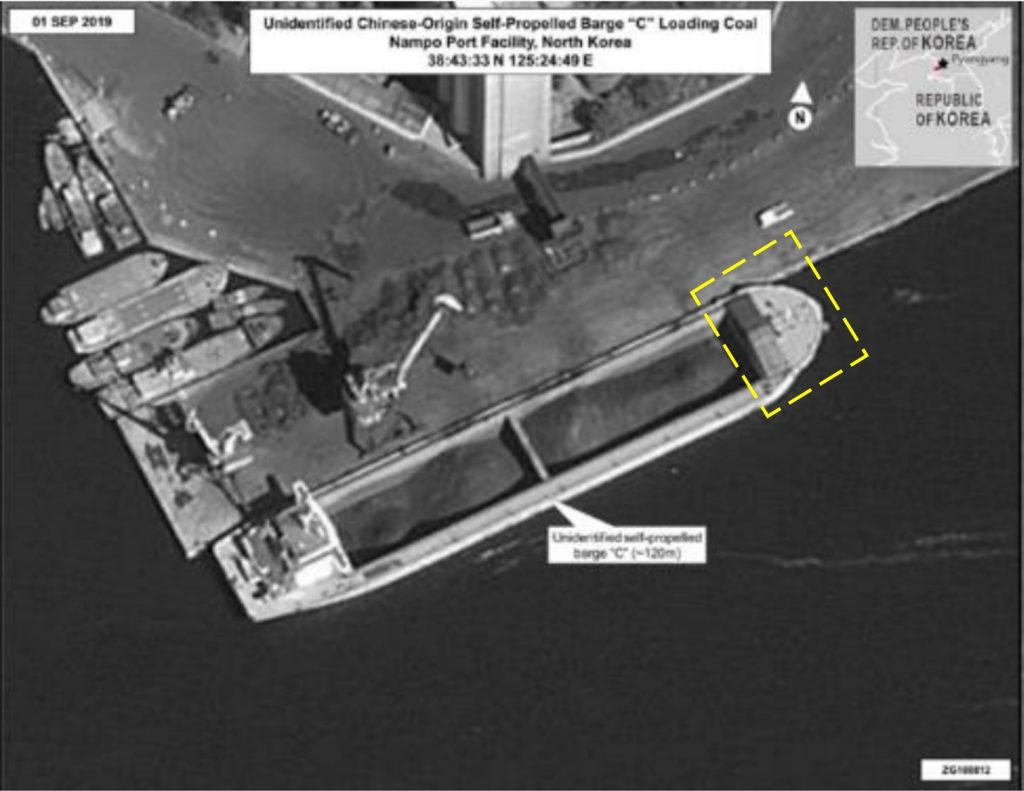 The POE also noted the presence of other barges in June last year carrying what it called miscellaneous cargo related to construction or industry, though once again, in those instances, the barge’s contents were not covered.

It is also worth noting that a later image of the port area near the two barges taken on July 22 contains similarly colored plastic sheeting or bags placed close to the white cylinders, indicating that the cargo may be related to construction or some type of industrial use. The July 22 image shows the same trucks highlighted by the POE, which were also deposited by barges, potentially solidifying the area as the favored delivery point for these types of transfers.

In the July 11 image, both barges are facing west to east, potentially indicating they have arrived in the Nampho area and are not departing, though neither seems to be under power and appear to be holding position waiting for suitable berth.

Between them, the two sets of images seem to highlight an emerging trend in North Korea’s evasion practices, with barges now being more widely used to transport illicit cargos in breach of UN resolutions. In these cases, it appears Pyongyang is willing to trade the higher risks associated with using coastal barges in ocean voyages for the added layers of obfuscation the vessels provide.

Although the POE has been able to identify some of the vessels by name and Maritime Mobile Service Identity (MMSI) number, finding additional information on the networks behind these sanctions-breaking transfers remains difficult. Previous rounds of maritime sanctions on North Korea have relied on being able to identify vessels by various means. In the past, photography by military assets has worked in tandem with open-source identification methods to provide starting points for investigations that would lead to additional research and subsequent new designations at the highest levels.

Invariably, many of these roads would lead to individuals and companies in China, which most likely also provided Washington with additional strands of evidence that together indicated that Beijing was not living up to its enforcement commitments.

But the barges are part of a new set of evasion tools that undermine these methods. Although they can be traced to Chinese waters, so far, the investigations have stopped there. Beijing has told the POE it could find no further information on the vessels (despite their Chinese origin), allowing it an even great level of plausible deniability. They equip Pyongyang with a near untraceable, short-range transfer method that it has proven willing to use for an increasing variety of prohibited cargos and, in the process, also allow Beijing a deeper myopia in its current willful blindness sanctions approach.

Going forward, it seems likely that North Korea will continue to use such barges for sensitive transfers, with their poor safety profile (even by North Korean standards) acting as their only limiting factor. The likelihood of the barges not making the trip may prevent their use in certain months or seasons entirely, but without additional measures from the UN, they will no doubt remain a mainstay of Pyongyang’s current sanctions evasion portfolio.