An assessment of forestland changes to North Korea’s more remote mountainous areas in the northern and southern provinces indicates that some devastated slope fields have been reforested and revegetated, especially in urban and tourist areas like Pyongyang, the Kaesong Industrial Complex and the Mt. Kumgang International Tourism Zone. However, the damaged slopes in some parts have been neglected to the point of devastation, and many of the steep, more arable hillsides appear to have been reclaimed by the local residents in the rural mountainous areas, likely as farmlands.

Change detection for this study is based on Landsat-8 Operational Land Imager (OLI) data (30-meter resolution), using the Normalized Difference Vegetation Index (NDVI) to compare Landsat images with close phenological cycles spanning from 2015 to 2020. The NDVI change results were then linked to and overlaid on Google Earth images, allowing for changes, both positive and negative, to be searched and verified.

Areas of Reforestation and Revegetation 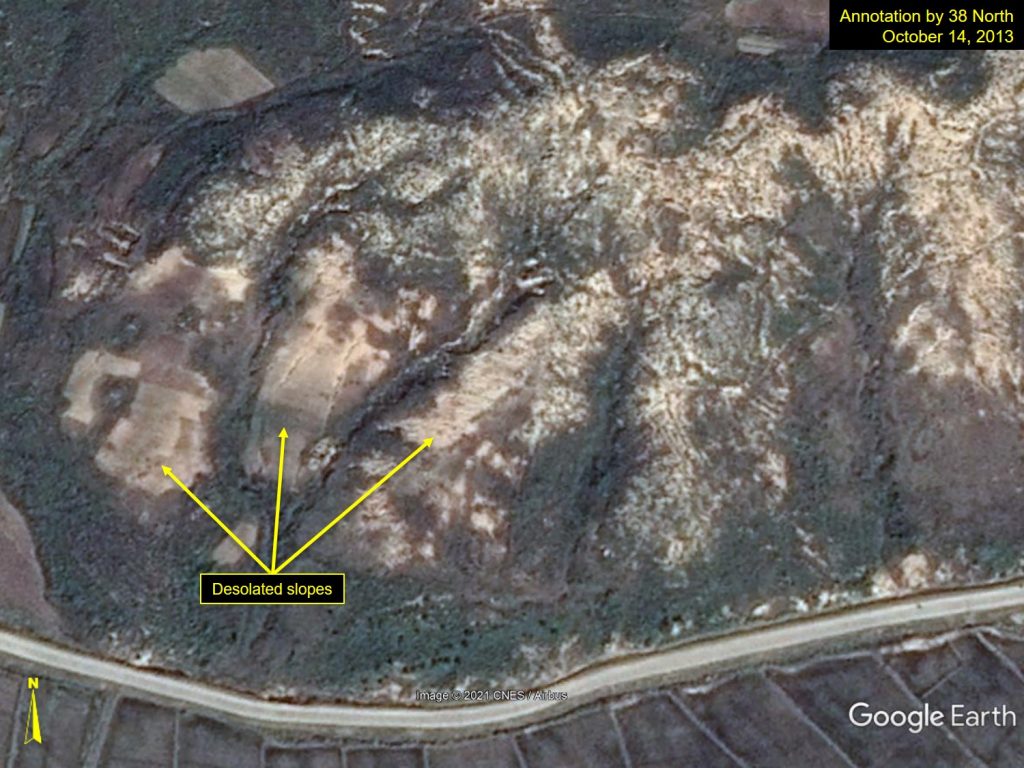 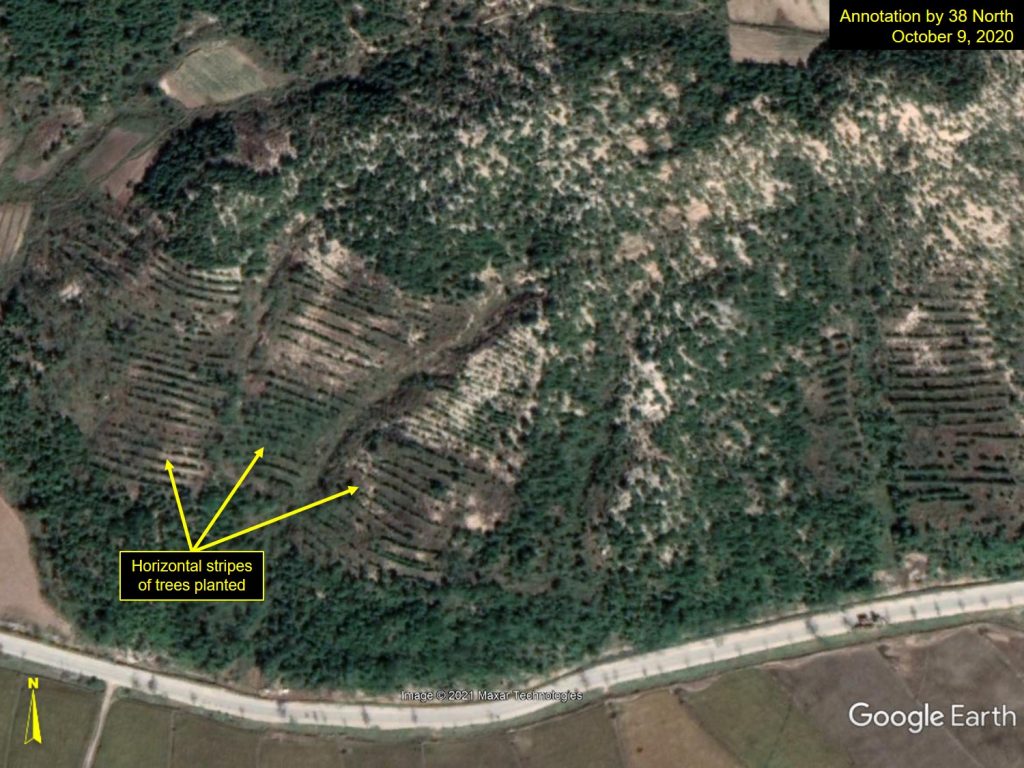 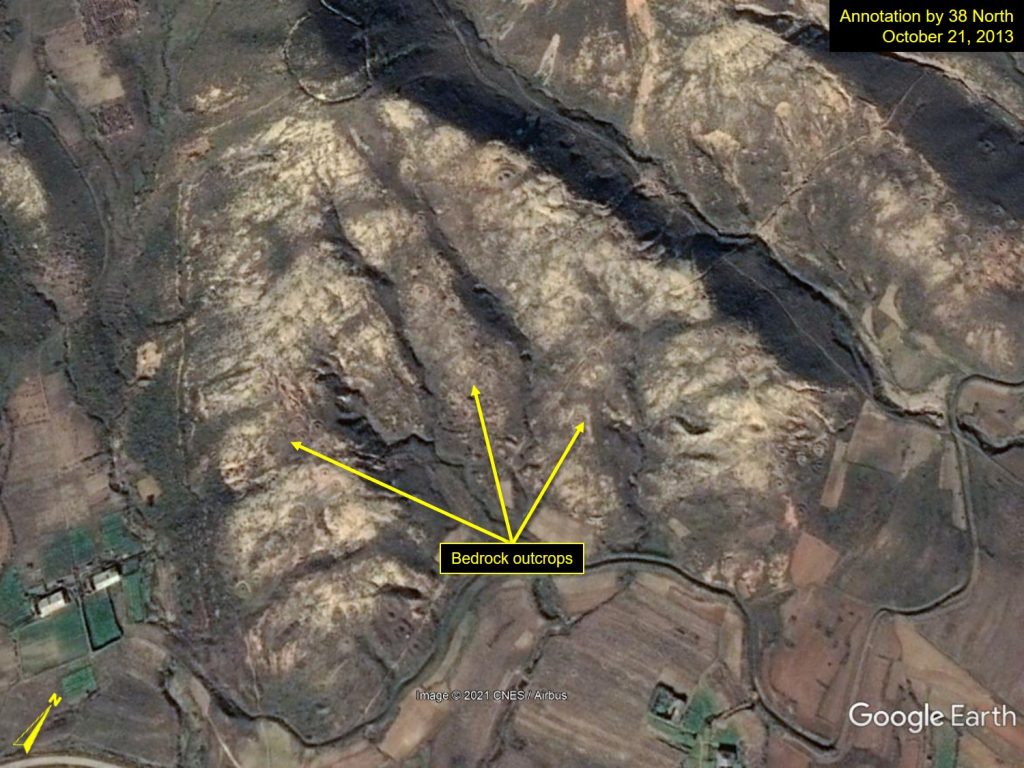 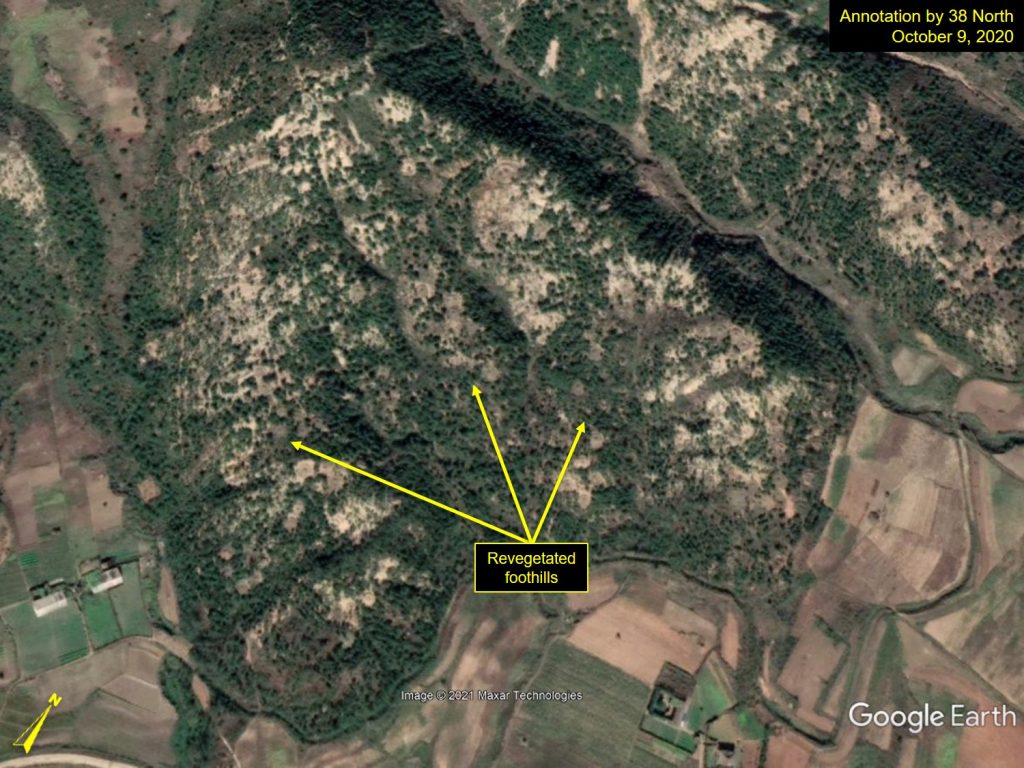 In Figure 3, a crop field has been revegetated with trees near the Rajin port in Rason starting in the spring of 2019. In this particular case, there seems to be a graveyard with large numbers of small mounds across the street in the upper part of the images.

Figure 3. Revegetated crop fields on a slope in Yokjon-dong, Rason.

A clear-cut hillslope was also reforested near the Mt. Kumgang International Tourism Zone in Onjong-ri, Kangwon Province. Reforestation efforts are visible in September 2015, but it was not until August 2018 that a majority of the hillslope was covered with trees. It is considered to be a part of the environmental beautification work to greet foreign tourists and travelers, most likely from China. 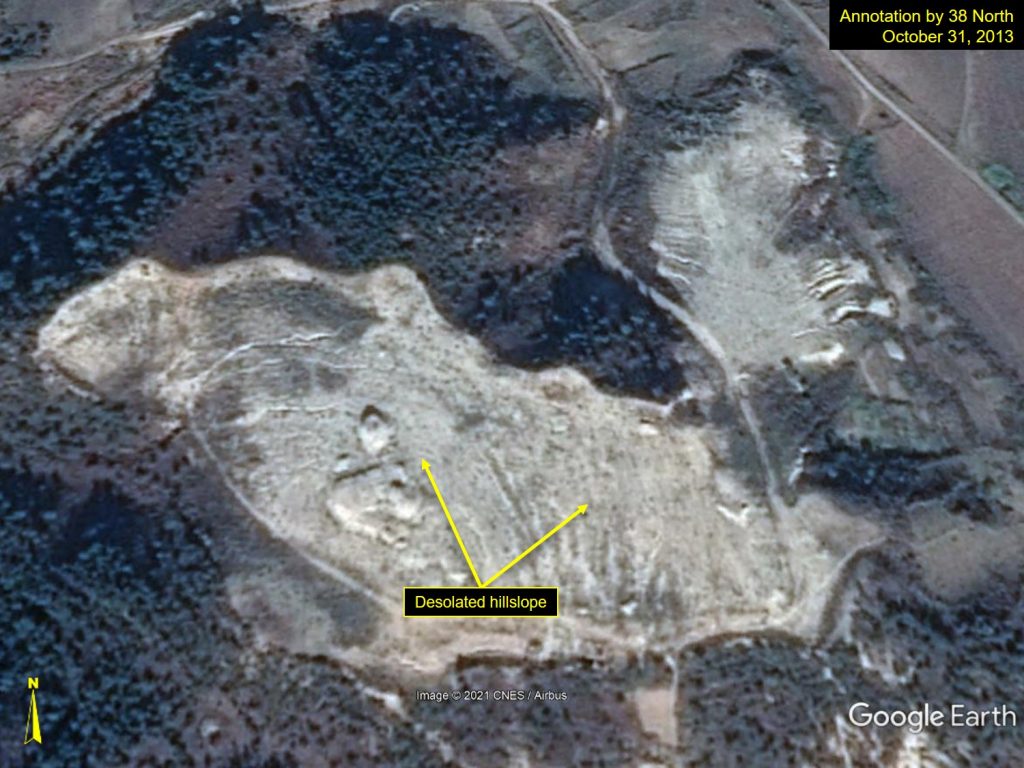 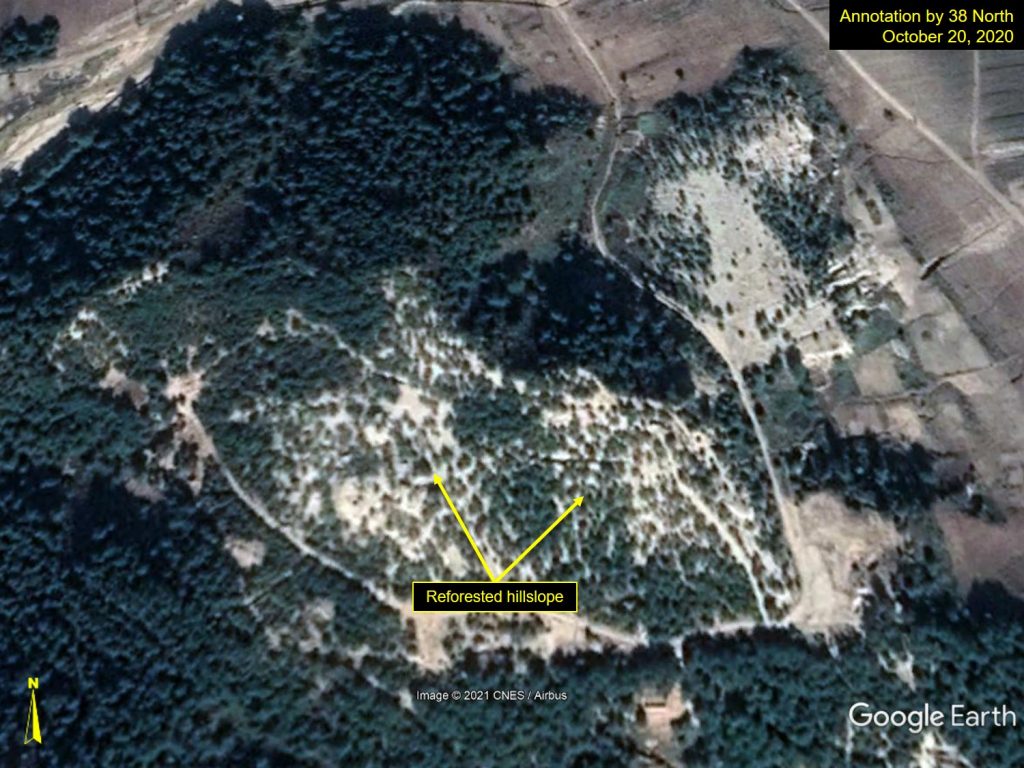 Starting in 2012, the government ordered for residents not to reclaim the hillsides with slopes exceeding 15 degrees to help prevent erosion and landslides (Song et al. 2017). As such, sometime before May 2019, large patch fields on steep slopes in Jagang Province near Manpho were reforested with probable coniferous trees. However, these efforts likely have a negative impact on the local communities, losing arable lands that previously enabled them to grow food and increase their self-sufficiency. 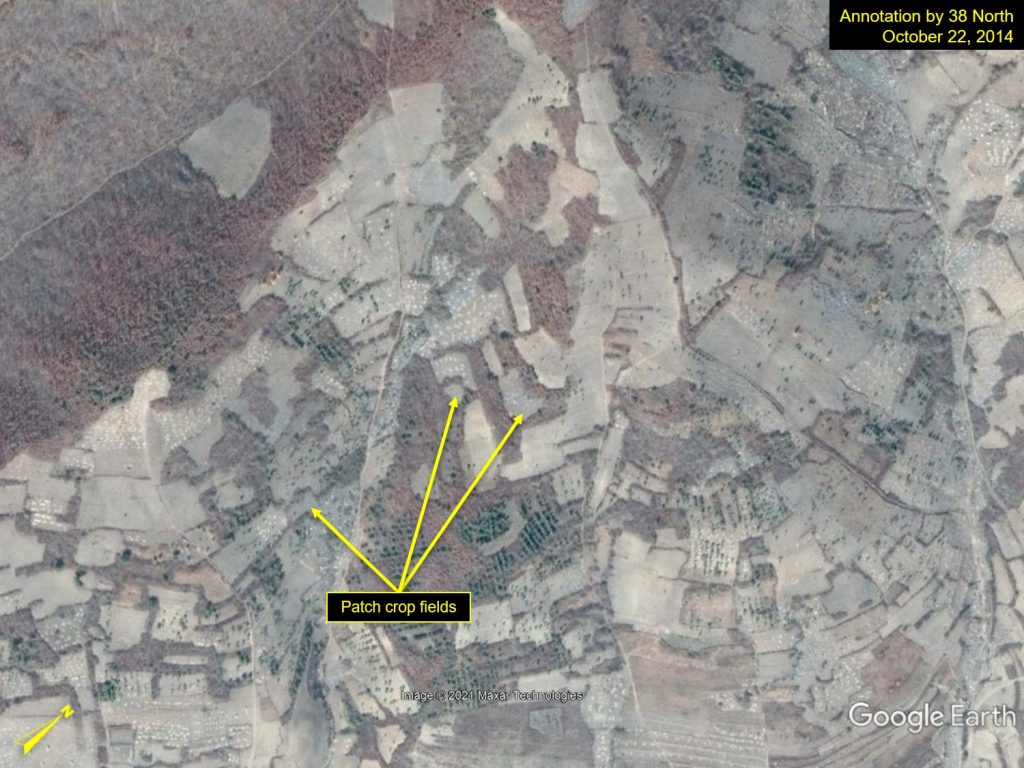 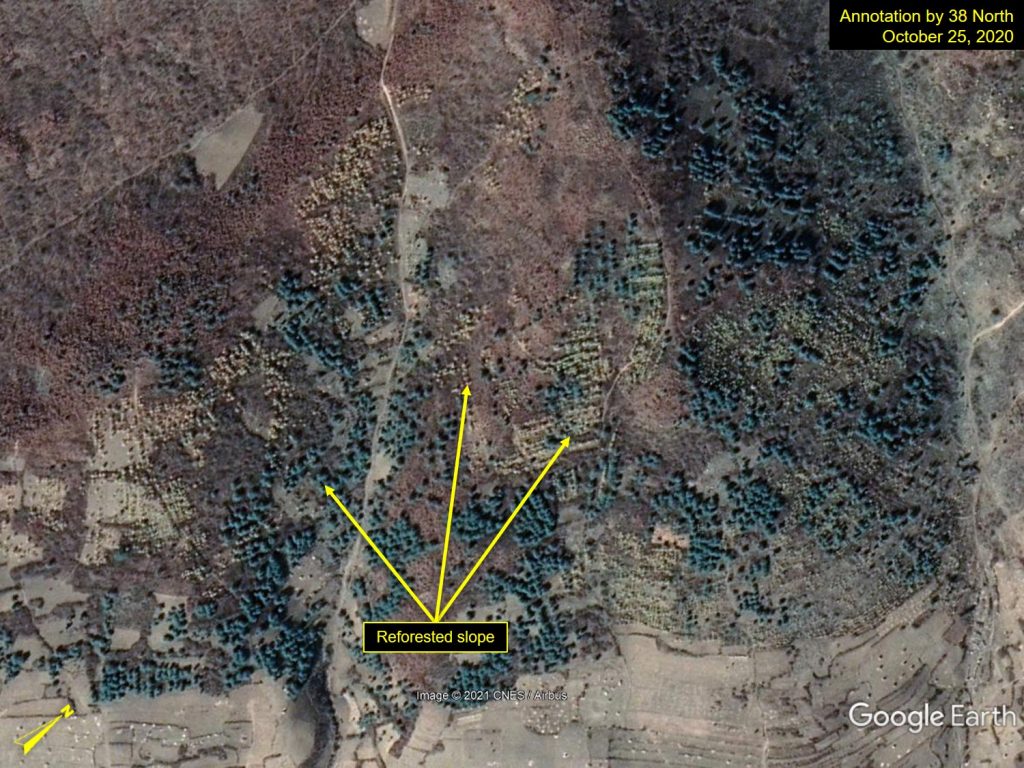 Forests Cleared off or Damaged

Images from Google Earth indicate that while reforestation and regeneration efforts were carried out in cities, places of tourism and specialized zones, devastated forestlands were neglected, and deforestation was still underway in rural and mountainous areas. For example, on a hilly slope deep in the mountains of South Hamgyong Province, spans of hardwood trees—full of autumn foliage in 2015—have been cut down by July 2018 (Figure 6). 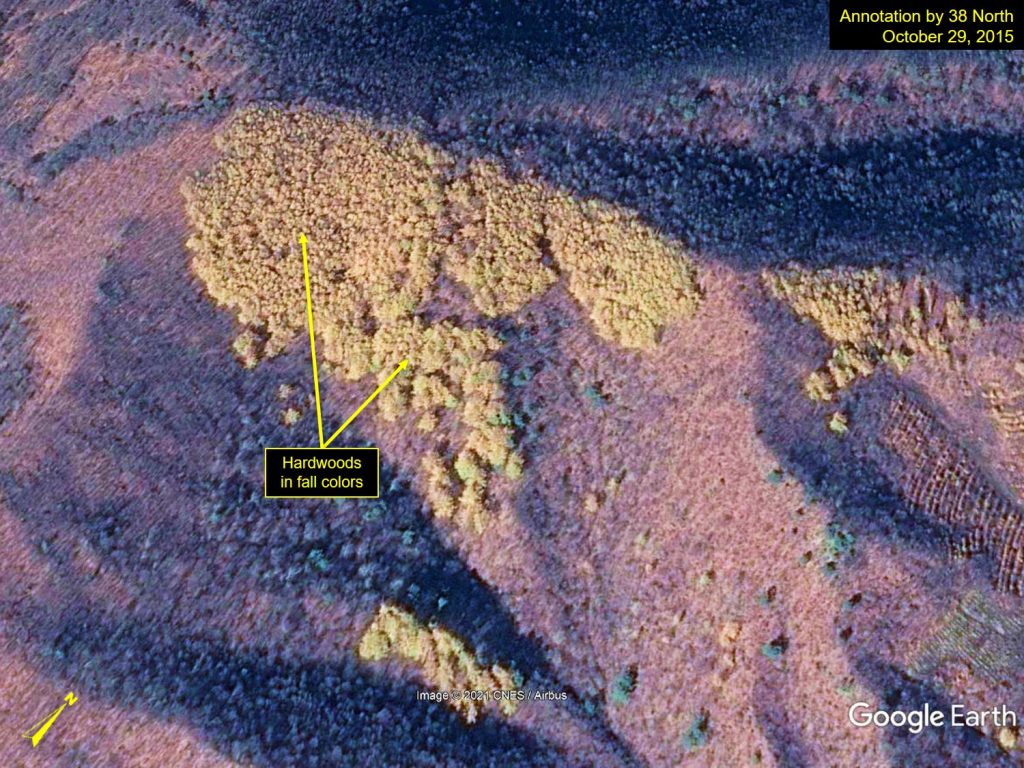 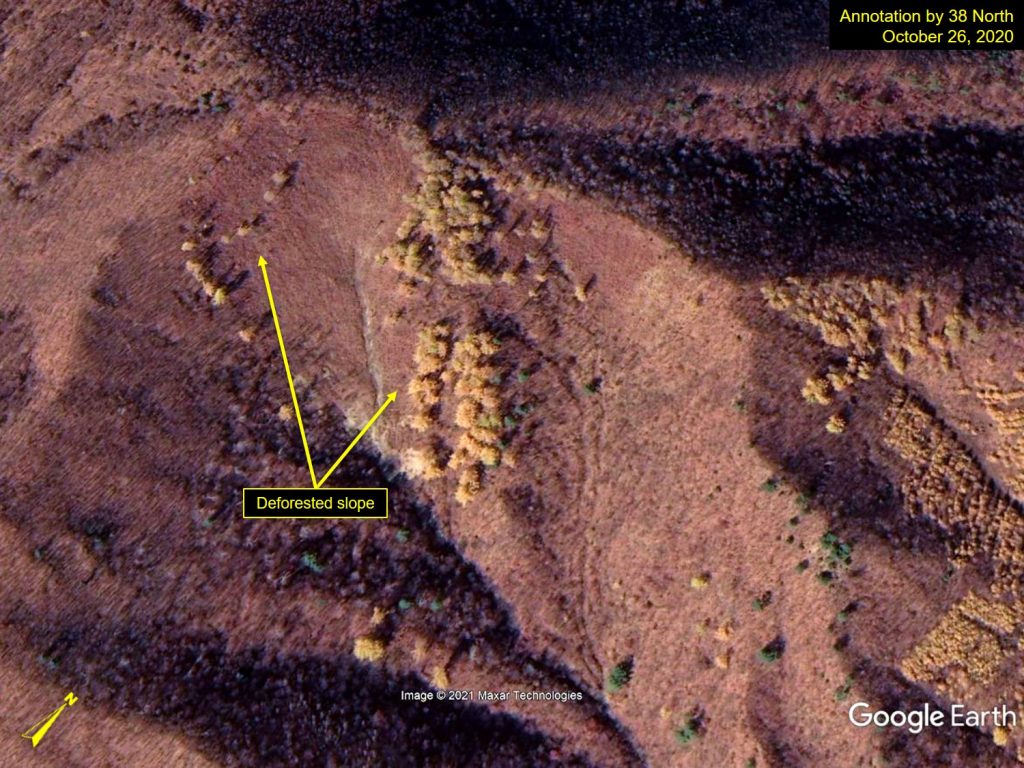 Ridge slopes in Namchang-ri were deforested after a forest fire around May 2015. The slopes were neglected for years following the fire to the current point of devastation.

Cultivation of hillsides has increased even on steep slopes starting in October 2015 (Figure 8), as villagers likely seek ways to secure more arable lands for farming. They may soon, however, face a crackdown by bureaucrats for the illegal farming. 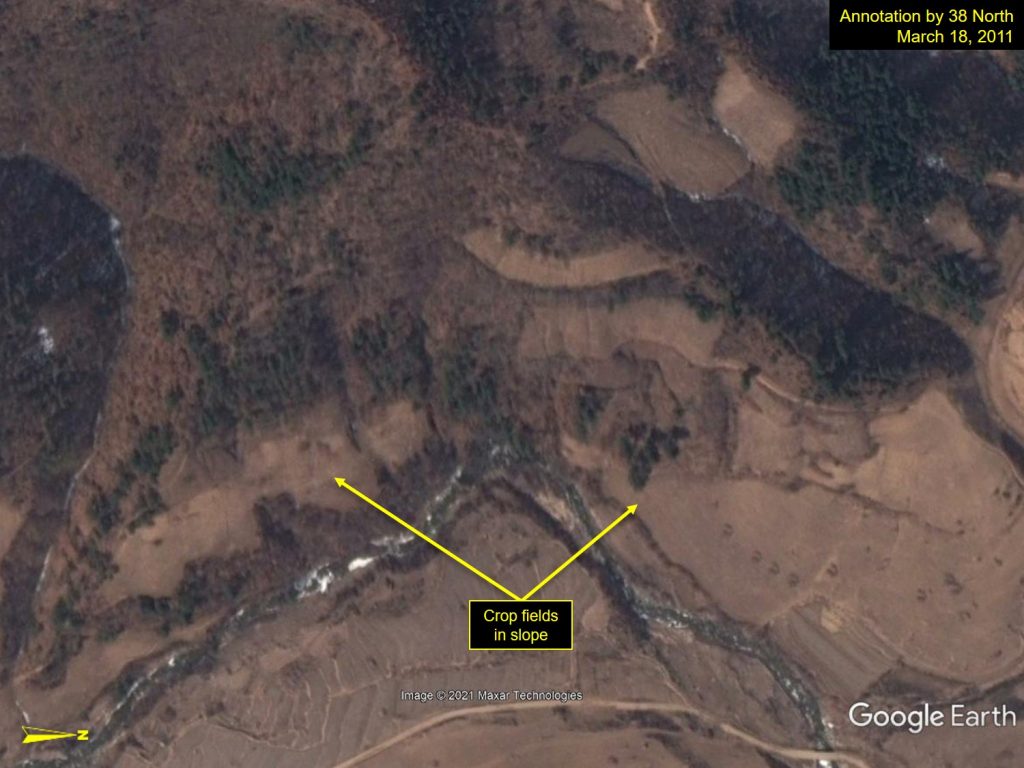 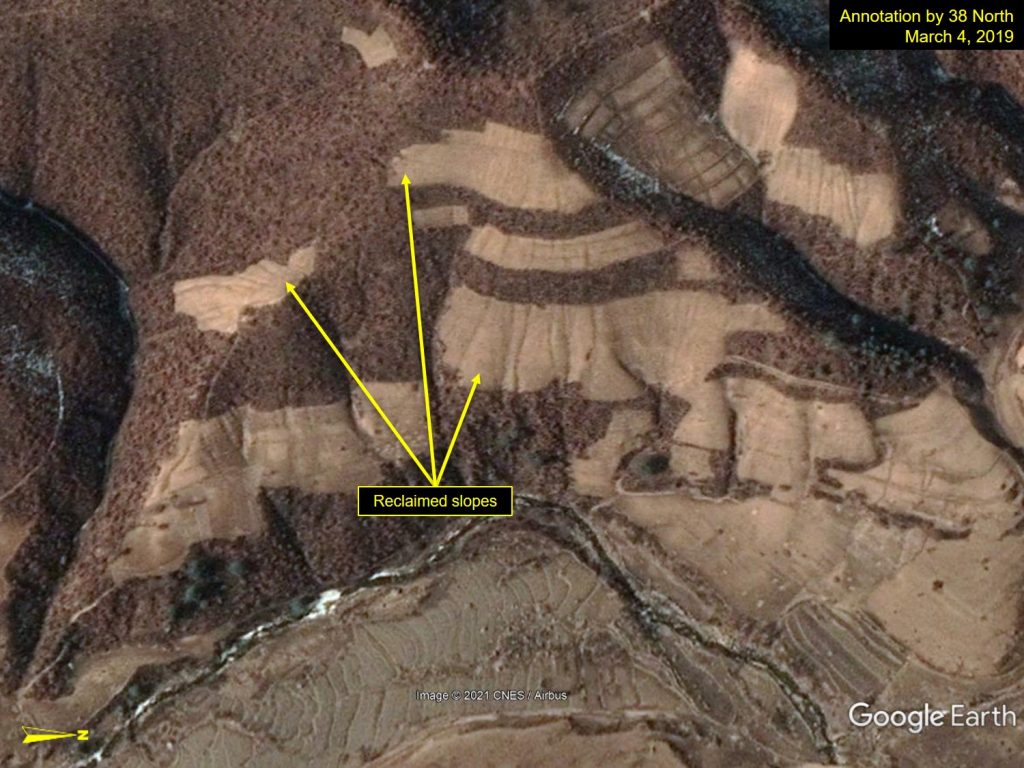 In Figure 9, forest fire scars were observed on May 6, 2019 in the Demilitarized Zone (DMZ), especially in the northern part. There is a surveillance and observation outpost at the top of the ridge about 950 meters above the stream that acts as a border between South and North Korea—although the distance should be at least 2,000 meters in accordance with the Armistice Agreement. Large forest fire scars were detected on the ridges around the outpost in May 2019 as well; it is a common practice for soldiers to deliberately set fire to surrounding trees and shrubs to secure a wider vantage point of the area.

Figure 9. Forest fire scars on the slope in the northern part of Demilitarized Zone (DMZ) at Udu Mtn., Kangwon Province. 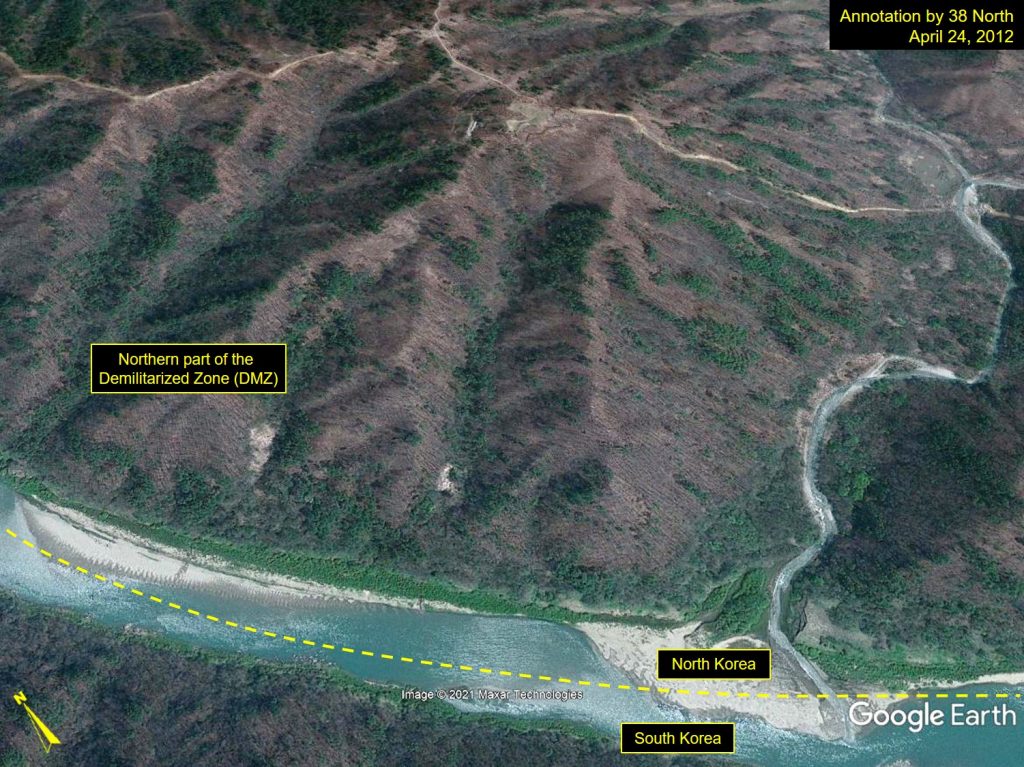 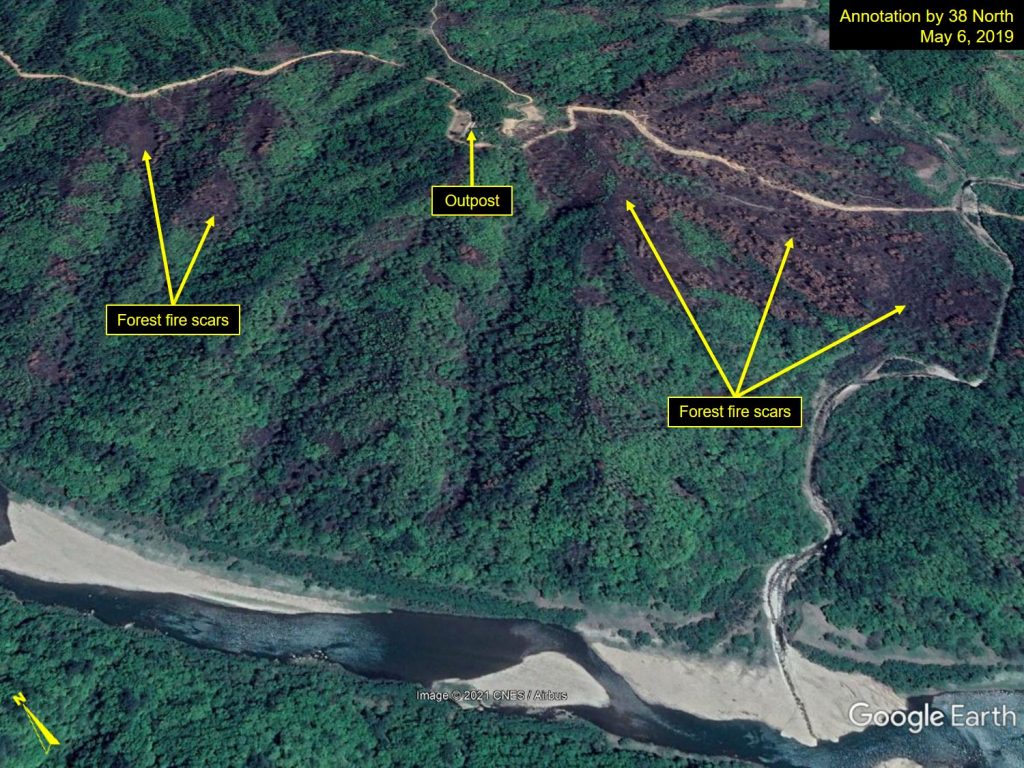 There has been a concerted effort to reforest devastated fields in northern and southern regions of North Korea, particularly near cities or tourist regions like Pyongyang, Rason, the Kaesong Industrial Complex and the Mt. Kumgang International Tourism Zone. The reforestation efforts might indicate that North Korea is prioritizing environmental beautification of these areas for visits from high-ranking officials and future foreign tourists. Kim Jong Un also instructed in a 2015 speech to: “make green forests thick on the mountains of our country, and make the entire mountain a golden treasure mountain.” (Lee 2016). Whatever the motivation, the reforestation and revegetation efforts are largely positive and desirable for preventing erosion and landslides, especially if North Korea expands the forestation project nationwide to more rural mountainous areas.

As reforestation practices spread throughout the country, however, tensions between rural residents and local bureaucrats may arise as the state’s reclamation efforts reduce the amount of arable land the local communities once used for farming. To maintain the successful efforts of reforestation in various regions, North Korea will need to address the issues of food and energy supply for rural citizens to reduce the risk of reclamation for private plots or use of trees for fuel. Making alternative fuels such as coal or gas available and accessible to rural villages, the residents can ease their reliance on wood for their heating and cooking needs.

See 38 North’s December 2020 article for an assessment of reforestation work in Pyongyang and South Pyongan Province.