Commercial satellite imagery of North Korea’s Yongbyon Nuclear Scientific Research Center from July 5, 2022 indicates that despite heavy rains over the past several weeks, the 5 MWe Reactor continues to produce plutonium for the country’s nuclear weapons program. Moreover, smoke is observed emitting from the Thermal (Steam) Plant at the Radiochemical Laboratory, which may signal early preparations for a forthcoming reprocessing campaign or treatment of radioactive wastes. This may help explain recent activity at the spent fuel reception building and Building 500, as also recently reported by CSIS’ Beyond Parallel. Dismantlement activities continue at the 50 MWe Reactor after recently reported trenching activity at its nearby pump house.

To date, no major flooding is apparent, although increased humidity and constant rain may cause problems in some process buildings. Continued rain could bring about flooding of critical facilities later this summer, which may hamper fissile material production.

At the 5 MWe Reactor, cooling water discharge has been observed throughout May and June and continues in July, as indicated by cooling water discharge. The heavy rains over the past 40 days do not appear to have caused any complications to reactor operations as of yet, although water levels are rising, and work is underway throughout the center to help prevent severe flooding.

Activities reported in May 2022 have continued at the spent fuel reception building. There are, however, notable new developments at the Thermal Plant and at the building suspected to be a radioactive waste storage facility (Building 500).

On July 5, a faint smoke emission, more easily seen by the shadow it cast, is visible emanating from the stack of the Thermal Plant. Smoke was last seen from this stack in July 2021, which marked the end of what was believed to have been a spent-fuel reprocessing campaign, carried out between February and July of last year. No emission was visible on imagery from July 3, as noted in a report by CSIS’ Beyond Parallel. It is too early to conclude whether a new reprocessing campaign has commenced or if steam is being produced for the radioactive waste handling facilities. The steam could also be used to remove humidity from the process buildings caused by excessive rainfall. Additional monitoring for continued emissions or an increase in volume is necessary to follow the development of activities at the reprocessing site.

There have been vehicles visiting the area of the spent fuel reception building, although they do not appear to be associated with the actual transfer of spent fuel. Piles of materials or equipment have also appeared in the area, which could indicate ongoing routine maintenance or small construction work.

At Building 500, a suspected radioactive waste storage facility, new activity is apparent. While better viewed in the July 3 image featured in the CSIS report, this likely excavation activity could signal efforts to refurbish the facility, or possible early stages of building expansion or modification.

There have been no signs yet of operations at the ELWR. However, construction continues at the small complex of buildings just outside of the reactor’s security wall. Construction of these buildings began in 2021, and exterior work on two of the buildings was largely complete by April 2022. Progress on the third building is ongoing. Since April, the addition of a second floor has started, suggesting it may be a two-story structure when complete. The function of these buildings is yet to be determined. 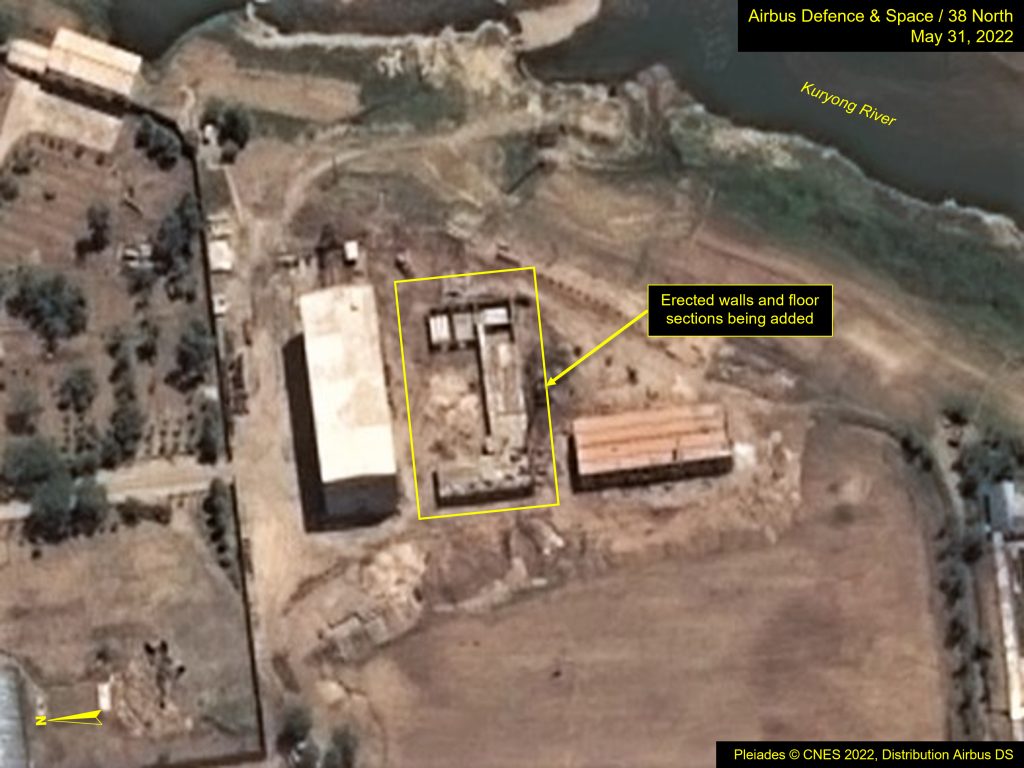 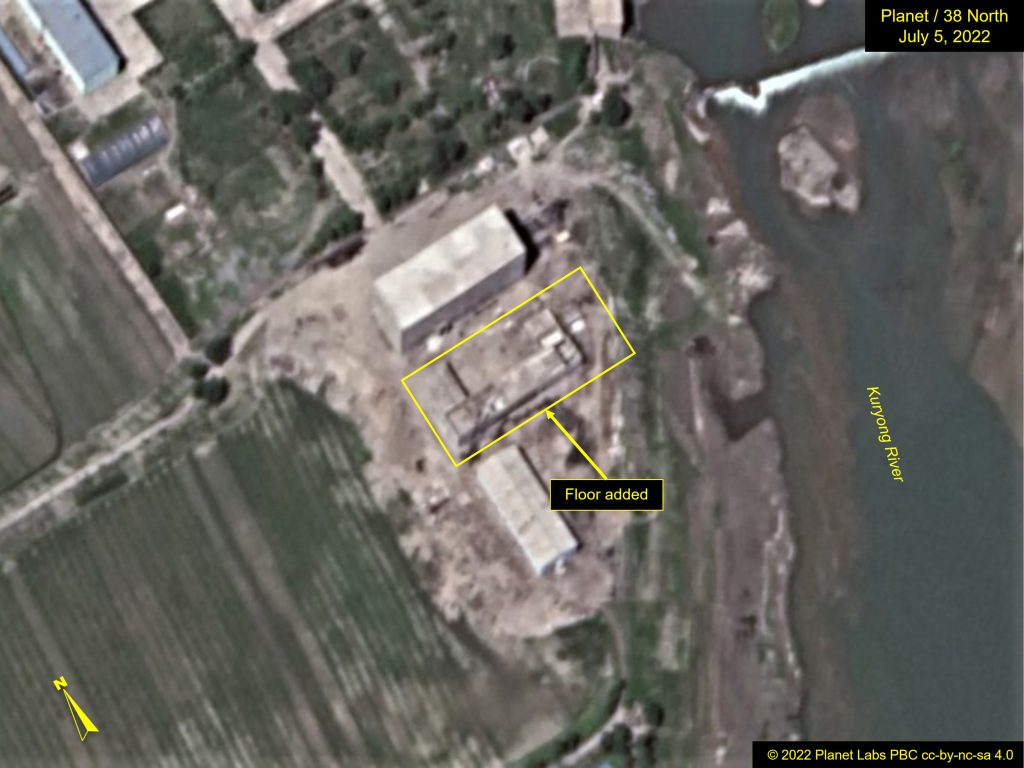 Dismantlement at the 50 MWe Reactor Complex

Little activity is observed at the 50 MWe Reactor complex despite recent trenching activity near its associated pump house. However, since May, additional roof panels have been removed from the south wing of a building next to the reactor hall. The continued cannibalization of the reactor facilities suggests the need for these materials for other projects within the Yongbyon complex, where probable building materials shortages are likely. Alternatively, the North Koreans may be slowly dismantling these deteriorating buildings altogether. Until now, there has been no sign of dismantling activities at the reactor buildings, which requires more resources to complete.

Figure 6. Roof panels removed from building near 50 MWe Reactor hall between May and July.

Since the reported trenching near the pump house and underground facility was completed in early May of this year, no additional related activity has been observed. Instead, in the field where this had occurred, rows of crops are now present (this field has previously been used for agricultural purposes). This suggests the limited nature of the trenching was likely related to water drainage repairs needed to protect the underground facility.