Kim Jong Un’s visit to North Korea’s Sohae Satellite Launching Station in March 2022 provided a clear mandate to upgrade and expand the site’s capabilities. While it took a few months for this transformation to begin, major changes were underway by early September. Commercial satellite imagery from October 23 and 24 indicates significant activity taking place throughout the site, especially at key areas such as the launch pad and VIP housing area. Additionally, a new road network may provide the North Koreans more direct access from the complex to the workers’ housing areas and eventually down to the sea.

There has been significant activity at the Sohae launch pad since late summer.

Since July, work appears to have started on modifying the gantry tower. Additionally, the mobile transfer shelter, used to move assembled rockets to the gantry tower, has been moved away from the rocket processing/preparation building, exposing the access opening to the underground rail-receiving area.[1]

Work to expand the capacity of the fuel and oxidizer bunkers located to the south and southwest of the launch pad continues. Furthermore, since July, neatly arranged stacks of materials have been observed on the south side of the pad: some appear to be cylindrical—five large and four small—and may be fuel and oxidizer canisters removed from the bunkers when refurbishment activities began.

In addition, the foundations for two buildings are now underway at the northwest end of the launch platform. It is too early to suggest their purpose, but each is subdivided into a series of interior rooms. Immediately east of these buildings, a road and bridge are under construction that will eventually connect the main road to the underground receiving area of the launch pad. This will likely allow rocket components to be moved into the facility by both road and rail.

On the hilltop southwest of the launch pad area, two probable water tanks have been installed. These are likely intended for fire suppression and will employ a gravity feed when complete, although no evidence of trenching for piping is yet observed.

Figure 2. Close up of construction on the launch pad.

Major changes have been made to the VIP housing area since early September. This includes the complete razing of the old launch control building and laying of the foundation of a much larger building to the west, along the access road. Additional grading is visible on either side of the new building, suggesting additional building construction may be forthcoming.

Figure 3. Former control center has been razed and foundations have been laid for a new building.

The Vertical Engine Test Stand (VETS) has seen few changes to date. The departure of the support vans from the stand’s apron was noted in early September, and the retractable shelter had been pulled back from the test stand between September 26 and 28, although it was returned adjacent to the stand October 1. It is unclear whether the stand is currently operational or what kind of modifications are expected.

Importantly, a new access road now connects to the southeast side of the pad. Previously, the pad has been only accessible from its northside. The new graded road enters from the east and follows a meandering path outside the old perimeter of the complex. This strongly suggests a new access road into the Sohae complex is planned.

Along the road, further to the east, two buildings are under construction. They are adjacent to a farm co-op building, distinguished by its blue roof, constructed in late 2017, around the same time similar buildings were constructed within the complex to support its agricultural activities.

Perhaps the most interesting changes occurring are those to connect the complex to the east coast. In addition to the roadwork terminating at the VETS, significant construction is underway on a road tunnel connecting the east end of the VIP housing area to the coastal town to the east, where a large workers’ housing area is located. Imagery from October 25 shows hundreds of personnel working at each entrance, underscoring the scale and priority of this tunnel project.

Sohae is strategically located in a valley surrounded by steep mountains with only one access road to its north. This tunnel will open a more direct route from the coastal town, which has been greatly expanded since this spring to house workers and provide support capabilities, into the complex.

Figure 5. Work continues on a tunnel from the complex to the coastal village.

Figure 6. Close up of the west and east tunnel entrances. 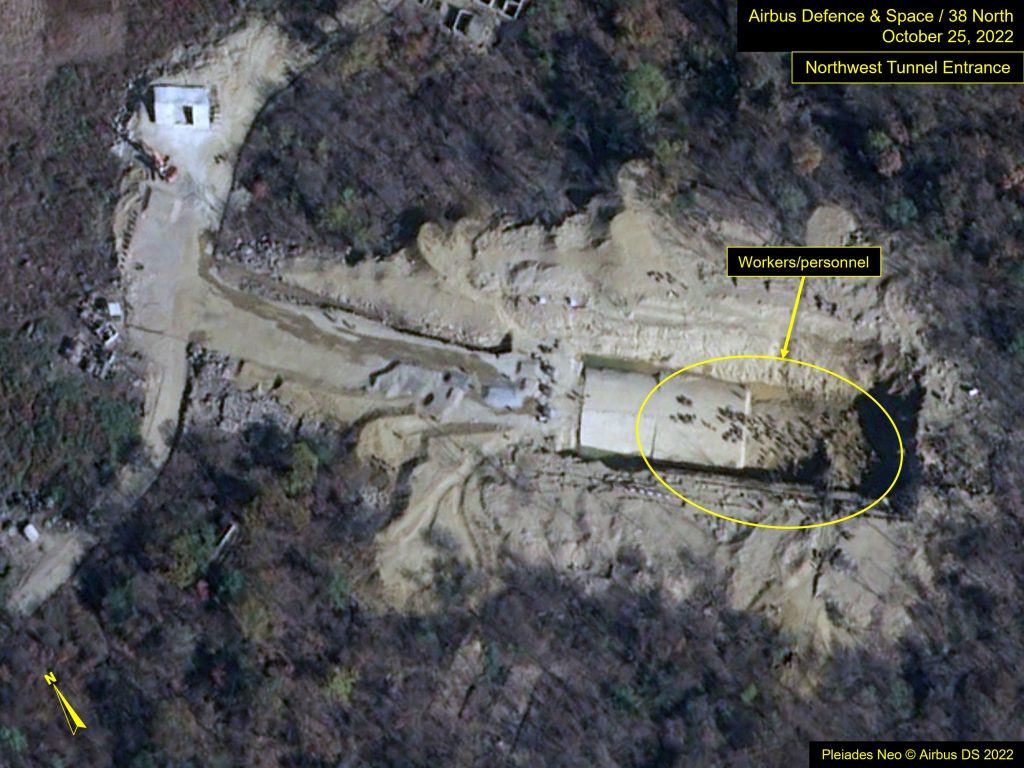 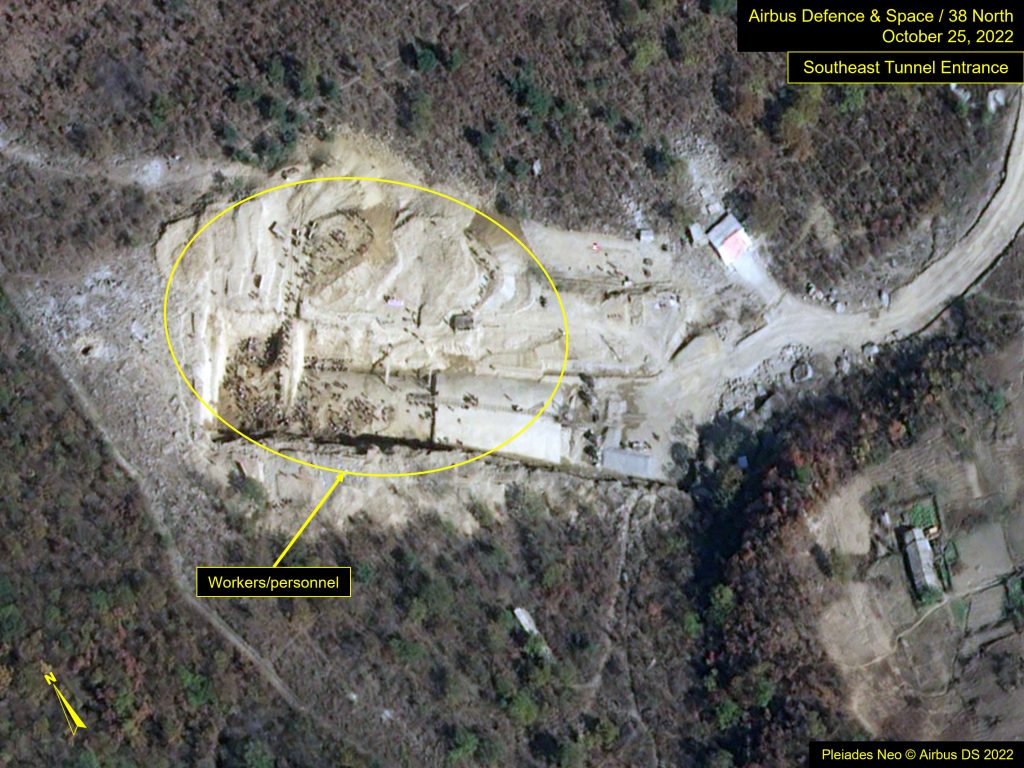 In addition to the tunnel, a new road is being constructed that runs south from the town, parallel to the coastline and an older, much narrower road. The new road will connect to the tunnel and the new VETS access road and terminate at a small village located southeast of the complex. That village has also been recently expanded with apparent workers’ housing and other support buildings.

In addition, at its southernmost point, an earth and rock ramp has been constructed and is being extended into the sea. Whether it will remain a ramp or eventually be converted into a quay or pier is unclear. But the location is less affected by tides than the larger coastal town to the north, making it conducive to serving as a future sea transfer point for site-related equipment and materials. Although Sohae is serviced by rail, the journey from the factories located closer to Pyongyang is considerable; therefore, transfer by sea may be more desirable.

Figure 7. Roadwork along the coastline.