Commercial satellite imagery of the Yongbyon Nuclear Scientific Research Center indicates operations at North Korea’s 5 MWe Reactor have been ongoing over the past few months, and expansion of the support infrastructure at several key facilities throughout the Yongbyon complex continues. These developments reflect the North’s intention to continue advancing its nuclear weapons program.

Imagery indicates that the 5 MWe Reactor has been operating since July 2021, as evidenced by a consistent presence of water discharge from the cooling system into the Kuryong River and light vehicle activity around the reactor building throughout this time period. However, to date, there have been no signs of fuel rod discharge or shipment of spent fuel to the Radiochemical Laboratory (RCL), a necessary pre-step to being able to separate plutonium from the spent fuel.[1]

Furthermore, there has been no evidence of any recent reprocessing efforts at the Radiochemical Laboratory, but some maintenance activities appear to have been conducted during the summer months.

There have also been no signs of operation at the Experimental Light Water Reactor (ELWR). If this reactor—which has been under construction since July 2010—is brought online, it would substantially increase the North’s plutonium production capability.

On imagery from August 24, a plume was observed from a stack of the building that has been used for hydrogen fluoride (HF) handling, a chemical used for uranium dioxide (UO2) conversion to uranium tetrafluoride (UF4).[2] However, it has not been seen in subsequent imagery.

Despite all activities observed around the UEP, it is not possible to conclude whether the plant is operating based on imagery alone. For instance, no tanker trailer transferring liquid nitrogen—which was regularly observed during periods when the plant appeared to be operating—has been seen in recent months.

Construction has been underway throughout the Yongbyon complex in recent months, best illustrated in an image from October 18, 2022.

What appears to be a new building is under construction in a field adjacent to an underground facility located east of the 50 MWe Reactor complex, near its associated pump house. Earlier this year, some trenching work was done in this area, although for what purpose is still unclear. Given that the 50 MWe Reactor was never completed and is gradually being dismantled, the earlier trenching and this new building could be related to the nearby underground facility or supporting agricultural activities.

It should be noted that this newly observed foundation work is taking place in the same spot where a building once stood a decade ago. The previous building was razed in 2011, and the site was covered over. That building measured approximately 7 by 18 meters, whereas this new foundation is approximately 7 by 14 meters. This strongly suggests that a new building is being erected rather than simply uncovering the previous building’s foundation. On October 19, a thin, linear trench was observed running from the northeast corner of the foundation to the edge of the wooded area to the northeast.

Figure 3. New building under construction in field near an underground facility where trenching occurred earlier this year.

At the former Fuel Rod Fabrication Plant site, construction of a building of unknown purpose on the southeast side of the complex next to the Metal Alloy Workshop has resumed after several years of stalled activity.

Additionally, activities to dismantle or repurpose the UO2 to UF4 Conversion Plant, which were first observed in imagery from July 22, continue. One of the two multi-story buildings has been fitted with a clerestory upper floor, while the roof of the other building has been removed. At this stage, it is not possible to determine the purpose of these efforts.

Figure 4. Construction and dismantling work observed around UEP on October 18, 2022. 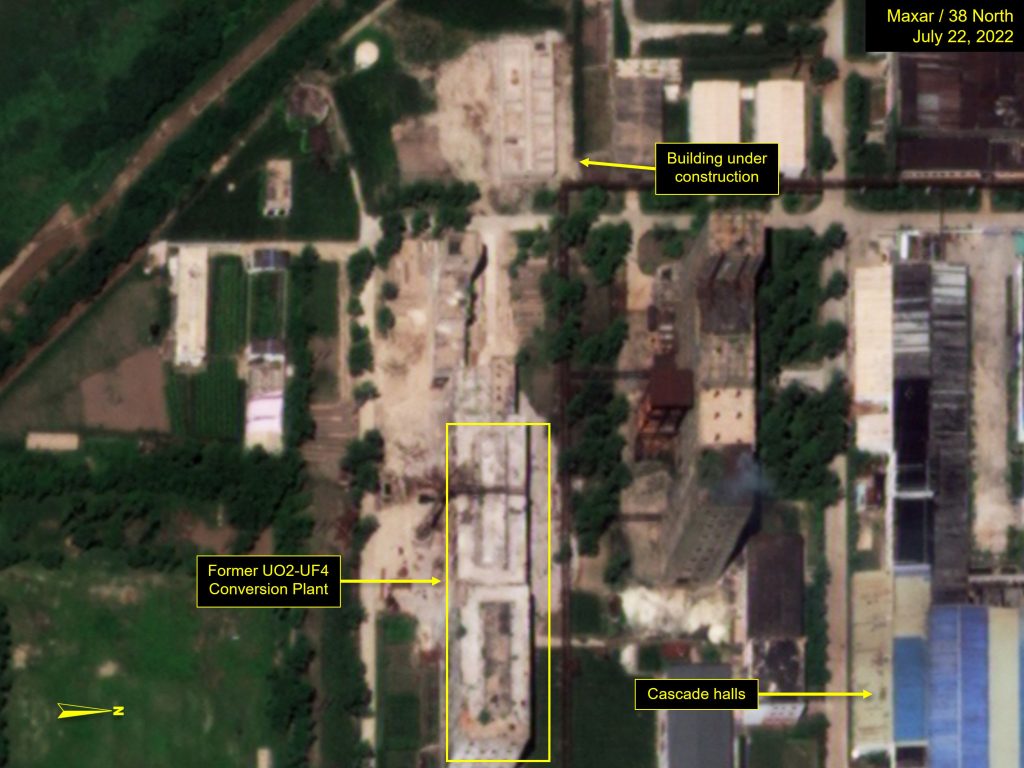 At the RCL, a new building is being constructed at the southwest side of the complex, just outside of the security perimeter. The purpose of the building, or whether it will ultimately be incorporated within the confines of the RCL, is unknown.

Around the ELWR, construction of a new two-story building adjacent to the engineering office building west of the reactor, which was first observed in imagery from July 22, continues. This area was previously the location of a greenhouse.

Additionally, the previously reported three-building complex, located immediately south of the ELWR just outside the security perimeter, appears to have been completed. The functions of these three buildings remain unknown. 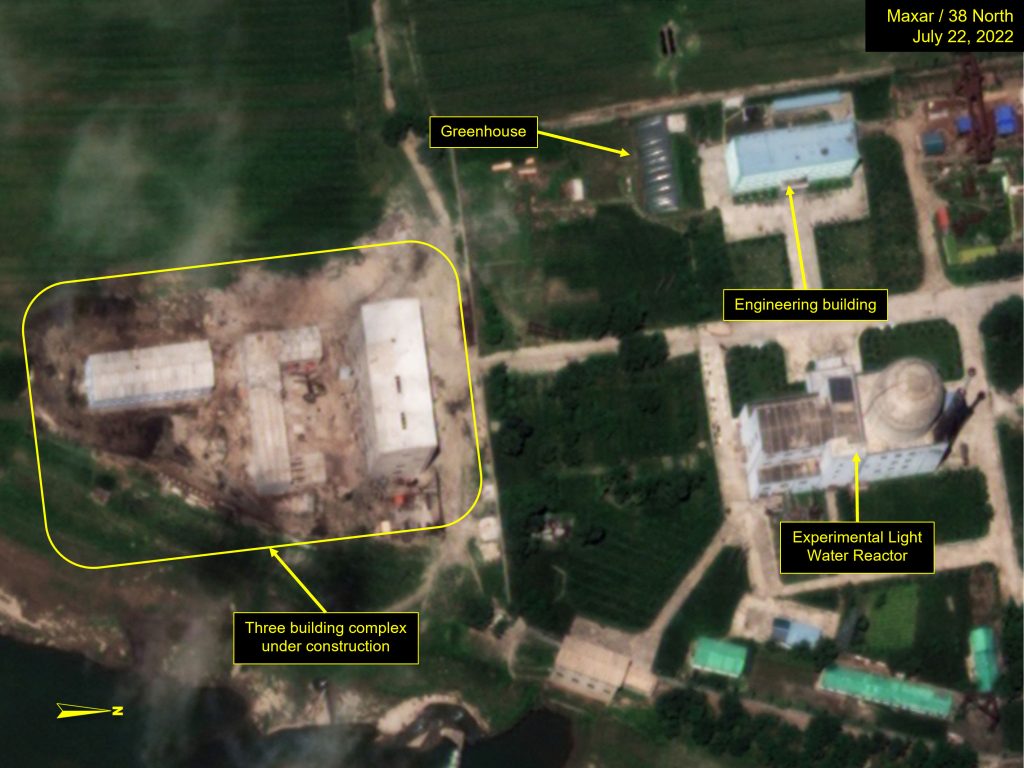 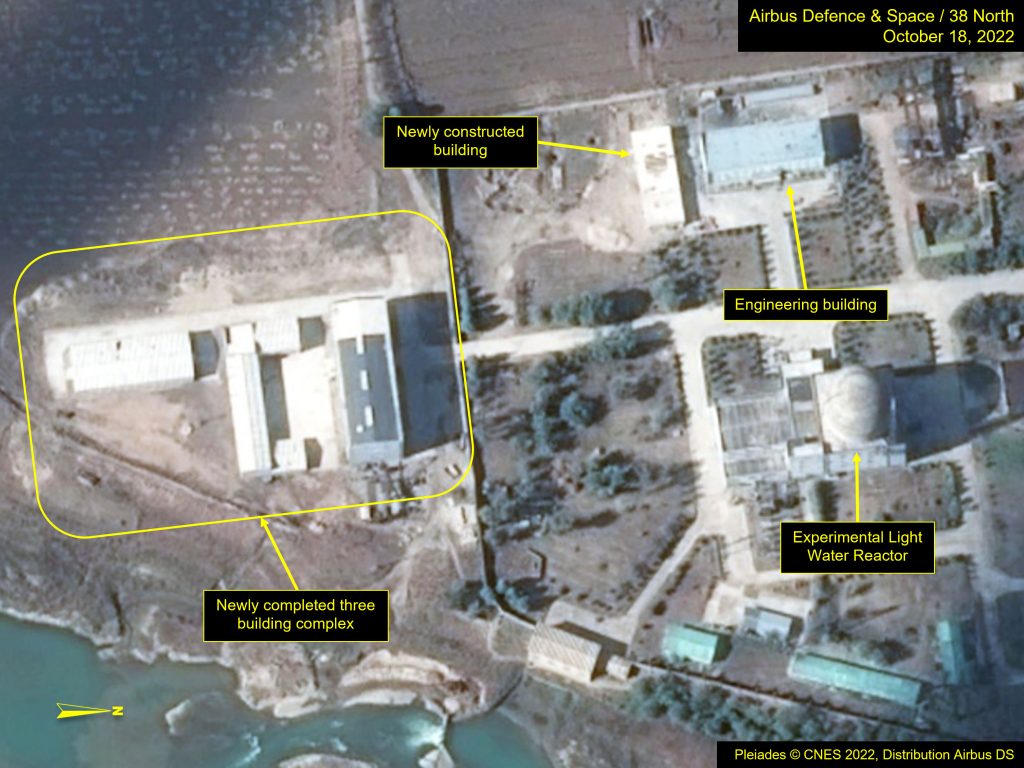 Around the Main Research and Administrative Headquarters Area, the roof has been added to the new wing of one of the research buildings. This expansion project has spanned more than two years but appears now complete.