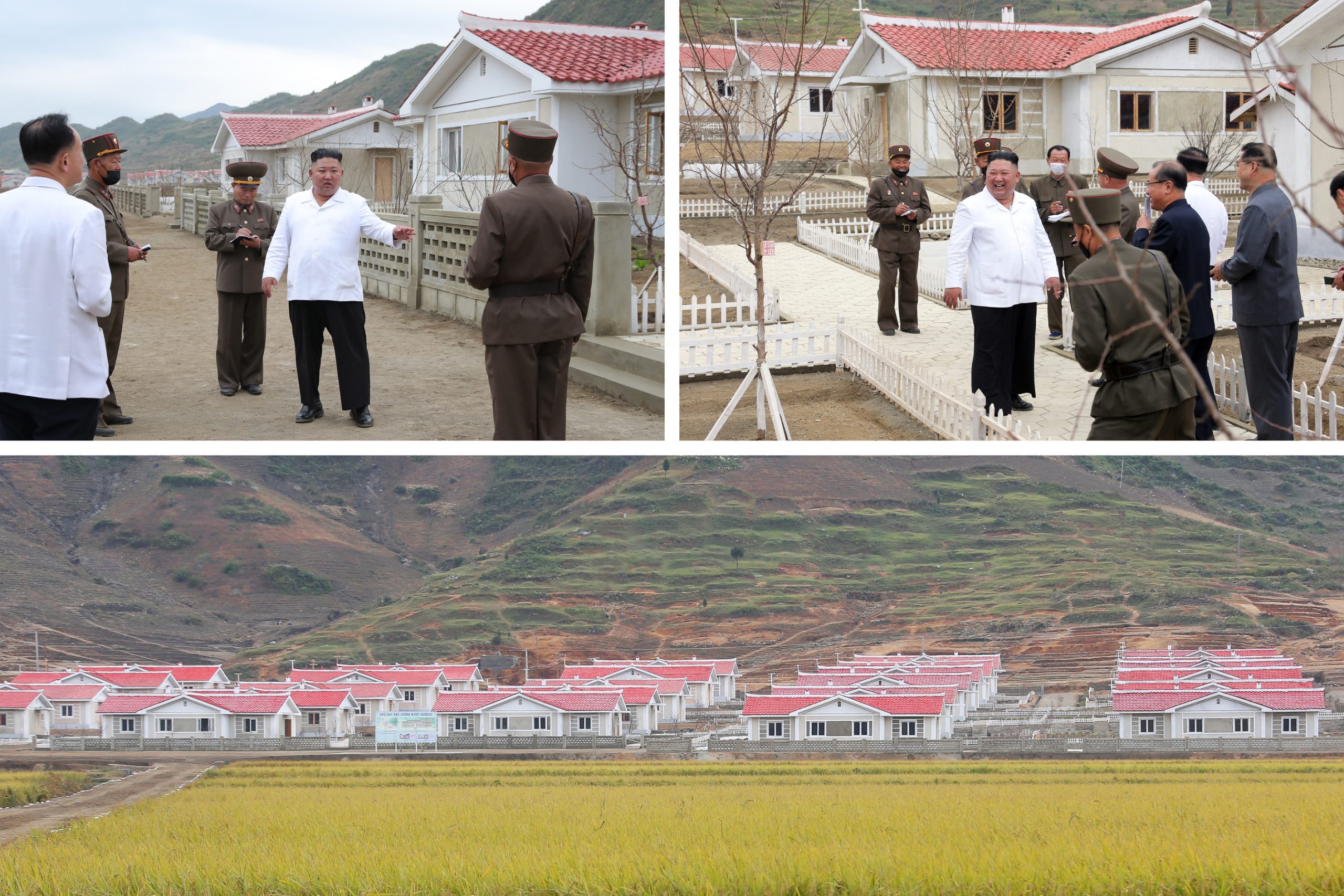 Upon arriving he was greeted by the head of the country Party committee, a Vice Minister of the People’s Armed Forces and KPA commanders mobilized for construction work.  Kim Jong Un looked at the construction work and learned “in detail about damage to dwelling houses, to farm land, to the transport system, land and environment, city management, power field, and telecommunications in the area about progress in the recovery.”  He said that the “People’s Army is making world-startling achievements under the energetic leadership and meticulous guidance of our Party” and that he was “greatly impressed by the patriotic deeds and revolutionary fighting stamina of the soldiers of the People’s Army who brought about another miraculous event in the wake of the recovery of Kangbuk-ri, Ku’mch’o’n County…such results brought about the People’s Army is the spiritual wealth most valued by our Party, before simple material creation.” 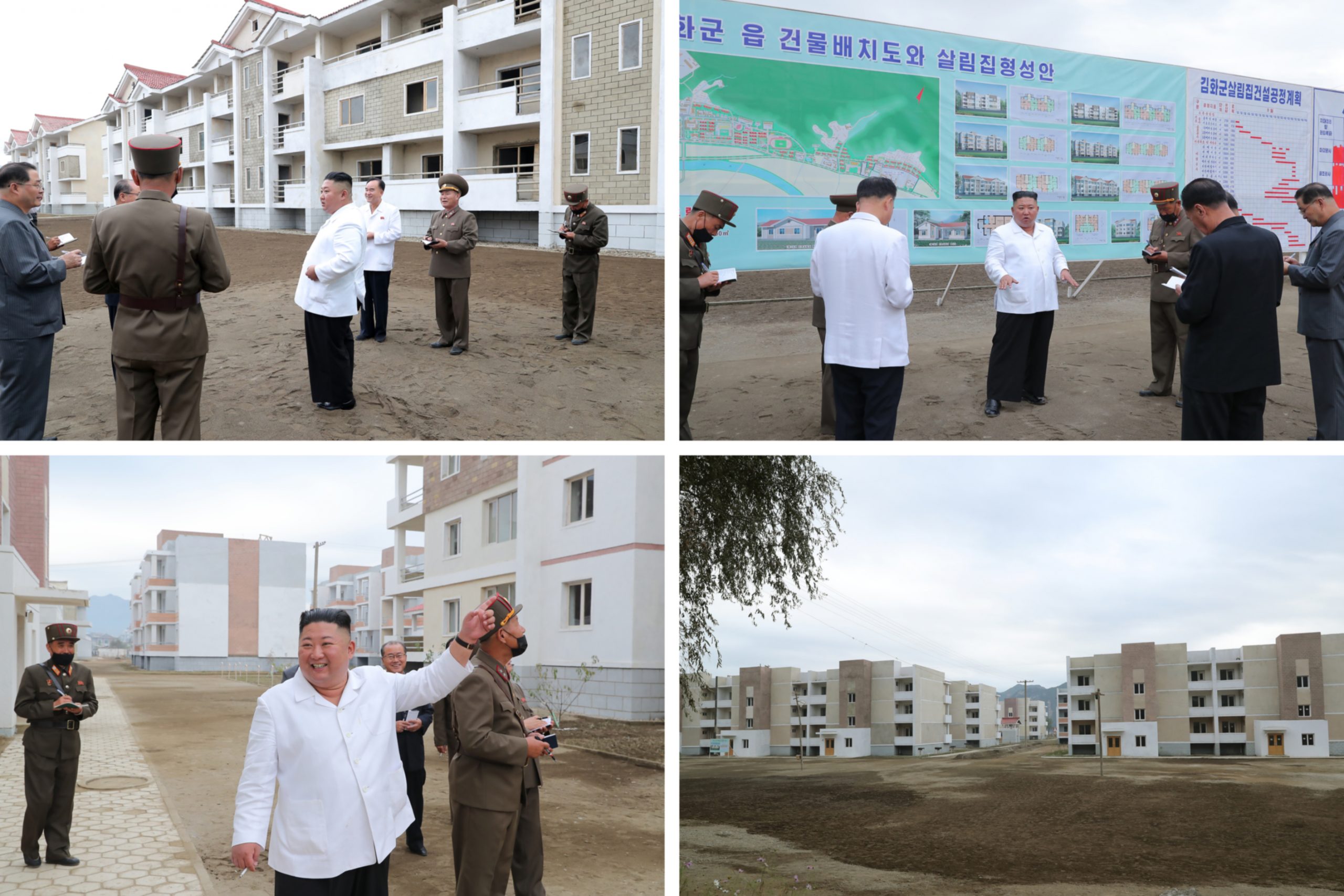 The Suryo’ng had things to say.

Kim Jong Un said that “the noble mental and moral traits of the People’s Army by which it displays indefatigable mental power with firm resolution to go through, thick and thin, without the slightest vacillation and hesitation despite whatever disaster and hardships if they are for the sake of our Party, the people and the prosperity of the country, and creates a thing out of nothing and turns a misfortune into a blessing are the key secret to the creation of all miracles on this land.”  Jong Un “repeatedly asked the chairman of the county Party committee if the people of the county were pleased.”  After being told they were happy, Kim Jong Un said that he “had nothing more to wish.  Nothing will be pleasing and more worthwhile a struggle if people take their happy lives in modern dwelling houses suited to the ideal and highly civilized society as planned by the Party, after shaking off backwardness.”

KJU was “told by the chairman of the country Party committee and the commanding officers of the construction units that watching the wonderful dwelling houses being built in a lightening-speed despite difficulties and hardships, under the measures taken by the Party, the people in the area said that houses are built faster than meals being cooked and they were so happy to have houses strong enough to withstand any disasters.”  The Suryo’ng said he had been “encouraged by the frank and unreserved feedback of the people and added that the houses should be evaluated by the people” and stressed “the whole process of the reconstruction ranging from designing and construction should be carried out from the viewpoint and on the principle of putting the people above all and respecting the people.” 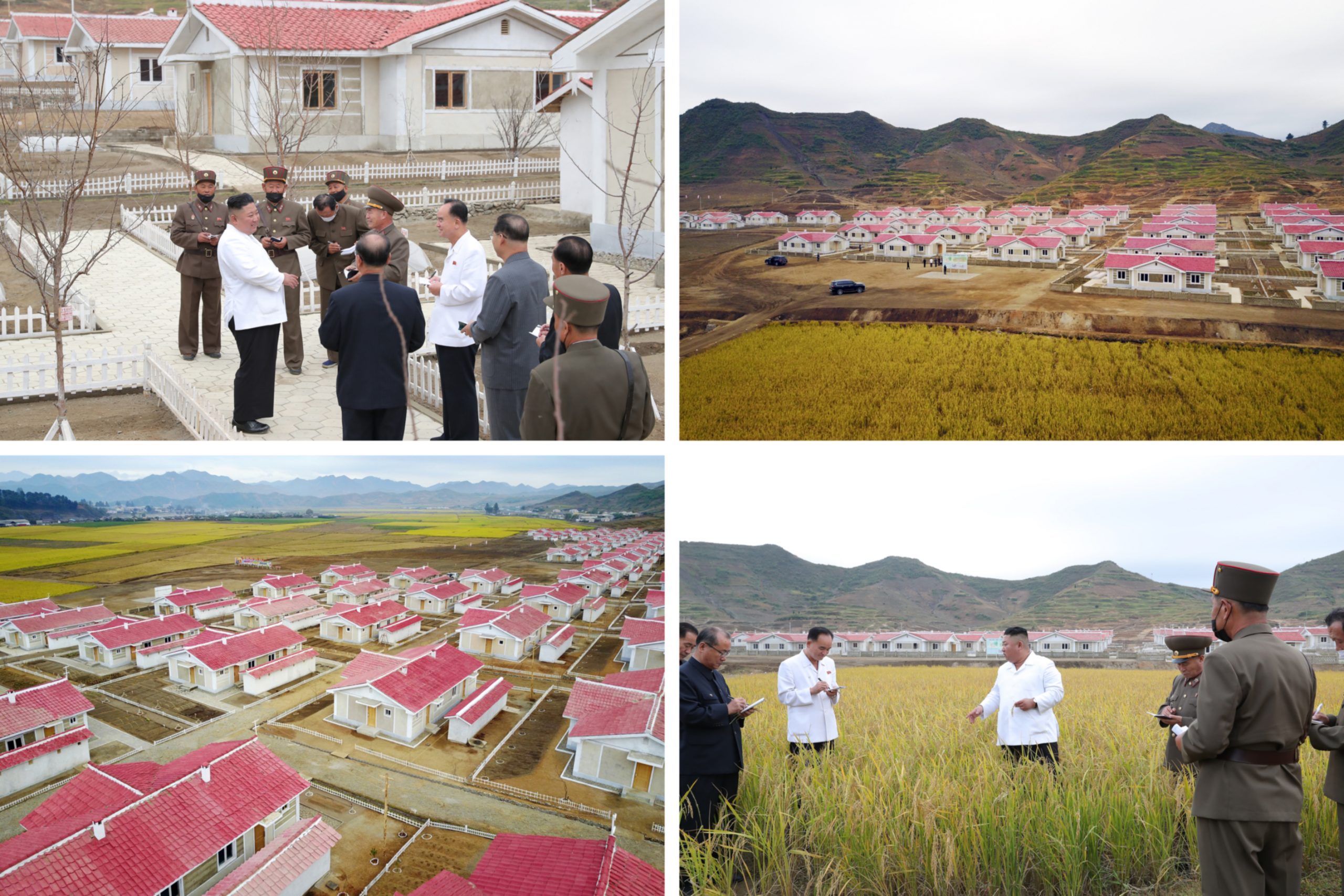 Kim Jong Un said that “one thing he regretted while watching the houses built in the areas hard hit by disaster is that the designs of all the houses were monotonous.”  He wished the house designs “had been given peculiarity on the principle of meeting the advantageous cultural and regional characteristics of the areas and meeting the people’s conveniences and demand, and artistic harmony with the surrounding environment and diversity had been appropriately combined.”  Jong Un mentioned “some things that should be guarded against and be overcome in the construction field.”  He gave “detailed teachings about the key idea of the construction policy of our Party.”

Kim Jong Un “made particular mention to plant more trees in the township and mountains around it and to plan more land-creeping plants in the residential area so as to further improve the natural and ecological environment in the areas” and stressed that “local industries should be modernized on a yearly basis and production should be vitalized to improve the economic life of the country and steadily increase the standard of material living of the people.”  The Suryo’ng “repeatedly, highly praised the People’s Army for making tremendous contribution to the socialist local construction which has embodied the demand and hope of the working masses.  Soldier-builders should bear deep in mind that architecture is the epitome of the height of ideology and culture in which the height of the ideology and civilization of the times is intuitively reflected.” 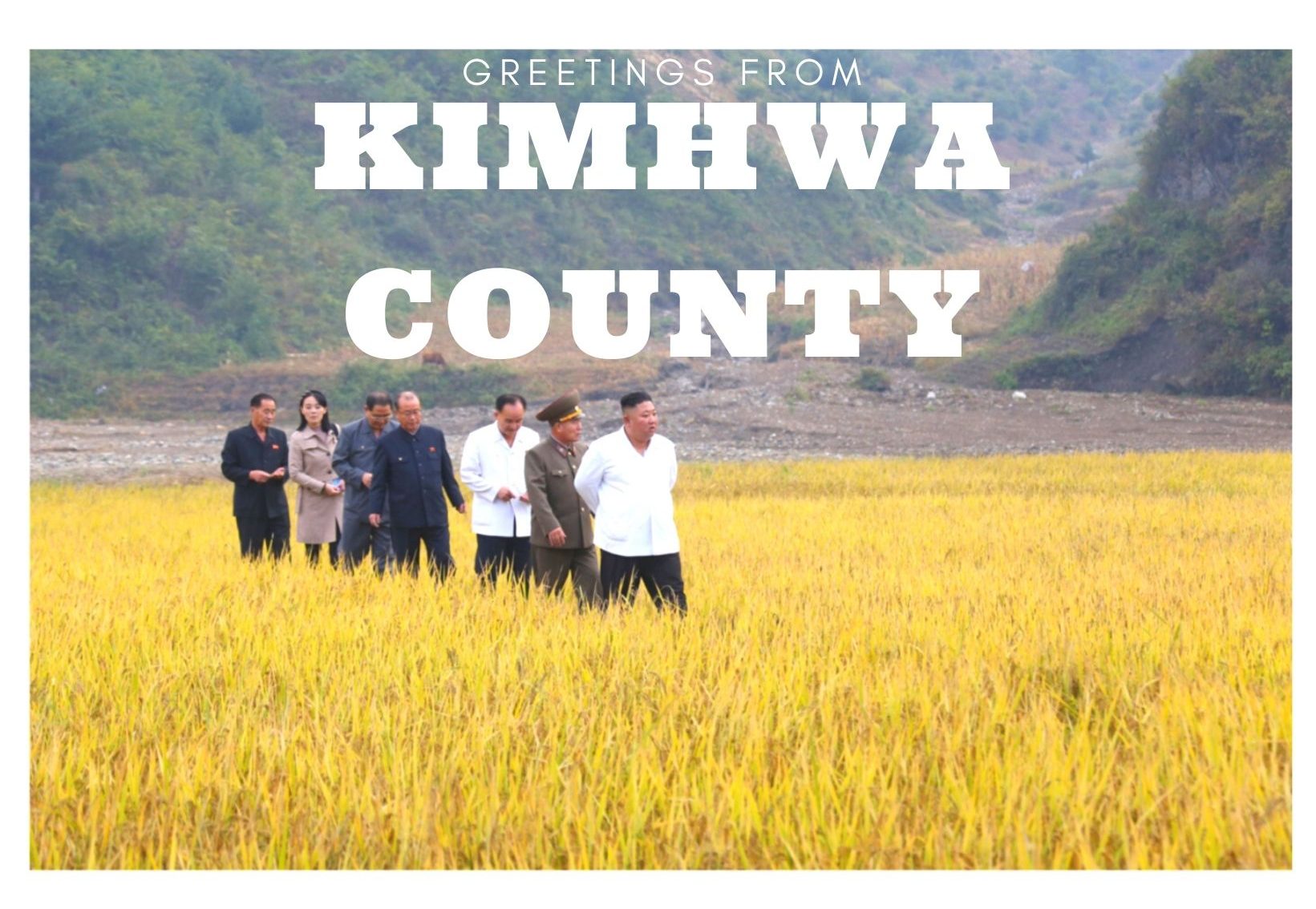 Jong Un “asked them to display staunch fighting spirit and stamina with immense loyalty and filial devotion for the Party and the people and present great pleasure to the people by wonderfully and quickly building standard and modern dwelling houses preserving the local peculiarity of high civilization desired by our Party and the State with the same sincerity with which they would build their own houses.” 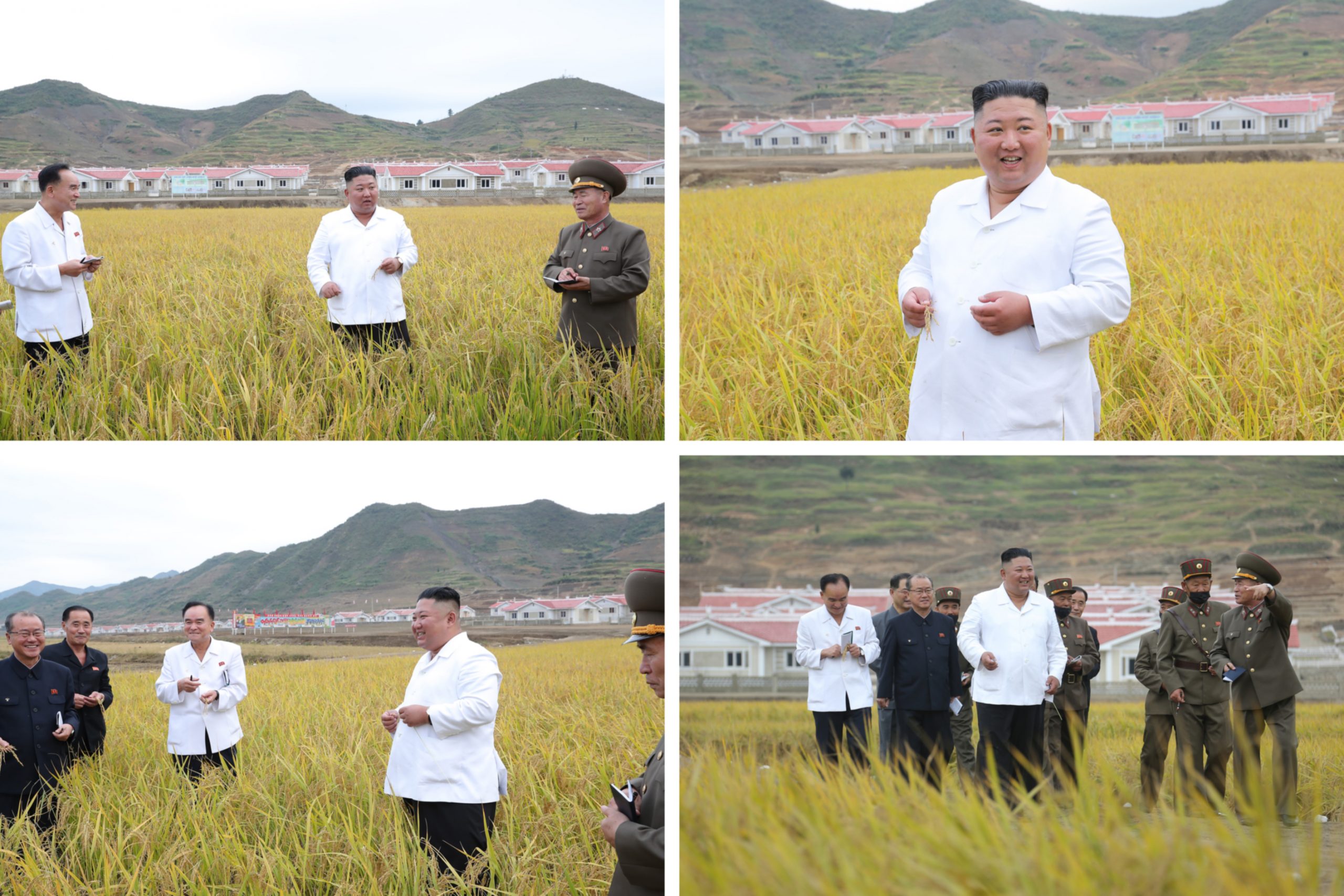 Kim Jong Un also stopped in at agricultural units and “learned about farming.”  He said that “good crops are expected unlike the time when fields were damaged by flood” and that “clear traces of having overcome from flood can be seen in all plots.”  He said “thanks to the devotion and patriotic sweat and efforts made by farmers for each plant, such a result could be possible despite damage, before highly appreciating the agricultural workers for thir efforts to preserve valuable crops to the last.”

He said that “even though the wildness of nature swept away a lot of things in a moment, the damaged areas have been face-lifted with the construction of new wonderful houses and damage to crops has been minimized to have promising crop yields not less than that in the year of the highest yield” and he stressed “with confidence that this year has been one of unprecedented hardships but it will be a year of great victory with particularly a great worth of struggle. The present hardships have never discouraged us but made us get stronger and make further progress and let us know how loyal, patriotic and strong our people are.”  He noted that he was “greatly emboldened by such loyal people and feels again that there are no insurmountable difficulties.”

Kim Jong Un’s prior observed appearance was his attendance and chairing of the 18th meeting of the Political Bureau of the KWP’s 7th Central Committee on 29 September (Tuesday). 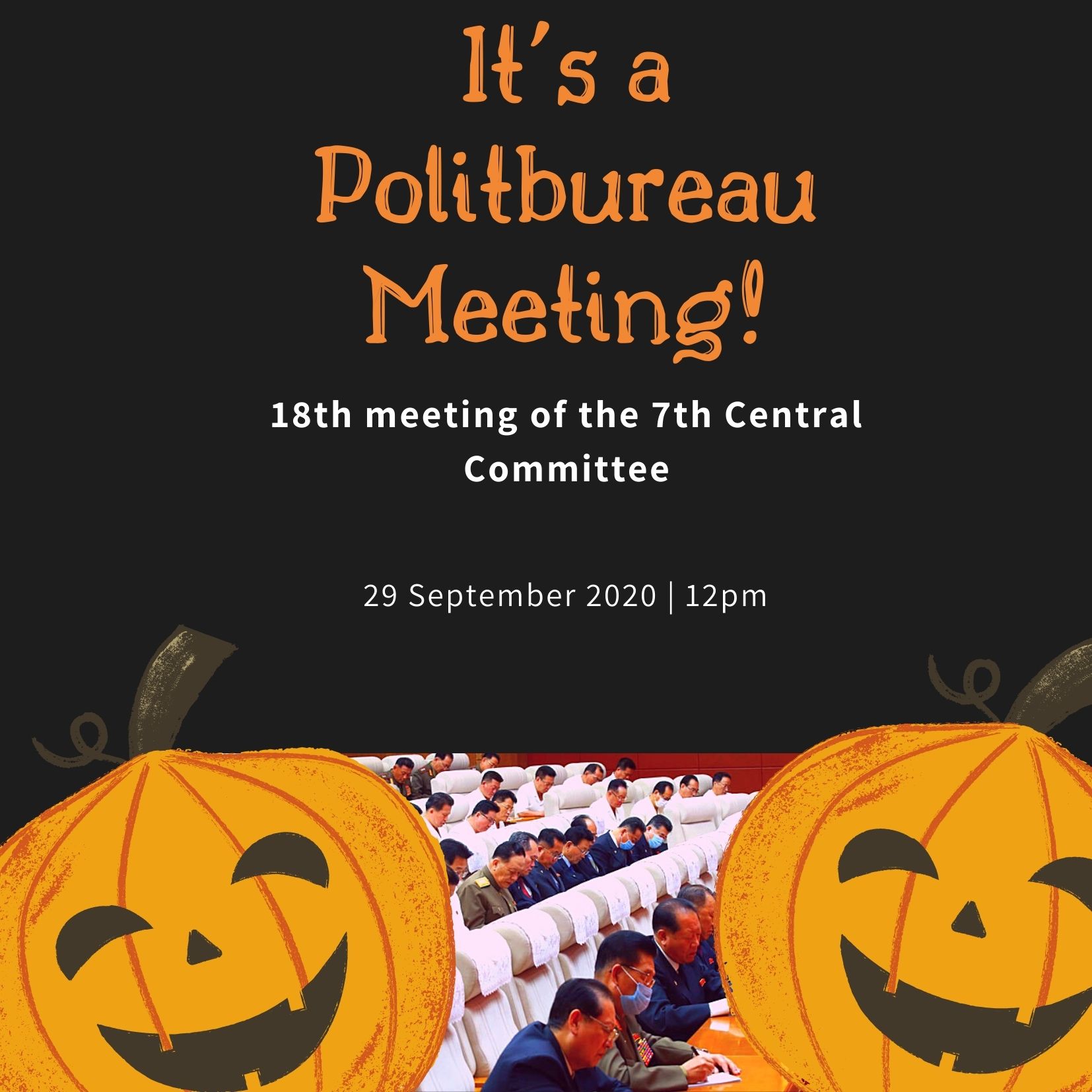 Marching into the second floor conference room at the Central Committee’s headquarters building were members and alternate (candidate) members of the Political Bureau, CC Department Directors, members of the state anti-epidemic outfit and other senior cadres.

The meeting “pointed out some faults found in preventing the inroads of the malignant virus and had an in-depth study and discussion about the issues of further intensifying the state emergency anti-epidemic work.”  A report about COVID-19 and its effects in the rest of the world was read out. 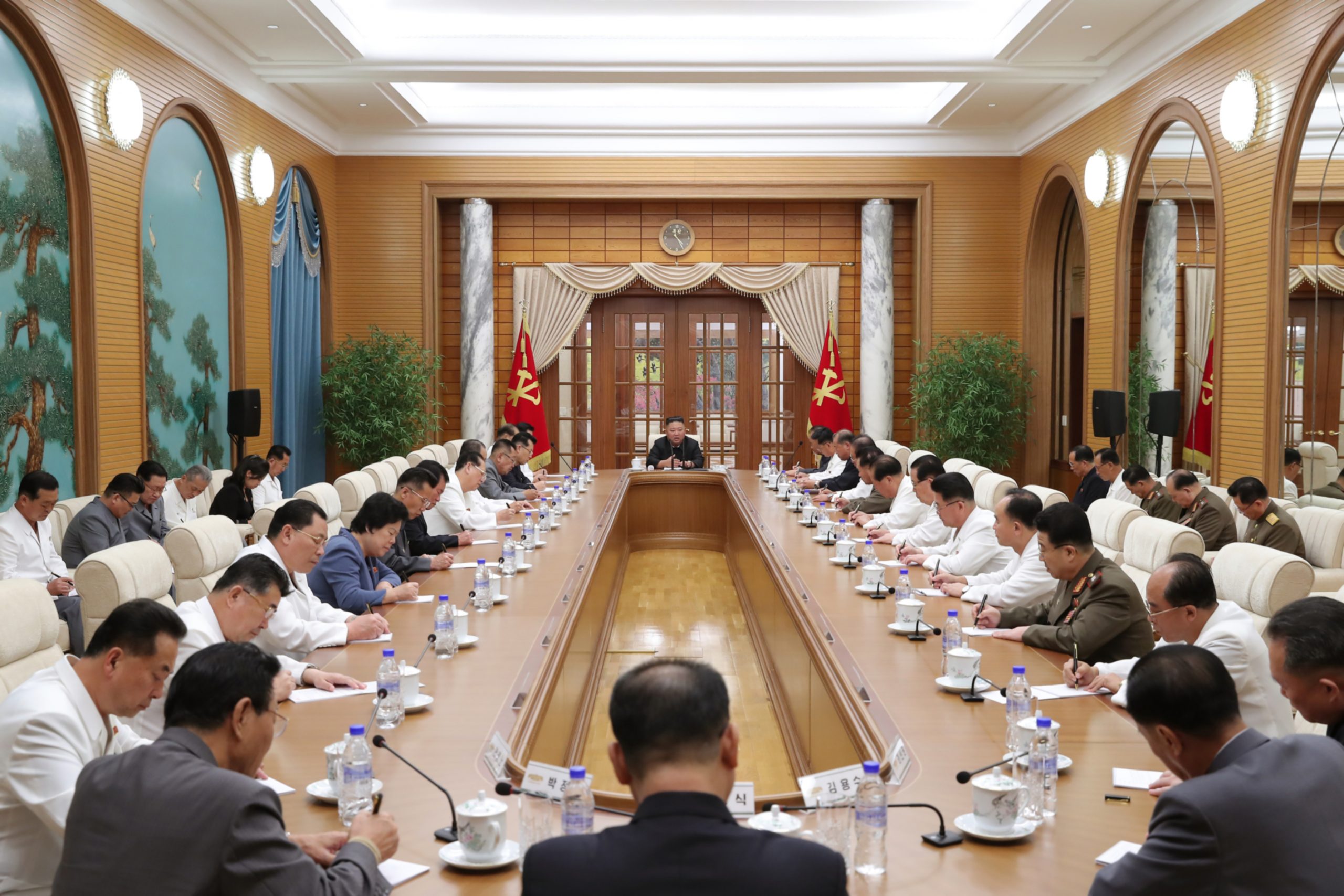 The meeting “stressed the need to strictly guard against self-complacency, carelessness, irresponsibility and slackness in the anti-epidemic field and employ home-grown style and wisdom to further toughen anti-epidemic measures” and called “for successfully maintaining a steel-strong anti-epidemic system and order by revving up the mass-based anti-epidemic atmosphere and intensifying the all-people unity of voluntary action.” 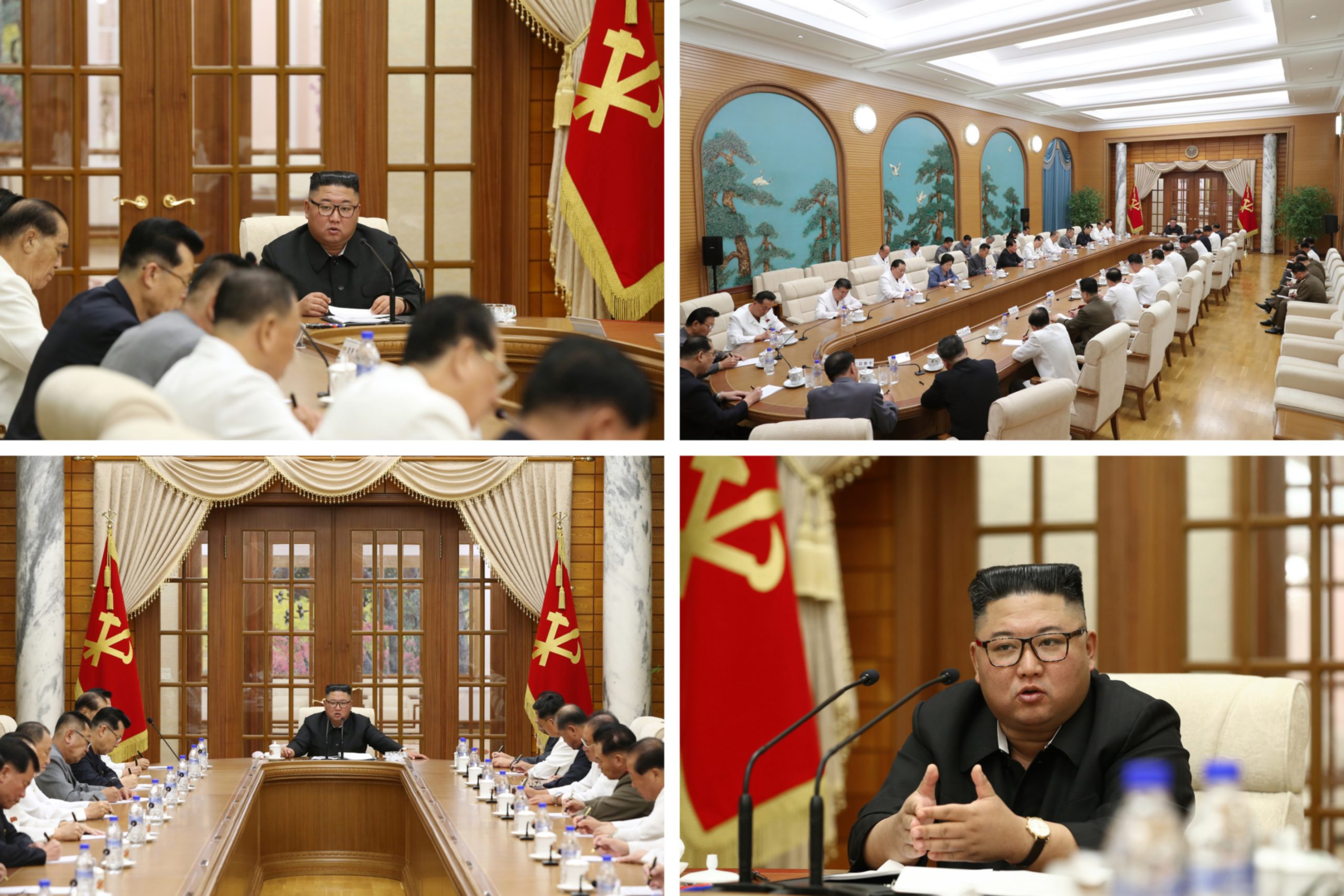 The Political Bureau “examined the Party and state works, which have been conducted on the occasion of the 75th founding anniversary of the Party, and the progress made in the campaign for recovery from natural disasters, before proposing, discussing and determining due organizational steps for ensuring their successful implementation.”  The 18th Political Bureau meeting of the 7th KWP Central Committee “marked an important occasion in devotedly protecting the security of the country and the people and stabilizing and improving their living standard as it took practical measures to celebrate the 75th founding anniversary of the Party as a genuine and auspicious holiday of the people and successfully conclude the campaign this years, the last year of the 5-year strategy for national economic development, despite the unprecedented crisis and natural disasters.”