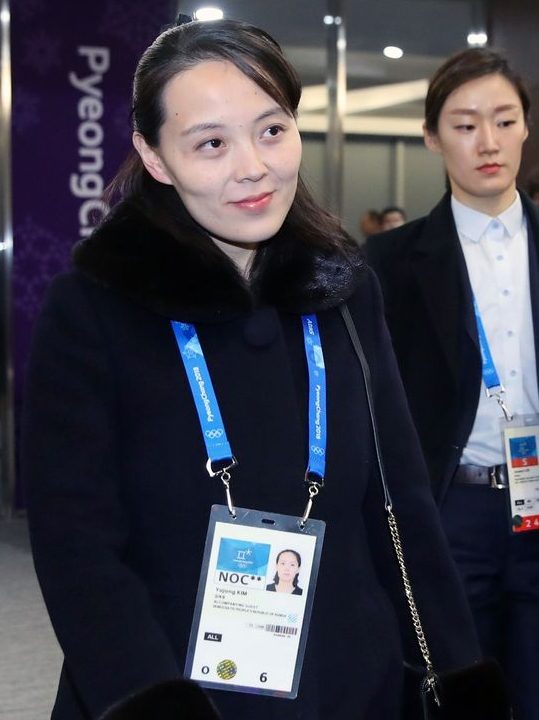 KYJ’s communique has some interesting tidbits.  As a response to the US-ROK exercises, Kim Yo Jong threaten to decommission the Committee for the Peaceful Reunification of the County (formerly known as the Committee for the Peaceful Reunification of the Fatherland) and to shutter the Kumgangsan International Travel “and other organizations concerned as any cooperation and exchange with the south Korean authorities antagonizing us are no longer necessary.”  In a “wait ’til your father gets home” vein, Kim Yo Jong also states that these measures (“crucial steps”) have already “been reported to the supreme leadership (KJU).”

According to KCNA, Kim Yo Jong said:

I heard the news that the south Korean authorities, who had long been suffering from stress in a fix, launched a war game against our Republic on Mar. 8.

In other words, they dared to send us a serious challenge. It seems as if they are capable of dealing with the consequences to be entailed by the war drill started despite our entirely just demand and all the fellow countrymen’s unanimous protest and condemnation.

Our Party Central Committee has already clarified the stand that whether the inter-Korean relations return to the new starting point of peace and prosperity as witnessed in those spring days three years ago or not depends on the attitude of the south Korean authorities.

Everyone knows that it pointed to the hysteria for war drills manifested in the south every March and every August, and served as a meaningful warning that it might become the last chance for repairing the north-south relations.

The south Korean authorities, accustomed to paying lip-service, are busy billing the drill as “annual” and “defensive one” and a computer-based simulation drill, as in the past. They say that the drill involves no actual maneuvers with its scale and contents drastically “reduced”. Perhaps, they are expecting “flexible judgment” and “understanding” from us but it is, indeed, ridiculous, impudent and stupid.

It seems that they were all born with stupidity and have become the dumb and deaf bereft of judgment as they always sit on the fence. Anyhow, we cannot but take note of this.

We have opposed the joint military drills targeting the compatriots but never argued about their scale or form.

It is because the essence and nature of the drills against the compatriots in the north never change despite any change in their forms – whether they are staged behind the scene or they poorly involve only 50 or 100 persons due to widespread malignant epidemic.

They are not ashamed of remaining ignorant of the fact that we are not taken in by their nonsense coating mad dog with sheepskin.

To be frank, we feel sorry about the plight of the south Korean authorities as they are to stake their lot on hostile acts against the compatriots even by resorting to shrunken war games, now that they find themselves in the quagmire of political, economic and epidemic crisis.

Perhaps, their persecution mania resulting from abnormal hostility and distrust toward us has reached the extremes.

They staged 110 big or small war drills in 2018, more than 190 in 2019 and over 170 in 2020 for so-and-so reasons in breach of their promise to halt such drills. We have long been aware of it and are ready to make them pay dearly for it at an appropriate time.

They might know better than anyone else about what impact such continued north-targeted war drumbeats would have on the north-south relations.

We have stressed it several times and offered ample opportunity to them, exercising patience.

Nevertheless, they opted for “war in March” and “crisis in March” again under the eyes of all Koreans, instead of “warmth in March”.

They are about to bring a biting wind, not warm wind expected by all, in the spring days of March.

The south Korean authorities should realize that they have chosen a wrong deed of crossing the “red line” by themselves though they also don’t like to do so.

Their idea of seeking confrontation with the compatriots in the north and hostile behavior toward the latter, which festered to be a chronic disease, have reached an incurable state. It is the conclusion drawn by us once again that we have nothing to talk with them.

War drill and hostility can never go with dialogue and cooperation.

Given the current situation that the south Korean authorities persist in hostile acts of denying dialogue and completely destroy the foundation of trust through ceaseless war games, we cannot but put on the agenda the issue of the Committee for the Peaceful Reunification of the Country, an organization for dialogue with the south which has no reason for its existence.

We also examine the issue of dissolving the Kumgangsan International Tourism Bureau and other organizations concerned as any cooperation and exchange with the south Korean authorities antagonizing us are no longer necessary.

Such crucial steps have already been reported to our supreme leadership.

We will watch the future attitude and actions of the south Korean authorities. And if they dare resort to more provocative acts, we may take a special measure of resolutely abrogating even the north-south military agreement.

Every action has its own result.

One thing is clear. The south Korean authorities with just some months left in their term of office may find themselves in extreme uneasiness, for the grave challenging act.

As clarified at our historic 8th Party Congress, they will receive as much as they have tried and paid.

We take this opportunity to warn the new U.S. administration trying hard to give off powder smell in our land.

If it wants to sleep in peace for coming four years, it had better refrain from causing a stink at its first step.

Whatever and however the south Korean authorities may do in the future under their master’s instructions, those warm spring days three years ago, which they desire so much, won’t come easily again.