On February 2, KCTV broadcast from inside a home on Mirae Scientist Street. You can see the video here at 5:07:38 if you subscribe to NK News. Inside the apartment, they showed where the resident had been photographed with Kim Jong-un and Kim Jong-il. Here are the photos on the wall: 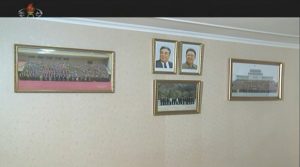 Here is a blow up of the lower-center picture:

Surprisingly, I recognized this picture. It is from Kim Jong-il’s and Kim Jong-un’s guidance trip to the Jagang Machine Plant on 2011-4-8. Here is the official photo as it appeared in the media at the time:

In this lower photo, the three individuals wearing grey coats are (from left to right) Jang Song-thaek, Kim Jong-un, and Kim Jong-il. In the photo above (hanging on the wall of the apartment on Mirae Street) there are only two people wearing grey coats: Kim Jong-il and KimJong-un. There is also one less person in the photo.