North Korea’s admission of a Covid-19 outbreak has understandably drawn global attention. It’s one of two countries – the other one being Eritrea – that have not yet started administering Covid-19 vaccines. North Korea also claimed, until just a few days ago, to have had zero cases of infections.

Naturally, the government’s data is highly interesting in this situation, and you can follow the officially reported numbers here at 38 North‘s tracker. Due to the lack of testing kits, North Korean authorities report cases of “fever” as a proxy for Covid-19.

These numbers perhaps tell us more about how the government perceives the situation, than how many North Koreans have actually been infected with Covid-19. That North Korean authorities are now signalling a greater level of pragmatism in tackling the virus does not mean their claims until a few days ago about zero cases were true. The zero cases claim defies common sense and logic, not least since North Korea borders Chinese provinces where we know there have been significant outbreaks. Outlets such as Daily NK, Rimjingang, Radio Free Asia and others with sources inside North Korea have reported since the start of the pandemic about large numbers of people coming down with Covid-19 symptoms.

Already in March 2020, shortly after the pandemic began, sources in North Korea told Daily NK that over 20 North Koreans had died from the virus. By November last year, Daily NK reported that more than 100,000 people with symptoms were housed in government quarantine facilities. These are only two examples out of a large number of such reports. There is of course no way to confirm any of the information about Covid outbreaks in North Korea. Most  reports, however, have used roughly the same metric as the government uses right now to count cases — fever symptoms.

North Korean state media reports of the number of people in treatment per province also raises a lot of questions. Consider the map below, from the 38 North tracker: 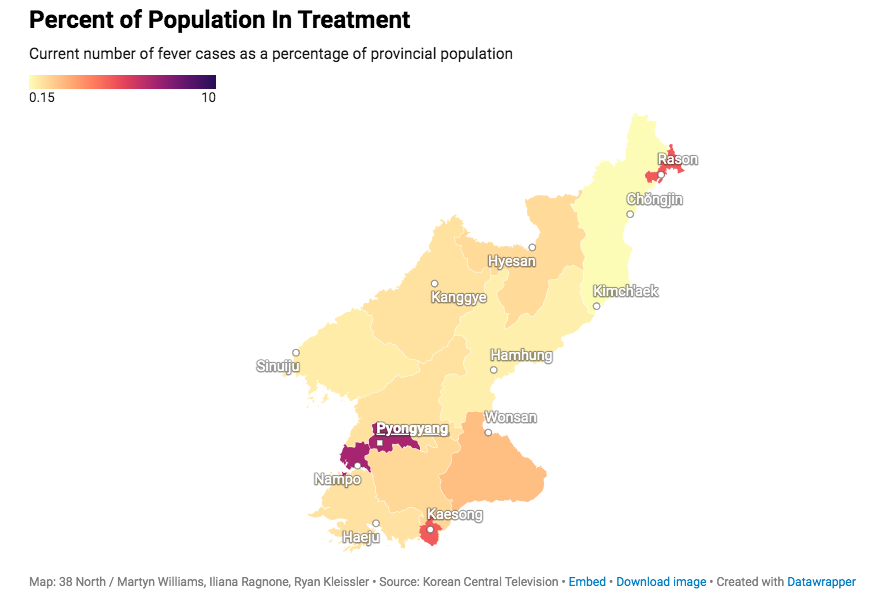 It is possible that Pyongyang and its surroundings, Kaesong, and Rason, all have significantly higher numbers of cases than, say, North Hamgyong province. After all, Pyongyang is a relatively crowded city by North Korean standards, making infections spread more easily. But these are also sensitive areas and it may well be that the government is simply paying more attention by testing (for fever) more and monitoring numbers more closely. All three, in fact, are so-called “administrative special cities” (특별시/t’ŭkpyŏlssi), placing them under more direct central government administration than other cities. Pyongyang, moreover, is politically sensitive as the country’s power center, and Kaesong sits on the tense border with South Korea. Rason holds a special economic zone and is close to North Korea’s borders with Russia and China. Perhaps the government pays greater attention to these cities because of this common denominator.

The question is still why the North Korean government chose to acknowledge the presence of Covid-19 in the country this month. Since the announcement, the state has strengthened quarantine measures, some of which were already in place, and imposed a nationwide lockdown, though there’s been some questions raised about how sternly it is implemented. It is still possible, as I noted in a previous post, that the government is changing to a more pragmatic Covid-19 policy overall, starting with recognizing the virus.

As of now few data points point in this direction, although it is still much too early to tell. It may also be that the government made the announcement to set the stage for accepting vaccines and other assistance from abroad. Even with such assistance, it remains unclear how the rollout would work in practice given North Korea’s lacking equipment for, for example, storing vaccines and keeping them cold while transported around the country.