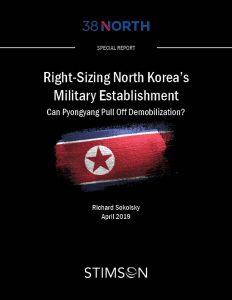 Kim Jong Un has used military personnel in the past to carry out civilian construction and infrastructure projects and in his 2019 New Year address, the North Korean leader mentioned the importance of the military in the country’s construction projects. Kim has also reportedly expressed his desire to reallocate resources from the military to the civilian sector, which could include future manpower reductions if North Korea decides that peace and security on the peninsula would allow it to downsize its conventional forces. Whether Pyongyang has the capacity and the resources, however, for large-scale demobilization and reintegration—and is prepared to implement market reforms that would be required to make the most efficient use of these resources—remains an open question. South Korea might be willing and able to help Pyongyang develop a viable plan to deactivate many of its troops and reintegrate them into the civilian economy, but a multilateral effort will likely be required depending on the scope and pace of the effort.