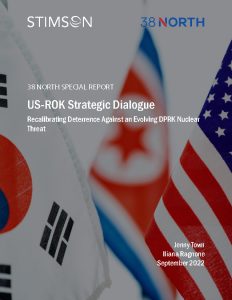 The nature of the Democratic People’s Republic of Korea’s (DPRK or North Korea) nuclear and missile capabilities has significantly evolved since the United States first established an extended deterrence arrangement with the Republic of Korea (ROK or South Korea). In 2017, the DPRK conducted its first intercontinental ballistic missile (ICBM) test launches, demonstrating limited success. This milestone fundamentally changed its strategic options, adding a new dimension to US and ROK deterrence calculations.

In March 2021, the Stimson Center’s 38 North Program, sponsored by DTRA’s Strategic Trends Research Initiative within the US Department of Defense, launched a year-long US-ROK bilateral Track 2 dialogue to consider ways in which the extended deterrence arrangement could be modified in the coming years and to assess the potential effectiveness of various measures in enhancing deterrence against a DPRK attack and providing reassurance to South Korea of the US commitment and ability to respond in the ROK’s defense in case of deterrence failure. Participants came from a diverse range of functional and regional expertise across a broad spectrum of political viewpoints and included both senior-level experts and emerging scholars with diverse backgrounds.

Throughout the dialogue, common threads emerged across US and ROK perspectives, highlighting the careful balance required to properly prepare for and address the issues at hand.

Discussions stressed an urgent need for improved strategic communications about alliance cooperation. There is little public understanding of the breadth of alliance cooperation and consultation that currently takes place, especially regarding extended deterrence. High-profile meetings between defense ministers or military leaders are reported on but do not convey a sense of deep cooperation when the cameras go dark. As tensions rise globally and US policy priorities adjust to world events, there is reassurance in increasing the visibility of working-level cooperation, demonstrating that the alliance is not just strong, but also adapting to the changing security environment.

The range of potential new ways conflict could unfold in the region due to evolving threats requires modifications to conventional weapons employment, war planning, and joint military exercises. Contingency planning for the use of tactical nuclear weapons, cyber attacks on military or civilian facilities, or even the potential for North Korea to initiate an attack amid other conflict in the region all pose complications for allied responses. Planning, practice and especially exercising to failure can help identify operational and command and control challenges for the alliance to prepare for any threats.

Finally, the change in administration in Seoul provides new opportunities to deepen and strengthen alliance cooperation and potentially trilateral US-ROK-Japan security cooperation as well. However, in the current strategic environment, China will likely view moves to deepen regional cooperation and integration among US allies with great suspicion. Knowing Beijing is able and willing to use its economic and political power to impose hardships on Seoul—and other allies that engage in major trade with China—over alliance defense decisions, the United States, South Korea and other allies should develop a collective response strategy to help mitigate the effects of Chinese economic coercion.

Build a comprehensive and coordinated strategic communications strategy that engages stakeholders and the public in more frequent and specific ways surrounding alliance cooperation, coordination and its evolution to build greater confidence that the alliance is adapting to the changing conditions. This means creating greater visibility into the consultative process, cultivating a more-informed press corps about the various ways in which consultation and cooperation are ongoing and coordinating messaging between Washington and Seoul to avoid the appearance of cleavages in policy positions that can be exploited.

Increase working-level cooperation in the consultative process to help promote the institutionalization of knowledge. While high-level engagements are important for agenda setting and demonstrating the commitment of both sides to mutual defense, a greater emphasis is needed on working-level cooperation. Creating joint studies and allowing more flexible execution of meetings can help facilitate greater learning and exchange and feed recommendations into the higher-level meetings to maximize their utility.

Inject new and realistic scenarios into US-ROK joint military exercises and tabletop exercises (TTXs) to help identify vulnerabilities and areas needing improvement. Wargaming and exercising to failure on both North Korea-specific and broader regional conflict scenarios can reveal where current capabilities and protocols need to be bolstered to be better prepared for conflict and a range of contingencies.

Build an alliance support and response strategy in the case of Chinese economic coercion that utilizes all aspects of state power and galvanizes a collective response among like-minded states. As US-China competition intensifies, China is likely to view changes to the US-ROK alliance posture and deployments with great suspicion and react in a similar, if not a more pronounced, manner. A coordinated alliance response plan may help to prevent coercive actions from being exercised or can at least mitigate their effects.

Build greater trilateral security between the United States, South Korea and Japan to enhance deterrence, recognizing there will be limits to this cooperation in the long run. Focus on areas where trilateral cooperation is imperative to extended deterrence and facilitate high-level dialogue, as well as within Track 2 circles, to build broader support for sustained security cooperation regardless of shifting political dynamics.