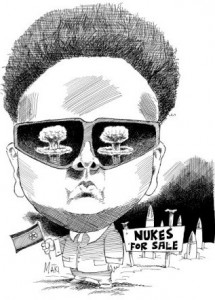 Senior U.S. government officials maintain that North Korea is willing to sell its nuclear technology anywhere in the world for money. While the evidence is ambiguous, a careful examination suggests that many past transfers were actually done not for profit but in exchange for components or materials that benefited Pyongyang’s own nuclear program. Barter appears to be an overlooked but important mode of exploiting nuclear black markets.

Future transactions may involve both forms of exchange: sales and barter. For Arab states striving to match Iran’s nuclear capabilities, and possibly other countries as well, North Korea will be attractive as a seller of plutonium-related technology—even if the export of an actual reactor has become unlikely. Meanwhile, there is a “double coincidence of need” between North Korea and Iran that creates incentives for a swap. For the Iranians, North Korea is a potential source of uranium, whereas for the North Koreans, Iran is a center of expertise in uranium enrichment.

The consequences of unchecked North Korean nuclear exports are dire, regardless of their exact form. No current strategy is adequate to stop them. Successful interdictions have involved a great deal of luck, and waiting for the North Korean regime to collapse has simply not worked. The United States’ best strategy is to try to negotiate North Korea out of the nuclear black market entirely, although this approach hardly guarantees success either.