The following is an exclusive 38 North interview with Daniel Gordon, producer and director at VeryMuchSo Productions, and director of The Game of Their Lives, A State of Mind, and Crossing the Line.

We would like to extend our sincerest thanks to Mr. Gordon for taking the time to email us his responses. His North Korea documentary trilogy has recently been released as a box set, and more information can be found at www.verymuchso.co.uk. Additional articles and papers on North Korea documentaries can also be found at 38north.org and the U.S.-Korea Institute at SAIS working paper series.

How did you come to make not only one, but three documentaries on North Korea?

Daniel Gordon: I never set out to make three documentaries in North Korea, it just evolved. My only intention was to make The Game of Their Lives, which initially was a 60 minute film for TV, but became something much bigger. Once we made that first film, funding was easier for films two and three. And with every film we made, cooperation in North Korea was easier, if there could be such a thing!

Is there an overarching theme to the three films?

DG: Not really. If I was to stick my neck out, then I feel they do humanize rather than demonize. All my films, not just the North Korea ones, take non-judgmental approaches to complex issues. I like to think the audience is intelligent enough to make up their own minds without having to hold my hand or have my views imposed on them.

What do you think the role of the filmmaker is in representing other cultures?

DG: There’s no one answer to that, but I feel it’s important to know where they’re coming from, what their world view is, and how have they come to that? In my films, you find this out through the storyline and through characters you come to care about. For example, in The Game of Their Lives, we learn from the footballers’ perspectives how they came from a nation whose infrastructure had been decimated in war to compete at the World Cup just 13 years later. In A State of Mind, we learn why the grandparents hate the Americans—because they witnessed the planes that wrought such devastation; and so forth.

Is it possible to make a film that doesn’t, in some sense, take sides? How can you ameliorate this situation?

DG: I feel I don’t take sides, and you know you’re doing something right when people from both extremes complain that you favor the other one too much! For me, I generally set the scene, let the film play out, and let the audience decide. If they take from it something different than my personal view, that’s fine.

How do you deal with events that you suspect would not take place had the camera not been present? (This isn’t endemic to North Korea, of course, the camera always changes things.)

DG: By and large, I’m confident that much of the stuff we shot in North Korea was accurate, and reflected society in Pyongyang. This has been confirmed to us by trusted sources in and out of the DPRK and also by defectors who say it’s an accurate portrayal of life in Pyongyang (not life outside Pyongyang, but we never make that claim). We shot so much stuff that we could weed out what we suspected was being played to the camera. For A State of Mind, in particular, the apartments were so small that, by and large, the cameraman and I were left to our own devices. We filmed observationally for hours on end, only finding out later what was said or how scenes could play out in the film. That was a major advantage for us in that we didn’t go back and forth with questions and interpreters; we just sat there and watched. After a while, you do become invisible.

Given that most people—even absent a gaping cultural divide—struggle to “act natural” on camera, how did you try to get North Koreans to do just that?

DG: The North Koreans don’t really know the moving image that well in terms of personal stuff. Of course, they see propaganda films all the time, but that is done with actors and in a certain style. They obviously don’t have reality TV or anything like that. (A shame really, as “Pyongyang’s Got Talent” has a great ring to it.) Of course it took a bit of time and explaining to them that we really did just want them to be natural, but they got it fairly quickly. When the families came to the screening of A State of Mind at the Pyongyang Film Festival, it was the first time they had seen themselves on film. Very few people have their own cameras, camcorders, and such, so for them, it was amazing to see themselves like this. 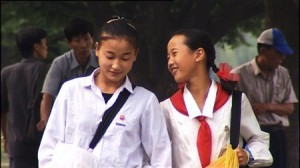 One thing that comes through in A State of Mind is the normalcy of day-to-day life, even as it’s embedded in a vastly different culture. To what extent did you intend/expect to show that?

DG: I did expect to show this, it’s something that struck me from the first time I visited. Yes, there are obvious differences, and yes the culture is as far removed from the UK as you could get. But underpinning it all, we are all people and we get on great if you put the political differences to one side. It’s something sport—and film—has the power to do.

Was Song Yun as charming in real life as she seems on camera?

DG: Absolutely. We all loved her. She’s now very grown up and the last I heard, she was training to be a chef!

Also in A State of Mind, there seems to be so much food in the family’s homes. Did you get the sense that this was put on at all?

DG: Often, especially at the beginning of filming, there was food provided for the filming crew as well, and due to time constraints, we had to film right there and then. So they piled the food on the table and there would be enough for a dozen, though only five would be filmed eating.

On closer inspection, there is not a great deal of food out—basic soup (with a minute amount of meat in there), a bit of beef wrapped in lettuce, some rice of course—certainly not the banquet it appears to be.

Throughout the year we often turned up unannounced and uninvited just to make sure things were not prepared for us in advance, and they went out of their way to give us food then too, very much in the hospitable fashion of the Koreans. I don’t know how much you have travelled, but certainly in my experience, the poorer people seem to be more generous in terms of hospitality.

The families learned to tone it down a bit the more we filmed, and I am sure the excess was paid for by the state film company, not by them personally. Also in the film, we do a shopping trip with one of the mums and she states how much chicken and eggs they receive per person/family per month. It’s hardly ostentatious.

Since our film trips for A State of Mind, both Nick [Bonner] and I have been in enough private homes to know that the type of food served in A State of Mind is typical of a normal Pyongyang household, even if the quantities shown were a touch excessive. 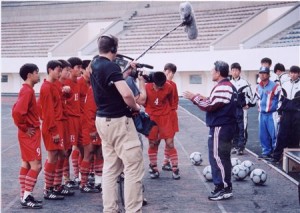 What surprised you the most about North Korea?

DG: The willingness of the people to take such risks for us to get the films made to our specification. And it never ceased to amaze me how many people had seen The Game of their Lives or how that success could still open doors for us many years later.

Were there challenges unique to shooting in North Korea?

DG: At the time I thought so, but as I’ve started to make films across the world, I’ve realized that most shooting problems are common across the board. I think the organizational nature of the Koreans (they love to know what they’re doing and when, each day, every day) was, in hindsight, a huge help rather than the hindrance it could have been. I like to keep things flexible, and they were happy to incorporate elements of flexibility in our shooting timetable. Years later, we found out we never actually had a permit to film in Pyongyang—they just winged it!

What were some challenges that were common with any production?

DG: See above—they are great at timekeeping; and many times in Uganda, I yearned for it!

What did you take away from these films?

DG: I wish I could say an overflowing bank balance! I think it just reinforced in me the belief that we are much closer than our differences suggest. If we could put more emphasis on sports rather than politics, then the world would be a much healthier place.

Do you think you’ll make any more films on the DPRK? If not, what’s next?

DG: I’ve no plans to make more films in DPRK, though I’d love to if the opportunity arose. I’m currently making a film for the BBC on Victoria Pendleton (British Olympic Cyclist) as she prepares for 2012 and also developing a couple more feature documentaries that I hope will go into production in the next six months—both with history and politics at their core!)

Daniel Gordon grew up a fan of Sheffield Wednesday and has written two books on his favorite team. He began his filmmaking career at Sky Sports and Chrysalis TV and formed VeryMuchSo in 2001. His debut feature film, The Game of Their Lives (2002), took him to North Korea for the first time to find the original members of their 1966 World Cup team. The film released to international acclaim, winning him the UK RTS award for Best Sports Documentary. Gordon’s second film, A State of Mind, again took him to North Korea where he followed two young gymnasts, aged 13 and 11, for nine months as they prepared for the Mass Games, the most elaborate human spectacle on earth. A State of Mind played at major festivals and theatrically throughout the world. Rotten Tomatoes ranked it the best reviewed theatrical doc of 2004. Crossing the Line (2006) marked the third and most ambitious film by Gordon to be set in North Korea—the story of Comrade Joe, the last American defector living in North Korea. He has since directed and produced two further feature docs—The Flapping Track (2007) which delves into the murky world of independent greyhound racing and The John Akii Bua Story, the gripping tale of the Ugandan hurdler whose gold medal win could not protect him from the clutches of Idi Amin.