Chairman Kim Jong Il traveled to China from May 20-27, 2011, his third visit in a year. He held talks with President Hu Jintao on political and security cooperation and with Premier Wen Jiabao on economic cooperation. Kim’s health seems to have recovered as demonstrated by the rigorous and tight schedule he kept, spending nights on the train en route to the next destination. 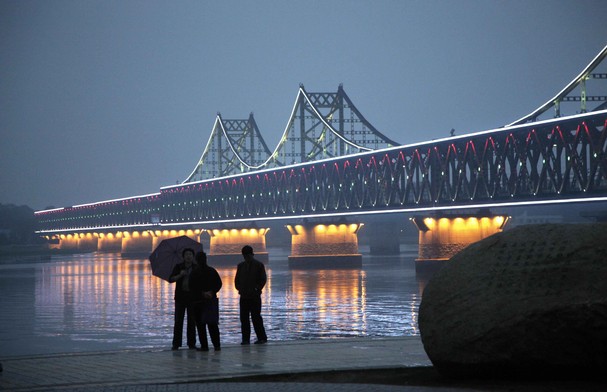 While his father was visiting China, Kim Jong Un, his successor, was in charge at home. This reminds us of the division of labor that was practiced throughout the 1980s and early 1990s between Kim Il Sung and his son Kim Jong Il. After Kim Jong Il was appointed his father’s successor, he became the co-ruler of the country. When his father made a one-and-a-half-month long visit to the Soviet Union and several East and Central European countries in 1984, Kim Jong Il was in charge at home. A thesis on power succession in North Korea makes clear that the successor enjoys “the same absolute authority and the same decisive roles” that the incumbent leader holds. Kim Jong Il’s travels overseas while his son is in charge at home signifies that “political stability” has been obtained in North Korea. If Kim Jong Un’s power had not been solidified, his father would not have gone to China. What does all this mean? It means that the era of Kim Jong Un has emerged in North Korea.

What were Kim Jong Il’s intentions and achievements when he visited China? And what were Hu Jintao’s calculations when he invited Kim? What does all this mean for the Korean peninsula and East Asian politics, and for the issues involving the United States?

First and foremost, North Korea and China have decided to double their economic cooperation at a time of mutual need. North Korea sought China’s cooperation in its economic development so that it could exploit Beijing’s experience in reform and opening. More concretely, North Korea wanted China’s help in developing the Rason Economic and Trade Zone (formerly Rajin-Sonbong) near the estuary of the Tumen River and the Hwanggumpyong Economic Zone (Sinuiju) at the estuary of the Yalu River.

The fact that Kim Jong Un has chosen the promotion of special economic zones as his own brand of economic development to help legitimate his power and rule, coupled with the fact that the North Korean leadership has promised to emerge a strong and prosperous state by next year—the one hundredth birth year of the late President Kim Il Sung—Kim Jong Il and Kim Jong Un are serious about securing China’s help. At the very minimum, Chinese assistance would allow the North Korean government to provide food and daily necessities for the people. This is why Kim Jong Il made clear in China that North Korea is now “concentrating its attention and resources on economic development” and that it is “in great need of a stable neighboring environment” for economic development.

Second, North Korea’s efforts to secure Chinese economic cooperation have been readily linked to and exploited by Beijing’s own economic development plans that also require North Korea’s cooperation for success. A key component of China’s plan to develop the Northeastern Provinces is the development of the Changjitu (Changchun-Jilin-Tumen) Regional Border Zone, which includes cross-border trade and economic cooperation with North Korea. The Rason and Hwanggumpyong economic zones are planned to be linked to the Changjitu and Changchun-Shenyang-Dalian/Dandong zones, respectively. Dandong, lying on the border between China and North Korea at the estuary of the Yalu River, has been designated as a major export production center in China’s Liaoning Province and is expected to fully exploit opportunities opened by Hwanggumpyong.

Third, in addition to economic cooperation, North Korea and China have decided to bolster cooperation on security issues, specifically with respect to the North Korean nuclear problem and the problem of “war and peace” in the Korean peninsula. Kim Jong Il, expressing appreciation towards China’s efforts to resume the Six-Party Talks and to safeguard peace and stability on the Korean peninsula, called for the early resumption of the Six-Party Talks. President Hu Jintao positively acknowledged North Korea’s efforts to ease tension on the Korean peninsula and to improve the external environment for peace and stability. Kim reiterated North Korea’s hopes to ease tensions on the peninsula, its promise to denuclearize, and its wish to see improvement in inter-Korean relations.

China has serious concerns about the danger of military conflict in Korea potentially escalating into war, as this would have negative implications for its own ambitions to catch up with and ultimately surpass the United States in terms of global leadership. As result, Beijing has decided to intervene in matters of war and peace on the Korean peninsula, especially after the Yeonpyeong Island shelling incident last November. China must have thought both Korean states had lost control over the situation. All these concerns were reflected in the joint statement of the Sino-U.S. Summit that was held in Washington, D.C. in January this year.

Fourth, the problem of war and peace in Korea has been closely connected to the North Korean nuclear issue. Pyongyang has previously used the nuclear card many times to bring the United States to the negotiation table to discuss ending the Korean War, signing a formal peace treaty, and normalizing relations with the United States for North Korea’s survival and development. North Korea has made it clear that the quid pro quo for denuclearization is none other than the establishment of a peace regime in Korea. It is noteworthy that North Korea has consistently prioritized the issue of peace regime in setting agendas for the negotiations with the United States, such as it did after conducting its second nuclear test in May 2009.

In November 2010, North Korea played a new kind of nuclear card—this time revealing a new uranium enrichment facility—to press the United States back to the negotiation table. It is also quite important to note that it did this while simultaneously planning an attack on South Korea’s Yeonpyeong Island. What does this mean? Pyongyang likely was seeking to negotiate the nuclear issue with the United States, but with establishing a peace settlement for the Korean peninsula as its key agenda. North Korea must have wanted to remind the world that military conflict and the danger of a war in Korea still persist and will continue to threaten the peninsula, as evidenced in Cheonan and Yeonpyeong Island incidents, until the United States agrees to end the Korean War, transforming the current armistice into a permanent peace regime. Ending the Korean War and securing peace in Korea have been key components of North Korea’s strategy for survival and development since the collapse of the Soviet Union in early 1990s. Kim Jong Il, wishing to hand over a better state of affairs to his son, discussed all these security and nuclear matters with Hu Jintao during this visit and offered an early resumption of the Korean nuclear talks.

Finally, it is important to understand North Korea’s concern over its growing dependence on China despite its need for Beijing’s help. Even though North Korea appears to have abandoned its “southern strategy,” meaning giving up seeking rapprochement with and help from the U.S., South Korea, and Japan, its desire to keep up independence looms large in the absence of any countervailing forces vis-à-vis China in play under the current international circumstances.

North Korea has benefited greatly in its efforts to keep its independence while trying to secure assistance from the Sino-Soviet rivalry in 1960s by playing both powers off against each other. It is no wonder that Kim Jong Il wants to improve U.S.-DPRK relations so that he can play off the U.S. and China against each other for the same strategic and economic reasons. If we understand North Korea’s sincere pursuit of a peace settlement, normalization of relations with the United States, and U.S. economic help in an effort to establish a framework for survival, as well as its desire to establish a strategic balance between relations with China and the United States, then the argument that the North has given up on the U.S. makes no sense. Nor does the assertion that North Korea has decided to keep its nuclear weapons program once and for all.

For North Korea, its nuclear weapons programs are mere policy instruments with which to achieve its fundamental national interests such as survival, prosperity, and prestige. We may have a very slim chance of denuclearizing North Korea right now, but Pyongyang’s nuclear resolve will depend more on what the United States will and will not do. Lack of trust between the two sides is clearly a stumbling block, but considering the magnitude of distrust and the history of nuclear negotiations in the past, we can only solve this problem only through a painful process of dialogue and negotiations

It is truly unfortunate that President Obama has failed to establish his political leadership in dealing with this highly political problem. The U.S. and North Korea are technically still at war. What is more political in character than this? There will be no resolution of the North Korean nuclear issue without President Obama’s leadership. What is most urgent is for the U.S. to break free from the mindset that North Korea will never give up its nuclear ambition. If the U.S. fails to accommodate North Korea’s willingness to negotiate and resolve the nuclear issue in exchange for a peace settlement in Korea, it will push North Korea to side with the Chinese, ultimately supporting China in the Sino-U.S. rivalry. It will likely also push South Korea and Japan, both key U.S. allies, to develop their own nuclear weapons programs, making the U.S. promise of a nuclear umbrella a dead issue.