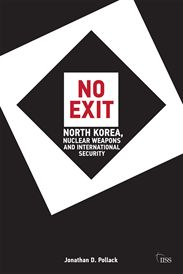 Jonathan Pollack’s No Exit: North Korea, Nuclear Weapons and International Security is a welcomed addition to the ever-expanding, if increasingly cluttered, field of work on the North Korean nuclear program. Most of these works, written by security experts, are generally concerned more with influencing U.S. policy toward the DPRK than with understanding why the North Korean leadership feels a need to achieve strategic autonomy. No Exit departs from this troubling paradigm. It is not another ahistorical and America-centric overview of Washington’s negotiations with the insular and highly idiosyncratic North Korean regime. Nor is it an examination of options available to the United States for dismantling the DPRK’s nuclear weapons programs. Avoiding this approach is sensible because, according to Pollack, senior fellow with the Brookings Institution, “America was a late entrant into the Korean nuclear saga.”[1] By the time the United States even began to take a serious interest in the DPRK’s nuclear program, the pursuit of a nuclear deterrent had already become deeply rooted in the identity of the North Korean regime. No Exit is the story of how this happened; how Kim Il Sung, and later Kim Jong Il, learned to love the bomb, and why it will be difficult, if not impossible, to get the current and future North Korean leadership to give it up.

For most American observers, the North Korean (DPRK) nuclear issue begins in the early 1990s, as the DPRK’s leaders, having lost their Cold War alliances and confronting unparalleled challenges, redoubled efforts to achieve strategic autonomy through the pursuit of nuclear weapons. In No Exit, however, Pollack argues that the North’s quest for strategic autonomy has much deeper roots. To demonstrate this, he taps into the vast and expanding cache of documents from the archives of North Korea’s former communist allies released by the Wilson Center’s North Korea International Documentation Project. These tens of thousands of pages of formerly secret cables between Pyongyang and communist bloc embassies reveal details about North Korean decision-making processes during the Cold War and enable us to better understand the historical experiences that continue to shape North Korean views of their own vulnerabilities and the potential for cooperation and conflict with other states.

The strength of this book lies with the author’s use of a selection of these documents to chronicle how Kim Il Sung’s strategic thinking about nuclear weapons evolved between 1945, when Kim witnessed the destruction of the Japanese empire by two nuclear bombs, until he decided to develop an indigenous North Korean weapons program decades later. As Pollack demonstrates, there is little in the available documentary evidence to suggest that resistance to the United States is what led to Pyongyang’s pursuit of a nuclear deterrent. Rather, following a series of betrayals, real and perceived, by Moscow and Beijing, and especially with the intensification of the Sino-Soviet split, North Korean leaders did not believe the Soviet Union and People’s Republic of China could be trusted to safeguard the security of Korea. This was particularly the case after the withdrawal of Soviet missiles from Cuba at the conclusion of the 1962 Cuban Missile Crisis and the deterioration of Sino-DPRK relations during the Cultural Revolution.

While North Korea had been engaged in nuclear research programs from the 1950s, the author argues that it was not until the 1970s that the regime began to lay the groundwork for its nuclear weapons program. He suggests that Kim Il Sung was motivated by envy at South Korea’s economic development, a continuing need to secure Pyongyang’s independence from their untrustworthy “allies” in Beijing and Moscow, and a desire to leave a legacy for his successor and son, Kim Jong Il. Another critical factor in the decision to develop a nuclear weapons program was Seoul’s effort to develop a program of its own in the 1970s. While Pollack does not provide any evidence related to the South Korean nuclear program, it is clear from documents only recently obtained from the Romanian Intelligence Archives that Kim Il Sung was indeed aware of, and was concerned about the South Korean program, making an official request in 1976 for equipment to detect nuclear explosions.

According to Pollack, Pyongyang also saw the emerging global nuclear nonproliferation regime in the 1970s as a way of enhancing its ability to acquire a nuclear deterrent. North Korea joined the International Atomic Energy Agency (IAEA) in 1974, and between 1975 and 1979 had a nuclear scientist stationed at the IAEA’s head office in Geneva, where he obtained designs for the construction of a nuclear reactor.

In terms of source materials, Pollack’s book can roughly be divided into two parts. He skillfully weaves the newly translated materials into his narrative to tell the story of North Korea’s modern historical experience, particularly through his discussion of 1940s, ‘50s, and ‘60s. From chapter three, when the author begins to explore the 1970s, his argument is based less on the diplomatic record of North Korea’s former communist allies, but relies heavily on interviews with Chinese and other diplomatic and intelligence officials from the former communist bloc, conjecture, and a bit of Kremlinology. For the 1970s and 1980s, the unavailability of documentary evidence from the former communist bloc is partly due to restrictive archival practices in many of these countries, where documents from more recent decades are still classified, particularly on such sensitive issues as relations with North Korea. (Though, since No Exit went to press, the North Korea International Documentation Project has obtained several thousand pages of former East German, Romanian, and Hungarian archival documents on North Korea through the late 1980s.)

For the last chapters of No Exit, although the history is better known to most North Korea watchers—that of the first nuclear crisis and ongoing standoff—the inaccessibility of materials from these countries is a greater problem. With the liquidation of the Soviet Empire in the late 1980s and early 1990s, the embassies of the DPRK’s erstwhile “fraternal” allies were to an even greater degree isolated by the North Koreans. The author manages to work around this problem by supplementing the limited number of available documents with fascinating details obtained through interviews with Chinese diplomatic and intelligence officials, and from the published memoirs of Chinese leaders.

Based largely on these interviews, Pollack’s discussion of the first and second nuclear crises seems perfectly plausible, and the portrayal of North Korea’s actions appears consistent with behavior of earlier decades. However, the author’s claim that Kim Il Sung seriously considered the possibility of forgoing strategic autonomy and engaging in serious economic reform shortly before his death is debatable. According to Pollack, these plans were thwarted by Kim Jong Il, with whom the senior Kim had a falling out in the last year of his life. But, if true, Kim Il Sung’s plans would have gone against his lifelong convictions. Kim’s legacy was his hyper-obsession with defending the sovereign prerogatives of the DPRK. Korea’s loss of sovereignty to Japan for thirty-five years under colonial rule, and repeated interventions into the DPRK’s sovereign affairs by China and the Soviet Union throughout the Cold War had taught him that Korea needed to be protected from the depredations of a covetous and overly interventionist  outside world. This led Kim to adopt a policy whereby the DPRK would preserve its sovereign prerogatives through selective disengagement and restructuring of political and economic relationships with other countries, supplementing these ties with a reliance on indigenous human and materials resources.

This policy of “self-reliance,” or Juche, evolved throughout the 1950s and 1960s, before it became institutionalized as the official state ideology in the late 1960s. As newly obtained documents reveal, Kim Il Sung fervently believed that only he understood the realities on the ground in Korea, and that only he could prevent Korea from being placed in circumstances that would once again jeopardize its sovereignty. This included a rejection of coordinating economic activities with the socialist bloc through COMECON, for fear that it would give foreigners a say in what the DPRK produced. Kim sought to safeguard the sovereignty of the DPRK, both outwardly and inwardly. Outwardly he categorically opposed all forms of external intervention into the DPRK’s internal affairs, even from allies; internally, following a series of domestic challenges to the development strategy that Kim had designed to safeguard the North’s  sovereignty, “the rule of the sovereign,” as Charles Armstrong has suggested, became “utterly unquestionable.”[2] By abandoning the effort to achieve strategic autonomy in the twilight of his life, as Pollack suggests occurred, and also by engaging in real economic reform, including the opening of the economy to stave off collapse, Kim Il Sung would have betrayed these principles.

Throughout the book, Pollack does an excellent job of describing the continuity in Pyongyang’s security concerns, though he chose not to place it in terms of Juche and its three principal applications that developed during the 1950s and 1960s; self-reliance in national defense (Jawi), self-reliance in politics (Jaju), and self-reliance in economics (Jarip). Whether you regard Juche as a sham philosophy that exists only to be praised,[3] or as a religion,[4] the North Korean regime continues to couch their policies in the language of Juche, and its later incarnation, Songun, or military first politics. Juche therefore at least deserves an explicit mentioning (Pollack implicitly describes the guiding principle).

This does not diminish the overall impact of No Exit. The work provides the most effective and accessible distillation of Pyongyang’s perennial security concerns over the past six decades that is available to date. This makes No Exit an indispensable source to anyone interested in North Korea and should be featured prominently on the bookshelves of security experts. In particular, it should be read by the innumerable newly-minted North Korea “experts” who abuse the misperception that North Korea is a black box and publish uninformed analyses of North Korea’s actions that do little but perpetuate myths about the DPRK, all with few repercussions. Fortunately, Pollack debunks the myth of the black box by demonstrating that we have much more information to call upon than most observers recognize. The book will also be a valuable resource for scholars—Koreanists and non-Korea specialists alike—and students of modern Korean history and politics.

[3] See B.R. Myers, The Cleanest Race: How North Koreans See Themselves and Why It Matters (New York: Melville House, 2010).