Kim Jong Il’s death was announced less than three weeks ago. But the world is surprisingly quickly getting used to the new leadership in North Korea, as if there were no concerns left at all. To provide a counterweight to this amazingly complacent mood, and the many speculations about a stable North Korean future (including my own), I’d like to play devil’s advocate and ponder a relatively pessimistic scenario based on my reading of some developments that should be watched carefully.

We do have reason to believe that the current course of events related to succession in North Korea is more of the improvisation type than the outcome of a long-term strategy. In the end, it might indeed work and Kim Jong Un and the system will survive, but this is by no means to be taken for granted.

What we have seen in the days since December 19th is an attempt to accomplish in two weeks for Kim Jong Un what had been given two decades or more for Kim Jong Il. This includes the dramatic change in status of the heir’s father. To me, this is the single most important development in the current succession, and should thus be understood and watched carefully.

Kim Jong Il has suddenly been elevated to being an independent Great Leader, a status that he was careful to avoid during his lifetime. This is not to say that there was no extraordinary cult around his person. But his cult differed markedly from that around Kim Il Sung.

For the past decade, despite trying hard, I could find only a few hints of Kim Jong Il developing his own legitimacy that was independent of his father. This included the example below where the Ilsim Tangyŏl slogan (one heart, united) was shown with only a Kimjongilia, but no Kimilsungia (the flowers symbolizing the two leaders), in other words: let’s all unite around Kim Jong Il. 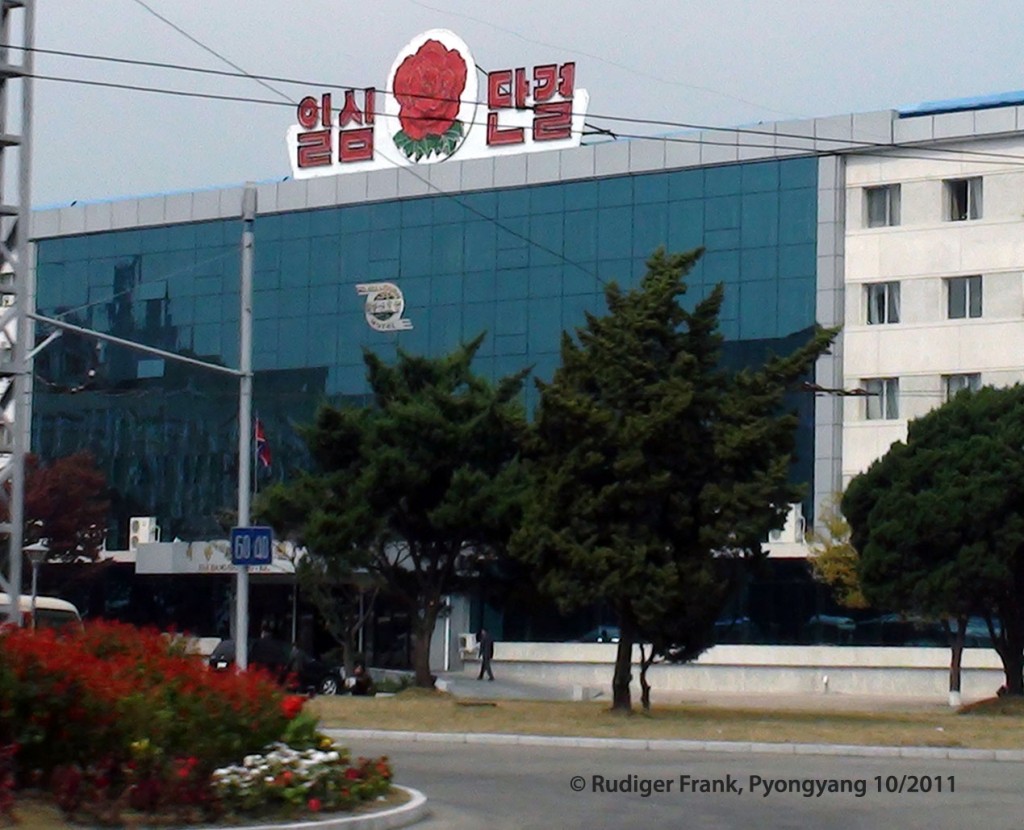 In 2009, for the first time, Kim Jong Il’s birthplace appeared on banknotes. Before that, the only family member represented on North Korean currency was Kim Il Sung. When you traveled around North Korea after 1994 and had an eye on the omnipresent slogans, the message was mostly “Great Leader Kim Il Sung will always be with us.”

This could have been just an expression of Kim Jong Il’s humble personality, but I think he knew what he was doing. His legitimacy was built almost exclusively on being the sole prophet of his towering father. As such, he was accepted and untouchable. Kim Jong Il had very good reasons not to erect any statues of himself, not to give his name to streets and plazas, and not to have pins with his own image replace those of his father. The “country of Kim Il Sung” is what most North Koreans, as defectors confirm, subscribe to with little hesitation. The next time you feel tempted to compare North Korea to a monarchy, ask yourself who has been the predecessor of Queen Elizabeth II. Exactly, most of us have no idea. A new King or Queen takes over, pays due respect to those who came before, and then puts his/her name and face on coins and stamps. It’s “God save the Queen,” not the Queen’s father.

North Korea does not work that way. Legitimacy does not come from being born in the right family, although it helps. Legitimacy must be “earned.” The Eternal President liberated the country from the Japanese and won a shining victory against American aggression in the Korean War. This is what people have been told, this is what they believe, this is what, in their view, granted Kim Il Sung every right to govern the country that he single-handedly created and protected. Not least, he had his old guard of loyal followers around him, and I mean really loyal as they had gone through all kinds of ordeals together ever since the days of the Minsaengdan incident. Why that is important? Because the loyalty of a former brother-in-arms is different from that of a minion. In 1994, Kim Jong Il could still count on support by his father’s old friends. Kim Jong Un cannot in 2012 because most of them have died by now.

For two decades since the mid-1970s, Kim Jong Il was promoted as the only person in the world who could fully grasp the wisdom of Kim Il Sung: he joined him on his numerous journeys through the country, learned from him, assisted him and then humbly continued his work. Kim Jong Il’s position after 1994 was weaker than that of his father, but he could convincingly claim to be the only logical choice for the continuation of a path and leadership that was largely undisputed and beyond any doubt.

One does not need to be a North Korea expert to understand that the same degree of legitimacy cannot be passed on to Kim Jong Un. Kim Jong Il was not Kim Il Sung, but he was his closest aide. Kim Jong Il did not fight against Japan, but he was said to be born at Mt. Paektu. Kim Jong Il did not win the Korean War, but he built the bomb and initiated the Military First era. Kim Jong Il did not invent chuch’e, but he systematized it. Nevertheless, Kim Jong Il for a long time in his career was a moon, not a sun. He gleamed because he reflected Kim Il Sung’s light. This is the “text,” as Brian Myers calls it. But how can a moon illuminate the next generation as brightly as a sun?

The logical choice for a sustainable solution to power succession and legitimacy transfer would have been to enshrine the two eternal leaders—father Kim Il Sung and son Kim Jong Il—forever and move to a system of legitimacy that would build on fulfilling their legacy in the most perfect way. This would require an apparatus and a collective of trustees with a primus inter pares at their helm, very much like China’s Party/Central Committee/General Secretary, or the Catholic Church/Rome/the Pope. God and Jesus, Allah and Mohammed, Lenin and Stalin—religion and history know many relatively successful cases where after only one real successor, a new collective mode of leadership was chosen.

However, such an approach entails risks. It needs to be well prepared, flanked, and formalized to be successful. Such formalization needs time, and time North Korea did not have. Right after Kim Jong Il’s alleged stroke in 2008 we saw the continuation of movements towards preparing the scene for a new collective leadership model, and at the same time preparations for a backup plan: third generation succession. Clearly, the urgency was understood, but nevertheless, more time was expected. Look at the number of KCNA articles mentioning Kim Jong Un: on average around 10 per month in 2011 until November, as opposed to over 300 on average for Kim Jong Il. This shows that Kim Jong Un was in a similar stage of succession as Kim Jong Il was before 1980, i.e. moving into position but not yet ready.

This is definitely not how you prepare immediate succession. Or look at the stamp below, issued on December 30, 2011. It seems there weren’t even enough of the classic father-and-son pictures taken, necessitating some editing. Such photos played an important role in the building of Kim Jong Il’s legitimacy as they symbolize the unity of father and son. I bet the artists at Mansudae Studio are now working overtime to produce appropriate paintings. But they have been beaten by the filmmakers who produced a documentary on Kim Jong Un just recently. 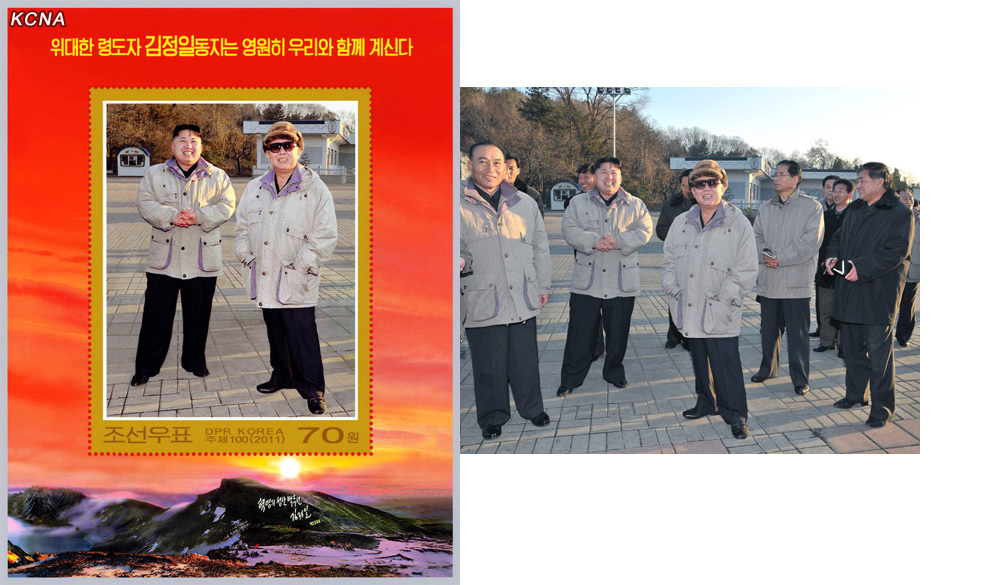 There was a long-term plan for a sustainable solution of the succession problem, and a short-term backup plan under construction just in case. On December 17, neither was ready. But with stability being the top priority, a power vacuum was to be avoided at all costs. Thus, Kim Jong Il’s untimely death means that the backup plan is now being implemented at Ch’ŏllima speed and on a massive scale.

No time was lost when in the very message about the Leader’s death the announcement of his successor was included. Suddenly we hear about Kim Jong Il country, about the need to erect statues to his honor, about Kim Jong Un being Kim Jong Il, about Kim Jong Un being the supreme leader of the Party, the state, and the military. But will this be enough? This is not just another campaign. It is the question of who will lead the country in difficult times. Two or three weeks of a propaganda speed battle are hardly enough to achieve the same level of acceptance as two decades of careful preparation could in the case of Kim Jong Il. The North Korean population does not consist of mindless robots. The elite have become entrenched and self-confident. Just watch the official KCNA videos on the mourning carefully. You find numerous examples of women with dyed hair, haircuts that are more South Korean or Japanese than “our style,” and, in one case, even something that suspiciously looks like eyelid surgery. Plastic surgery in North Korea and the state TV doesn’t even notice… The Pyongyang middle class has come a long way. 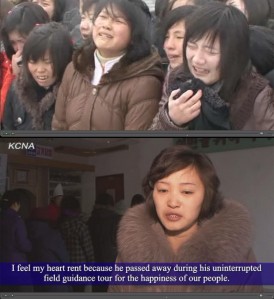 2012 is not 1994. Out of necessity, a repetition of the Kim Il Sung—Kim Jong Il succession is now being attempted in North Korea, but it was ill prepared and takes place under very different domestic conditions. The country has been severely shaken by the loss of its leader, and it has not yet re-stabilized despite a massive propaganda campaign. Any extraordinary event, such as a natural or a manmade disaster, could have dire consequences for a country already on edge. Kim Jong Un and those standing behind him can only hope, but they cannot be certain, that there will be no palace revolt, mutiny or another Ryongchŏn blast. If the Party remains united behind him, and if it maintains its tight grip on power that has been demonstrated in the past weeks, only then will Kim Jong Un be able to keep North Korea stable and build or expand his power base. Who knows, with the enthusiasm of the youth, the experience of his international life and support from China, he could even lead his country towards the reforms it needs and that it deserves. But at this point, even though everything looks quiet, it is too early to be so optimistic.