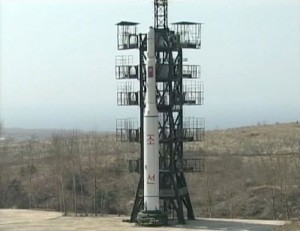 The US-DPRK deal signed last month is a softline message; the Satellite Launch is a hardline one. Washington would do well to ignore the hardline one.

In 1962, with the United States and the USSR seemingly spiraling towards nuclear war, Khrushchev and Kennedy engineered history’s most important diplomatic breakthrough.

At the height of the Cuban Missile Crisis, with both the White House and the Kremlin under incredible pressure, Khrushchev sent Kennedy a message that demanded a declaration of non-aggression from the United States towards Cuba in return for a Soviet withdrawal. The next morning, however, after consultation with government officials more inclined to take a harder line, Khrushchev sent Kennedy a second letter. This one demanded the United States remove its Jupiter missiles from Italy and Turkey as part of the deal, a proposal that would have made Kennedy appear to cave to high-stakes blackmail had he accepted it.

Kennedy and his executive committee’s choice at this juncture was to prove crucial: they ignored the hardline message and merely responded to the first, while later making a backroom deal to get rid of the Jupiter missiles.

What this served to do was empower Khrushchev and the ‘softliners’ in his cabinet to go back and essentially say, “We have a breakthrough here, we’ve won a concession that may not be perfect, but it offers a road towards solving this mess.”

North Korea’s announcement of a satellite test planned for April has understandably kicked up quite a fuss as governments try to decide how to respond. South Korea’s Foreign Ministry said it would be a “grave provocation,” while Japan’s cabinet secretary urged North Korea not to carry out the test, saying it was a violation of UN sanctions.

Pyongyang will argue strenuously that it is a peaceful satellite launch, legally covered by the 1966 Space Treaty to which Pyongyang signed up in 2009. It has also chosen a location the Northwest in a move to assuage any concerns the Japanese would have over a North Korean missile flying in their direction again.

The counter will be that ballistic missile tests—which these will also be—are forbidden under UN sanctions. Moreover, it violates the spirit, and possibly the letter, of a US-DPRK agreement signed so recently the fax machines are still warm. That agreement has North Korea freezing nuclear activities at Yongbyong and suspending “long-range” missile tests in return for 240,000 tons of food aid.

The initial reaction of many must have been to think this is typical North Korean deal-breaking. But North Korea hasn’t seen a single high-nutrition biscuit from that deal yet, so why would it do something that could very likely scupper the whole thing before it gets what it bargained for?

A few possibilities come to mind.

First, as has been the case before, it may be that Pyongyang was negotiating with the United States as sort of a probe with no intention of seeing the deal through. However, while there are some new personalities on both sides—by all accounts very cordial—the Obama government is now more than three years old; the Koreans are acquainted with this administration. There is also not much logic in attempting to drive a wedge between Seoul and Washington. Lee Myung Bak is in the twilight of his presidency. Obama is gearing up for his re-election campaign. Pressure from Pyongyang only emboldens the candidates they’d rather not deal with in both countries.

Second, we might be inclined to think this is part of a strategy in which quickly backsliding on the deal was premeditated. In this scenario, North Korea has set something of a trap for the United States. If food aid is apolitical, as the US claims, backing out of the deal makes the US appear disingenuous. The value of this compared to waiting for at least some of the aid first seems uncertain, especially as North Korea appears disingenuous by calling for a satellite launch so soon after inking the food aid deal.

Third, it may be that since the agreement would provide nutritional assistance not in the form of rice or other grains, that Pyongyang deemed its value too low to warrant the freeze of its nuclear and missile programs. This may be the case, but then why not just reject the deal at the negotiations themselves?

Fourth, perhaps it is a case of domestic concerns trumping external ones. Symbolism is highly important to North Korea and demonstrating that it is a high-technology great power to its citizens on Kim Il Sung’s centenary birthday may just be more valuable than either food aid or improved relations with the United States. Perhaps an ongoing debate about whether to bolster the celebrations with a high-tech show was unresolved until just recently.

There is another possibility that assumes a master plan. It is possible that North Korea intends to back out of the satellite launch, using the affair to further demonstrate the new government’s good intentions and reasonableness to the outside world. Making the announcement a month in advance leaves a lot of time for North Korea to back down. However, if this is the case, Pyongyang will have to use its best writers for the tricky job of explaining why they decided against such a symbolic exercise, as they made the announcement in the most public way possible on their domestic TV channel.

All these guesses make the mistaken assumption that North Korea is a unitary actor—a “one mind, one voice” kind of government. It is not. Like any government, individuals and institutions have varying perspectives and goals. The Foreign Ministry tends to have an interest in bettering relations with the United States, while the military is less inclined to deal with its longtime enemy.

If one accepts this perspective, the most likely explanation becomes that the people who negotiated the deal—the Foreign Ministry—did not know the satellite/missile test was going to take place, certainly not so soon. Somewhere in the swirl of interests competing for Kim Jong Un’s graces—and vice versa—things became uncoordinated and antagonistic points of view could not be harmonized by the maximal leader or among the regency surrounding him.

The situation then appears to be two different groups of elites, with two different intentions. One group has sent softline messages, with the “food for freeze” agreement. (There were even reports this week of a North Korean suggestion to set up mutual liaison offices in Washington and Pyongyang). The other has sent a hardline message, with the announcement of the rocket launch.

Ignoring the hardline message, as Kennedy did, will be impossible for Obama. American policy is also formed under the constraints of both domestic and international alliance politics. It would be a dramatic change in approach, and in the United States—as in North Korea—political actors operate under the constraints of a domestic hardline vs. softline spectrum. The voices calling to scrap the deal are strong already—if the test goes ahead, those voices will be overwhelming.

Some North Korea watchers have suggested the United States could find a way to admit limited satellite testing is legally acceptable, perhaps while arguing for international monitoring. But this would require spending political capital Obama probably cannot afford to waste, especially in the minefield that has been US-DPRK relations. Obama will simply appear too weak to continue with the deal.

The political need for the United States to yank the nutritional supplements will be unfortunate, then, for two reasons. First, the constitution of the food aid does a pretty good job of targeting the most vulnerable in the population; the Korean People’s Army is just not that interested in baby formula. From a purely humanitarian perspective it should continue.

Second, it tells the hardliners that they can mess up any thaw in relations even with provocations that threaten relatively little. It simultaneously strips the softliners of their achievement, so they return to the internal debate empty handed instead of giving them capital with which to say “look, our way is paying dividends.” Instead, the parameters of the US-DPRK relationship are continually set by hardliners.

As the Cuban Missile Crisis shows, responding to the right message is key. Kennedy had the luxury (one of very few those two nightmarish weeks) of making the choice behind closed doors. This is out there in the public sphere making it almost impossible for the Obama Administration to justify continuing with the soft-liners under the shadow of a Taepodong-2. If someone doesn’t try it at some point, however, will the road out of this mess ever be found?