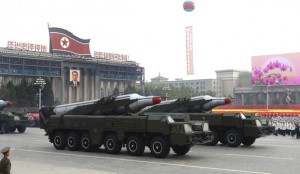 So, are the North Koreans going to test a fricking Musudan or what?

Along with many of my close friends from my days as a research assistant at the Center for Strategic and International Studies (CSIS), one of my first bosses was a rather colorful retired Army Colonel who would respond to our youthful indecision with a metaphor involving bodily functions that more or less amounted to “fish or cut bait.” He worked a lot on North Korea issues, even briefly holding the KCNA-bestowed title of “human dreg” for suggesting the DPRK had a “human rights problem.” I can’t help but think fondly of Bill, sitting in his smoking office, as I wonder whether Kim Jong Un will pit or get off the shot, as it were.

On May 7, 2013, citing a senior government source in Seoul, Yonhap reported that North Korea had “completely withdrawn two mid-range missiles from its east coast.” The next morning, Asahi quoted (sorry, it’s in Japanese) “several Japanese, South Korea, and United States Government officials” stating that North Korea had simply changed the deployment site, not withdrawn the missiles.

It was an amusing turn of events, since a week before on April 29 it was Asahi reporting that North Korea had withdrawn the missiles with Yonhap quoting officials denying the story.

Who the heck knows?

I suppose one possibility is that the North Koreans are—and I am going to use a term of art here—jerking our chain. In mid-April, The Korea Times’ Kang Seung-woo reported that North Korea was “constantly repositioning its transporter erector launchers (TELs) carrying Musudan missiles in South Hamgyeong Province” in order to evade US and South Korean surveillance. “Four or five TELs often shift from one place to another and we see the act as aimed at misleading missile monitors,” a government official told Kang.

Recall that, in the lead up to the December launch of the Unha rocket, North Korea announced that it was extending the launch window by ten days due to an unspecified “technical deficiency.” Yonhap even reported that the rocket had been disassembled on December 11, 2012.

When North Korea launched the rocket a few hours later, all hell broke loose. The Chosun Ilbo, admittedly not the most restrained publication in the free world, described the United States and Washington as “outfoxed by North Korea over the renegade country’s rocket launch,” quoting one rueful official saying, “We saw the trees but failed to see the forest.” Although I thought the circular firing squad was pretty silly—I mean we knew North Korea was going to launch the thing sooner or later—the press picked up the surprise meme. And the North Koreans were delighted with their “big surprise to the world.” As you know, the Premier loves surprises.

So, it is possible the missiles are still there. The late April report that North Korea had withdrawn the Musudans was the result of a poor inference based on signals intelligence—North Korea stopped sending telemetry and other communications from the unit responsible for the launch, leading some analysts to conclude North Korea had packed up the missiles and sent them home. In fact, it seems the missiles were still there. I was shocked to see such a frank discussion of sources and methods in the press by Presidential spokesperson Yoon Chang-jung—yes, the same Yoon Chang-jun who just resigned following allegations he sexually assaulted a 21-year old intern during President Park’s visit to Washington. Let’s hope this reduces the number of South Korean officials involved with leaking and groping.

On the other hand, there are other signs that the tension is slackening. The US Department of Defense had reportedly deployed the Sea Based X-Band Radar (SBX)—which looks like a giant ocean-going golf ball—to track a potential North Korean missile test. The SBX is now back in Hawaii. (How is this for an ambivalent lede in the Honolulu Star-Advertiser: “For whatever it means, the SBX now is back”?) The return of the SBX would seem to suggest a relaxation in tension, although it also possible that the SBX was hoping to get a glimpse of a Musudan test during a previously scheduled check out at sea, then didn’t linger too much past its scheduled return. For what it is worth, Pentagon spokes-bot George Little described the current situation as “a provocation pause,” which is not very reassuring.

What’s a wonk to do? Engage in a little speculation! Heck, there isn’t much else to pass the time while waiting to see if the Musudan works or not. Here are three scenarios for how this may play out. They are offered for free because, well, you get what you pay for.

I lean toward the first scenario, although who knows. The pressure from the Chinese may be helpful, and I confess to not being much of a… whatever we call the North Korean analogue to a Kremlinologist. (A Kumsusanologist?) Perhaps Pyongyang has decided not to waste the political impact of a first Musudan flight test until it has something else, such as a KN-08 flight test, ready to go.

Really, it is anyone’s guess, which is what makes it so fun.