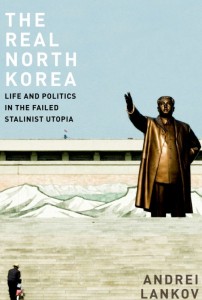 Andrei Lankov provides a very readable and absorbing introduction to North Korea in The Real North Korea, Life and Politics in the Failed Stalinist Utopia. The author combines a sweeping overview of North Korean political history (containing informative vignettes on other topics such as the status of women in society, monuments in Pyongyang, and the salaries of workers) with analysis of contemporary political, social, and economic developments. Lankov takes the story one step further, into the future, and offers musings and predictions on North Korea’s inclination to reform its politics and economy as well as on the country’s eventual demise.

Lankov, a Soviet-born and trained historian of early-modern and modern Korea, has become a regular commentator on North Korean affairs. His analysis of North Korea is informed by his background in Korean history, by his earlier work with the rich documentation on North Korea from the Russian archives, and by his experiences as a Soviet exchange student at Kim Il Sung University in the 1980s. These experiences make Lankov one of the most valued scholars in the field of North Korean studies. His personal experiences in North Korea in particular add a level of nuance to his writings, and especially to this book, that is so often missing from the innumerable works on the nuclear-armed Kim regime. He dismisses the idea that the North Korean people are little more than mindless automatons responding to the regime’s encoded instructions, observing that they are in many ways no different from any other people in that they are concerned about school grades and relationships, among other things.

The book provides a very good overview of North Korean history, with an emphasis on the political transformation of the regime and society. Lankov also does an admirable job of describing life in North Korea today. He suggests that the North Korean people are not nearly as isolated as is commonly believed, arguing that most are aware of South Korea’s prosperity. Given much of the content and the limited number of footnotes, the book seems to have been written primarily as an introduction to North Korea for non-specialists. This is not to say that it does not contain material that would be useful for the academic or policy communities. As mentioned, Lankov demystifies the North Korean people, giving them a human face. His section on relations between North Korea and China is also very refreshing as it suggests (as the historical evidence from the archives of North Korea’s former communist allies clearly proves) that there is a profound sense of mistrust at the root of the relationship that severely limits Beijing’s political influence over Pyongyang today.

While the book makes many valuable contributions, in the end, Lankov has done very little new research for it, and this is reflected in both his lengthy historical account and in his predictions for the country’s future economic behavior. Many of the ideas and arguments presented in The Real North Korea have appeared in the author’s innumerable articles and columns. The lack of any significant new research is regrettable given the appearance of new materials on the history of North Korea in the years since Lankov did his pioneering research in the Russian archives in the 1990s. Since that time, tens of thousands of pages of additional documents have emerged from the archives of North Korea’s former and current communist allies, shedding new light on the inner-workings and foreign relations of the DPRK. Very few of these new materials are cited in the book. Lankov’s historical narrative continues to be informed by his earlier work with a limited selection of Russian archival materials that document the role of the Soviet Union in the formation of the North Korean party-state. Relying almost exclusively on these materials, Lankov’s earlier work emphasized the influence of Stalin’s Soviet Union on the DPRK. While Lankov has updated his narrative slightly to suggest in The Real North Korea that the country’s founding leader, Kim Il Sung, was influenced not just by Soviet leader Joseph Stalin but also by his experiences as an anti-Japanese partisan fighter in Manchuria, as the subtitle of this book suggests, Kim never escapes the Soviet despot’s long shadow.

Lankov, for example, still portrays Kim as a little Stalin who used the Soviet despot’s crude and cold-blooded methods to eliminate potential rivals in 1956.The newly available documentation on North Korea—not used by Lankov—highlights another, perhaps greater motivation to many of Kim’s actions: postcolonial revolutionary nationalism. Kim’s actions were driven more by a desire to limit the influence of Pyongyang’s putative allies (Moscow and Beijing) on the trajectory of political and economic developments in the country. For nearly three years, Soviet-Koreans and China-returned Koreans challenged Kim’s development strategy and, by extension, his national security imperatives by encouraging the mechanical replication of post-Stalin Soviet economic, political, and cultural practices. The purge amounted to an attempt to eliminate conduits of outside influence into North Korea, i.e. the Soviet-Koreans and China-returned Koreans who elevated the political and cultural achievements of the Soviet Union and China over Korea’s own experiences.

Lankov’s analysis of North Korea’s future economic behavior could also have been more informed by additional historical research. He argues that North Korea is unlikely to open its economy and become integrated into the global economic system similar to China and Vietnam because the North Korean people will not support the regime once they learn how prosperous their brethren in the South are. Not only does this contradict his suggestion that North Koreans are much more informed about South Korea’s prosperity than most believe, it is also based purely on speculation. The better approach for a historian is to ask why the DPRK hasn’t embraced a policy of economic reform and integration since it was founded in 1948, and are those reasons likely to change in the coming years?

Lankov, who has studied the country as an historian for many decades could have provided a much more compelling case as to why North Korea might not follow the Chinese or Vietnamese paths to economic opening and integration by identifying the large, slow-moving trends where the odds favor prediction. North Korean leaders have long feared opening their economy and integration into larger systems. North Korea never joined the Council for Mutual Economic Assistance, or COMECON, the socialist camps’ scheme for international economic integration and coordinated national specialization. For decades, North Korea was under intense pressure from the Soviet Union and other socialist countries to coordinate production and industrial development through COMECON. Yet, although the DPRK acquired observer status in 1957, and certainly benefited from its bilateral trade relations with COMECON member countries, it never fully integrated into COMECON. The trend toward economic integration and coordination came into direct conflict with Pyongyang’s aspiration for establishing an independent national economy and limiting the influence of other, larger countries on the trajectory of economic developments in North Korea. Kim Il Sung recognized that the country would forever remain dependent on foreign countries for finished goods while North Korea would be a source of raw materials. As Kim boasted to a South Korean delegation of the North-South Coordinating Committee in November 1972, he refused Nikita Khrushchev’s suggestion that North Korea coordinate its activities with COMECON because there was such a discrepancy between the Soviet Union and North Korea in terms of economic capability. Kim likened Korea to being in kindergarten, while the Soviet Union was in graduate school. If North Korea had joined COMECON, “the discrepancy would only expand and North Korea’s participation in COMECON would leave North Korea with a lot of empty holes, where the Russians would be digging all the natural resources in exchange for finished products that the Soviet Union would be providing North Korea.” Kim therefore declined Khrushchev’s suggestion, saying “we are going to remain kindergarten kids and you may go and advance as graduate students. That is the way we will feel safe.”[1]

This is a trend that remained largely unchanged under Kim Il Sung’s successor, Kim Jong Il. While the junior Kim experimented with economic reform, most notably in 2002, the focus on carefully managing bilateral trade relations with select countries was never abandoned. These reforms were largely stopgap measures to resuscitate the economy after its collapse in the late 1990s. Moreover, these experiences and the economy’s weaknesses likely reinforced the sensitivities of North Korean leaders toward domination from foreign entities, especially ones headed by the United States.

While Lankov’s claim that North Korean citizens will not support the regime once they learn about the levels of prosperity in South Korea may in part be true, at least hypothetically, we have a clear history of the regime itself resisting openness and integration to call upon.

This reader also wishes Lankov had made an effort to integrate the Korean-language historiography into his analysis. Korea-based scholars writing in Korean have been doing some fascinating research on North Korea’s history and current affairs in recent years and Lankov, who teaches in Seoul, is in a good position to weave some of this new research into his narrative.  Finally, although the book is perhaps intended as an introduction to North Korea, the limited number of footnotes in the book is at times a nuisance for those who wish to consult Lankov’s sources themselves.

Interpretive differences notwithstanding, Lankov clearly recognizes the value of history to the North Koreans, and also appreciates the need for those studying the country to understand this history to better interpret what drives the Kim family. Lankov’s Real North Korea offers a lot for readers with any level of familiarity with North Korean affairs. While I cannot confirm one way or the other that the book presents the real North Korea, Lankov certainly gives the reader a more well-rounded view of life in the DPRK by describing not just the trials of daily life during the famine in the 1990s, but also the happier and more prosperous times. This book is essential reading for all students of North Korea.