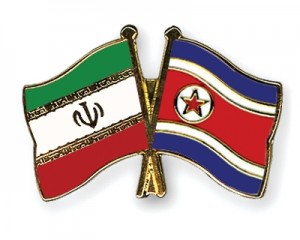 In 2012, I attended a Track II meeting with some North Koreans where they mentioned a series of space launches. A series, I asked? They didn’t want to say more, but left me with the distinct impression that we’ll be seeing a lot more launches from the DPRK. After that meeting, North Korea tried twice—a failed launch in April and then succeeding in December 2012.

Iran, too, has been launching satellites—and monkeys—into space. While I am sure most North Koreans and Iranians dream of the stars, it is understandable for those of us in the United States to wonder whether they have more earthly aims. One need not be a cynic to look askance at North Korean and Iranian aspirations regarding the peaceful use of outer space when Pyongyang publishes pictures of the now famous “Map of Death.”

Given the state of relations between North Korea and Iran, the mind tends to wander onto the subject of missile cooperation between the two. Part of the fascination is simply the joy of a super villain team-up. The better part, though, is a question about whether a negotiated agreement with either can work in isolation. Can we reach an agreement with Iran to deal with its worrisome nuclear and ballistic missile programs if there are no constraints on North Korea? How about the other way around?

We have known for a long time that North Korea and Iran cooperate on missiles—just look at the resemblance between Iran’s Shahab-3 and Pyongyang’s Nodong missile. But in recent months, there have been rumors about a relationship that go beyond the odd missile sale (or six). Last year, Western diplomatic sources told Kyodo’s Inoue Tomotaro that Iran now stations four missile experts at a facility in North Korea about 85 kilometers from the Chinese border. The source said the mission included experts from Iran’s Ministry of Defense and Armed Forces Logistics as well as the private sector. Subsequent stories linked the Iranian “engineering team” to the Shahid Hemmat Industrial Group. Although none of the stories say so, the rumor is that the Iranians are stashed in the Chongju area safely out of Pyongyang. (Seriously, can’t one of these guys put up a picture with a Farsi caption like “the best Kebab stand in North Pyongan Province” or something?)

Then Bill Gertz at the Washington Times got into the act, claiming that a team of Iranians traveled to Pyongyong to work on a larger “super ICBM,” long suspected to be under development. Like all of his stories, this one seems to be a mixture of genuine reporting, balderdash, and naked partisanship. Gertz wrote the story to discredit the interim nuclear deal with Iran, on the laughably flimsy premise that the Iranians were in North Korea at the same time Kerry was in Geneva. Yes, that’s right: He’s slut-shaming the Iranians for two-timing us with Pyongyang. (Never mind that we aren’t negotiating with Iran concerning its ballistic missile programs. We probably should have that conversation, but when we do, Gertz will be against it!)

The technical details are awfully confusing. Gertz refers to the “80 ton” “super ICBM or heavy-lift space launcher.” North Korea’s Unha space launch vehicle’s first stage is already about 80 tons. So, this is a “super ICBM or a heavy-lift space launcher” that is the same size? Definitely not, right? A real heavy ICBM, like the old Soviet SS-9 or SS-18s deployed during the Cold War, would have a first stage that is much, much larger than 80 tons.

It’s hard to know, precisely, what sort of cooperation is going on between the Iranians and the North Koreans.

First, we know they do cooperate when it comes to missiles. Pakistan and Iran both bought Nodongs from North Korea in 1990s. But while Pakistan deployed a clone called the Ghauri, Iran worked very hard to make the Shahab-3, based on the North Korean missile, its own. Robert Walpole, then-the National Intelligence Officer for Strategic Systems, told Congress “Iran procured No Dongs and then sought Russian assistance to modify that into the Shahab-3…”

There are other indications, as well. Iran’s Simorgh SLV bears more than a passing resemblance to the first stage of the North Korean’s Unha. There are reports that, in 2004, North Korea probably sold Iran the same Soviet sea-launched ballistic missiles that are believed to be the basis for North Korea’s Musudan, the new road-mobile intermediate-range missile. Finally, the US intelligence community’s formerly annual 721 reports describe support from North Korean and Russian entities for Iran’s ballistic missile program.

Second, there are rumors the Iranians and the North Koreans signed a secret annex to the recent Memorandum of Understanding (MOU) on scientific and technical cooperation. Both country’s official news agencies, KCNA and IRNA, reported that they signed an MOU, which the Iranians described as “conducting research studies, exchange of university students and researchers, setting up joint laboratories, sabbatical studies, exchange of technological know-how, Information Technology, energy, environment, sustainable development, agriculture and food stuff.”

Inoue reports that the parties also exchanged a secret two-page document that provides for the permanent stationing of an Iranian mission in North Korea. Obviously, neither official news agency is going to report on a secret document, but KCNA’s description noted that Ahmad Vahidi, Minister of Defence and Armed Forces Logistics, attended the signing, as well as a welcome function and a banquet. It is not unreasonable to suspect that that the agreement has a defense component. That, or Vahidi just loves buckwheat noodles.

Third, Shahid Hemmat Industrial is the manufacturer of the Shahab-3, and responsible for working with the North Koreans, Russians and others. It is also a US-sanctioned entity. If the Iranians sent experts from their defense industry to North Korea, this company would be the obvious choice. Some of the news stories even note that the engine test stand at Shahid Hemmat’s facility in Iran resembles one in North Korea, but engine test stands all look alike to me.

Finally, both Iran and North Korea are probably working on larger space launch vehicles than the existing models. The North Koreans have said they want to place a satellite in geostationary orbit, which means a bigger rocket is needed. The Three Revolutions Museum’s space exhibit in Pyongyang shows an artist’s conception of a much larger rocket in a larger gantry tower that we’ll call the Unha-X. The North Koreans also have gantry towers at the Sohae launch pad that, as Nick Hansen has observed, suggests something larger than the Unha is in the works. Iran, too, wants to place satellites in geostationary orbit. We don’t know that they’ve discussed the matter, but let’s assume it came up.

This is where things get interesting. North Korea and Iran might choose to cooperate to make a larger SLV that could also serve as an ICBM, just as the US Titan II, built in the early 1960s, could put astronauts in orbit or, if the balloon went up, rain megatons of death and destruction down on the Soviet Union. But a large liquid-fueled ICBM would have significant military limitations—such a missile takes a long time to fuel and must be based in a vulnerable silo. (Although the North Korean’s road-mobile KN-08 is hardly a model of invulnerability, a workable mobile missile would offer North Korea far more survivability.)

In fact, there have been stories in recent weeks suggesting that North Korea is building silos near Samjiyon in the shadow of Mount Baekdu but something stands out about them: the United States and South Korea reportedly identified the silos (if they exist, that is) during construction, before North Korea could have camouflaged them. Newly declassified documents demonstrate that the United States also watched China build silos and cave sites for its early large liquid-fueled rockets, before attempting to cover the sites with camouflage. (In fact, the act of camouflaging a mountain valley frequently drew the attention of satellite imagery analysts in the leafy Washington exurbs.) Given the vulnerability of their silos, Chinese designers took to describing this mode of basing as placing a missile in a “tomb.”

Why would North Korea want a “super heavy” (really, semi-heavy) ICBM anyway? There are basically two advantages to increasing the size. One is that it would allow the North to put multiple warheads on a single missile—but North Korea doesn’t seem to have enough plutonium (or even highly-enriched uranium) to do that. Moreover, given the vulnerability of silos, North Korea would be crazy to parcel a small stockpile of nuclear weapons out to an even smaller stockpile of missiles.

Those North Koreans can be so hard to figure out. One minute Kim Jong Un is launching a satellite and yukking it up with Dennis Rodman; the next, he’s executing his uncle. Almost inscrutable, you might say.

Hey, here’s a crazy idea: How about we ask them?

In recent weeks, the Obama administration has made it clear that it isn’t interested in sitting down with the North Koreans, unless they do a lot of things first. The North Koreans themselves, haven’t been exactly cheery, referring to Barack Obama’s vision of a world without nuclear weapons as “a smokescreen and sophism to cover up the U.S. wild ambition to dominate the world by dint of nuclear superiority.”

Once upon a time, we might have prevailed on the Chinese to intervene, but they tried that most of this year. It didn’t work, and now one of their preferred interlocutors is taking a dirt nap for anti-party factionalism. Frankly, things don’t look so hot if you think a missile deal would be helpful.

It’s pretty hard to even find a plausible conference room to meet, let alone get the North Koreans into it. North Korea isn’t even a member of the Committee on Peaceful Uses of Outer Space in Vienna—although Iran is. Say, there’s an idea. Perhaps we might imagine Iran’s cooperation with the DPRK as a source of access, rather than concern. Bill Burns might ask his new best friends in the Iranian backchannel if we couldn’t extend an invitation to the DPRK to participate in an international meeting on access and use of geostationary orbit. We’re a long way off from reviving missile negotiations with the DPRK or extending the Geneva process with Iran, but it wouldn’t hurt to sit down and simply talk to the Iranians and the North Koreans about their plans for putting more satellites in orbit.