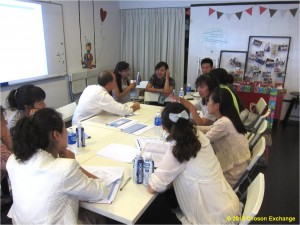 In the fall of 2012, Choson Exchange inaugurated a Women in Business (WIB) program in North Korea. The program was meant to encourage the participation of females in business and entrepreneurship training among our target demographic of 20-40 year old young professionals. Participants would attend a workshop in North Korea, from which, we would interview and select the best participants to take part in a follow-up overseas study trip.

For the past five years, our programs have been focused on economics, business and legal training for young professionals in North Korea. But doing a program targeted toward this oft neglected and underrepresented demographic made us excited and nervous at the same time. We have always wanted to do something for the female managers that underpin the emerging small and medium-sized business sector. However, there is little precedent or state sanction for this type of work. On occasion, our North Korean partners tried to steer us instead towards training on Special Economic Zones, a high priority issue with significant state encouragement. And the few professional training initiatives that exist for North Koreans have predominantly male participants.

Initial reactions to this program from North Koreans were mixed. Some North Korean participants from past programs were bemused but supportive of the idea. Our partners were initially unsure where to even find enough female participants, much less how to ensure they could attend the overseas component of the program. Some male participants in our in-country program jokingly accused us of sexism, and one male participant even admonished, “You have to interview us for the overseas program… men make all the important decisions!” Obviously, he failed to grasp what we were trying to do.

Having run the WIB program for over a year now, I am glad we chose to focus on this “unimportant” demographic in North Korea. Many participants had interesting backgrounds and ideas. At one workshop focused on service-sector businesses, we had an Australian entrepreneur who pioneered fine dining in China talk about her business experience. The entrepreneur claimed what made her successful, after dropping out of college, was that she did every job that could be done in a restaurant—cleaning the floors, washing the toilets, cooking, waitressing, handling the money and bartending—before setting up her business. A Korean participant enthusiastically responded to the story, telling us over coffee break how she too worked on all those jobs before becoming the manager of a restaurant. She was also full of questions about systems that could raise the productivity of her waitresses.

Enthusiastic participants were an unexpected boon. For us, the rationale for focusing on this sector was to support entrepreneurship. A little known fact about North Korea is that there is a quasi-private small and medium-sized business sector.[1] This sector is dynamic, growing and helping to improve the independent livelihoods of many people. While there are many women employed in this sector, there are traditionally far fewer opportunities for them to benefit from formal business education or participate in overseas training programs. 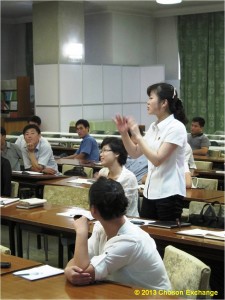 The participants came from varied industries and companies. We think of our “customers” as individuals, not institutions, and encouraged a wide-range of companies to send participants. In the end, 41 institutions had representatives take part in our programs. Most were junior to mid-level managers. The restaurant and service sector were the best represented, alongside participants from light manufacturing, mining, logistics and retail. The highlight of the year was when we brought a China-based German entrepreneur who ran a coffee business to talk about management systems. As a “coffee expert” he attracted considerable attention, including requests for autographs, multiple requests for demonstrations on how to make coffee, and even an immigration officer happily noting “Ah! You are the coffee expert!” when he left the country.

As far as we can tell, true entrepreneurs with managerial autonomy comprised a minority of the participants. However, many had aspirations to run businesses someday. Unlike the policy-focused programs we have run in the past, participants also came from more varied personal and educational backgrounds. For instance, quite a number, including some incredible candidates, attended vocational schools instead of universities, whereas in policy-focused programs, most participants come from top universities.

A program cycle starts with short workshops on business topics in North Korea. For the in-country workshops, our main requirement was that we have a large pool of participants, from which we would select only the top participants for an overseas program. In general, we needed 30-40 participants for each in-country workshop. We suggested industries, institutions and demographics participants should or should not come from, and let our North Korean partners put together the pool of candidates based on these suggestions. 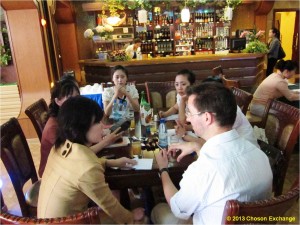 From this pool, we interviewed and selected the top 15-20% of participants for two-week (typically) overseas training components where they would learn from business managers and entrepreneurs about international business standards and innovative business models. An even smaller group of participants were shortlisted for longer-term programs. In all, 18 WIB participants were selected for overseas workshops. When avian flu made us shift one overseas workshop from Shanghai to Singapore, we became worried about cost overruns. Fortunately, the participants were willing to work with us to reduce costs. For instance, while in Singapore, we stayed at hostels, ate hawker fare, and used public transportation to get around the city. Participants even chipped in some of their own money to cover a symbolic portion of their transportation costs to Singapore.

Given the high costs associated with taking a group overseas and our limited budget, the selection process was critical to ensure that the few positions available would be filled with the most qualified candidates. Through interviews, we differentiated between candidates by asking about their future plans, past accomplishments, and learning objectives for a visit to Singapore.

For many, these culturally unfamiliar interview questions put them on the spot. Few were willing to claim any accomplishments, and several stared blankly at us or gave generic answers. I thought the funniest answer was from a woman who claimed to have invented a “new accounting system” and implemented it at her company. Lacking familiarity with North Korean accounting systems, my worst assumptions made me wonder if this meant “cooking the books.” We took her anyway, as she had a clear idea about her career achievements. Our strongest candidates could articulate concrete ideas about their plans for the future, how they wanted to get there, and what they wanted to learn in the process. Unfortunately, a typical candidate pool would have only a few slam-dunks, and a long tail of maybes or rejects. It can be grueling work at times, when one has to sit through the tenth candidate in a row whose vague ambition was to set up a generic restaurant. For a second overseas program, we adjusted down the number of participants due to a shortage of qualified candidates.

Like everything done in the context of North Korea, we were not totally immune from the political context. In August and September, we selected managers from several restaurants for an overseas program that was to take place in November. When some participants were suddenly unable to travel abroad, the program was first delayed to early December, and later cancelled. We were unsure if the disruption was linked to Jang Song Thaek’s purge, but during an emergency Christmas visit, our partners assured us that there is continued interest in our programs.

The Women in Business program is still in its early stage, is small in scale and has dedicated funding only through March 2014. As such, our expectations for its impact are modest. Immediate impact is measured through a survey tracking learning outcomes. We asked participants to rate on a scale of 1 to 10 (where 10 is “strongly agree”) their responses to some questions post-workshop. 8 to 10 are considered positive responses.

While the responses are overwhelmingly positive, we want to see more long-term outcomes. One such outcome is for participants to set up businesses. While we have a few entrepreneurial individuals who have made that leap, many more of them have ideas they are interested in pursuing, but are unable to do so yet. Our surveys indicate that capital appears to be a key restraint on their ability to do so.

For Choson Exchange, once we accept a participant into our overseas programs we are committed to supporting their long-term aspirations. This means, for us, also supporting participation of deserving alumni in future programs. To do this, we are more actively engaging with our alumni, something made easier now that we visit North Korea about once a month. On one trip, we even ran into three alumni just while walking around. Previously, we had to rely on phone calls and emails, which are still an entirely unreliable means of communicating with North Koreans. A key priority for us in the coming months and years is to ensure better support for our alumni through programs customized for their personal learning or entrepreneurial aspirations.

Given the difficulties in raising fresh funds for any program in North Korea, we will be slowing down the Women in Business program in 2014. However, we believe that sustainability is critical for any program to have an impact, and will continue organizing WIB programs at a reduced frequency to maintain continuity. At the same time, we will look at other ways to support our alumni, as well as consider approaches to addressing the capital constraints faced by these would-be entrepreneurs.

Geoffrey, on behalf of the Choson Exchange team and board, would especially like to thank all donors, workshop leaders, partners and volunteers who have made WIB possible. Choson Exchange will be publishing its annual report on its activities, and on the Women in Business program, in February 2014 at www.chosonexchange.org.