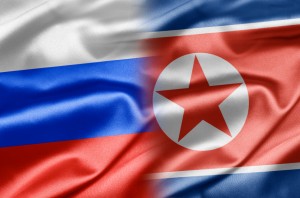 Even last July, during the DPRK’s celebration of the 60th anniversary of the end of the “hot phase” of the Korean War, Moscow demonstrated its negative attitude toward the North’s third nuclear test (conducted in February 2013), as well as its “adventurous” behavior during the acute crisis on the Korean peninsula over the following two months, and maintained only a very modest presence at the anniversary event (the deputy head of its diplomatic mission in Pyongyang). In contrast, China, despite its irritation for the same reasons, sent the third highest ranking member in Beijing’s hierarchy to Pyongyang who was seen at Kim Jong Un’s side throughout the festivities.

What has caused this metamorphosis in Russian-DPRK relations?

First, the North Koreans have exerted a consistent effort to improve bilateral relations with Russia. For example, despite Moscow’s low-level representation at the 60th anniversary celebration, Pyongyang took unprecedented steps during those festivities to demonstrate Pyongyang’s intention to bolster bilateral relations with Russia. Large scale athletic and artistic representations of “Arirang” began with a scene symbolizing friendship between the Russian and Korean peoples, accompanied by a slogan on the “live” platform: “Korean-Russian friendship—From generation to generation.” Even more significant was the episode during the military parade, when (for the first time in history!) the North Koreans acknowledged with gratitude the participation of Soviet troops in the Korean War. A large banner with the image of a Korean soldier, a Chinese volunteer, and what appeared to be a Slavic pilot in a helmet was driven along the stands on a truck. The caption under the banner read: “Thanks to all who fought together with us.”

At a reception on the same day, the DPRK’s Minister of Foreign Affairs, Pak Ui Chun, said directly to his Russian guest: “Did you see the symbol at the parade?… tell your Foreign Minster Sergey Lavrov, that we ‘aren’t hiding anything.’”

It appears that this message was heard in Moscow. In 2014, there has been a flurry of bilateral contacts at a high level. In February, the Chairman of the Presidium of the DPRK’s Supreme People’s Assembly (who is second in command of the state), Kim Yong Nam, traveled to Russia to participate in the opening of the Olympic Games in Sochi and had conversations with President Vladimir Putin and other Russian leaders. In March, Pyongyang was visited by the Russian Republic of Tatarstan President, Rustam Minnihanov, and the Minister of Development for the Far East of the Russian Federation, Alexander Galushka, who also is the new head of the Russian part of the Bilateral Intergovernmental Commission dealing with economic, trade and scientific cooperation. They were accompanied by teams of officials and businessmen.

These visits proved to be very fruitful, and were held in an unprecedentedly open and friendly atmosphere. Both March negotiations resulted in written agreements with the ambitious goal of increasing bilateral trade volume from the current 112 USD million to 1 USD billion by 2020.

Finally, a delegation headed by Russia’s Deputy Prime Minister, which included governors from the three adjacent provinces of Amur, Khabarovsk and Primorye (maritime) Areas, visited the DPRK at the end of April. Mr. Yury Trutnev was received by Kim Yong Nam, as well as the Deputy Prime Minister and Head of the State Planning Committee, Rho Doo Chol. In addition, an inter-regional cooperation agreement was signed for the use of North Korean labor in the agricultural and timber areas of Amur province.

While the atmosphere was friendly, the talks were not easy. The main reason was the North Koreans tried an old Soviet-era approach: since Moscow had recently written off North Korea’s bad debts from that period, Pyongyang requested new credits, a price reduction in Russian goods, and an easing in Russian quality standards for North Korean goods. The Russian delegation tried to explain that the Soviet-era model of cooperation was no longer acceptable and cooperation should be based on market economy principles. The new principles for bilateral cooperation as well as plans for specific tasks will be elaborated at the sixth meeting of the Intergovernmental Commission dealing with economic, trade and scientific cooperation scheduled to take place in Vladivostok at the beginning of June.

At the same time, Moscow has a genuine interest in reducing tensions on the Korean peninsula not only through words but through deeds. One of the vectors of mediation is Russia’s promotion of three major trilateral (RF-DPRK-ROK) infrastructure projects: uniting the railroads in both Koreas with the Transiberian Railway as well as constructing gas pipelines and power lines from Primorye to South Korea through North Korea, in which Russia has already invested significant funds. Moscow is not inclined to underestimate the serious interest of Pyongyang in broadening Russia’s economic presence, including as a means for reducing its one-sided over-reliance on China. In this regard, Moscow also realizes that this “window of opportunity for Russian business will not be open forever, and may quickly slam shut in the event of a change in the foreign policy situation and the large scale arrival of major economic players such as the United States, Japan, South Korea and the European Union in North Korea. After all, there is considerable evidence that even now during a time of harsh economic sanctions imposed by these governments, representatives of their business communities are seeking and finding diverse opportunities to implement projects in North Korea.

One successful effort by the Russian Federation took place in February 2014, when a group of businessmen from South Korea—from Hyundai, the steel giant Posco, and the railroad company Korail—visited the North Korean port of Rajin, where it successfully operates the Russian-North Korean joint venture RasonKonTrans. Last year, the joint venture completed the construction of a modern railway from the Russia-DPRK border to this port and the reconstruction of one of its piers. It is noteworthy that this visit by Southerners to the North was conducted while the law adopted by the previous South Korean administration of President Lee Myung-bak that forbids any trade or economic collaboration with the North was in effect. Regarding this unprecedented trip, the ROK Ministry of Unification issued a special comment that this contact did not represent a repeal of that law, but simply an exception to it. Nevertheless, the meeting in Rajin was considered fruitful by those involved, and this line of inter-Korean cooperation has gained serious prospects for development. The second visit of the same South Korean delegation is scheduled to take place this month.

Russia has also played an important role in promoting a dialog between North and South Korea. This was demonstrated during the visit by Russian President Putin to South Korea in November 2013, when a memorandum of intent was signed by the above-mentioned champions of South Korean businesses wishing to join the activities of the Russian-North Korean joint venture in Rajin. The objective will be to transform this port into an important transshipment hub, a sort of “Rotterdam in Eastern Asia.” This effort, as we see, continues and has good prospects for further development. As a symbolic gesture, representatives from the Russian Federation, the DPRK and the ROK took part in a regular meeting of the “Railroads Cooperation Organizations General Directors” held at the Koryo Hotel in Pyongyang also at the end of last month.

Russia has also been active in efforts to revive the Six Party Talks and in the search for realistic solutions to existing regional security challenges. So far, it does not appear that differences over Ukraine have had any effect on Moscow’s position on these matters. Russia continues to do its best to persuade North Korea to come back to talks and to refrain from new nuclear and missile tests. As for “preconditions” for restarting talks, those may be discussed in a mutually acceptable and face saving manner. Moreover, all parties involved should be prepared to make compromises, not just Pyongyang. One important requirement, however, is that the North reaffirm its commitment to the September 19, 2005 Six Party Joint Statement in which it pledged to denuclearize.

One additional issue that has arisen since 2005 and will require the attention of the international community is North Korea’s development of its own nuclear power plant, the Experimental Light Water Reactor (ELWR) intended for civilian uses. With the construction nearly complete, there are concerns among nuclear engineers that this facility, and any others like it that the North may build in the future, could pose potential safety problems. This danger is particularly pronounced since the reactor has been built without any professional consultation or observation from abroad. As a result, the compliance of this facility with international safety standards—which have been substantially bolstered since the tragedy in Fukushima—cannot help but be held in serious doubt; a danger of significant concern among the North’s neighboring countries, including Russia.

Some experts believe this challenge requires Moscow and others to reexamine the current system of international sanctions on the DPRK, and reformat or “repackage” accordingly.[1] The aim would be to achieve the cooperation of competent international organizations in the field of peaceful nuclear energy with North Korea. Similar precedents have been set in global practice. For example, Pakistan, despite not being a signatory to the Nuclear Non-Proliferation Treaty (NPT), has successfully collaborated with the IAEA in the areas mentioned. Given Russia’s interests, one possible option is for Rosatom, the state nuclear energy corporation, to play a role in such an effort.

It is still an open question whether the current crisis in Ukraine will result in any more substantial shifts in Russian policy towards North Korea, particularly in dealing with the nuclear and missile issues. Certainly, one immediate impact appears to have been the speeding up of plans for bilateral economic cooperation and the exchange of high-level visits that were already in place, perhaps out of appreciation for Pyongyang’s support in the United Nations. Though some would argue that those efforts already undermine policies designed to increase pressure on the North as will a further acceleration in bilateral economic ties

With the West increasing pressure on Russia as a result of differences over Ukraine, the very fact that Moscow and Pyongyang are subject to US sanctions will objectively draw them together (as well as with China). At the same time, Moscow separates the nuclear dimension that relates its obligations and interests concerning the NPT and global non- proliferation regime. On this point, Russia’s stance toward North Korea has not and is unlikely to change.

[1] See for instance, David F. von Hippel and Peter Hayes, “Illustrative Assessment of the Risk of Radiological Release from an Accident at the DPRK LWR at Yongbyon,” NAPSNet Policy Forum, May 6, 2014.