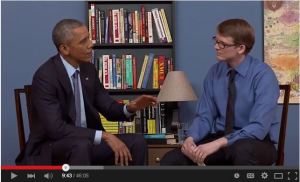 So now we know. The truth is out, from the horse’s mouth. On North Korea and its future, the President of the United States has revealed himself as a card-carrying collapsist. Retro rules.[1]

Ever wondered what lies behind President Barack Obama’s puzzling reluctance to seem to want to do much of anything—be it wield a stick or wave a carrot—about North Korea for the past six years? (That is, till the Sony Pictures hacking spurred him into action and yet more sanctions, even though some experts remain skeptical as to Pyongyang’s culpability on that front.)

Well, the President has finally explained his thinking. If like me you find “Strategic Patience” hard to distinguish from NADA (Not Actually Doing Anything), all is now clear. Like a long line of wishful thinkers before him, he is biding his time for the DPRK’s inevitable collapse.

That revelation came not in his State of the Union address, where Korea went unmentioned, but in an interview for YouTube, of all things. The President took questions from three young websters, on anything and everything. North Korea got two minutes—that bit starts at 8:39—and then Hank Green went to pot: moving seamlessly on to discuss marijuana.

But a very revealing two minutes they were. As widely reported, Obama called North Korea:

“…the most isolated, the most sanctioned, the most cut-off nation on earth…The kind of authoritarianism that exists there, you almost can’t duplicate anywhere else. It’s brutal and it’s oppressive and as a consequence, the country can’t really even feed its own people…Over time you will see a regime like this collapse.”

Why so? “The answer is not going to be a military solution.” Thank goodness for that. Rather,

“We will keep on ratcheting the pressure, but part of what’s happening is that…the Internet, over time is going to be penetrating this country…And it is very hard to sustain that kind of brutal authoritarian regime in this modern world. Information ends up seeping in over time and bringing about change, and that’s something that we are constantly looking for ways to accelerate.”

The prediction, and its rationale, couldn’t be clearer. But are they correct? That I beg to doubt. We’ve been here before—and much good it did us in understanding or changing North Korea.

Back to the Future

So let’s turn the clock back. In 1992, the Economist Intelligence Unit (EIU) published a book-length special report on Korea’s future.[2] Its thesis, summed up in a gung-ho title—Korea’s Coming Reunification: Another East Asian Superpower?—anticipated by more than 20 years the optimism now peddled by President Park Geun-hye, in her striking, if counterintuitive, idea that unification will be a “bonanza” (taebak in Korean). Supremely confident in predicting the future, the author summarized his argument as “a kind of syllogism” in five steps (page 3):

Cue hollow laughter. I wrote those words. They got me invited for two days of one-on-one discussions—and even a TV debate on Japan’s NHK—in Cambridge, where a newly “retired” South Korean politician was taking time out after the presidency had eluded him for a third time. But not even Kim Dae-jung could convince me, back then, that the alternative scenario of a gradual evolution and reconciliation, though obviously preferable in theory, was feasible.

Nor was I alone. ‘Collapsism’—a word I think I coined, in 1993[3] or earlier—was all the rage then, understandably. The collapse of the USSR and of communist regimes in Eastern Europe, plus moves toward capitalism by ruling communist parties in China and Vietnam, left the few communist diehards like Cuba and North Korea looking isolated and exposed. The DPRK in particular, rebarbative and unreconstructed, seemed a dinosaur in a mammals’ world. The fate of Germany looked the obvious template for the Kim regime to do the only thing left, namely to leave the stage. Smug Fukuyama-esque triumphalism blended with wishful thinking: How could anywhere as outmoded and horrible as North Korea possibly survive in the new dawn?

In my case, lingering Marxoid tendencies buttressed this view. The DPRK’s contradictions—relentlessly oppressing its own people while also antagonizing the rest of the world on a myriad fronts—had to be digging its own grave; didn’t it? Hence some combination of external pressure and an internal legitimation crisis was bound to put paid to Kimism, sooner or later.

Sooner became later. Kim Il Sung died, North Korea clung on, and I clung to collapsism. Not dogmatically, but as a result of thinking through the logic and assumptions of that position as well as the alternatives. That remains an essential exercise, even though, with hindsight, my a priori reasoning turns out to have been inductively incorrect. For example, in the 1998 book Economic Integration of the Korean Peninsula edited by Marcus Noland, I had a chapter (available online) bearing the unwieldy if not contradictory title: “North Korea: All Roads Lead to Collapse—All the More Reason to Engage Pyongyang.” The rather convoluted argument included a four-point summary of where gradualism, as I thought then, got it wrong:

Space forbids teasing out where I went wrong on these points in detail. Besides, my views are immaterial. What matters is that influential power holders thought the same and crafted policy accordingly. And remember John Deutch? In 1996, the outgoing head of the CIA confidently told the Senate Intelligence Committee[4] that in North Korea was bound to change in one of three ways, and soon:

“Either it is going to invade the South over one issue or another, or it will break up, or it will collapse internally or implode because of the incredible economic problems that the country faces. Or third, it will over time lead to some peaceful resolution and a reunification with the South.”

And timeframe? Mr. Intelligence was equally cocksure: “… in the next two or three years. It is not something that will go on for decades.”

As the LA Times’ wiser Jim Mann noted at the time, this list “is noteworthy for what it leaves out. Nowhere on it is the possibility that the [four decades-old] status quo…will hold.”

Facing Up to the Facts

Enough of this nonsense. “When the facts change, I change my mind. What do you do, sir?” Sound advice, whether or not Keynes actually said it. I resisted right up until 2009, but finally had to admit the force of Bruce Cumings’ jibe at all of us who thought this way: “When does the statute of limitations run out on being systematically wrong?”[5]

You win, Bruce. This one, anyway. North Korea collapsism has proved a lousy bet for social science and policy making alike, for a quarter century now. Those who still cling to this view would rush to add “—so far.” True, you can never wholly rule out collapse. It remains a possible contingency, for which it is prudent to plan quietly, and making sure to liaise with China. The Park administration’s loud unilateralism meets neither condition, but that’s another story.

Given this long and dubious history, which he may or may not know in any detail, it is truly dismaying to see the President jump so casually onto such a dodgy, discredited bandwagon. Nor does his specific reason convince. There was no Internet when I first became a collapsist, but the impossibility of the DPRK sustaining its information Great Wall against the onslaught of globalised media was always part of the argument. Yet there are few shallower or by now more falsified clichés than the naïve view that the Internet will somehow cause all tyrannies to crumble. Like where and when? Nothing in real life is that simple, or smooth.

It’s high time to acknowledge North Korea’s staying power and plan policy towards it on that basis, rather than wishful thinking. In a few years, the DPRK will surpass the former USSR as the longest-lasting “socialist” state of all time. A regime I thought could not outlive its founder has managed not one but two successions. Those are the facts. How it achieves such staying power would take another article, but I find Heonik Kwon’s “theatre state” concept cogent.

North Korea endures. And it has nukes: a huge failure of international policy, buttressing the survival of this malign regime ad infinitum. It also has protectors in China and Russia, who—again, despite much Western wishful thinking—are not about to abandon it. US policy needs to start from the facts. Hardly less depressing than the DPRK’s unchanging defiance is the no less unreconstructed persistence of a failed policy playbook, despite ample evidence for many years that it doesn’t work. Yet well into the 21st century, not only is the President a collapsist but a usually sane and sensible head of the Council on Foreign Relations has come out as that even older-fashioned and more dangerous harrumphing beast: a regime-changer. Fresh from their triumphs in Iraq, Libya and Syria…We all get fed up with North Korea, but really.

A few final remarks. Obama’s blunt admission gives the lie to past insistence that strategic patience is not based on hostility. (Did he consult his staff, or was all this off the cuff?) The “C-word” has caused a frisson in Seoul, even among conservatives. Park Geun-hye’s Nordpolitik has its own problems, but such directness hardly helps her. Lastly, Obama’s no less frank or even weary admission that “there aren’t that many sanctions left” undercuts the Asherian zeal of the Assistant Secretary for Terrorist Financing (sic; surely against?) in the Department of Treasury. Daniel Glaser told the House Foreign Affairs Committee on January 13, 2015 that the latest North Korea sanctions would have the same “chilling effect” as those against Banco Delta Asia a decade ago. And what a great success that was! State overrode Treasury in hopes of a nuclear deal, and the Kims got their money back—via Russia. Any more bright ideas, gentlemen?

Mr. President, I too was a DPRK collapsist. And look, I have 20-plus years of encrusted egg on my face to prove it. Take it from me: Don’t go there. Think again. Indeed, think outside the box. North Korea will do anything for money. Why not hire a KPA brigade to go kick ISIS ass? A wild idea, sure, but no crazier than some of what’s going around in Washington.

[1] I am grateful to Robert Carlin, John Delury and Joel Wit for several helpful suggestions.

[4] This is curiously missing, unless I am blind, from the Agency’s archive of such speeches and the like for 1996.

[5] For sources and more detailed discussion, see my article “Can North Korea’s second succession succeed?” in the sadly short-lived Korea Review (International Policy Studies Institute, Seoul), special issue on “Post Kim Jong-il North Korea”: Vol. II No. 1, May 2012, pp. 38-62. Available online at http://koreareview.org, though not very straightforwardly. Click on Korea Review2-1 (no 3 of the issues listed), then on Korea Reivew 2-1 PDF.zip (sic). A slow download finally yields the full issue; my article is the third listed: 03_2-1 Can North Korea.pdf.