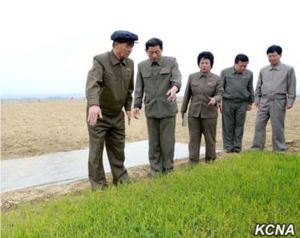 Outsiders are still struggling to decode what is really happening with the economic reforms that have supposedly been underway in North Korea since 2012. As is often the case with the country, no one knows exactly what is happening. Certain experts, for instance, claim that economic reforms have drastically changed conditions for agriculture in North Korea for the better. However, a look at the country’s food production trends gives cause for skepticism.

From 2012 onward, a number of sources both outside and inside of North Korea have reported a gradual implementation of agricultural reforms not dissimilar to those adopted by China in the late 1970s. Supposedly, farmers now get to keep a larger share of their harvests—perhaps as much as 60 percent—and agricultural work teams have been reduced in size to increase their production incentives. Seasoned North Korea watcher Andrei Lankov buoyed the rumors last November, when he claimed that the country had not only implemented such reforms, but had done so with considerable success. He wrote that North Korea had increased its food production in 2013 to such an extent that could nearly “feed itself” that year without international assistance.

It was not surprising that Lankov’s sunny pronouncements raised a lot of eyebrows; as with so much North Korea analysis, his findings did not reflect a clear consensus about what actually happened. It is tempting to take any good news from the country at face value, but there are several reasons to question Lankov’s claim that reforms have led to a better food situation.

First, international estimates of North Korea’s food production showed that it did not suddenly increase in 2013, the year after the reforms were supposedly introduced.

The World Food Programme (WFP) and Food and Agriculture Organization (FAO) typically send experts into the country each year to survey conditions for food production and to estimate its food needs.[1] While Pyongyang did not admit a surveying team in 2014, WFP/FAO Food and Crop Assessments from previous years show a clear pattern: North Korea’s food production was increasing well before rumors of economic reforms began to pour out from its borders. According to the assessments of the past few years, food production began to increase in 2010, going up by approximately 3 percent.[2] In 2011 it continued to climb by about 8 percent.  The growth trend continued in 2012, when food production was estimated to have increased by another 10 percent.[3] Likewise, in an estimate for 2013, the WFP/FAO noted an increase for the third year in a row, a development that had been unprecedented for many years, and concluded that the gap between North Korea’s food need and its production was the smallest in many years.[4]

However, harvest yields in North Korea now appear to have stalled after getting better for some time.[5] According to a recent analysis by the FAO, food production stagnated in 2014, putting an end to the trend of the three preceding years.[6] If Pyongyang has in fact reformed its approach to agriculture, the reported changes do not seem to be doing that much good. Lankov recently admitted in a new piece that the alleged reforms have now stalled or were perhaps reversed, but he has not backtracked on his claim that they worked when they were being implemented.

But North Korea’s food production is shaped by a multitude of factors beyond its agricultural policies, and those other conditions may be partly or fully responsible for the three-year increase in harvest yields. For example, the WFP/FAO notes that North Korea’s weather in 2013 was particularly good for crop growth, with an early period of heavy rain that was “followed by good drying and ripening weather.”[7] Food production is still extremely volatile and vulnerable to unpredictable weather changes, and weather may be responsible even for trends that unfold over several years. North Korea’s improved harvests, then, may simply have been a result of a multi-year streak of good weather, not necessarily an outcome of reforms.

In addition, certain actions by Pyongyang may have increased the country’s official food production figures without boosting the actual size of its harvests. In an analysis of the 2012 WFP/FAO assessment, Marcus Noland notes that the government [in 2011] had increased its procurement price—that is, the amount it pays farmers for their output. The payment increase may have caused more farmers to actually sell more of their production to the state, which they are legally mandated to do, and to illegally divert less into the markets. It is unclear whether Lankov’s 2014 claim referred only to North Korea’s officially recorded harvests or to its harvest as a whole, and that confusion reflects a broader challenge: it is difficult to determine whether apparent increases in North Korean harvests reflect an actual increase in food production, or merely a decrease in the amount of food hidden from public channels.

Meanwhile, North Korea watchers who see evidence of a successful agricultural revamp face an insightful challenge from a commentator who likely has reliable channels inside the country. In an unusually frank op-ed carried by China’s state-run Global Times on May 27, a member of the Chinese state-sponsored Korean Peninsula Research Society laid out a number of reasons why the reported reforms do not go far enough.[8] Analyst Cao Shigong writes that Pyongyang may have tweaked certain policies around the edges, but little has changed in the broader sense—North Korea fundamentally remains a centrally planned economy. No changes have been made in ownership rights, and collective farms are still the model for agriculture. Cao’s article is an authoritative read on North Korea’s economic reforms, from a source that probably has greater insight into the country than many other foreign observers.

With North Korea now only a couple of months away from the annual “lean season,” when its food shortages typically turn especially dire, aid agencies are surely watching the country for signs that any reforms have changed access to food in the country. As they do so, it may be helpful to remember that changes can appear greater than they really are because expectations are so low, and correlation does not imply causation. This is an age-old truth that is often useful to repeat.

It is true that North Korea’s official harvest tallies grew as the country reportedly implemented economic reforms of unclear scope or duration. Yet if Pyongyang indeed adopted such reforms, the changes did not necessarily cause the increase in crop yields, and the government’s harvest records may not even reflect an increase in its actual food production. Even if the country successfully implemented reforms across its territory in 2012 it is doubtful that large-scale results would be visible so quickly. And even if reforms have had a positive impact, it is unclear how much of it stems from the reforms themselves, and how much is simply a continuation of an already existing trend. The bottom line is: North Korea is still waiting for its agricultural revolution.

[5] Food and Agriculture Organization, The Democratic People’s Republic of Korea: Outlook for Food Supply and Demand in 2014/15 (November/October), February 3, 2015, http://www.fao.org/giews/english/shortnews/20150203DPRK.pdf.

[6] Food and Agriculture Organization, The Democratic People’s Republic of Korea: Outlook for Food Supply and Demand in 2014/15 (November/October), February 3, 2015, http://www.fao.org/giews/english/shortnews/20150203DPRK.pdf.