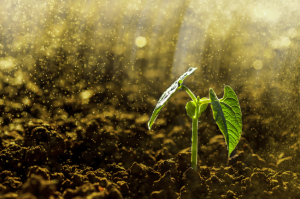 After a month of concern, DPRK farmers have received substantial rains in the last few days, which will at the very least break the current drought. Except for Sinuiju on the Chinese border, weather stations in the western farming region have reported between 3.5 and 7.5 inches of rain between July 10 and 14, with similar amounts falling in Kangwon province.

This is very good news, and will provide adequate moisture for the main crops for the immediate future. The next week is expected to be dry, but another smaller weather system is expected over the weekend. If rainfall for the remainder of the year is at or near normal amounts, adverse effects of the recent dry months will be limited. But July rainfall is still less than half of normal, and crops will need substantial rain into August to insure normal development.

Some damage is irreversible. The winter and spring crops (wheat, barley and spring potatoes) were adversely affected by the dry March and rainfall of around half of what is normal in May. The FAO has estimated a reduction of about 25 percent or around 68,000 Metric tons cereal equivalent for the spring harvest.[1] This affects food availability during the critical “lean season” leading up to the main harvest in September, but amounts to only just over 1 percent of the total annual production of approximately 5 million MT in recent years.

More significantly, the main crop has also been affected. The area planted to rice is about 5 percent below expectations, with most of the reduction in North and South Hwanghae provinces. The full area of maize was planted, but yield will undoubtedly be reduced because of water stress during the past two months. Precise estimates of the overall production loss are very premature, but somewhere around 5 to 10 percent would not be unreasonable.

What this all means is that the DPRK could experience another half million MT grain shortage below minimum consumption requirements, creating more challenges for Pyongyang. In most other developed economies this could be met by spending a couple hundred million dollars on increased commercial imports,[2] but the DPRK government has not done that in the past and there is no reason to expect it will this year.[3] There is some indication that aid from China and South Korea may be offered. The increased role of the markets may also provide a route for private food imports (at least for those who can pay for them), but not in the aggregate quantity that will be needed. Non-farm households that have not developed alternative sources of income in the last several years are likely facing another year of food shortages.

This assumes that rains continue. Another prolonged dry spell of two weeks or more before mid-September would reduce yields even further, and after a dry 2014, the country still needs plenty of rain to replenish the reservoirs, both for irrigation and power generation.

Recent changes in farm policy are not likely to affect production significantly this year. Farmers are now organized in small sub-work teams and were promised the ability to keep or sell 60 percent of their crop.  They may be more motivated, and increased privatization of the harvest may stimulate greater care and consequent reductions in the historically high post-harvest crop losses. But until they have had at least a year to invest any new profit in productivity-enhancing equipment or supplies they are still working with very limited resources. Away from the farms, however, the DPRK population will not quietly stay home and starve as they did in the 1990s. The market economy is widespread, everyone knows the Public Distribution System is ineffective and a multiplicity of individual coping actions will go into play. There will surely be hardship, but at the current anticipated shortfall a widespread famine is unlikely.

For now, North Korean farmers can take a breath of relief. The drought has ended, and while the future is uncertain as always, the imminent threat of a widespread crop failure has been lifted.