Chickens come home to roost, the swallows return to Capistrano, and years of Washington and Seoul misreading signals from North Korea have helped fuel black storm clouds on the horizon. The situation on the Korean peninsula is not just bad; it is getting worse at an ever-faster pace. 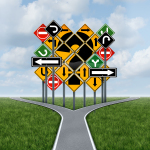 How could this happen? For a moment, forget the big-picture policy issues, even the pressing question of whether the North will give up its nuclear weapons. Set aside all the common wisdom you “know” about the North. Go back to basics, to the first order question: Is it possible to separate serious North Korean signals about policy from routine propaganda? That answer has to precede addressing the second question: What do we do about a North Korean proposal if we get one?

There is probably no single area in which Americans are more prone to trip over themselves than in trying to understand what appears in controlled media like that in North Korea. The tools needed are not new or arcane. Nor are they the domain of a high priesthood. Fundamentally, what is required is intellectual discipline and honesty coupled with an openness to learn and relearn how the regime in Pyongyang functions. Admittedly, this is not a job for the faint hearted or those with short attention spans. It takes time and concentration.

Probably the best methodology supporting effective analysis of controlled media has been refined through constant testing over 70 years. For anyone interested, look at Donald Zagoria’s Sino-Soviet Conflict, 1956-1961 or Richard Wich’s Sino-Soviet Crisis Politics: A Study of Political Change and Communication. Too busy for that? Then get hold of decades of unclassified analysis from the government’s Foreign Broadcast Information Service, which once upon a time, had a small, distinguished, expert team, called the Analysis Group. This group devoted full-time attention to media from the USSR, China, Eastern Europe, Cuba, Vietnam and North Korea.

It was the methodology and systematic approach refined over many decades by this analysis group that had a role in guiding Washington—over the frequent, loud objections from parts of the intelligence community which knew a lot less than it thought it did about the North’s position based on classified information—into the most productive period the US has had dealing with the DPRK, i.e., the years from 1993-2000. Even then, not everything was smooth as silk.

In large part, it has been the failure since 2001 to apply that same, careful approach to interpreting Pyongyang’s signals that has led us to the dangerous situation we are in today. By now it is baked into the common wisdom that the North will “never” give up its nuclear weapons, and thus there is no sense in exploring what might be possible even if Pyongyang appears to signal a willingness to negotiate. The default approach has become: They didn’t mean it…now, what did they say?

In virtually all cases, quickly rejecting high-level North Korean statements that have the hallmarks of policy initiatives (as the US did in January 2015 and July 2016) suggests to Pyongyang that there has been no serious analysis, and that there is no commitment on Washington’s part to considering new ideas. Even worse, it completely forecloses the possibility of the second crucial second step—probing to see where things might lead, or might be led.

And where might they lead? Much of the time, we don’t actually know at the outset; all we know is that there is an opening to be probed. In May 1993, when a US delegation sat down with the North Koreans in New York, no one—including those on the DPRK side—had any idea that 18 months later we would end up with an Agreed Framework that froze the North’s fissile material production program for eight years (October 1994-January 2003) and resulted in the scrapping of a nearly-complete, large plutonium production reactor; provided the conditions in which it became possible to put in place a missile launch moratorium that lasted for seven years (1999-2006); opened the way to the signing of a joint statement on terrorism (September 2000); facilitated an exchange of high-level visits between the two sides in October 2000 which, among other things, moved the situation to the edge of a larger, more comprehensive deal on the North Korean missile program.

The US could not have reached, must less have sustained, this level of progress over so many years without a good understanding of what Pyongyang meant by what it said, and an ever-improving grasp of where what the North said might lead through further exploration.

The signals from controlled media—and especially from North Korea—were never easy to read, if “easy” meant plain to see and needing minimal interpretation to understand. It is no easier—but certainly no harder—today than it ever has been. The array of signaling mechanisms from Pyongyang has never been rigid or fixed. New elements are added while old ones fall away. Yet the fundamentals have remained the same, and the essence of the methodology is still applicable.

Initially, when there was no official contact between the US and Pyongyang, the analysis of the North’s public statements was difficult because there was no way to test the conclusions, and thus no way to refine and sharpen the analytical tools. In the late 1980s and 1990s, however, with increased contacts leading to hundreds of hours of formal and informal discussions between US and DPRK officials, it became possible to refine the methodology further, to test propositions, and to hear the signals through a variety of channels, both public and private. In that particular case, it became clear that the last two usually work together, though not always in a straight-line fashion. Sometimes public and private signals directly reinforced each other; other times, they had different but complementary functions. At crucial junctures, it gradually became clear that a message in one channel (often the private one) could be tough while the other (the public) might be calculated to create nuanced space for flexibility later on.

Observers who think it possible to discern North Korean intentions on the basis of a single public (or private) utterance have no idea what they are talking about. Every important North Korean statement or commentary has a historical context within which it must be read. Such statements do not emerge nor are they composed in a vacuum. Policy relevant pronouncements need to be analyzed in context and against historical precedent. They cannot simply be read literally. What seems on the surface to be a flat negative may, when compared against previous statements, actually be much less negative. Silence may speak volumes in the right circumstances. The absence of what had previously been a routine formulation can signal a significant shift in approach.

The best analysis of the North’s public signals highlights opportunities; it does not make predictions. The North Koreans tend to be reactive, and in a large sense policy-passive. When they persist with a particular theme indicating a willingness to engage on a serious issue, that persistence itself can be an important indicator.

Last autumn, DPRK media carried a large number of official statements and newspaper commentaries focused on the relationship between a peace agreement to replace the Korean Armistice Agreement and US demands for the North’s denuclearization. The easiest reading was that the North was arguing that it would not abandon its nuclear weapons and sought to push aside that issue by beating the drums on a peace agreement. The more accurate interpretation was that this represented an effort to engage the US by deliberately and persistently suggesting that the nuclear issue was not off the table, but that there had to be consideration of the linkage. In essence, it was a signal that this was as much a problem of sequence as of substance.

Things were cut short in November when the leadership in Pyongyang lost patience with the preliminary back-and-forth and, in what has become a hallmark of Kim Jong Un’s leadership style, ordered a “shortcut,” i.e., to stop talking endlessly with the Americans to no avail and move on to the fourth nuclear test.

The bromide that “actions speak louder than words” is too easily misapplied to North Korea. The language the North employs, especially in high-level statements, matters. In effect, it represents a form of action, policy formulation at the highest levels of the regime. Windows of opportunity have always regularly opened and closed for dealing with the North. When they are open, it is crucial to be ready to move quickly. Looking carefully at North Korean signals at such times is not being gullible, but dismissing them out of hand is as dangerous as it is foolish.