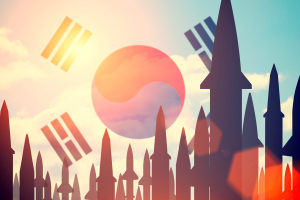 This is the first of a four-part series on what a Trump presidency could mean for US policy toward North Korea.

One of the strangest aspects of the campaign that led to the election of Donald Trump as the next President of the United States was his repeated references to the possibility of letting Japan and South Korea build their own nuclear weapons in response to North Korea’s nuclear program.

Trump later denied that he made those comments—on Twitter of all places!—but he did say it. In fact, he raised the possibility on three separate occasions.

The issue first came up in March in an interview with David Sanger and Maggie Haberman in the New York Times. According to Sanger and Haberman, Trump “said he would be open to allowing Japan and South Korea to build their own nuclear arsenals rather than depend on the American nuclear umbrella for their protection against North Korea and China.” Trump also said—and this is important—that “he would be willing to withdraw United States forces from both Japan and South Korea if they did not substantially increase their contributions to the costs of housing and feeding those troops.”

This was big news in the United States, so Trump was asked about the comment repeatedly, giving him opportunities to elaborate. CNN’s Anderson Cooper asked Trump about the comment a few weeks later. Trump explained that the United States is “supporting [our allies], militarily, and [they] pay us a fraction, a fraction of what they should be paying us and of the cost. … We’re supporting South Korea. I order thousands of television sets because I am in the real estate business, you know, in my other life, OK.”

Trump went on to say that he hates nuclear proliferation, but “at some point we have to say, you know what, … we’re better off, frankly, if South Korea is going to start to protect itself …”

Trump also raised the issue during a campaign rally in Wisconsin in April, where he again raised the threat from North Korea, suggested South Korea and Japan need to pay more to the United States for defense, and even suggested that Japan could defend itself against a North Korea, stating as an aside, “if they fight, that would be a terrible thing… Good luck folks, enjoy yourself… but if they do they do.”

So what was Trump getting at? Trump’s primary point is not that South Korea should build nuclear weapons. Here is a crucial clarification—every time Trump has mentioned Japan or South Korea building nuclear weapons, it has been in the context of demanding that both countries pay the United States more for the forward basing of US forces. In essence, he’s shaking down Tokyo and Seoul. That’s why he mentions how many televisions South Korea makes—he is like a gangster collecting a debt. Obviously, the objection to treating alliances like a protection racket is that the allies might choose to defend themselves rather than pay more, including the possibility of building their own nuclear weapons. To which, Trump’s response is that of a racketeer: Go ahead and build nuclear weapons. You’ll probably die in a nuclear war. Go ahead folks, enjoy yourself.

This is why Trump keeps denying he said South Korea should build the bomb. In his mind, what he said was South Korea should pay more. The rest of it was bluster. In other interviews, such as this one with Chris Matthews, when asked about previous statements that South Korea and Japan should develop nuclear weapons capabilities, Trump responded: “No, what I said is, ‘I’ll keep it the way it is but they have to pay their fair share.’” He then went on to talk again about how many television sets South Korea makes.

It is worth noting, by the way, that South Korea and Japan already pay quite a lot to offset the cost of the US forces based in both countries. Good data on how much each pays is hard to find, in part, because much of the support is in the form of in-kind contributions. The US Department of Defense used to publish estimates every year in a report called Allied Contributions to the Common Defense. Japan offsets about 70 percent of the cost of US forces in Japan, while South Korea historically offset about 40 percent. South Korea’s contribution has increased in recent years, with the signing of an agreement in 2014 that brought the South Korean contribution up to about half of the hosting costs.

There is, of course, some dark humor in the fact that the President-elect criticized the current President for not getting South Korea to pay more, when, in fact, the Obama Administration just got South Korea to pay more during President Park’s term. But it is perhaps indicative of the coming disaster in alliance relations that Trump is unaware of the bruising political battle in the National Assembly over the Special Measures Agreement, with opposition lawmakers calling it “humiliating.”

Ultimately, this is the real danger posed by Trump’s attempt to shake down our allies in Seoul. While he might think the threat of a South Korean bomb is just a bluff, he may very well succeed in doing enough damage to the alliance that Seoul goes its own way, building nuclear weapons along with the televisions that Trump keeps bringing up.

Over the past few years, there have been signs that a growing number of South Koreans are chafing at the restrictions that come with the US alliance. In 2012, for instance, Seoul finally won further relief from long-standing limitations that the United States had imposed on the South Korean missile program in exchange for technical assistance. South Korea can now build missiles with a range of up to 800 km—enough to cover all of North Korea.

There are also frequent calls in South Korea for Seoul to develop its own nuclear weapons. South Korea had a nuclear weapons program in the 1970s under the current President’s father, Park Chung-hee. As to when that program ended, your guess is as good as Alex Lanoszka’s. But the IAEA found safeguards violations that occurred as recently as February 2000.

South Korean National Assemblyman Chung Mong-joon, for instance, who alternately wanted to be President of South Korea and FIFA, gave a speech at the Carnegie Endowment’s 2013 Nuclear Policy Conference arguing that South Korea should temporarily withdraw from the Nuclear Nonproliferation Treaty (NPT) in order to pursue a nuclear weapons program in lock step with North Korea’s. No word on whether he also wants soccer’s governing body to get the bomb. And recently, a South Korean professor published a popular book in South Korea called “우리도핵을갖자” (“Let’s Go Nuclear!”). The professor, Song Dae-sung makes a sustained argument for South Korea’s building nuclear weapons to respond to North Korea’s nuclear program and conventional provocations. Public opinion polls have also consistently shown that about half of South Koreans think arming themselves with nuclear weapons is an appropriate response to the North’s growing arsenal. While talk is cheap—and many people haven’t considered the full ramifications of withdrawing from the NPT and building nuclear weapons—the simple fact is that Seoul’s nuclear option is not completely taboo. The coalition of people opposing a South Korean bomb is winning for the moment, but there is no guarantee that view will prevail indefinitely. And ultimately, Trump’s careless threats may tip the balance.