Recent reporting has raised the specter of a future North Korean nuclear test triggering a catastrophic volcanic eruption from the nearby volcano, Mt. Paektu (or Baekdu), which spans the North Korean/Chinese border northwest of the underground nuclear test site at Punggye-ri.[1] This reporting is somewhat reminiscent of previous concerns linking the most recent nuclear test on September 9, 2016 with a magnitude 5.8 earthquake three days later in South Korea, 800 kilometers from the test site (and which was one of the strongest earthquakes in South Korea since 1978).[2] Such fear-inciting reporting spreads like wildfire, and can quickly become gospel without adequate scientific scrutiny. While it might, at first, seem reasonable to derive cause and effect between nuclear testing and natural earth movements, closer inspection of the comparative scales of these events, along with a review of past US nuclear test experience in similar geologic environments, suggests that the likelihood of any such a connection is extremely remote.

North Korea’s Punggye-ri Nuclear Test Site test site is located 114 kilometers southeast of Mt. Paektu (2744 m), a sacred and symbolic site for North Koreans, where Kim Il Sung fought the Japanese during World War II and Kim Jong Il was reportedly born. Mt Paektu (also known as Mt. Changbai in China) did have an extremely violent eruption roughly 1,000 years ago, with smaller ones in 1903. Given this history, Mt. Paektu can be likened to Mt. St. Helens in the US northwest. Both are “stratovolcanoes,” which due to the generally higher viscosity of their lava can allow gas pressures to build up and often produce explosive eruptions.

Volcanologists have deduced that Mt. Paektu is similarly capable of erupting violently once again, potentially at any time.[3] There is evidence that the magma chamber under Mt. Paektu was filling again during 2002-2005 based on the recorded increase of numerous small tremors at that time, which subsequently decreased. To date, there has not yet been any clear evidence that an eruption is imminent.[4] Interestingly, Mt. Mantap (2,205 m), the highest point within North Korea’s Punggye-ri Nuclear Test Site, is capped by both basalt (a lava flow) and 200 meters of airborne volcanic deposits, the latter derived from past eruptions traced back to Mt. Paektu.

Figure 1. Mt. Paektu (at 2,744 meters, the highest point in North Korea) is a stratovolcano with a lake-filled caldera. 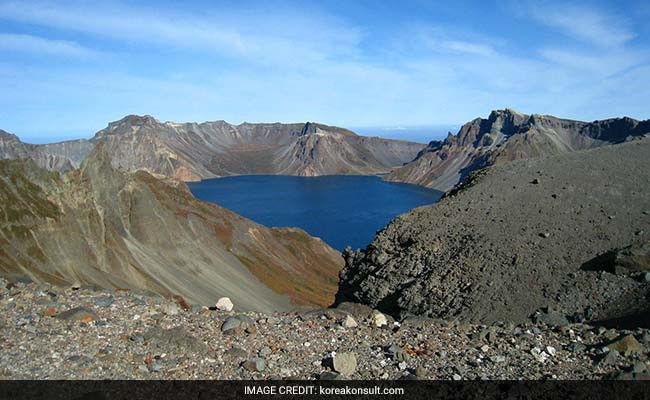 It is instructive to review past nuclear test experience by the United States to see if there is any evidence of such a causal relationship between nuclear testing and volcanism. The Nevada Nuclear Test Site (NTS) is located in a somewhat comparable geologic and tectonic setting as that of Punggye-ri, an area of previous volcanism but one with a considerably longer history of nuclear testing. The NTS was the location of 921out of the 1,021 underground nuclear tests conducted by the United States (the remainder being atmospheric tests). Beyond the significantly greater number of tests than the five conducted to date by North Korea, the yields of those tests in a few cases exceeded one megaton (1,000 kilotons), which exceed by more than 50 times that of the maximum yield of North Korea’s five underground tests (15-20 kilotons was the largest event to date).

The NTS is located 289 kilometers southeast of Mammoth Mountain on the rim of the massive Long Valley Caldera, one of the largest volcanic calderas on earth.[5] Portions of the test site are also covered by a sequence of airborne volcanic deposits (tertiary volcanic tuffs) and basalts. The site is closer to a number of other areas of volcanism, being just 79 kilometers southeast of the Timber Mountain volcanic area. Timber Mountain’s eruptive history consisted of three episodes: 12 to 8.5 million years ago, 9.0 to 6.5 million years ago, and 3.7 million to less than 10,000 years ago.

Despite decades of very high yield underground nuclear testing at NTS, at no time was there any hint of an induced volcanic eruption.

What About Nuclear Testing Triggering Earthquakes?

The United States Geological Survey (USGS) has reviewed previous concerns raised in 1969 about the possibility of large NTS nuclear explosions subsequently triggering damaging earthquakes in California. According to that review, the research found no obvious correlation, and moreover found that the results were also “in agreement with theoretical calculations that transient strain from underground thermonuclear explosions is not sufficiently large to trigger fault rupture at distances beyond a few tens of kilometers from the shot point.”[6]

Perhaps most significant for this review is that the USGS also noted that “the largest underground thermonuclear tests conducted by the US were detonated in Amchitka at the western end of the Aleutian Islands and the largest of these was the 5 megaton codename Cannikin test which occurred on November 6, 1971. Cannikin had a body wave magnitude of 6.9 and it did not trigger any earthquakes in the seismically active Aleutian Islands.”[7]

The Aleutian Islands make up a volcanic arc consisting of 62 active and dormant volcanoes. If ever there would have been an opportunity to show a causal relationship between nuclear testing and induced volcanism, that would have been it. However, just as there were no earthquakes generated by those high yield nuclear tests, there were also no volcanic eruptions following even the largest Cannikin test, despite the fact that there were at least three active volcanoes (e.g., Little Sitkin Island’s stratovolcano erupted as recently as 1900) that are all less than 90 kilometers from the shot point.

A review of the previous US underground nuclear test experience provides sufficient insights on the question of a possible causal relationship with induced volcanism and/or earthquakes. That review shows that there is simply no valid basis to expect that any underground nuclear test that could be conducted by North Korea and contained within the geologic setting of the Punggye-ri Nuclear Test Site[8] could trigger a subsequent eruption of the Mt. Paektu volcano located 114 kilometers away.

[7] IBID. Note that another report states that the “official yield” of the Cannikin test was “less than five megatons” http://bssa.geoscienceworld.org/content/67/1/245 which suggests that it must have been close to that yield.